Gov. Gavin Newsom enlisted some influential allies on Tuesday to mark the end of 15 grinding months of California coronavirus restrictions.
“Is that Optimus Prime?” the Democratic governor asked. “It is a privilege to stand by your side,” the anthrop… 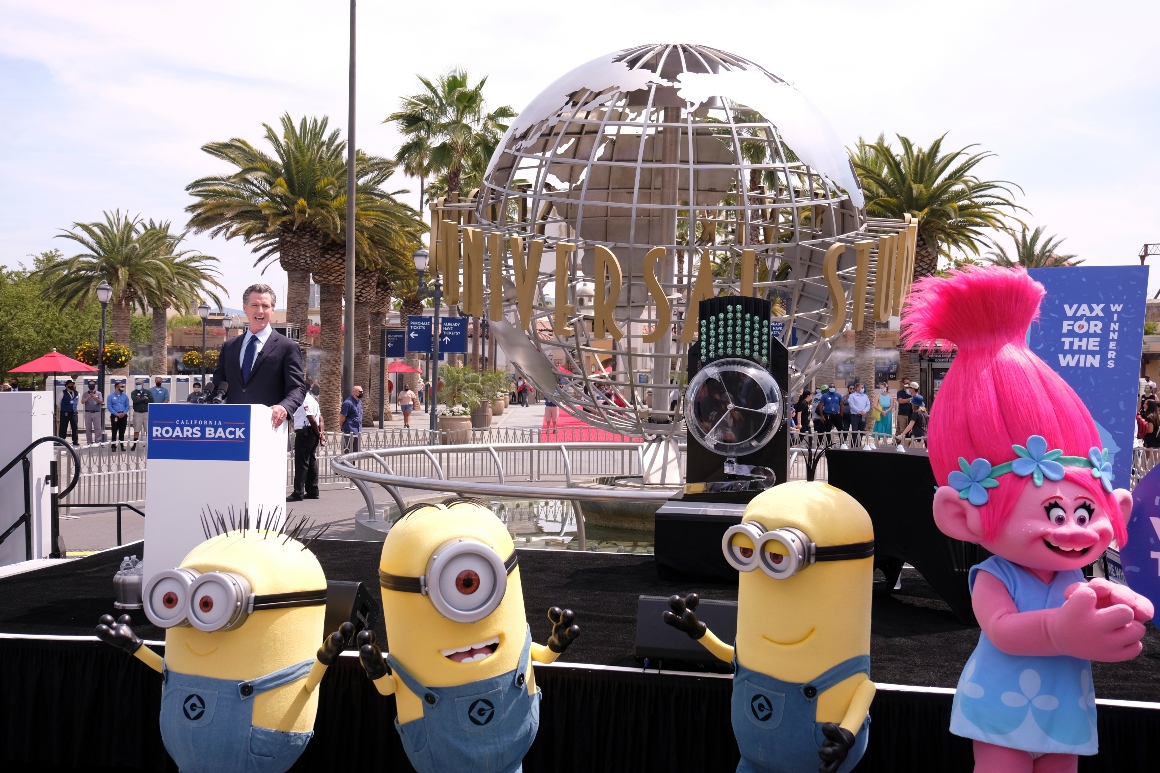 Gov. Gavin Newsom enlisted some influential allies on Tuesday to mark the end of 15 grinding months of California coronavirus restrictions.

“Is that Optimus Prime?” the Democratic governor asked. “It is a privilege to stand by your side,” the anthropomorphic Transformer boomed out in reply outside Universal Studios Hollywood.

Overalls-wearing Minions and an iridescent-haired Troll — popular animated movie characters — frolicked in front of Newsom as the governor soberly recounted the progress California has made in vanquishing the coronavirus, allowing the state to dismantle a system of tiered rules on various businesses. The governor has gone on a daily promotional tour around the state as he fends off a recall threat.

Starting Tuesday, restaurants, bars and retailers are allowed to operate again at full capacity and without social distancing restrictions, while patrons can go unmasked if they are vaccinated. Major League Baseball teams are already selling tickets in preparation for full capacity reopening this month. Disneyland, Universal Studios and other theme parks are relaxing restrictions as they welcome back more visitors.

On the East Coast, New York Gov. Andrew Cuomo made a similar reopening announcement to a packed, unmasked crowd at One World Trade Center on Tuesday. The state ended all of its capacity, social distancing and disinfecting requirements, among other measures.

The pandemic has plunged Newsom into the most trying stretch of his often-charmed political life. After he surged in the polls on the strength of his early move to lock down the state, the governor’s standing plunged as Californians wearied of restrictions and Newsom made the ill-advised decision to attend a top adviser’s birthday party at an opulent restaurant even as he urged residents not to gather. Voter frustration propelled a long-shot recall to qualification.

READ:  Jill Biden's chief of staff is the president's pick to be ambassador to Spain

The governor of America’s most populous state embraced some unabashed political gimmickry Tuesday as he pushed to get more Californians to get their vaccines. Newsom chose to celebrate the occasion at the famous California tourist destination and channeled his inner game show host as he announced which Californians would win $1.5 million apiece in a lottery for vaccinated residents.

Amid that turbulence, Newsom has never appeared happier than during the "Vax for the Win" giveaways. He beamed as he shouted out the counties where winners reside. He eventually had to turn to tougher stuff, fielding questions from reporters about whether California might need to reimpose restrictions. Health officials believe the emerging Delta variant could soon become the dominant strain in the U.S. and cause outbreaks among unvaccinated residents.

But Newsom concluded his event on a high note. Blue confetti blasted as Newsom was joined by movie characters including his "personal negotiator," Optimus Prime.

"Today's about reaching out the serendipity of life — meeting strangers, having the opportunity to experience all the wonders of the world that are here at Universal Studios," Newsom said. "Today’s a day to celebrate the incredible journey we’ve been on over the course of the last 15 months."