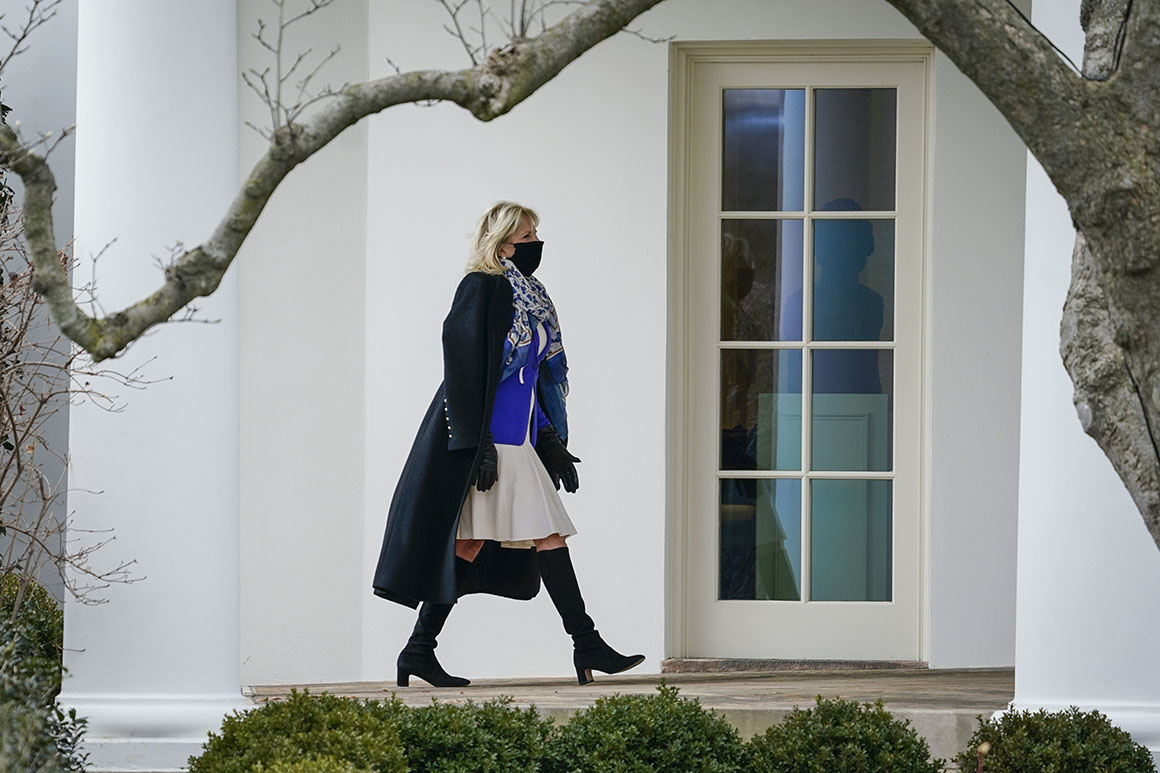 BURLINGTON, N.J. — A rubber-floored playground outside an elementary school in a small city in central New Jersey may not seem like the most traditional of political settings. But on a windy, cold afternoon on Monday, it was the spot where the Biden administration chose to begin its salesmanship of the most ambitious piece of legislation in at least a decade.

There, outside Samuel Smith Elementary School, First Lady Jill Biden told a small crowd of school board members, elementary school teachers and members of the New Jersey congressional delegation that help was on the way. And if they had trouble hearing it over the wind, a sign in all caps was there, on the lectern, to remind them: “Help is Here Tour.”

The first lady was in town to tour the school, where about half of students are attending virtually and the other half in person two days a week in two shifts. Smith is in one of the more than 500 school districts in the state that are still in some type of hybrid model. And, for the purposes of the Biden administration, it served as a canvas upon which they could draw a future free of the pandemic. The first lady was one of three administration principals to hit the road to sell the $1.9 trillion Covid-relief bill that the president signed into law on March 11. Samuel Smith Elementary was the first of all their stops.

That the Biden administration would choose a school as a setting and the first lady as its primary surrogate for the opening pitch of their ambitious sales effort was no coincidence.

Biden has been a teacher for three decades and continues to teach while serving as first lady, which makes her uniquely suited for touting the more than $128 billion being sent to local and state agencies for schools. And the administration knows it.

“She’s an effective promoter of her husband’s work and doing that at schools and seeing different approaches to safe reopenings makes perfect sense,” a White House aide told POLITICO. Wednesday, she’ll be dispatched to New Hampshire where she’ll get a peek at how the Christa McAuliffe School in Concord is maneuvering the pandemic.

School reopenings have been the most politically vulnerable element of the White House’s response to the pandemic. Confusion over the administration’s guidelines and metrics has been a persistent theme two-and-a-half months in. Even what a “reopened” school looks like is unclear.

Samuel Smith Elementary is a microcosm of how Covid-19 has ravaged the nation’s education system. To get inside the building, Biden walked through a thermometer check station that resembled a metal detector, saw a very empty cafeteria and said hello to 17 excited kids sitting at home while two others were in class on laptops surrounded by plexiglass. The entire time, the message was clear: Things may be miserable right now, but when the money in the bill gets out to the schools, it will all begin to change.

Biden herself put it much more delicately. “Even with your best efforts, students can’t come in every day. And this school, like schools across the country, can’t fully reopen without help. So today, I’m here to tell you: With the American Rescue Plan, help is here. We’re going to open schools — and we’re going to do it safely,” she said.

Republicans have been unrelenting in their attacks on the administration for compromising on its promise to open schools in its first 100 days. And, in recent days, the administration has sought to clarify its positions, going so far as to suggest that it is revisiting some of the guidance on how far students would have to sit away from each other. It comes after a new study found students may only need three feet of distance instead of the currently recommended six.

“We’re looking at this carefully,” Centers for Disease Control and Prevention Director Rochelle Walensky told reporters. “As soon as we put out our guidance, among the biggest challenges that we were aware of was the fact that schools were having a hard time with the six foot guidance, and that, of course, prompted more studies to say: Is six feet necessary in the context of mask wearing? We’re taking all of those data carefully and revisiting our guidances in that context.”

Monday’s visit was a chance to recast the debate away from questions about priorities and the influence of teacher’s unions and onto the avalanche of resources tucked into the relief bill President Joe Biden signed into law.

The first lady’s tour was part of a larger coordinated and carefully planned campaign to own the bill’s narrative; or, as Vice President Kamala Harris put it on her swing through Nevada Monday, to give folks a lowdown on what is actually in the bill and what they are going to be getting out of it.

Hundreds of miles from central New Jersey, Harris visited a vaccination site at the University of Nevada-Las Vegas where she chatted with a nursing student as the student received a shot in her arm. Then she popped by a plant-based taco joint for lunch telling the workers that small businesses are the “life blood of the economy.”

“Know that you're entitled to this, file your taxes so that you can speed up the benefits that you're going to receive, to talk to your friends and neighbors about getting vaccinations because we are speeding up the delivery and supply of vaccinations at sites like UNLV,” Harris told reporters.

READ:  Giuliani denies report that he discussed pardon with Trump

Harris’ husband, Doug Emhoff, got a tour of a Las Vegas food bank where the president told him he’d “come to the right place to start your tour because this is ground zero for the wrecking ball of Covid.”

The president stayed at the White House on Monday. But he didn’t leave the salesmanship entirely to others. He gave remarks on implementation of the bill, and announced Covid czar Gene Sperling. On Tuesday, he’s headed to Pennsylvania, while his veep will hit Denver. Wednesday, Emhoff will be in Albuquerque. The president and vice president will close out the week in Georgia — the state whose Senate elections in January gave Democrats the majority in the Senate and, with it, the votes to pass a relief bill of such scope.

Standing behind a lectern of his own — this one adorned with the presidential seal, not a “Help is Here Tour” logo — Biden tried his own soundbites for the sales job to come.

The administration, he proclaimed, is getting “shots in arms and money in pockets.”