The former president said Wednesday he’s backing Brooks, who spoke at the Jan. 6 rally against the election results, in next year’s GOP Senate primary. 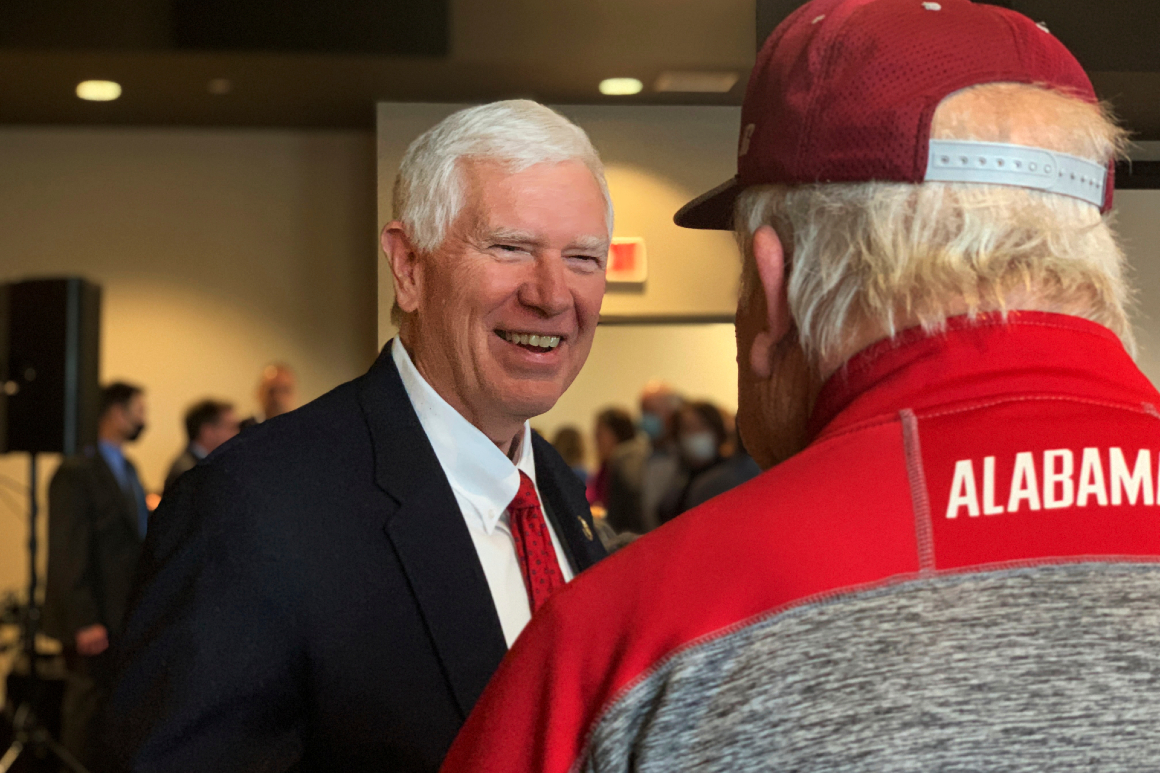 Former President Donald Trump is endorsing Rep. Mo Brooks in the Alabama Senate race, a nod that could dramatically reshape next year's GOP primary for the state's open seat.

“Few Republicans have as much COURAGE and FIGHT as Alabama Congressman Mo Brooks,” Trump said in a statement to be released Wednesday morning, adding that Brooks is “a great Conservative Republican leader, who will stand up for America First no matter what obstacles the Fake News Media, RINOs, or Socialist Democrats may place in his path.”

Trump added that Brooks “has my Complete and Total Endorsement.”

In a state where Trump received more than 60 percent of the vote, his endorsement was widely sought after. Brooks and his rival, businesswoman Lynda Blanchard, had aggressively lobbied for the former president’s backing.

It’s a blow to Blanchard, who has been touting her past role as U.S. ambassador to Slovenia and already committed to spending $5 million of her own fortune on the race. Blanchard, who has donated extensively to Trump, launched her campaign last month with an advertisement in which she described herself as a “proud member of the MAGA movement.” The spot featured an image of her pickup truck, emblazoned with a Trump bumper sticker.

But Blanchard insisted she had no plans to drop out of the race, saying in a statement that she was "steadfast in my commitment to this race, to the people of Alabama and in my support of President Donald J. Trump."

"I have been unwavering in my support of President Trump since the day he came down the escalator in June 2015. He is the greatest president of my lifetime, and I intend to go to Washington as the United States Senator from Alabama to represent the America First agenda that President Trump championed every day," Blanchard said.

Brooks, who was first elected to the House in 2010, became a staunch Trump ally. The congressman was a speaker at the pro-Trump Jan. 6 rally that preceded the Capitol riot. Brooks, 66, urged the crowd to "start taking down names and kicking ass."

He has drawn the support of Trump adviser Stephen Miller, who joined Brooks at his campaign launch last month. Miller is a former aide to former Sen. Jeff Sessions (R-Ala.).

The two candidates are running to replace retiring Republican Sen. Richard Shelby, who has held the seat since 1987. Trump’s endorsement could dissuade other would-be candidates from getting in the race. The list of potential contenders includes former Shelby chief of staff Katie Britt, Secretary of State John Merrill, and state Senate President Pro Tempore Del Marsh.

The former president has relished his role as GOP kingmaker, bestowing his imprimatur on 2022 contenders who’ve demonstrated the utmost fealty. Trump's endorsements in next year's Senate races thus far have gone to entrenched GOP incumbents who supported his agenda, including Sens. Tim Scott of South Carolina, Mike Crapo of Idaho and John Kennedy of Louisiana.

But Trump’s Alabama endorsement may not necessarily seal Brooks’ victory. During a 2017 special election to replace Sessions, Trump initially endorsed and campaigned for former interim Sen. Luther Strange, who went on to lose the Republican nomination to former state Supreme Court Chief Justice Roy Moore. Trump then endorsed Moore — who had been accused of sexual misconduct with minors — in the closing days of the race against Democrat Doug Jones, which Jones won narrowly.

READ:  CDC broadens definition of who's at risk of getting coronavirus