The pugilists appeal to a crucial demographic the president is trying to turn out in force. 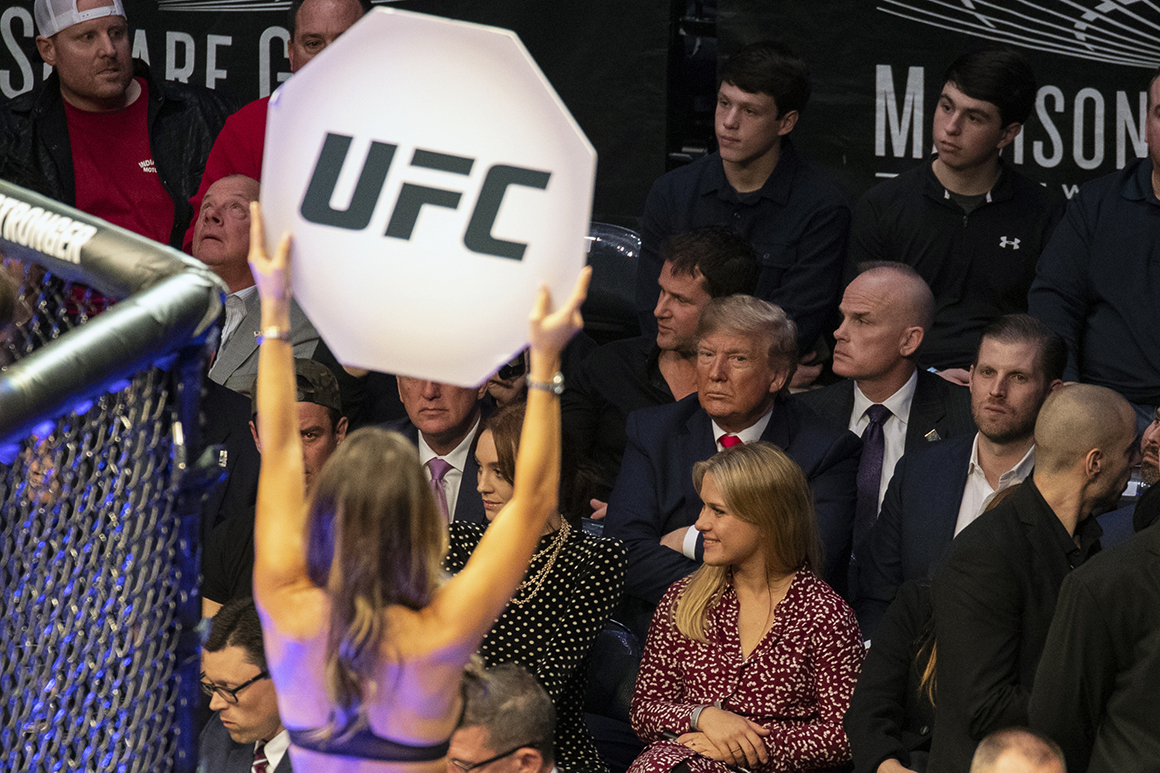 All politicians view themselves as fighters, but none has ever had as many in their corner as Donald Trump.

Now the president is trying to take full advantage of his popularity with influential mixed-martial artists by elevating them into full-blown campaign surrogates spreading his Make America Great Again gospel at swing-state rallies and fundraisers.

The fighters reinforce his us-against-the-world message, but just as important, they speak to a crucial demographic his campaign is trying to turn out in force: young men, who overwhelmingly form the fanbase for MMA and the Ultimate Fighting Championship company.

Trump’s association with UFC dates back to 2001, when he hosted two events in New Jersey at his former Trump Taj Mahal and was credited for helping the company in its formative years. Four years ago, UFC sold for $4 billion, a stunning amount for an enterprise that had a $2 million purchase price just two decades before.

MMA old-timers credit Trump for his long standing loyalty and his love of the sport, but the current and former fighters who support him today say his swagger and spirit are his most compelling attribute.

“Donald Trump is a fighter. We see a fighter in him,” said Colby “Chaos” Covington, the UFC’s top-ranked welterweight contender. “He’s exposed the fake news. He's got smear campaigns against him. The Hollywood elite is teamed up against him. And in him, we see a guy that is still resilient and still fighting back for the better of America.”

Covington packs an extra electoral punch for Trump: he lives in Miami, in swing-state Florida, as does his sometime-rival, Jorge Masvidal, who’s scheduled to introduce the president at a rally this weekend.

Trump and Covington have parlayed each other’s fame and notoriety ever since the fighter promised to win a title bout and bring the championship belt to the White House. Covington went out and did exactly that — he then visited the White House in August 2018 with UFC president Dana White, who first endorsed Trump in 2016. 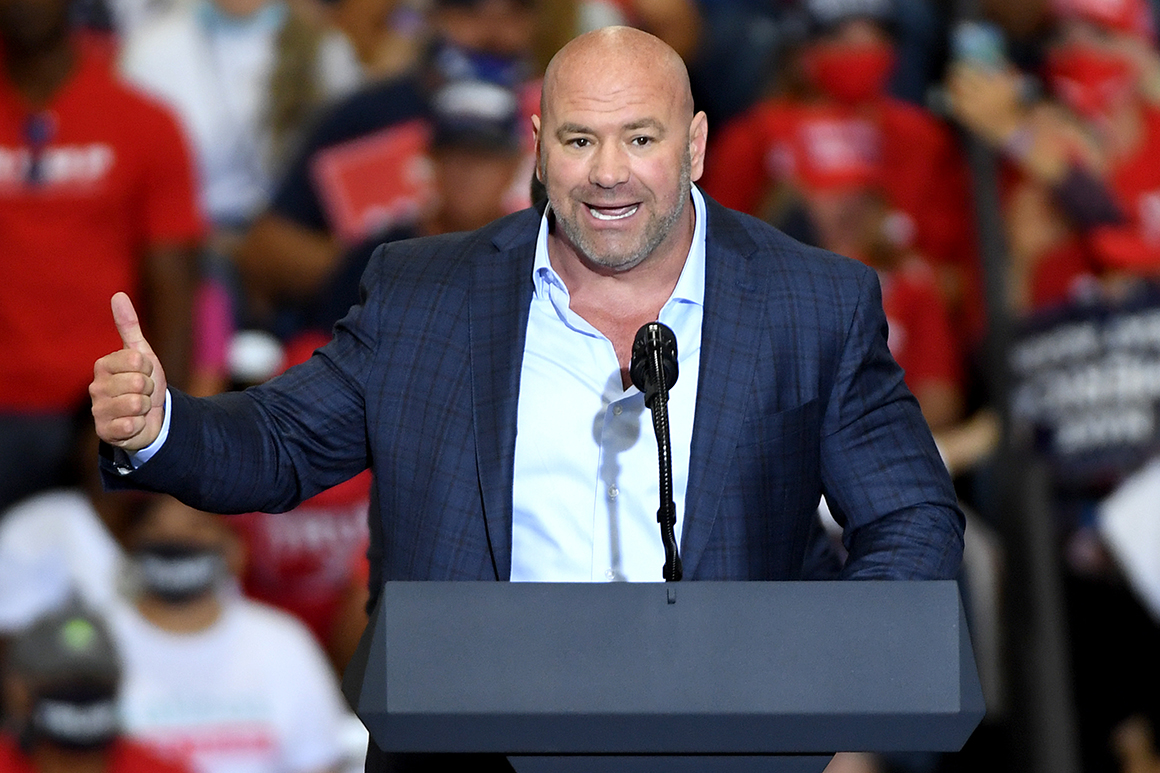 Last month, when Covington dispatched a longtime rival and celebrated with a speech in the octagon — the UFC’s fenced-in ring — he forecast that Trump would figuratively beat “Sleepy Joe” Biden in the same way. The fighter also attacked basketball star LeBron James, a Trump detractor, for his “woke” activism. Trump then called Covington on live television as he was being interviewed after the fight. The clip was viewed more than 1.2 million times, one of ESPN’s most-watched MMA videos on YouTube.

Days later, the president rewarded Covington with a ringside seat at the first presidential debate; after the president announced he had contracted Covid-19, critics trolled the fighter. Covington also spoke at a Trump fundraiser in Las Vegas that featured White and boxer Roy Jones, Jr., who is slated to come out of retirement with Mike Tyson for an upcoming fight.

Ever the fight fan, Trump tweeted about the upcoming matchup with Tyson, who endorsed Trump in 2016. Trump frequently comments on fights, earning mentions in fan-only publications and blogs like MMA Junkie, which reported last month how the president praised both Masvidal and reigning middleweight champion Kamaru Usman at separate Trump events in Miami and Atlanta, respectively.

Ultimate fighting hits a key demographic for Trump, who has made outreach to young men central to his campaign. According to UFC, it has 42 million fans in the United States, 70 percent of whom are male. Their median age is 35, the youngest “demographic profile” in pro-sports viewership. Young men are also the hardest to reach with TV commercials, according to the media tracking firm Advertising Analytics.

A UFC spokesman said the company is nonpartisan but doesn’t limit fighters from expressing political opinions — even if some of those Trump-endorsing pugilists and managers have also espoused conspiracy theories about coronavirus and QAnon.

Aside from the fighters’ large followings on social media (Masvidal has 2.5 million on Instagram; Covington 601,000), they’re all associated with tightly knit, martial-arts school gyms that are perfect for grassroots organizing, although rivalries between the fighters can sometimes be problematic in staging political events. 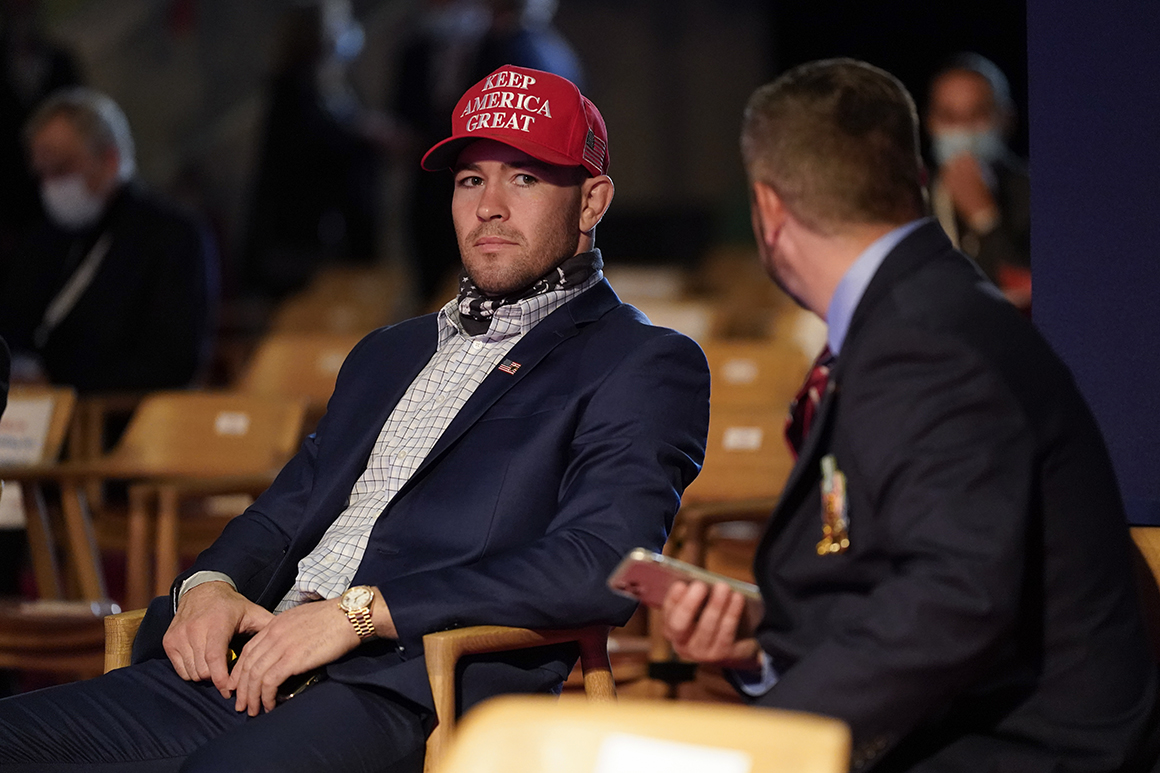 The Trump campaign counts at least a dozen current and former fighters as top endorsers and surrogates, six of whom were featured at a Don Trump Jr. rally in Las Vegas earlier this month.

Last month, former UFC champ Henry Cejudo – one of the most well-known Hispanic sports stars in Phoenix — spoke at a “Latinos for Trump” rally. A former Olympic gold medal wrestler, Cejudo’s appearance drew criticism because he’s the son of illegal immigrants from Mexico, whom the candidate has generally demonized.

“My dad wasn’t the best human,” Cejudo said, according to local reports. “He came to this country as a foreigner, broke the law, and was deported ... I’m going to tell you as an immigrant’s son, that you come to this country, and you break the law, and, rightfully so, you should pay the consequences.”

Biden’s campaign is making its own testosterone-heavy play with two popular former entertainment-wrestling champions: Dwayne “The Rock” Johnson and fellow actor Dave Bautista, who has one former MMA bout under his belt.

Covington says it was the Philadelphia Eagles’ refusal to meet Trump in the White House after their Super Bowl win that drove him to voice support for the president. Masvidal singled out NFL quarterback Colin Kaepernick’s statements about Cuba and his decision to wear shirts bearing the likeness of former dictator Fidel Castro and revolutionary Che Guevera.

As the son of a Cuban exile who nearly died at sea in a raft to make it to America, Masvidal, 35, was raised in a family with strong opinions against the Castro government. The decision by some Black Lives Matter protestors to wave Che flags in Miami — and the rise of Democratic socialists — helped drive more Cuban-American support to Trump after it drifted slowly away from Republicans in recent years.

READ:  ‘Like a Ghost’ in the White House: The Last Days of the Trump Presidency

Earlier this month, after Trump unexpectedly singled him out at a Miami rally, Masvidal embarked on a four-city bus tour in Florida with Donald Trump Jr. called “Fighters against Socialism.” In one of the cities, Coconut Creek, former UFC champ Andrei Arlovski joined them as did Hector Lombard and Cody Law, who have fought for a rival MMA company called Bellator. 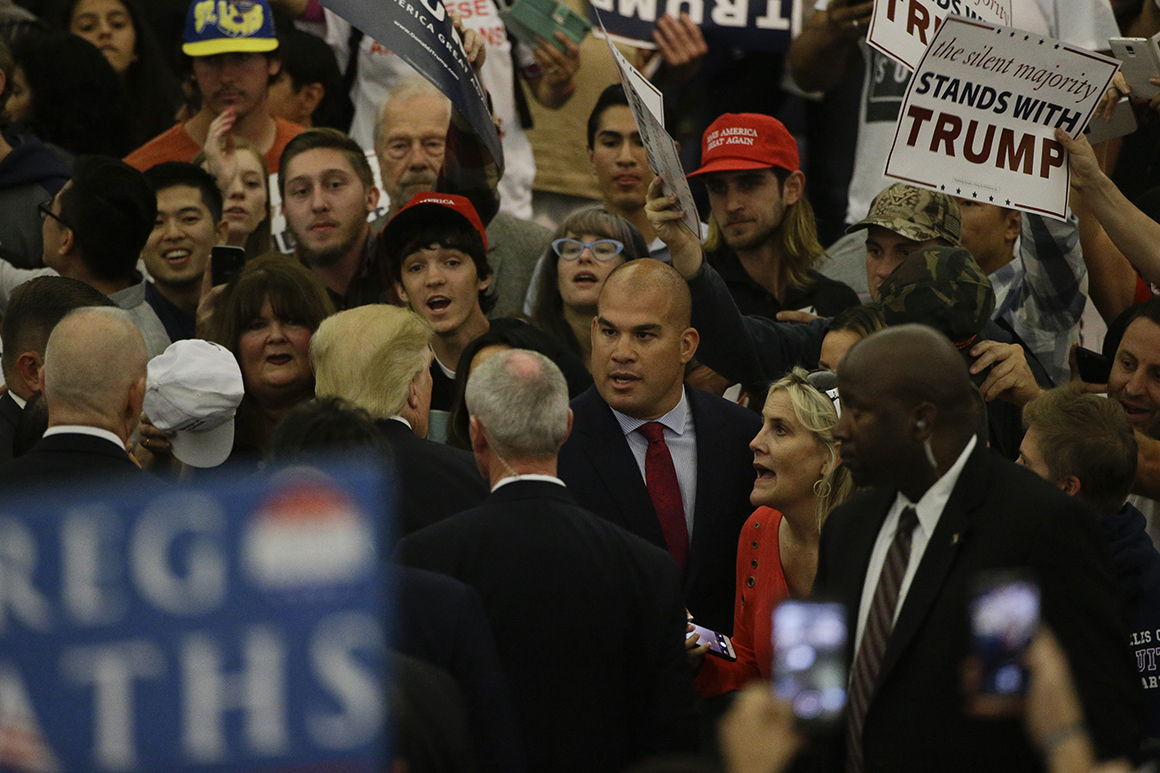 Masvidal said he likes to “wear a Trump mask when I have the most media ever in my face” and uses his Instagram feed to reach out to “the in-betweeners, especially the young ones, those are the ones that I can reach the most. They know who I am. They know I don't talk shit. It’s coming from my heart, coming from a good place.”

Reflecting the sentiment of many young and disaffected men who support Trump, Masvidal and Covington are particularly drawn to the president because of his outsider message and his branding of Washington as corrupt. That also appealed to former fighter and UFC legend Tito Ortiz.

Ortiz, who fought in front of Trump in 2001 at his New Jersey Trump Taj Mahal and later appeared on the “Celebrity Apprentice” with him, said Trump was the first person he ever voted for. Now, inspired by Trump, the 45-year-old is running for mayor in his hometown of Huntington Beach, Calif.

Former fighters also remember how Trump helped advocate for their sport and lent his star power to it nearly 20 years ago when it was viewed as too barbaric.

“He stood up for us when nobody else would,” said another UFC legend, Pat Miletich. “Fighting is also very capitalistic in nature, so the mindsets match.”