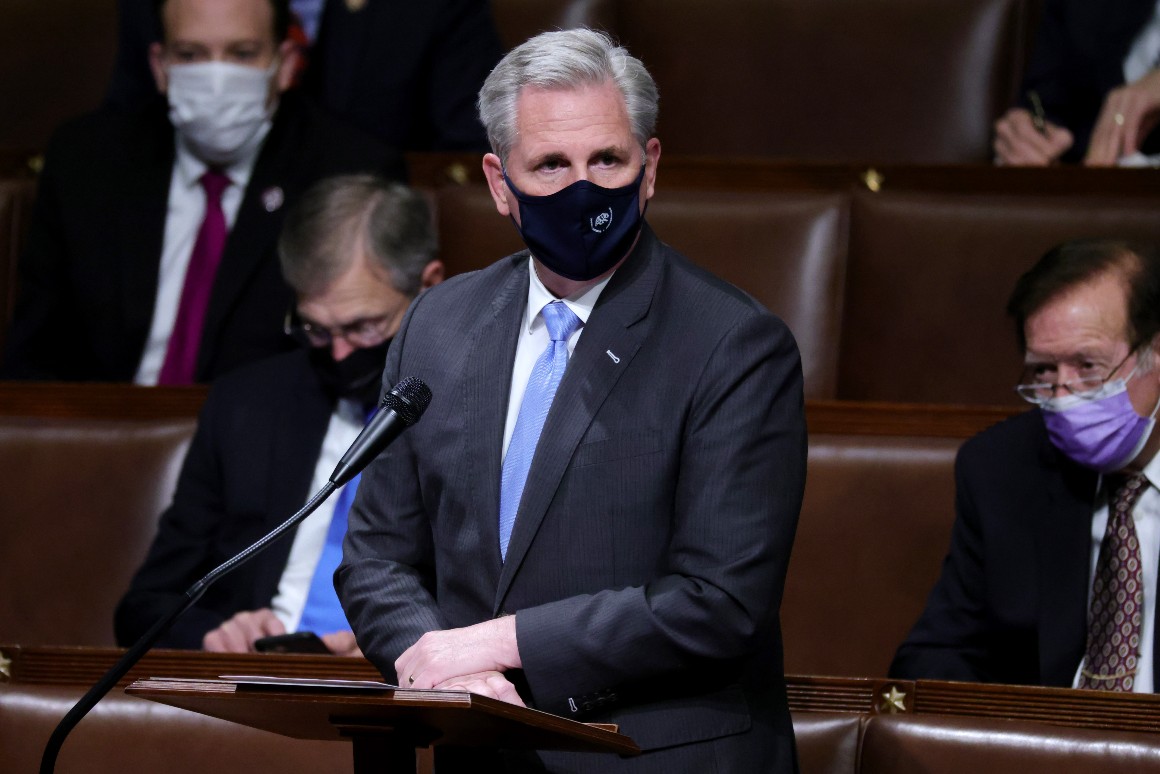 McCarthy’s remarks came during a House GOP-wide conference call — their first meeting since a mob of pro-Trump rioters assaulted the Capitol building and left five people dead in an attempt to halt the certification of President-elect Joe Biden’s victory. McCarthy also told members that he urged Trump to call up Biden and congratulate him for his win, sources said.

The California Republican’s description of his conversation with Trump runs counter to the public stance held by the president, who hasn’t accepted any blame for encouraging his supporters to go to the Capitol and pressure lawmakers into overturning his 2020 loss.

The GOP meeting, which lasted over two hours, offered Republicans an opportunity to air their safety concerns, ask questions about the attack, and discuss ways other than impeachment to hold Trump accountable for his role in inciting the violent mob. Democrats are aiming to bring impeachment articles to the floor this week and are expecting to get some bipartisan support.

McCarthy — who is one of Trump’s closest allies and is opposed to impeachment — acknowledged that they have some serious work to do in uniting the GOP conference, which is now bitterly divided.

“Now is a far greater and more urgent task,” McCarthy told members on the call, according to one source familiar with the remarks.

To the outrage of many Republicans, it took Trump nearly 24 hours to release a video condemning the violence and lawlessness that overtook Capitol Hill. Trump acknowledged emotions were running “high” and said he was turning his focus to “ensuring a smooth, orderly and seamless transition of power.” But the president avoided taking any personal blame for urging his followers to go to the Capitol on Wednesday to protest the election being taken from them.

“To those who engaged in the acts of violence and destruction, you do not represent our country,” Trump said. “And to those who broke the law, you will pay.”

Before the conference call, McCarthy — who has been hearing out members in one-on-one conversations in the days since the riots — sent a letter to his Republican colleagues saying he is opposed to impeachment, though he didn’t mention Trump by name.

Instead, McCarthy outlined a number of other options that some members have expressed interest in pursuing, including censuring Trump and forming a commission to investigate the Capitol attack. Some of those options were discussed on the conference call.

But even with those choices up for debate, there are still as many as 10 House Republicans who are seriously considering backing impeachment, including GOP Conference Chair Liz Cheney of Wyoming and frequent Trump critic Rep. Adam Kinzinger of Illinois.

During the call, Cheney did not tip her hand on her impeachment stance, but framed it as a "vote of conscience" and "not a political vote," according to a source.

The meeting came after multiple House Republicans privately expressed anger and frustration with McCarthy and House Minority Whip Steve Scalise (R-La.) for failing to show leadership during the crisis and not publicly pushing back on Trump. Members were also incensed that the pair carried on with the election challenges after the riots temporarily derailed floor action and forced members, staffers and reporters to hunker down in safe rooms.

Some freshman lawmakers were more vocal about how much work the GOP needs to do to win back the American people’s confidence.

“It didn’t have to end like this, with five people dead, including a Capitol Police officer,” Rep. Peter Meijer (R-Mich.) wrote in Sunday Op-Ed published in the Detroit News.

“If the Republican party ever hopes to regain the public’s trust and lead the country forward after this heinous assault, it must first be honest with itself,” Meijer concluded.