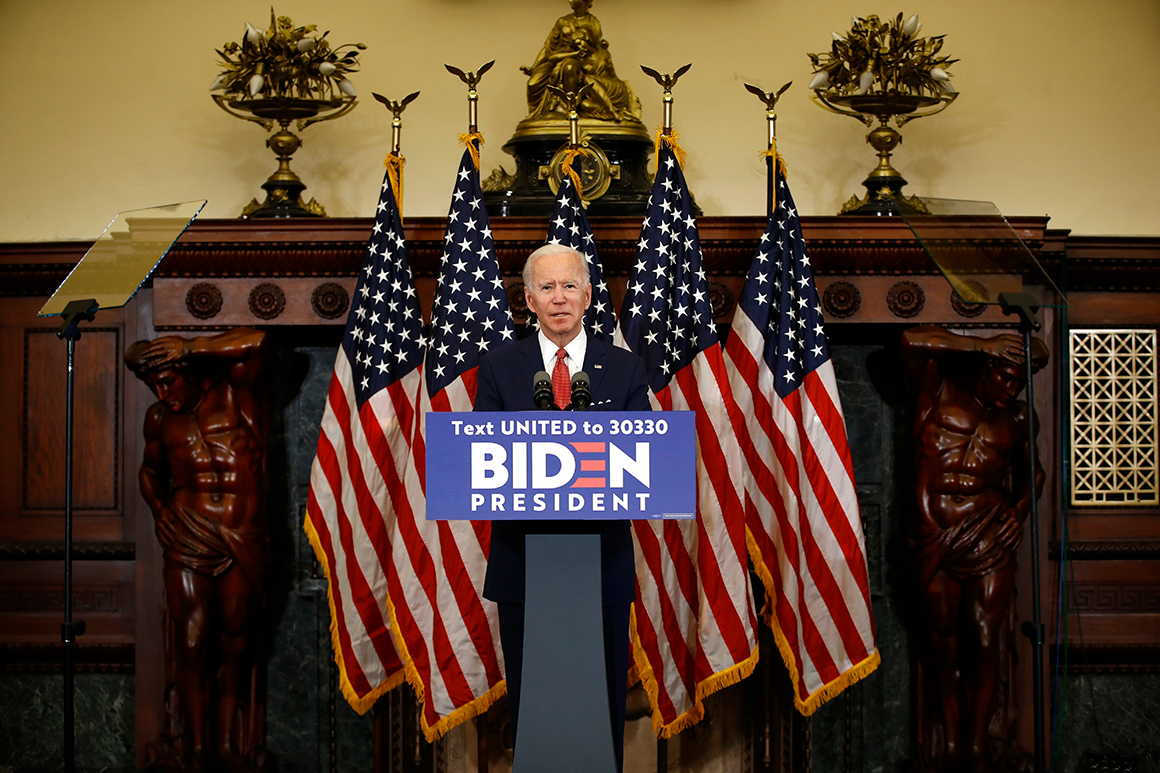 Former Vice President Joe Biden stepped out of the shadows of his self-imposed quarantine Tuesday to address the unrest gripping the nation and paint President Donald Trump as an authoritarian.

“When peaceful protesters are dispersed by the order of the president from the doorstep of the people’s house, the White House — using tear gas and flash grenades — in order to stage a photo op at a noble church, we can be forgiven for believing that the president is more interested in power than in principle,” Biden said.

The presumptive Democratic presidential nominee's comments made reference to protests and riots in Washington, where law enforcement used tear gas, flash-bang grenades and rubber bullets on Monday to clear a peaceful crowd from Lafayette Square, which is across Pennsylvania Avenue from the White House. With the park cleared, Trump walked across it to visit St. John's Church, where a small fire was lit over the weekend amid rioting.

The protests and riots in Washington and elsewhere around the country were spurred by the death of George Floyd, a 46-year-old black man who was pinned to the ground by a Minneapolis police officer who put his knee on Floyd's neck. That officer has been charged with third-degree murder and second-degree manslaughter, but protests against widespread racial injustice in the U.S. have persisted.

Biden emphasized Floyd's last words — “I can’t breathe” — which became a rallying cry in 2014 after another black man, Eric Garner, died after a caught-on-camera struggle with New York City police.

“George Floyd’s last words. But they didn’t die with him. They’re still being heard. They’re echoing across this nation,” Biden said. “They speak to a nation where too often just the color of your skin puts your life at risk. They speak to a nation where more than 100,000 people have lost their lives to a virus and 40 million Americans have filed for unemployment – with a disproportionate number of these deaths and job losses concentrated in the black and minority communities.”

Biden’s speech marked the latest evolution of a campaign that until recently was literally stuck in the basement of his home in Wilmington, Delaware, where he has ridden out the coronavirus pandemic since mid-March. Though he has been criticized from both the left and right for the strategy, Biden has seen his poll numbers rise against Trump, whose handling of the pandemic was widely panned.

As the nation began slowly opening back up amid the pandemic, Floyd’s death led both to the nationwide unrest and gave Biden impetus to start leaving quarantine for the campaign trail to contrast his leadership style with Trump’s. Biden met with protesters in Delaware over the weekend and with black faith leaders at a Wilmington church on Monday.

Biden condemned both the violence and police brutality, although the speech focused heavily on racial injustice and the elimination of the “guardrails that have long protected democracy.” He accused the president of reading neither the Bible nor the U.S. Constitution.

“I promise you this. I won’t traffic in fear and division. I won’t fan the flames of hate. I will seek to heal the racial wounds that have long plagued this country – not use them for political gain,” Biden pledged. “I’ll do my job and take responsibility. I won’t blame others. I’ll never forget that the job isn’t about me. It’s about you. And I’ll work to not only rebuild this nation. But to build it better than it was.”