The California Republican accuses The Washington Post of intentionally lying about his actions as President Donald Trump was mired in controversy about Russia. 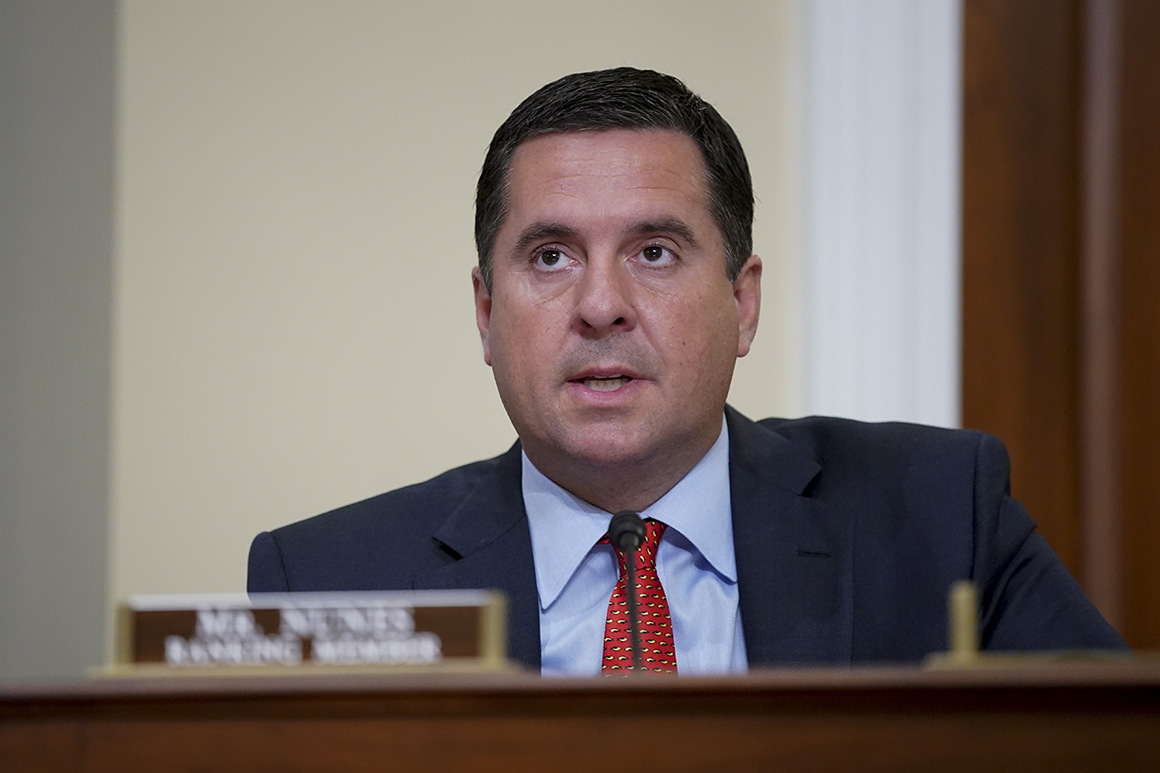 Lawyers for Rep. Devin Nunes and The Washington Post squared off in federal court on Tuesday over a suit Nunes filed last year accusing the newspaper of intentionally lying about his actions as President Donald Trump was mired in controversy about his campaign’s alleged ties to Russia.

The article, published six days after the 2020 election, alleged that Nunes (R-Calif.) made a “midnight run” to the White House in 2017 to access classified documents that could bolster Trump’s claim that his 2016 campaign was spied on by the Obama administration, and that Nunes believed Trump Tower was tapped during that campaign.

Nunes alleges that both those contentions were false. Indeed, after the suit was filed, the newspaper corrected the article to note that the now-ranking Republican on the House Intelligence Committee maintains that his trip took place “during daylight hours” and that he has said he does not believe Trump Tower was wiretapped.

Despite those concessions from the paper, Nunes has pressed on with his suit, prompting the hearing on Tuesday before U.S. District Court Judge Carl Nichols, a Trump appointee.

During the session, Nunes’ attorney, Steven Biss, insisted that the corrected report was even more damaging to Nunes’ reputation than the original one.

“What they did was even worse,” Biss said. “The corrected statement was more defamatory.”

Biss noted that the corrected article said Nunes “was given access at the White House to intelligence files that Nunes believed would buttress Trump’s baseless claims of the Obama administration spying on Trump Tower.”

Biss said that made it sound as though Nunes was trying to cook up a fake story to back Trump. “They’re basically accusing [Nunes] of being some type of broadsheet for the president,” Biss said.

Post attorney Nicholas Gamse declared that the paper’s description of Nunes’ White House trip as a “midnight run” was an innocuous error.

“That is a difference in timing,” Gamse said. “That was a minor inaccuracy.”

“A jury could infer that or a reasonable reader could infer an implication of this that something improper was going on and therefore it had to be done at an odd time,” the judge said.

But Gamse said a negative implication of that sort wasn’t strong enough to amount to what’s needed to advance a libel claim: an assertion that someone is “disgraceful or unfit for his job.”

Ultimately, calling Nunes’ White House trip a “midnight run” was no more insulting than calling it a “high-noon handoff,” the Post attorney said.

“Maybe that nickname was a little cheeky. Colorful language and hyperbole is not actionable,” Gamse said.

Biss said the Post had a “vengeful motive” in publishing the article: that Nunes had demolished the claim that the 2016 Trump campaign was working hand-in-hand with Russia. The Post “had invested heavily in that narrative, and Congressman Nunes blew it out of the water,” said the attorney, who has filed a series of suits for Nunes against various media outlets.

Biss also sought to leverage another high-profile case involving the New York Times editorial page to argue that the author of the Post article in question, Ellen Nakashima, should’ve known that Nunes never agreed with Trump’s claim that Trump Tower was tapped. Nunes’ lawyer noted that Nakashima contributed to stories in 2017 that said Nunes saw no evidence of that.

READ:  Prosecutor says he was pressured to cut Roger Stone 'a break' because of his ties to Trump

In the Times case Biss cited, Sarah Palin, the former Republican vice presidential nominee and Alaska governor, contended that Times editorial page editor James Bennet knew or should have known a contention he made that Palin was linked to a deadly shooting was false, because he used to edit The Atlantic magazine, which debunked the allegation. An appeals court reinstated her suit, based in part on that argument.

Gamse dismissed the comparison, noting that the Palin case was highly unusual, in part because Bennet is the brother of Sen. Michael Bennet (D-Colo.) “There’s all sorts of personal allegations that were not here,” Gamse said.

Nichols issued no immediate ruling on the Post’s motion to dismiss the case but said he would seek to do so soon.