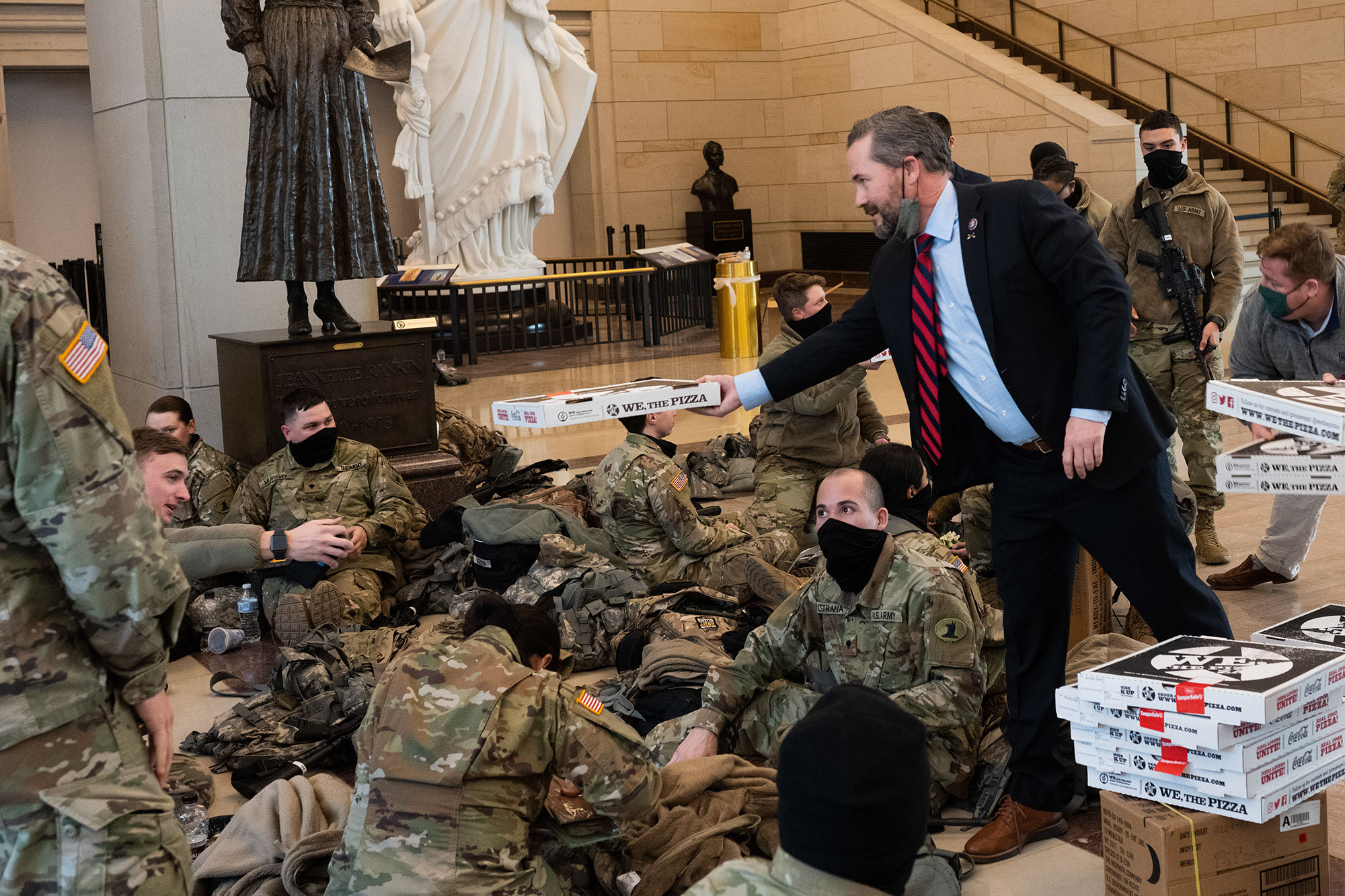 Frustrated lawmakers on Wednesday demanded a better accounting of the scope of a Covid outbreak among the National Guard members deployed to the Capitol, and answers on why thousands of troops are being forced to remain on duty in Washington, D.C., through March for an unspecified threat.

“That is a really dense force packed into just a few blocks — that’s more than we have in Iraq and Afghanistan combined,” said Rep. Michael Waltz (R-Fla.). “If there is not a very clear threat and a very clear mission then send them home.”

Waltz told POLITICO in an interview that he is not satisfied with the information the Pentagon has provided on the Covid outbreak. Defense officials told reporters on Monday that nearly 200 out of the 25,000 troops had tested positive for the virus. But the final count will likely be much higher, as recent batches of mass testing have come back 10-15 percent positive, POLITICO reported Tuesday.

Congressional leaders say they have been unable to get adequate information on Covid-19 numbers from the Guard, according to two aides. On Wednesday morning, the National Guard responded in writing to a top senator but did not disclose additional information.

“Less than 1 percent of the force in attendance has tested positive,” the response stated, according to a congressional aide. The Guard also insisted that troops are following federal Covid-19 safety protocols, including mandatory quarantines for troops exposed to the virus.

READ:  Climate pledges depend on what happens to Trump

“National Guard came from across the country to protect the peaceful transfer of power and successfully completed that mission. As threats of violence continue, Guard presence is expected for the near future. We owe it to our brave men and women in uniform to protect their health and limit the spread of the coronavirus," Brown said. "This must be a priority for us moving forward.”

A Guard spokesperson did not respond to a request for comment.

As for threats on the Capitol, Waltz on Wednesday led a group of 11 House Republicans in penning a letter to acting Army Secretary John Whitley requesting a briefing on all intelligence related to Capitol security and justification for keeping 5,000 troops deployed to D.C. through March.

"The National Guard should be used as an option of absolute last resort,” wrote the lawmakers, including Reps. Elise Stefanik of New York and Chris Stewart of Utah. The Defense Department has said in the past that it is not responsible for domestic intelligence collection.

Hours later, the Department of Homeland Security issued a national terrorism advisory warning of a "heightened threat environment" across the country related to frustrations surrounding the presidential election. Officials do not have information to indicate any "specific, credible plot," but expressed concern that riots would continue in the coming weeks.

A spokesperson for Waltz said the news did not change lawmakers' request for more information on what is driving the need for such a large force specifically at the Capitol.

Meanwhile, Sen. Tom Cotton (R-Ark.), who last year advocated for a military presence in U.S. cities to deter violence related to civil rights protests, said he no longer sees a need for troops to be guarding the Capitol.

“I sit on the Intelligence Committee, but I’m aware of no specific, credible threat reporting—as distinguished from aspirational, uncoordinated bluster on the internet—that justifies this continued troop presence,” Cotton wrote in a Fox News op-ed. “Thus, I believe the rest of these soldiers should also go home to their families and civilian jobs.”

POLITICO reported that former President Donald Trump's upcoming impeachment trial, which is slated to begin the week of Feb. 8, could draw additional unrest that requires troops to remain in Washington. In the aftermath of the Jan. 6 insurrection at the Capitol, 10-foot barriers with razor wire were erected around the Capitol complex. Around 25,000 troops were in the nation’s capital by Inauguration Day.

But neither lawmakers nor the troops themselves have been given a clear answer on the nature of the specific threat to the Capitol, or why it requires keeping such a large force in Washington, Waltz said. He noted the U.S. military has just 5,000 troops in Iraq and Afghanistan combined.

“If there is a threat that big and that serious [the media] should know, the public should know and certainly the soldiers should know that we’ve got to have a brigade defending us,” Waltz said.

Waltz questioned whether the threat was dire enough to risk a significant Covid-19 outbreak among thousands of troops in close quarters.

“Why do 7,000 need to be crammed into such a small area? That’s a really dense force,” he said. “You layer Covid concerns on top, and you have to weigh that with ‘is the threat that serious?’”

READ:  FBI, CISA urge public not to panic if they hear about election hacking

Guard members standing watch at the Capitol relayed their concerns to Waltz in recent conversations, he said, noting that the troops are “citizen soldiers” who left full-time jobs, businesses and families behind for what they believed to be a short-term deployment. Many are single parents who were “yanked out with no notice” and struggling to find long-term child care, he said.

Many Guard members are worn out from a long year of heavier than usual deployments, including to support the Covid-19 response, civil unrest, hurricanes in Florida, wildfires in California, on top of normal overseas orders, Waltz said.

“I just don’t think that all that’s being fully considered, on top of the fact that many of them have already been heavily deployed last year out of their lives and careers,” he said.