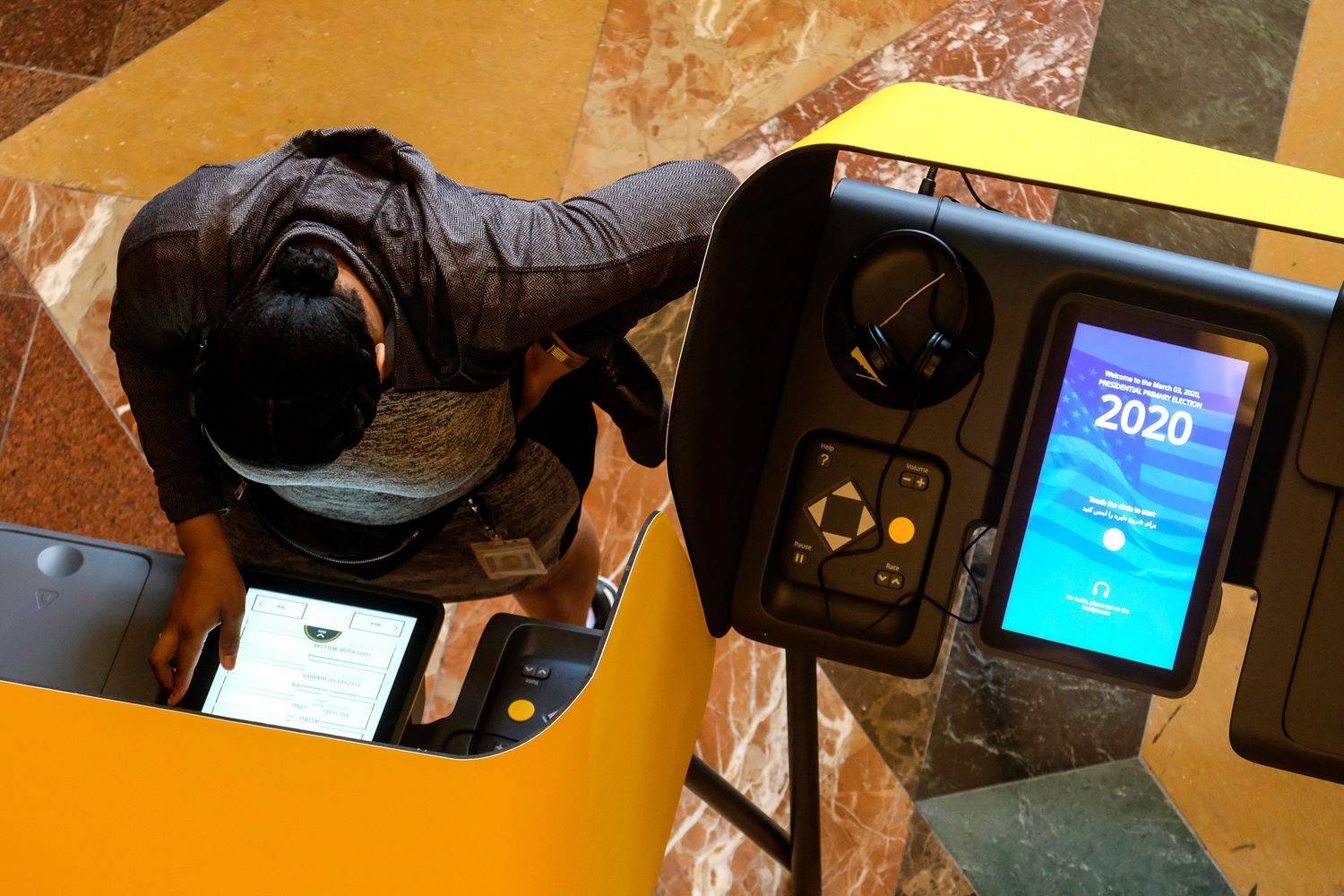 The hourslong wait times that snarled the March 3 primary in Los Angeles County stemmed from malfunctions in the electronic tablets used to check in voters at the polls, according to an unpublicized county report that adds to questions about the nation’s readiness for November.

The report concludes that these devices — known as electronic poll books — and not the county’s new $300 million voting machines were the source of those delays. Although the voting machines also had problems, the report faults inadequate planning, testing and programming of the poll books that workers used to check in voters and verify that they’re registered — technology that has also been implicated in this month’s meltdown at the polls in Georgia’s primary.

Electronic poll books store a copy of the county’s voter registration list and automatically update that list as each voter checks in. Because Los Angeles County did not have backup paper copies of the voter list, poll workers were not able to check in voters when the devices failed, leading to long lines.

The findings about the March primary, which Los Angeles County quietly posted to its website recently, have not previously been reported.

About 15 percent of Los Angeles County voters who responded to a county survey reported waiting more than two hours to vote, and 10 percent said they waited longer than three hours, according to people who responded to a county survey. The Presidential Commission on Election Administration has said voters should not have to wait more than 30 minutes.

The delays were caused by some poll books taking hours to sync their voter lists with each other and with the countywide voter registration database, making them unusable during this time, the county’s report says. The devices also had another problem: Poll workers were supposed to be able to look up voters’ records by name and address but were limited to name searches, producing hundreds of false positives in some cases that poll workers had to sift through. The report blames a vendor programming error for this issue.

The problem with the county’s new $300 million voting machines was a different issue. It involved paper jams caused by a faulty printer gear. Where poll workers were unable to resolve the jams, 1,297 of the machines were taken out of service. But this did not contribute to voting delays, says the report, because the county’s vote centers had enough of those machines to replace them.

“While there was a perception among voters and the media that [the voting machines] were not operable and contributed to wait times … data show that for the vast majority of locations, this was not the case and had minimal documented effect on wait time,” the report says. “Based on an analysis of voter check-ins and the start of voter sessions, there was no evidence of lines forming between the check-in table and [the voting machines], after voters checked in and were ready to vote.”

READ:  Top takeaways from Tuesday’s primaries: The left, the right, the wait

The number of voting machines decommissioned during the primary amounted to just 5.6 percent of the 23,104 machines deployed, much smaller than the 20 percent that county spokesperson Michael Sanchez had estimated to reporters on Election Day. But a computer and voting machine expert says that even a 5 percent failure rate on Election Day is “insane.”

“It’s insanely unacceptable as far as any kind of mission-critical device is concerned,” said David Jefferson, a former computer scientist at Lawrence Livermore National Laboratory and longtime voting machine expert. He called it particularly egregious because the county should have caught the problem during pre-election testing. “I don't know how they could miss such a failure rate.”

The county says in its report that it caught the faulty gear issue during pre-election testing but thought it was limited to a small subset of machines.

Election equipment issues weren’t the only problem in the primary, however. The county also failed to send out 17,000 vote-by-mail ballots within the statutory time frame because a script designed to identify voters eligible to cast votes in a 25th Congressional District special election improperly excluded 17,000 voters from that list. The report says the script was inadequately tested.


Complaints about undelivered mail-in ballots were also a problem in this year’s Pennsylvania and Georgia primaries, where voters who sought alternatives to in-person voting to avoid possible exposure to the coronavirus were forced to stand in line at polling places anyway.

None of this bodes well for the presidential elections that are just five months away, especially in a year when many other states are also adjusting to new voting technology or trying to implement a vast expansion of mail-in voting.

Los Angeles County’s board of supervisors called for an investigation into the March primary problems, but the investigation was conducted by the office of County Registrar Dean Logan instead of an independent third party. Logan’s office hired a consulting firm to conduct a third-party review and validation of its report, per the board’s request, but that assessment hasn’t been completed, Sanchez told POLITICO. He was unable to say when it would be done.

The county’s 135-page report, quietly completed in late April and posted to its website without an announcement to news media, describes systematic failures that largely could have been prevented with better planning and testing.

Neither the county nor the secretary of state’s office responded to repeated requests for comment. County supervisors also did not respond to POLITICO’s inquiries.

Los Angeles County is one of the nation’s most populous voting districts, with more than 4 million registered voters. Logan and his staff were under close scrutiny before and during the primary because of their decision to deploy a complicated new voting system during an important election year. The custom-made system, built by the U.K.-based company Smartmatic according to a county-specified design, was in development for a decade and was supposed to set a new standard for security, reliability and transparency. But testing and review by the secretary of state’s office last year found a number of mechanical and security issues with the system. These included a high rate of paper jams.

The system is a so-called ballot-marking device: Voters insert a blank paper ballot into the machine and make their selections on a touchscreen. The device then prints out a machine-generated paper ballot marked with their choices. The voter can review the ballot before reinserting it into the machine, where it’s dropped into an attached ballot box.

Officials believed the problem was limited to 10 percent of machines that were manufactured during a two-week period and replaced the printer assembly on those machines.

But during the election, the report says, it became clear that more machines had a faulty gear.

Officials have since inspected all 31,000 machines the county owns and found 14,346 that need to have their printer assembly replaced. Only 3,523 of those repairs were completed at the time the report was finished in late April, suggesting it could take months to repair all of the machines.

Douglas Jones, a computer science professor at the University of Iowa who has examined multiple voting systems for state and local election officials over the years, said the printer gear problem is “evidence of really lousy quality control” on the part of either the manufacturer or the county. But he said that given this is the first time the county created its own voting system with a manufacturer and the county is not traditionally in the business of supply chain management, “If this is their only significant manufacturing glitch, they're doing pretty well.”

Faulty equipment and poor planning and testing were also at the core of the KnowInk Poll Pad issues, based on the report’s findings. The problem was due primarily to changes the county made to this year’s elections and to county workers and KnowInk improperly testing the poll books beforehand.

Los Angeles County replaced its traditional neighborhood precincts this year with 978 consolidated vote centers, which allowed voters to cast a ballot at any center convenient to them. Some vote centers were open for 10 days prior to Election Day, but nearly three quarters of in-person voters waited until that day to vote.

The county deployed a little more than 7,000 KnowInk Poll Pads during the 11 days of voting. During early voting, only some of them were used. The poll books were configured to sync their data every 10 minutes with other poll books and with the countywide voter registration database to prevent voters from casting more than one ballot. 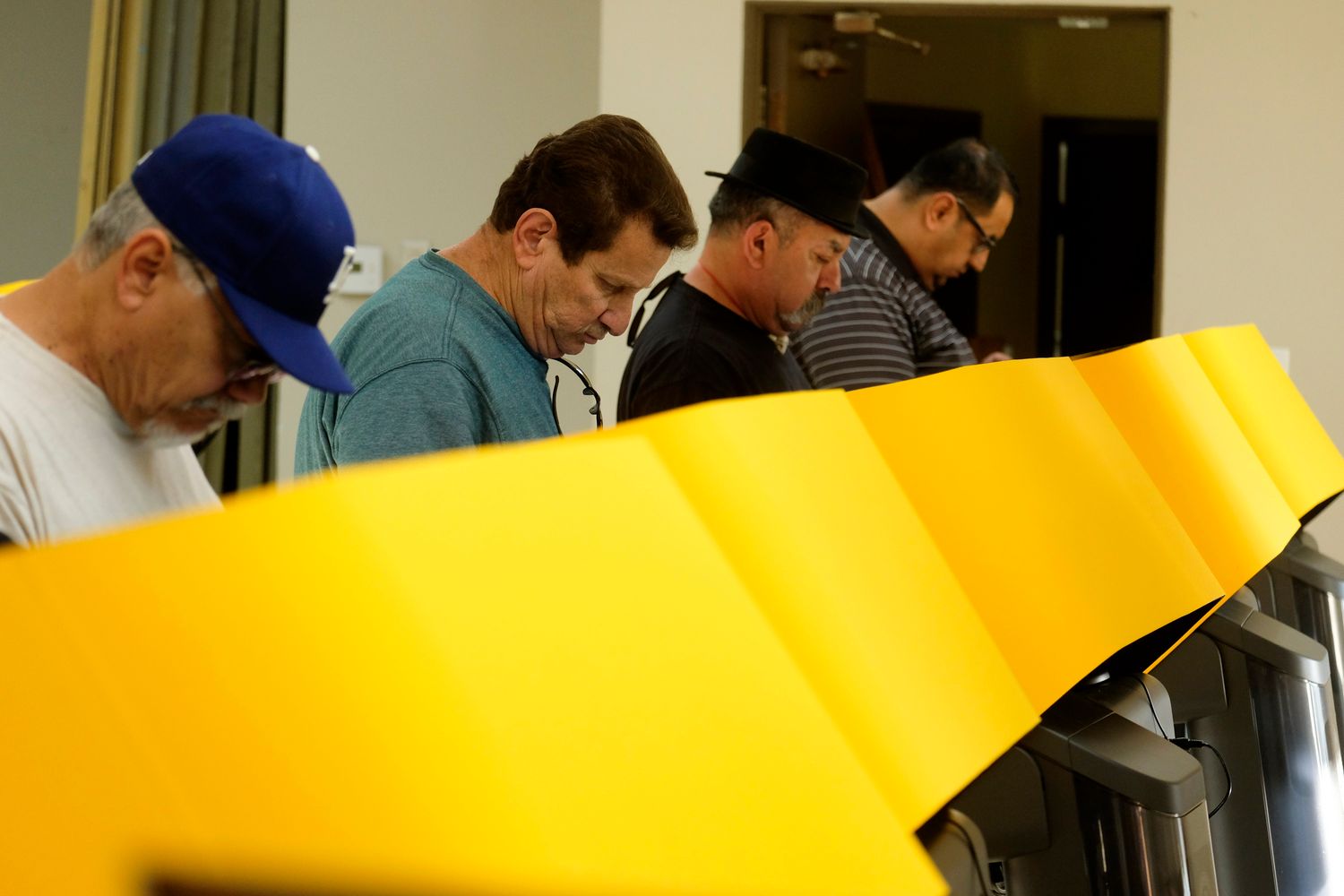 Because those poll books were updating new information throughout the 10 days of early voting, they were up to date the morning of the primary, but poll books not used during early voting had a lot of data to sync when vote centers opened on Election Day. Network bandwidth was sufficient, the report says, but some poll books took more than two hours to synchronize and others were still trying to sync at the end of the day. The poll book software would also freeze or crash and navigation was slow, says the report.

The problems were particularly acute in vote centers that had fewer than five poll books, creating long lines because the county did not have a paper backup of the voter list at vote centers. On its website, KnowInk describes the Poll Pad as a device that replaces “the outdated and inefficient paper model that is often the cause of long lines at the polls and inefficient election record keeping."

Compounding the problem was a configuration issue, according to the report: If the synchronization exceeded 15 minutes, the device automatically displayed an alert telling poll workers to have the voter cast a provisional paper ballot. Provisional ballots are conditional ballots that don’t get counted until officials can verify the voter is registered, but the window of time for doing this after an election is brief and many provisional ballots never get counted for this reason. Many Los Angeles County voters were upset at being asked to cast provisional ballots when they felt the county’s poll book should have been working.

The report also says KnowInk failed to provide poll workers the ability to search for voters by address, a capability that the county had requested after poll workers experienced problems locating voter records in November. Although KnowInk did initially add this function, the report says, it was making the search process slow and cumbersome, and days before the March primary, the company disabled it. It’s unclear if county officials knew it had been disabled before the primary.

“Voter search did not operate as expected based on product demonstrations and in field testing,” says the report, suggesting the county was surprised by this. “This resulted in additional time required for Election Workers to review many voter records containing similar names in order to locate the correct record.”

The county says it plans to work with KnowInk to fix the syncing and searching issues and also plans to have a minimum of five poll books at each vote center in this November’s election.

The county also plans to add a feature to the county’s existing mobile app that allows voters to look up their registration status. The new feature will let them check in on their phone while waiting in line and receive a code. The voter will then scan their check-in code into the poll book to pull up their voter record directly, instead of requiring a poll worker to type the information into the device, thus speeding up the process.