Several world leaders denounced his arrest as a hijacking, and it prompted another round of Western sanctions on Belarus. 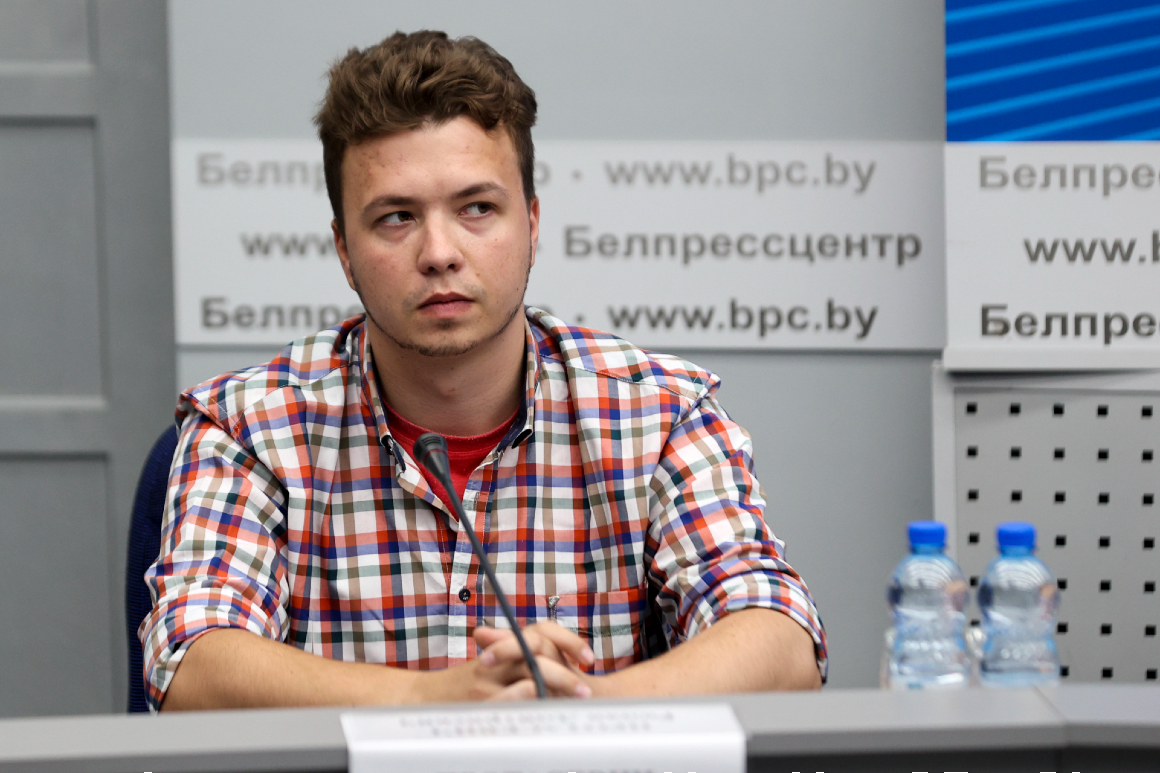 KYIV, Ukraine — The dissident Belarusian journalist and his Russian girlfriend who were arrested after being pulled off a flight that was diverted to Minsk have been transferred from jail to house arrest — a move the country’s exiled opposition leader said Friday was positive but still left them “hostages.”

Raman Pratasevich, whose messaging app channel was widely used in last year’s massive protests against authoritarian President Alexander Lukashenko, and girlfriend Sofia Sapega were seized on May 23 when their Ryanair flight from Greece to Lithuania was forced to land in Minsk because of a reported bomb threat.

Several world leaders denounced the dramatic gambit as a hijacking, and it prompted another round of Western sanctions on Belarus, where Lukashenko responded to the months of mass protests with a brutal crackdown.

Pratasevich, who faces a potential 15 years in prison, has been seen since his arrest in videos on state television and at a government press briefing expressing regret for his activities. The opposition said he spoke under duress.

Belarus’ Investigative Committee said in a statement that Pratasevich and Sapega have been moved to house arrest after they had cooperated with investigators and accepted a pre-trial deal. It said they “agreed to help investigators probe the crimes, expose their accomplices and do everything possible to compensate for the damage that was inflicted” and made “consistent confessional testimony.”

“House arrest is not freedom, they're still facing charges, their every step is still being watched. It means they're still hostages,” said Tsikhanouskaya, who left Belarus for Lithuania last year under pressure from the authorities.

She added that her team is in touch with Pratasevich's parents, who “aren't given any information about their son, aren't allowed to talk to him" and are “convinced that the regime is playing a game, using Raman's and Sofia's lives.”

She urged the West not to ease its pressure on Lukashenko and keep pushing for the release of all political prisoners and early elections, noting that Western sanctions have been quite powerful.

“We are really glad that conditions have changed ... but still they are prisoners,” Tsikhanouskaya told The Associated Press. “This so-called release after imposing sanctions is a political game.”

Pratasevich's mother Natalia Pratasevich told Poland’s TVN by phone that she has gotten no official word regarding her son or if conditions of his detention have changed. She said a move to house arrest is "likely an improvement in their living conditions. But I’ll repeat, none of the charges against them have been dropped. They remain hostages and captives just like before.”

Tsikhanouskaya's adviser Franak Viacorka, who spoke to the parents, added that they don't believe authorities plan to free their son. Instead, Viacorka said, the move might be aimed at holding off additional sanctions.

“We urge the European and the global community not to give in — everyone needs to be free and not under house arrest,” he said, adding that Lukashenko’s goal is ”to create an illusion of softening and concessions. But this is just one prison replaced with another.”

Viacorka said Pratasevich's sister has been able to pass on some belongings to him and talk to him. “The house arrest is not freedom, he lives there with operatives of the KGB, agents who watch him round the clock,” he said.

Sapega's lawyer, Anton Gashinsky, also confirmed that his client was transferred to house arrest recently, without specifying when. She is now staying in an apartment in Minsk, and her parents met her on Thursday at a restaurant.

Marie Struthers, Amnesty International’s Eastern Europe and Central Asia Director, said putting the pair under house arrest “looks like a cynical ploy by the Belarusian authorities to secure the lifting of international sanctions.”

The months of mass protests were fueled by Lukashenko’s reelection to a sixth term in an August 2020 vote that was widely seen as rigged. The subsequent crackdown saw more than 35,000 people arrested and thousands beaten by police. Most opposition leaders have been jailed or forced to leave the country.

In the wake of these violations and the flight diversion, the United States, the European Union, Britain and Canada joined forces on Monday to impose sanctions on several top Belarusian officials. The EU also imposed a series of bruising economic sanctions that target key Belarus exports, including potash — a common fertilizer ingredient — and petroleum products.

Belarus’ Foreign Ministry says the sanctions will hurt ordinary people and “border on the declaration of an economic war.” On Friday, the ministry again condemned the sanctions and promised “retaliatory measures” in the coming weeks. “It's about time European politicians realized that pressure and sanctions are not a language one should use with Belarus," the statement read.