A veteran diplomat lays out why previous administrations chose not to make the declaration — and why Biden’s choice is now the right one. 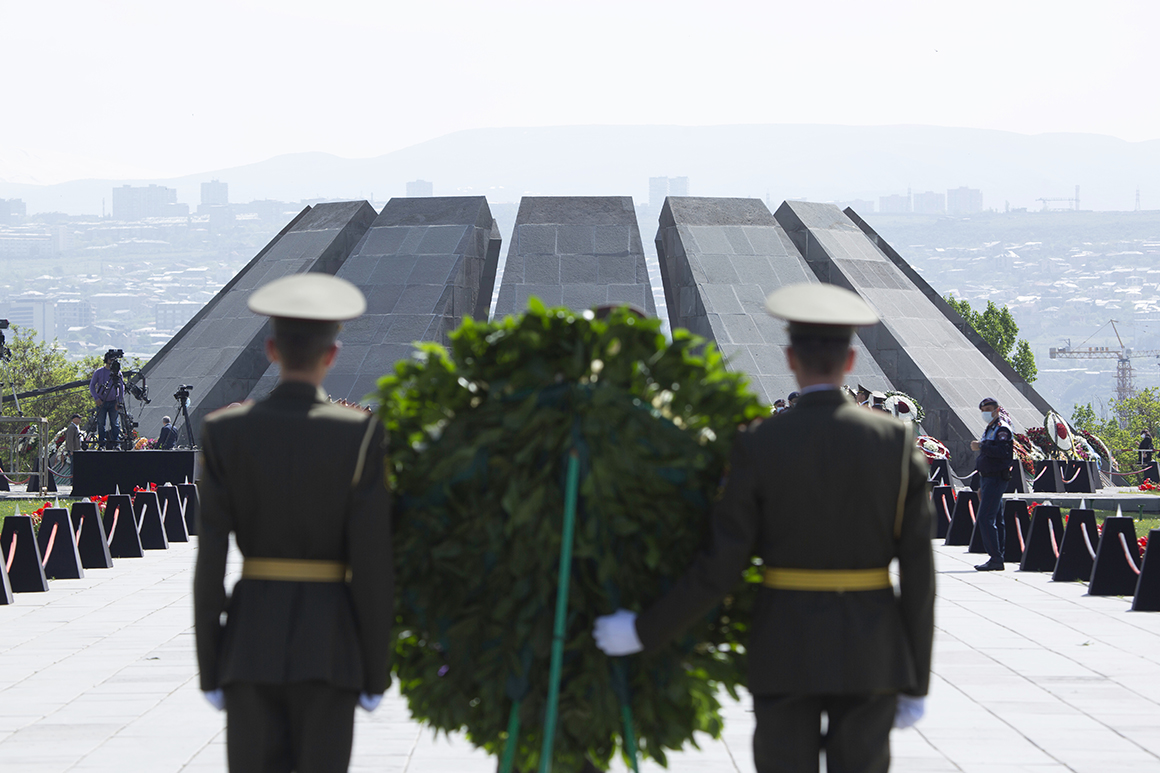 For Armenians around the world, April 24 is known as Armenian Genocide Remembrance Day, a day to recall and mourn the victims of the massacre — genocide in fact — perpetuated by the Ottoman Empire against its ethnic Armenian citizens, starting in 1915. For eight years, first in the Bush administration, then in the Obama administration, I helped draft the U.S. government’s annual statements on that remembrance, none of which used the word “genocide” to characterize what took place.

The facts have long been known. The Armenian Genocide was among the first of the 20th century’s genocidal horrors. U.N. bodies, Pope Francis, the European Parliament, the International Association of Genocide Scholars and many national governments (e.g., France) all recognized the Armenian Genocide. But successive U.S. administrations — Democratic and Republican — did not.

"Each year on this day, we remember the lives of all those who died in the Ottoman-era Armenian genocide and recommit ourselves to preventing such an atrocity from ever again occurring," President Joe Biden said.

Why the long delay? Why did the U.S., champion of human rights, resist use of “the g-word” for so long? When I worked on this issue, my colleagues and I knew the facts of the killings. We did not deny that they were genocide. But we did not use genocide to describe them. We used terms like atrocities, mass killings, slaughter, and mass murder. Strong terms all, but not genocide.

There were two reasons why the U.S. took that position. One, long championed in the U.S. government, had to do with relations with Turkey, a staunch NATO ally during the Cold War and after. Turkey regarded any U.S. use of the word genocide as a redline in relations and made clear that using the term would trigger a harsh reaction. Given U.S. interests in relations with Turkey, particularly military and security relations, such Turkish warnings carried weight. Besides, the U.S. had for decades maintained its close alliance with Turkey despite that country’s authoritarian bent, including a pattern of military rule. The U.S. didn’t much like that but had learned to live with it. In that context, putting the bilateral relationship under stress for the sake of recognizing the Armenian Genocide, something some in the U.S. government regarded as a historical dispute, was simply not seen as worth it.

That sort of “realist school” calculation was common in U.S. government thinking for decades. Support for the Greek Colonels regime after 1967, for the authoritarian Shah of Iran, and for Chile’s military rule after 1973, followed that pattern of swallowing hard yet remaining allied with authoritarian countries. Trying to brush away the Armenian Genocide as an irritating distraction that could disrupt otherwise close U.S.-Turkish relations fit that model. It was the norm for U.S.-Turkey policy for many years. These sorts of calculations made a kind of sense at the time. But they often do not look good in retrospect. Hypocrisy has a price.

I and my colleagues in the Bush administration had another, hopefully better, reason for avoiding use of the term Armenian Genocide: we wanted to encourage Turkey to come out of its shell of historical denial and hostility to Armenia; to find its own way to reconcile with Armenia and its own past.

This wasn’t just wishful thinking. Turkish-Armenian relations were and remain burdened by a lot of issues, including but not only the Armenian Genocide and Turkey’s refusal to look at the that dark chapter in the historical legacy of the Ottomans, but also by terrorism perpetuated against Turks by Armenian terrorist groups. And there is more. When the Soviet Union broke up and Armenia declared its independence, it fought a brief, successful war with another emerging country, Azerbaijan, Turkey’s friend and ethnic cousin, over the disputed Azerbaijani territory of Nagorno-Karabakh, inhabited by a lot of Armenians. As a result of that war in the 1990s, Armenia ended up in effective control of Nagorno-Karabakh and its seven surrounding Azerbaijani regions. To support Azerbaijan, Turkey shut its border with Armenia. So, Armenia had not only its bitter historical experience with Turkey but a current dispute that would not yield to years of diplomacy (in which I also participated) and that left its land border with a NATO country and its best potential economic partner closed.

The U.S. government saw an opportunity for Turkey to make peace with its neighbors and at home emerging in the early years of the 21st century. And it wanted to give Turkey the opportunity to own its history, not to have to react to a U.S. government statement acknowledging the Armenian Genocide.

Starting in 2001, non-governmental Turks and Armenians joined in a reconciliation effort to try to deal with the past and build a better future. In 2002, the new AK Party swept to power in free elections and promised a deepened democracy and “zero problems with neighbors,” as the Turkish saying then went. Soon, the Turkish Foreign Ministry opened a confidential channel to Armenia, with Swiss help and quiet U.S. support, to pave the way for reconciliation, diplomatic relations, an open border, and a commission of historians to examine the past, including “The Great Calamity,” as the Armenian Genocide is often called in the Armenian language. By 2008, the Turks and Armenian negotiators had reached agreement on a text; by 2009, thanks to the able efforts of the Obama administration, they had signed it.

But in the end Turkey — by far the stronger country — could not bring itself to ratify the agreement or otherwise act to reconcile with Armenia. Even though Turkish President Erdogan himself acknowledged in 2014 that the Ottoman treatment of the Armenians was “inhumane,” Turkey did not then or later open its border to Armenia. Senior Turks used to say that they could not do so with the Nagorno-Karabakh dispute pending, given the fierce resistance to any normalization from Azerbaijan. But the Turkish government — not shy about asserting itself — could have acted at some point. It did not. Nor has the Turkish government acted in the wake of renewed fighting last year between Armenia and Azerbaijan, in which Azerbaijan with Turkish help retook much of Nagorno-Karabakh.

READ:  Congress finally gets first chance for answers about the Jan. 6 insurrection

The Bush and Obama administrations showed what they thought was forbearance on genocide question. But that forbearance was not permanent.

The Biden administration, with its stress on democracy and human rights as fundamentals, knew the record: years of efforts to urge the Turkish government to reach out to Armenia and to deal honestly with the Ottoman historical legacy. They would not return to the realist school calculation of the past. And temporary forbearance to encourage Turkey to do the right thing had run its course. So, they decided — finally — to do the right thing.

There will be a price in U.S.-Turkish relations. Hopefully, that will be temporary and not too costly. The US-Turkish relationship remains important. But a line has been crossed. The U.S. will no longer have to engage in elaborate linguistic contortions to remain honest with history and truth while maintaining its immediate interests with Turkey and the region. The Biden team has made a tough, potentially costly, but correct decision.