The sophomore House Democrat has nowhere to go back home in Colorado, at least not anytime soon. 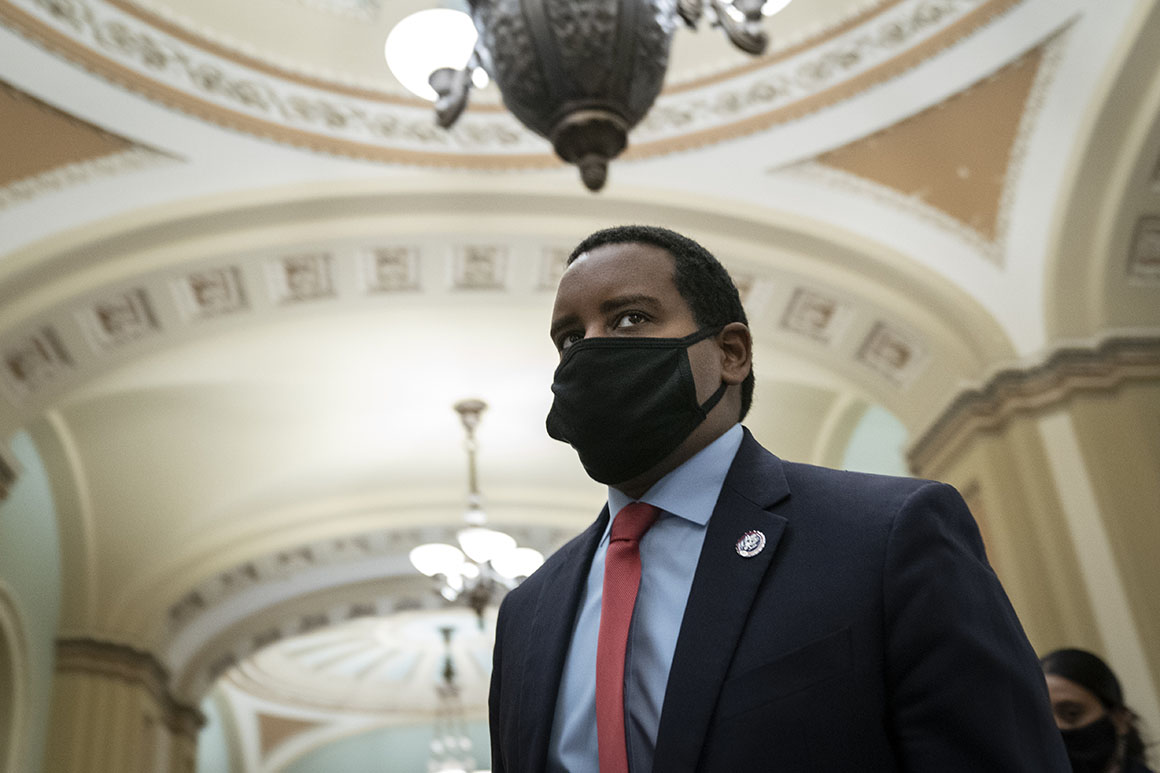 Joe Neguse’s star has risen since his widely praised performance in Donald Trump’s second impeachment trial — everybody in Washington agrees on that. There’s just one problem: risen to what?

The sophomore House Democrat has nowhere to go back home in Colorado, at least not anytime soon. The governor, Jared Polis, is just 45. Michael Bennet, the senior senator, is 56 and popular. And John Hickenlooper just arrived in the Senate after knocking off Republican Cory Gardner; he won’t be up for re-election until 2026.

Still, Neguse, a lawyer who first ran for office in 2014, has all the ingredients for a long career as a House Democratic leader. At 36, he’s already a national figure thanks to his careful demolition of Trump. After winning a safely blue seat in 2018, he promptly landed in House leadership as Democrats’ freshman representative before winning a caucus-wide election this term to help run the party’s messaging arm, a position typically reserved for longtime lawmakers. With Speaker Nancy Pelosi and her longtime deputies, Majority Leader Steny Hoyer (D-Md.) and Majority Whip Jim Clyburn (D-S.C.), expected to retire in the coming years, Neguse could leap up a leadership ladder that usually takes members years if not decades to climb.

It doesn’t hurt that fellow Democrats all see Neguse as a nice guy — quick with a smile, self-aware and self-deprecating. He’s got a compelling personal story as the son of Eritrean refugees and hasn’t become a GOP target like some of his higher-profile colleagues. In a Washington typically dominated by the loudest and brashest voices, Neguse stands out as a member whose sheer friendliness has convinced colleagues to vault him to prominence.

But ask him about his seemingly limitless opportunities and he’s quick to mention the lure of his Colorado home — swearing that he hasn't thought much about his future in the Capitol.

"Five years from now, I hope I’m coaching my daughter’s Little League team," Neguse said when asked how he envisions his career in the medium term. He acknowledged a desire to be in Congress too, and certainly didn’t rule it out, but said the challenge of being away from his wife and daughter is "part of the analysis.”

To the extent he wants to capitalize on his newly high profile, Neguse already has senior Democrats in his corner.

“We’re like brothers, at least from my perspective,” said Rep. Jamie Raskin (D-Md.), who led the team of impeachment managers at last week’s trial, “although he keeps saying I’m the father figure."

“I just think he has accomplished a lot in a short period of time in Congress to establish himself,” adds Rep. Adam Schiff (D-Calif.), who ran the House’s first impeachment trial against Trump.

Neguse, a member of the Judiciary Committee, has been central to every major Trump-focused investigation since Democrats took the House in 2019. He helped lead a band of allies to keep the pressure on to impeach Trump over the findings of former Special Counsel Robert Mueller's investigation, before explosive revelations about the president’s threats to Ukraine supercharged the effort.

While other Democrats involved in Trump oversight caused friction within the party for pushing past where Pelosi was ready to go, Neguse emerged unscathed.

Now Neguse is one of four co-chairs running the Democratic Policy and Communications Committee, the panel ostensibly tasked with shaping the caucus’ messaging. With four equal leaders, it’s hard for any one person to stand out there. But the position keeps Neguse at the leadership table and in the room as Pelosi and her team make critical decisions about the party's agenda.

As House Democrats start to prepare for a change at the top for the first time in two decades, the private chatter about who might ascend in the next crop of leaders — from the speaker on down — has only intensified.

But younger members like Neguse, and a growing crop of fellow Democrats, are feeling the strain of extended stays in Washington while spouses and children stay home remain in their districts. Neguse said he gets support from an informal group of Democrats in his age group who commiserate over being away from their families for long stretches.

Reps. Colin Allred (D-Texas) and Andy Kim (D-N.J.) are part of that group, Neguse said, and "some of my closest friends in the Congress." He mentions former Rep. Max Rose, who was defeated in 2020, and Antonio Delgado (D-N.Y.) as well.

"It’s nice to have a sounding board of colleagues and friends who you can talk to about managing all the different complications that can come from living on the road," he said.

His feeling of longing was at its most intense a month ago, when Neguse placed what he thought might be his final call to his family during the Jan. 6 insurrection that overran the Capitol and sent lawmakers fleeing for safety.

“I texted my wife. I told her I loved her very much, I love my daughter … very much, to tell my parents I was fine and that everything was OK,” Neguse told POLITICO at the time.

He wasn’t actually sure everything was OK, he added then. “It felt like the right thing to say.”

Now Neguse is back in Colorado for a brief respite after Trump’s whirlwind second impeachment trial ended Saturday in acquittal. Democrats predicted that Neguse and the other managers would be remembered not for failing to secure a conviction, but for making a compelling case against Trump despite long odds.

“The only advice I gave, because this is such a different case and such a different time than it was when we were prosecuting our trial, was just to try to be sensitive that you’re speaking to two different audiences,” said Rep. Jason Crow, a fellow Colorado Democrat who was a prosecutor in Trump’s first impeachment trial.

Neguse’s concise argument for the trial’s constitutionality earned quick plaudits from allies and adversaries alike, and he saw a measure of success in his closing speech on the trial’s last day — which he tailored to appeal specifically to Senate GOP leader Mitch McConnell.

Neguse’s closing speech referenced one of McConnell’s heroes: John Sherman Cooper, a Kentucky senator during the 50s and 60s. And it included a conspicuous reference to the Senate’s 1986 vote to override Ronald Reagan’s veto of a bill imposing sanctions on South Africa during apartheid.

“Two senators who are sitting in this room, one Democrat and one Republican, voted to override that veto,” Neguse said during his closing remarks. The Republican who cast the politically volatile vote to override Reagan's veto was McConnell. (The other was Sen. Patrick Leahy [D-Vt.], who presided over the impeachment trial.)

McConnell ultimately voted to acquit Trump on procedural grounds that Democrats dismiss. But the Kentucky Republican then turned around and ripped Trump in a fiery speech that sounded like it could just as easily have been in support of a conviction. Neguse was listening closely to the GOP leader.

McConnell's "statement was so remarkable because it largely mirrored the language we had used during the court of the trial,” Neguse said later, recalling that he and the other managers watched it in real time from a holding room just off the Senate floor.

"We took solace in the fact that on the merits, it was clear that we had [convinced] far more than 57 senators who ultimately voted to convict."