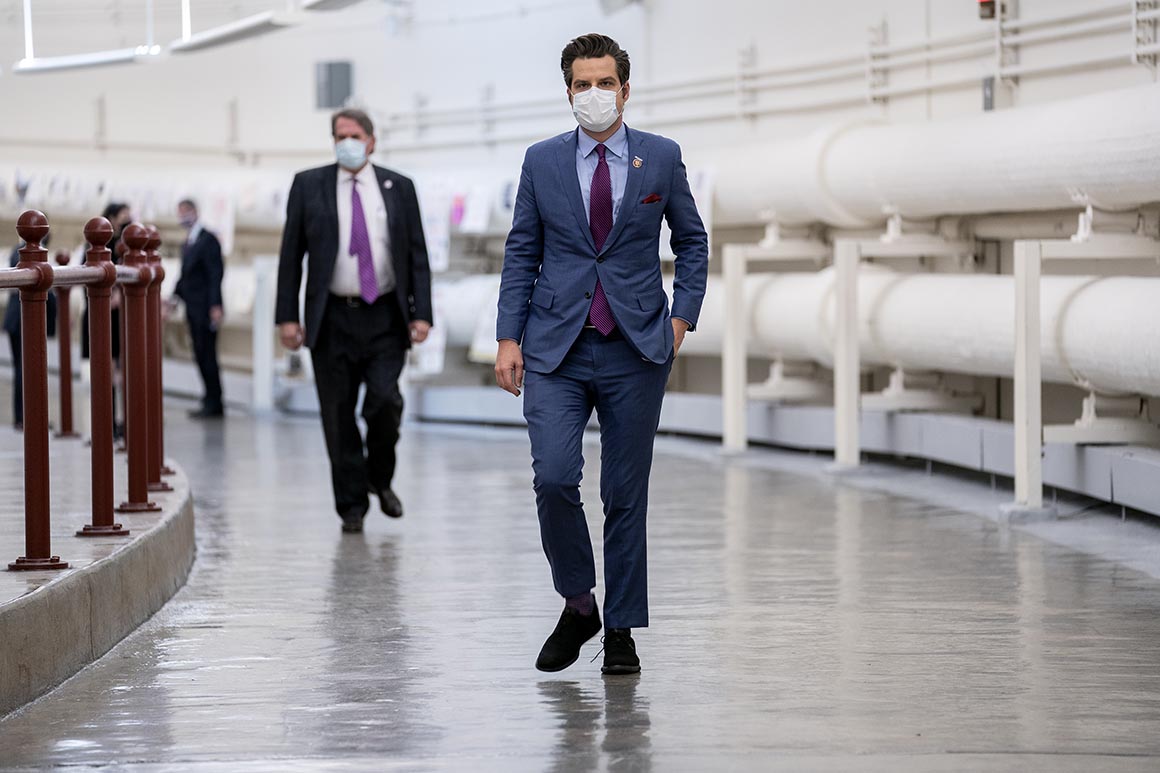 Rep. Matt Gaetz fired off a barrage of insults against his colleague Liz Cheney during a rally in her home state of Wyoming on Thursday — a raw embodiment of the cleavage across the Republican Party following President Donald Trump's exit from office.

Gaetz's rally flouted Republican leadership's appeal to temper the intraparty conflict. House Minority Leader Kevin McCarthy urged members of his caucus Wednesday to lay off the attacks on each other.

But Gaetz held back no punches as he attacked his colleague.

"Defeat Liz Cheney in this upcoming election, and Wyoming will bring Washington to its knees," he told a group of hundreds of spectators, many of whom did not wear masks. "How can you call yourself a representative when you don't represent the will of the people? That's what all the neocons ask about the Arab dictators. I figure maybe we ought to ask the same question of a beltway bureaucrat turned fake cow girl that supported an impeachment that is deeply unpopular in the state of Wyoming."

Gaetz revealed his intention to campaign against Cheney after she and nine other House Republicans voted to impeach Trump for inciting an insurrection on the Capitol. The measure was the most bipartisan impeachment in U.S. history. But the move against a president who has become a rousing figure for his party sparked vitriol, with calls for Cheney's ouster from her leadership position among the caucus' right flank.

But talk of impeachment made only a glancing appearance in Gaetz's rally Thursday. The congressman mostly opted to portray Cheney as in cahoots with Senate Minority Leader Mitch McConnell and Democrats like President Joe Biden and House Speaker Nancy Pelosi to sustain a status quo that works for Washington at the expense of main street America. He accused Cheney of being out of touch with the cowboy values of her home state of Wyoming, calling himself a supporter of "prairie populism."

"The truth is that the establishment in both political parties have teamed up to screw our fellow Americans for generations," Gaetz said. "The private insider club of Joe Biden, Mitch McConnell, Mitt Romney, Nancy Pelosi and Liz Cheney, they want to return our government to its default setting: enriching them."

The claim that Cheney and her Democratic counterparts are batting for the same team came in contrast with the congresswoman's simultaneous introduction Thursday of legislation challenging Biden's recent executive order on energy production.

Gaetz also attacked Cheney for the role her father, former Vice President Dick Cheney, played in the wars in Iraq and Afghanistan. He disparagingly called Liz Cheney a "neocon," saying she advocated unnecessary wars in the Middle East.

"The real cowboys, I guess, fought the Indians so they could use the land, but what are America's soldiers even fighting for that Liz Cheney sends around the world?" he added. "Places that most Americans couldn't even point to on a map."

Much of the event followed Trump's rally playbook, with talking points mirroring the former president's bombastic public comments. Trump frequently expressed his contempt for Cheney while he was president, telling his supporters shortly before they stormed the Capitol on Jan. 6: "We’ve got to get rid of the weak congresspeople, the ones that aren’t any good, the Liz Cheneys of the world."

READ:  Biden backs up Tanden as Republicans attack her tweets

At one point, Gaetz even echoed Trump's disdain for developing countries in a dig at Congress, saying: "A nation that sends its best to fight in the worst nations in the world should not send its worst to be its representatives in the United States Congress."

Cheney's team has largely brushed off Gaetz' attacks, with one member of her office telling CNN this week: "Rep. Gaetz can leave his beauty bag at home. In Wyoming, the men don't wear make-up." (The dig is an apparent reference to Gaetz's use of makeup in an HBO documentary about his time in office).

In a statement to POLITICO, former Wyoming State Rep. Amy Edmonds put it equally bluntly Thursday: "Wyoming doesn’t like it when outsiders come into our state and try to tell us what to do."