Racism permeated the culture of the department. But there are ways to change that culture that other cities can copy. 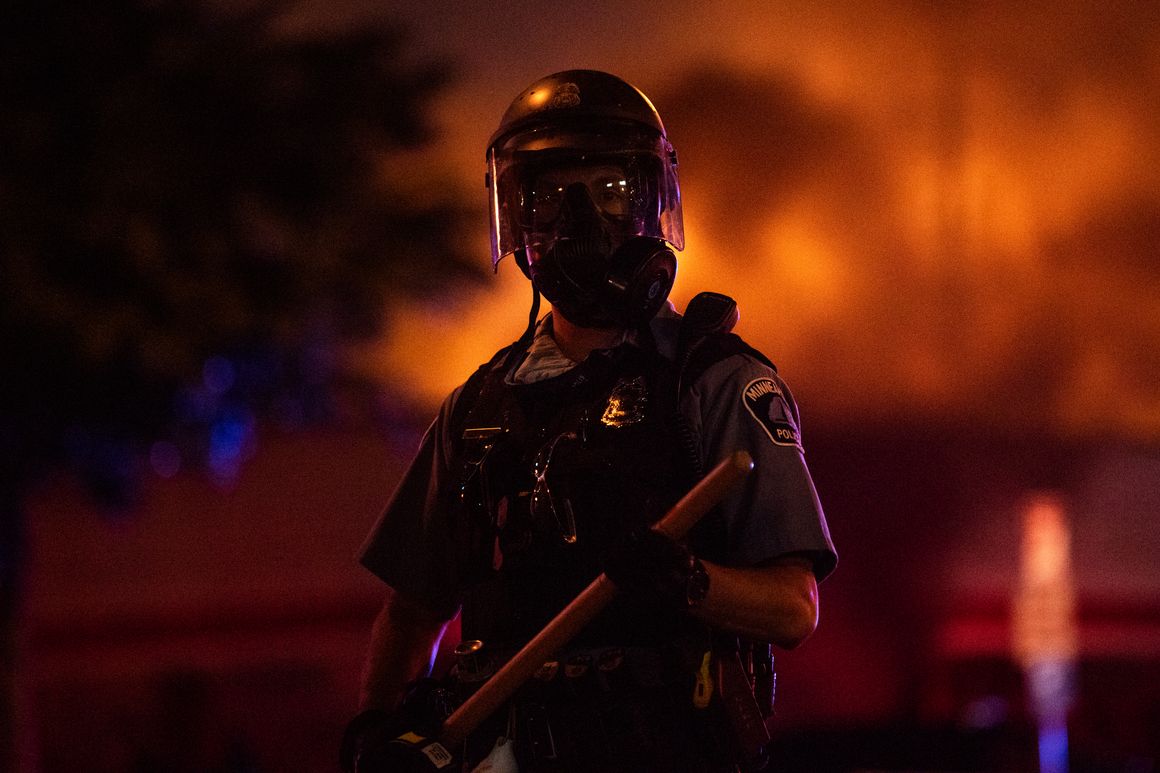 The searing images from the past several nights of anger and violence in dozens of cities across the country have shocked and horrified the nation. But there is one image that we need to keep fixed in our minds, the one that started it all:

A human being, staring calmly off into the middle distance, while his knee slowly suffocates another human being.

Our repulsion should boil over as we realize that the white police officer, who took an oath to protect and serve that person on the ground, who is black, would not have acted so brutally if the man he was restraining were white. Until every one of us can see that image for what it is—an example of a two-tiered justice system that treats black and white people differently—we cannot move another inch forward. We need to acknowledge that on some level, every one of us had a role in keeping this inequity in place.

I’ll go first, because after living in Minneapolis all my life, covering the Minneapolis Police Department as a Minneapolis Star Tribune reporter and, more directly, serving 12 years as mayor of this city, I should.

My own efforts to change a police department and its culture failed badly. That starts with appointing three different police chiefs who all made change but not enough. It includes attempts to diversify the force, to change practices in mental health and numerous efforts to work with individual officers on softening their approach so they could empathize more deeply with community. These failures will haunt me for the rest of my life, and it should. As each of us sees and acknowledges our own part it can be paralyzing. It was for me.

But I was heartened by something a colleague at the Minneapolis Foundation said to me the other day. Chanda Smith Baker grew up and raised a family as an African American in north Minneapolis, and for years has lead the Pillsbury United Communities. She has seen so many more of the consequences of our deep, endemic racism than I ever will. But as we surveyed the damage and pain in our community she said simply: “We have no choice but to act.”

So we are acting. Our foundation, which has been centered on racial equity for decades, is granting $1 million in the next few weeks to community-based solutions that strive for justice and healing in the aftermath of George Floyd’s death in police custody. Knowing we need to have tough conversations about race and culture, we launched our “Conversations with Chanda” podcast that will give our community, which has avoided those tough conversations for too long, the space to “go there.”

Like everyone in this city, we know that is still not enough. A very well-intentioned friend asked me what one thing he could do to make this situation better. I had to say, “There’s no one thing.” You can’t fully stop racism in policing without understanding the racism in the laws we ask our police to enforce, the racism in a criminal justice system that over-incarcerates black men, the racism in how we white Americans perceive a threat when we see someone who is black. An unjust economic system matters, and so does the issue where I focus most these days: the intolerable racial inequities in education. So does the classism that allows so many of us with privilege to have someone else’s child put on a police uniform and walk into tough situations so we can safely, mindlessly go about our lives.

But, right now, nothing matters more in Minneapolis than reforming the city’s police. An obvious first step would be to demilitarize the department. As a mayor who took office right after 9/11, I quickly saw that the community-based preventive programs like Bill Clinton’s “cops on the streets” initiative lost funding while we seemingly had a blank check for equipment and weapon systems that too often have the officers we want to “protect and serve” separated from their communities by shields and armored turtle suits.

Fortunately, we don’t need to invent a solution from scratch. We already have the Obama administration’s “21st Century Policing Plan,” which lays out in detail how our country’s police departments can be rebuilt around six pillars: building trust and legitimacy, policy and oversight, technology and social media, community policing and crime reduction, training and education and officer safety and wellness.

One of the most important values I took from that plan is something I learned on a deeply personal level as a mayor: Police officers are human beings. We then train them, put them with others we have trained into cultures that develop around the job and expect them to perform in the most high-stress situations imaginable.

READ:  Biden to Putin: Help me help you

We also know a lot about what makes that human being performing as a police officer thrive in the job or become a headline from a searing incident we could have prevented. The Center for Data Science and Public Policy at the University of Chicago has studied officer conduct over time in major departments and analyzed what actions signal when behavior starts to go off track. This helps us act more quickly when we need to intervene so that officers can be retrained or treated, and get back on track.

When I first saw this research, I realized that if, as mayor, the police chief and I, and the department’s supervisors, had known early when our officers needed our help and attention, we could have saved tens of millions in settlements costs and scores of lives. The problem was we never had the technology or tools to connect in real time what was happening with each officer and we didn’t have access to what we now know about how to step in.

That’s why I joined the founding board of Benchmark Analytics, which is now using that work in 60 cities and the state of New Jersey to connect department internal personnel systems to that deep research so mayors and chiefs can do what I never could to prevent the next tragic incident.

There are many more specific actions that can be taken but above all we need to address police culture. I have never been a police officer, so my experience is limited to what I have seen as a reporter and mayor. But I have come to know so many officers and continue to struggle with how I can know so many truly committed people whose collective actions I don’t recognize. In my city, at least, we have a majority of officers who let a minority of officers create an us-vs.-them culture that over time dehumanizes the people and neighborhoods the officers are supposed to protect and serve. Throw race into this toxic mix and you end up with behavior that often has to be named for what it is: racism. It plays itself out when a knee stays on the neck of a human being treated like he’s not human.

READ:  Open schools are the exception, not the rule, around the world

Much has been written by people who know more than I about police culture, but I do know it can be reformed only from within. That means the majority of officers need to rise up and take control of their culture. To the many good officers I know exist, I say this: I know the consequences of being shunned by your co-workers, but I also know you in your heart that George Floyd should not be dead. Your silence is deafening and this city, and this country, cannot move forward until we hear your voices.

There is good news. We have stood at this place before, in Minneapolis and across the country. Yes, this might seem like the beginning of a familiar and dispiriting cycle: a terrible incident, a few days of promises and then, as the attention fades, so does the hope of change. But I also know that this is not a predestined conclusion. Change is possible. I know because I have seen it before in this very city.

All these years later, one of those groups has seen enormous change. The Minneapolis police, which back then routinely beat and humiliated gay residents, is now one of the most gay-friendly departments in the country with openly gay officers serving in every part of the force, including at one point, the role of chief. There was no one action that made that possible, instead, in thousands of interactions, that wall creating an us vs. them turned into a we because each group recognized we are human beings on the other side.

The fact that we have seen so much progress with gay residents and almost none with black residents says a lot about the perniciousness of racism. We need to own that. But it does also say that change is possible, and now we have to prove that is true.