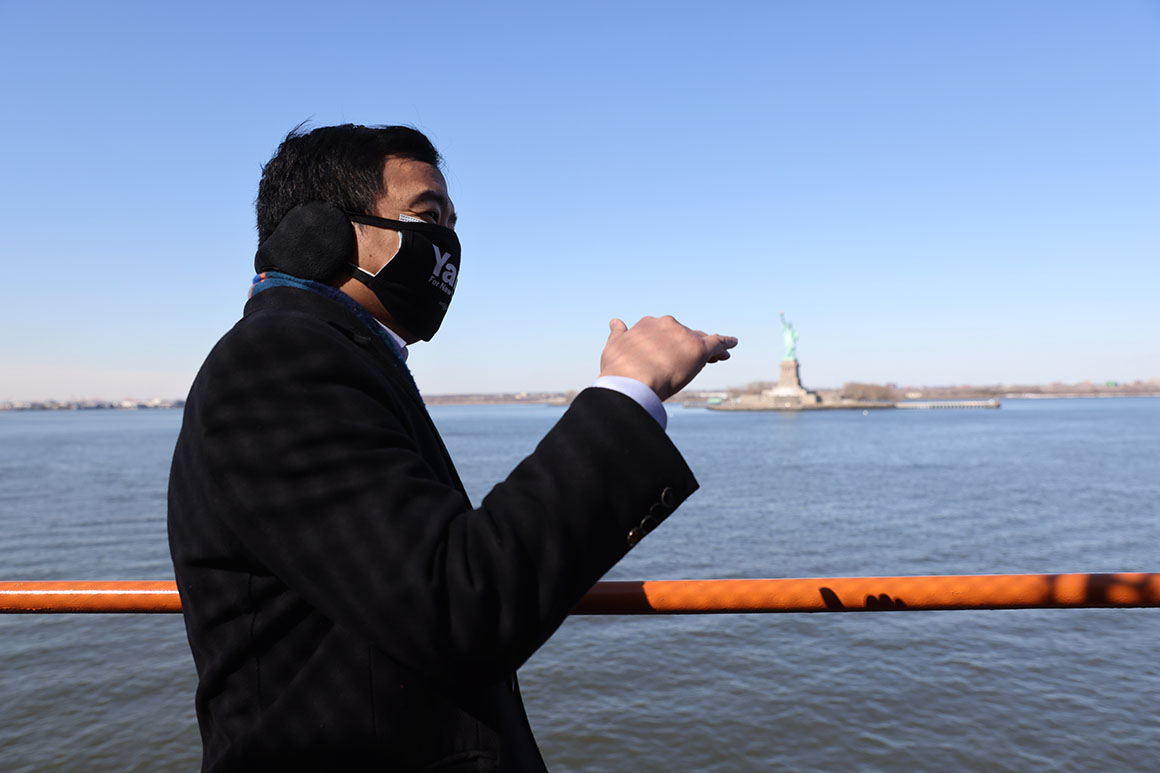 Andrew Yang’s road to fame was paved with right-wing podcasts.

Before he joined the New York City mayor’s race in January or even appeared on a presidential debate stage during the Democratic primary, Yang reached an audience of millions through an unconventional venue: shows that promoted a strongly anti-progressive point of view.

During one interview last May, Yang said, “There are many elements of Trump voters that I completely get and empathize with” before describing people who had become disaffected with corruption and “checked out of politics.”

In another he suggested automating the jobs of fast-food workers, who would be embroiled in a local push for unionization just months later.

And during a show in June 2019, he said the Democratic Party “needs to try and gravitate away from identity politics,” calling it a “stupid way to try and win elections,” admitting he had very little interest in engaging in New York politics at the time.

Yang told Dave Rubin — whose podcast The Rubin Report has interviewed white nationalists, white supremacists, conspiracy theorists, anti-Islamic activists and anti-feminist media personalities — that he “came of age during the first Clinton term” and considered himself a Democrat.

“I wasn't actively involved in local politics and I was living in New York, and as you know, New York is so blue that there isn’t that much to be engaged with, politically,” Yang said.

Yang also made appearances on The Ben Shapiro Show, The Joe Rogan Experience, and Tucker Carlson Tonight to promote his candidacy. By then these shows had built a reputation as highly critical of progressive policies and “woke” culture — a viewpoint that had built them a collective, nationwide audience of millions.

His appearances were the most high-profile examples of a history on the campaign trail espousing views that were antithetical to today’s current Democratic party — part of a strategy to win back white, working-class workers who swung for Trump in 2016. At that time his views weren’t too distant from other centrist candidates, who shied away from embracing progressive issues, particularly those related to “culture war” topics.

Primary voters across the five boroughs generally support labor unions, take into account a candidate’s race and ethnicity and veer farther left in their politics. In recent years traditional Democrats who suited voters for decades were toppled by even farther-leaning upstart progressives like Rep. Alexandria Ocasio-Cortez. Even Brooklyn Borough President Eric Adams, a moderate in the mayoral field this year, celebrated winning support from a trio of influential unions last week.

Yang’s political leanings in this field are as unorthodox as his candidacy itself — a novice to local politics who vaulted to frontrunner status even as news coverage focused on his escape from the city during the height of the pandemic, his spotty voting record and staff complaints about a hostile work culture in his presidential campaign.

In an interview with POLITICO this week, Yang characterized his media strategy as an underdog’s effort to boost his profile while broadening his appeal beyond Democrats.

“I was trying to, frankly, get people to pay attention to my campaign and the ideas about automation and universal basic income,” he said, referring to his signature presidential campaign policy that he has recast in the mayor’s race. Where his federal plan would not have applied to undocumented immigrants, a municipal version of the policy clearly states it would — perhaps another recognition of the more liberal political climate here.

As he and Rubin discussed automation, Yang said, "If you take these people who are working in fast-food restaurants — and these jobs get automated away — and in my mind they should be automated away. Trying to preserve these jobs is not where we should be going."

He told POLITICO that he would only support automating those positions if the affected workers had better job alternatives.

“Right now, given the way our country operates, it’s hard to say that people who lost these jobs would have an effective safety net or a path to better opportunities, but in an ideal world they would,” he said. “But unfortunately, we don't live in that world.”

Yang’s past comments hint at a general skepticism of large government — a contrast to outgoing Mayor Bill de Blasio, who has expanded the city workforce and ballooned the budget.

“I’m no fan of big government. The larger an organization is, the more cumbersome and ridiculous it often gets,” Yang wrote in the “Human Capitalism” section of his book The War on Normal People.

He also did not rule out charging city workers more toward their health care premiums in a policy questionnaire POLITICO sent to the mayoral candidates in January. “I am not inclined to balance our budget in this way, although I do understand that this is one of many options on the table,” Yang said.

Yang’s podcast appearances were hosted by a loose collective of political commentators immortalized in a New York Times profile in May of 2018 as the “intellectual dark web” — a term coined by podcast host and Thiel Capital manager Eric Weinstein. The shows frequently cover traditional gender roles, masculinity, criticism of “woke” policies and socialism — and presaged today’s right-wing backlash against progressive “cancel culture.”

Members of the IDW were intrigued by Yang’s income proposals — not because they necessarily agreed with him, but because he was being ignored by mainstream media outlets at the time.

“I think it was that openness to conversation — his unwillingness to be boxed into only talking with the approved class of Left-wing pundits — that endeared him to the IDW,” Shapiro told POLITICO via Twitter direct message.

Sam Harris, a liberal member of this group, was the first to host Yang on his podcast in mid-2018. During a wonky 24-minute interview, Yang offered a brief biography of himself and described the argument behind his basic income plan.

“I suspect that you and I are kind of similar — traditionally Democrat leaning,” he told Harris. “I consider myself something of an independent at this point, though I line up with Democrats and liberals on most social priorities.”

READ:  Cuomo clamps down, but not as hard as de Blasio wanted

The social climate has shifted dramatically since 2018.

Last November, Harris, a vocal Trump critic, publicly distanced himself from the IDW after several of its members began pushing what he condemned as “delusional” conspiracy theories about the 2020 election, criticizing it as an “imaginary organization” obsessed with attacking the far left. (Harris did not return a request for comment.)

When Yang appeared on Rogan's show in February 2019, he met 6 million listeners. “Happily, everybody who’s a fan of yours, which is apparently everybody, now knows that I’m running,” he told Rogan.

Yang soon appeared on Ben Shapiro’s Sunday Show for a 65-minute interview, sparring over the economics of his UBI proposal.

Shapiro, a right-wing commentator with one of the most popular podcasts in the country, told POLITICO he found Yang “delightful.” He said Sunday Special had requested interviews of every Democrat candidate running for president that cycle, but only Yang “had the stones to come on the show.”

Yang, however, directly sought out Rubin, who was closely identified with the IDW and was frequently accused of giving uncritical platforms to people associated with far-right ideology. In prior years, Rubin interviewed Yiannopoulos, Pizzagate promoter Mike Cernovich, the anti-feminist Gamergate personality Sargon of Akkad, Candace Owens and white supremacist internet personality Stefan Molyneux.

“I don’t think it’s a great way to try and build consensus, or bring people together, or get big policies across the finish line. And I think it’s a kind of stupid way to try and win elections,” Yang said. “I think the Democratic Party needs to try and gravitate away from identity politics and towards things that would actually bridge the gap.”

Yang did not distance himself from his comments and said he did not regret his appearances.

“If you asked Democratic voters in Iowa or New Hampshire or anywhere around the country what their main criteria was for the Democratic nominee, it was the ability to beat Donald Trump. That is one reason why Joe Biden eventually became the nominee,” he told POLITICO this week. “So the case that we were making at the time, was that, look, Andrew Yang can peel off seven to 10 percent of Trump voters.”

Tweets from his presidential campaign manager, Zach Graumann, show an organization proud to have attracted positive attention from MAGA supporters. “You know you’re onto something when you’re a Democrat and the conservative blogs write an article on you that DOESN’T bash you,” Graumann tweeted in February of 2019, linking to a Daily Caller item about Yang’s Rogan appearance. He later boasted about getting selfie requests from Fox News producers.

That attitude carried past the election, when Graumann criticized Trump’s Democratic critics in the midst of the former president’s conspiratorial claims that the election was “stolen” from him — rhetoric that eventually led to the Capitol Hill insurrection on Jan. 6.

“Feel like we all need to chill. Trump was usually a jerk. Many Dems were just as bad in their intolerance of him,” Graumann wrote on Nov. 9, 2020. “But most of us are just regular Americans who think govt is best when there’s balance between the left and the right. Let’s move on and save the country.”

Days later, he accused Twitter of deleting one of his tweets that joked about Democrats rigging elections.

Yang told POLITICO he disagreed with Graumann’s comments: “I think his statement falls into something of a bad habit of trying to cast things in an equal light when I don't think they are.”

Yang’s appearance on the shows underscores his loose connection to the Democratic label common among most New York City voters.

“I certainly line up with the Democratic Party on virtually all of the social issues so there was that, but I’m a numbers guy and I actually felt like oftentimes Republicans were responding better to numbers than other people,” Yang said on a show hosted by a self-described “Trumper for Yang.”

“As a life-long Republican, I support universal basic income and nearly every single policy on Andrew’s lengthy Yang2020 platform,” the host, Dennis Dean, told POLITICO. “I am on record being against his mayoral run as I believe he would make a larger impact on our country running for federal office, not local.”

Asked if he would continue appearing on these shows as he's running for mayor, Yang didn't rule it out, but said he'd carefully consider who he sits down with.

"I have not kept track of what's happened with some of these personalities. So I'd have to review what they've been up to, frankly, over the last number of months," he told POLITICO. "If someone is genuinely engaging in honest conversations, then I'm happy to sit down with folks. I don't expect to agree with everything they think or believe or vice versa. But if someone has crossed a line from honest conversations into things that are destructive or divisive, then I wouldn't go on their program."

“I don’t think the orthodoxies of the past are going to dictate this election,” Phillips said. “And I think part of the appeal of him, in my view, is he’s authentic. And that’s really powerful and I think these are examples of that authenticity, even if some of them are harder to explain than others.”

Joe Anuta contributed to this report.