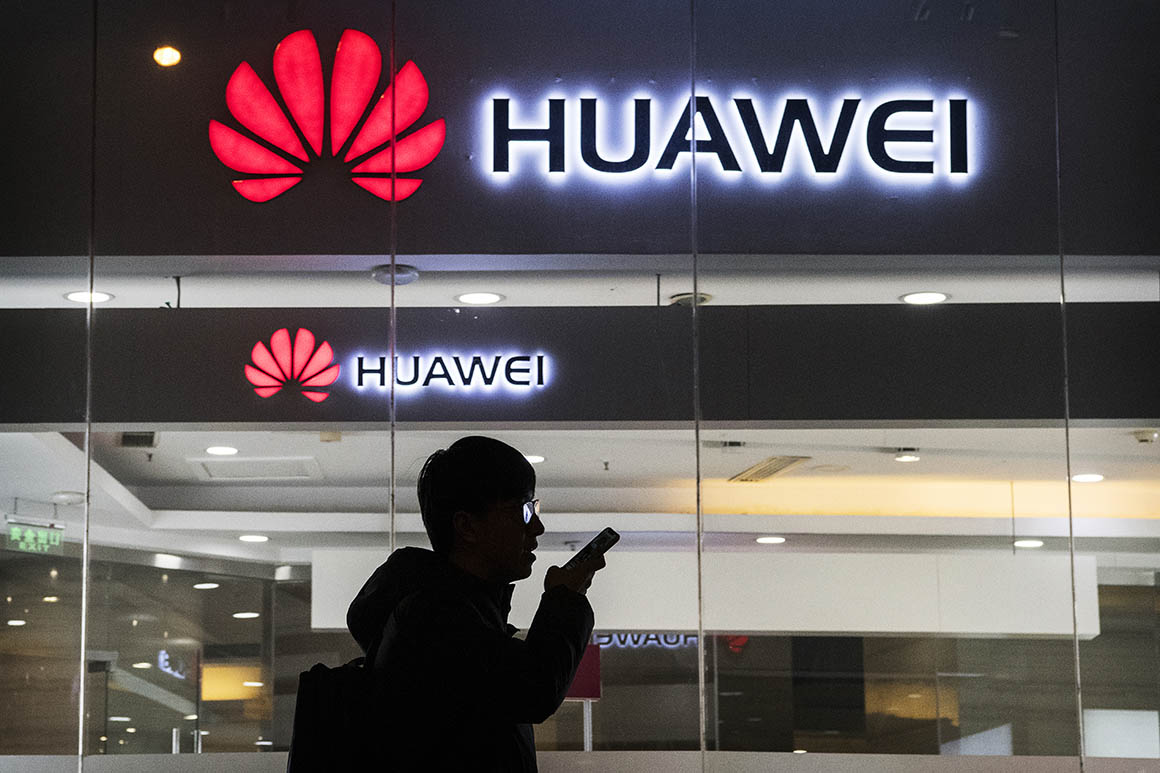 The internal company records describe how Deutsche Telekom and Huawei agreed on a deal in mid-2019 that said the Chinese supplier would take measures to avoid supply chain disruption caused by U.S. measures, as well as cover the costs of potential damages and delays.

The deal was struck just weeks before the U.S. administration imposed restrictions on businesses dealing with the Chinese firm in May 2019 — a milestone for Washington's efforts to push back against Huawei's dominance on 5G equipment.

It laid the groundwork for a partnership between the two companies for the early rollout of 5G networks in Europe, despite national lawmakers' efforts in key markets like Germany, the Netherlands and Poland to reduce the use of Chinese equipment.

In the months after the deal, the companies underlined mutual commitments to treat each other in preferential ways. Deutsche Telekom executives described Huawei repeatedly as a "strategic partner" that is "key for our 5G plans," according to the internal documents. On Huawei's end, Deutsche Telekom was described as a "preferred customer" for its 5G equipment.

Deutsche Telekom has repeatedly declined in the past to disclose how much of its networks consist of Huawei equipment.

But in its internal communication, it has likened the scenario of not being able to use Huawei in its broader 5G rollout to "armageddon," a recent report in German paper Handelsblatt showed.

A spokesperson for Deutsche Telekom declined to comment on questions related to the documents but said the company "takes the global discussion about the security of network elements very seriously."

The spokesperson added: "We are already pursuing a multi-vendor strategy for the network elements used all over our networks. We buy from a variety of vendors like Ericsson, Nokia, Cisco, Huawei and many others."

At the core of the mutual agreement is a commitment by Huawei to shoulder the burdens and costs of the U.S. restrictions that have bogged down the Chinese vendor in the past year.

"This pledge by Huawei to pay for any disruption adds to that incentive to stick with Huawei," said Thorsten Benner, director of the Berlin-based Global Public Policy Institute, calling it a "care-free package" offered to Deutsche Telekom.

The deal includes a clause that annulled provisions if local regulations and trade controls prohibited Deutsche Telekom from acquiring and using the products.

A spokesperson for Huawei said the company "never comments on any specifics of deals or contracts with our customers worldwide." The spokesperson added: "We have worked successfully with Deutsche Telekom in many areas over many years and look forward to continuing this cooperation.”

The agreement laid out in internal documents instructs the Chinese equipment-maker to set up emergency stocks of spare parts in countries where Deutsche Telekom has local operations. That includes Germany, Poland, the Czech Republic, the Netherlands and Austria.

It also softened the blow as Huawei started grappling with delivering "small cells" used to increase local network capacity for mobile internet users. These components suffered a big hit due to the U.S. restrictions last year.

At the end of 2019, the two companies held advanced discussions on a major 5G deal that would have cemented their partnership, Reuters reported in December, citing three sources familiar with the matter. The operator however put that deal on hold due to political concerns, the news service wrote.

The companies' dealings largely defied efforts by security officials to reduce Europe's reliance on Chinese equipment in 5G networks during 2019.

The U.S. administration started warning European counterparts in 2018 about the risks it associates with Huawei, arguing it is under direct influence by the Chinese state. In May 2019, Washington imposed export controls that hampered Huawei's suppliers of chips, software and other components from selling to the Chinese company.

In Europe, security officials started looking into the security risks in early 2019. From as early as March 2019, the European Union worked on common measures that aimed to decrease Europe's reliance on equipment from Huawei and its smaller Chinese competitor ZTE.

The security concerns have prompted a number of countries to ban Chinese suppliers in "core" parts of 5G networks.

It has also prompted some operators to "swap" Huawei equipment for kit from its European competitors, Sweden's Ericsson and Finland's Nokia, in new 5G rollout plans, including in Denmark, Ireland and Norway. It has also prompted promises from large operator groups, including Deutsche Telekom, to phase out Chinese suppliers from "core" networks to alleviate security concerns.

Allegations that Huawei poses a security risk largely fell on deaf ears at the German chancellery in Berlin.

Chancellor Angela Merkel "threw all her political weight behind keeping Huawei, at least for some part, in Germany," said Benner.

In the past year she dismissed growing pressure from her junior coalition partner SPD in parliament, part of her own conservative faction and even government ministers like Foreign Minister Heiko Maas to impose much tougher restrictions on Chinese vendors to participate in Germany's 5G rollout.

Merkel's stance reflected warnings by Deutsche Telekom — of which the German state holds a 14.5-percent stake — that a ban on Huawei gear would put 5G rollout at risk of delays and huge extra costs. Other German businesses, including the powerful automotive sector, also fear banning Huawei could lead to retaliatory measures in China that hurt their profits.

"Merkel's chief concern is about retaliation on German companies in China," said Benner. "It's not Deutsche Telekom's pressure that's driving this ... but rather the concerns about German businesses and large German companies that depend on the Chinese market."

Deutsche Telekom also resisted the U.S. government's pressure to drop Huawei — at a time when it was seeking approval from U.S. regulators for a major telecoms merger with local operator Sprint.

As it sought government approval for the deal, T-Mobile U.S. executives took a radically different approach to the use of Chinese vendors than the group's leadership in Bonn.

John Legere, then-chief executive for T-Mobile U.S., last year testified to the U.S. House of Representatives in a hearing on the Sprint merger that "we do not use Huawei or ZTE network equipment in any area of our network. Period."

Legere added the U.S. operator would buy equipment "only from trusted network equipment suppliers with a strong security track record in the United States." The operator's position complies with U.S. policies that ban the use of Huawei and ZTE equipment.

The U.S. operator is also at the center of a landmark indictment unsealed by the U.S. Department of Justice last year that alleges Huawei attempted to steal trade secrets in 2012-2014.

Huawei's spokesperson said: "Huawei and T-Mobile settled their disputes in 2017" over the allegations of corporate espionage, adding that an earlier U.S. jury verdict found "neither damage, unjust enrichment nor willful and malicious conduct by Huawei in T-Mobile’s trade secret claim.”

For Huawei in Europe, being able to supply Deutsche Telekom meant a near-guarantee that it would hold a strong position on the European market for years to come.

The German operator is Europe's largest telco group and has operations in more than 50 countries, including 17 EU member countries. It serves 184 million mobile customers worldwide, it said. It is also the largest shareholder of U.S. network operator T-Mobile.

The company has supported new cybersecurity legislation that would raise requirements for all 5G equipment vendors — Chinese and European alike — through technical measures. It also said last year that it planned to "phase out Chinese suppliers from the safety-critical core network," a smaller part of procurement spending for telecoms networks.

For their "radio access networks" (RAN) — which account for the largest chunk of mobile network equipment spending — a new report by telecoms consultancy firm Strand Consulting estimated Deutsche Telekom's local affiliates, Magenta Telekom in Austria, T-Mobile in the Netherlands and T-Mobile in the Czech Republic, rely exclusively on Huawei. T-Mobile in Poland would rely on the Chinese vendor for more than half of its RAN network, too.

Local affiliates in Romania, Slovakia and Greece on the other hand would rely on European vendors Ericsson and Nokia for RAN equipment.

In its home market, Germany, Deutsche Telekom is estimated to rely on Huawei for 65 percent of its base stations and antennas, according to Strand's report.

These figures describe the group's 4G radio access networks, which it is currently upgrading to provide an initial 5G offering in Europe.

The operator announced in mid-June that it had rolled out 5G to more than 16 million people in Germany across some 12,000 antennas across the country, for which it "concluded new contracts with both companies" Ericsson and Huawei.