Ronald Reagan’s appointees wiped out government-imposed balance requirements for broadcasters when they repealed the Fairness Doctrine. Trump leaves behind a GOP that wants to punish bias on social media. 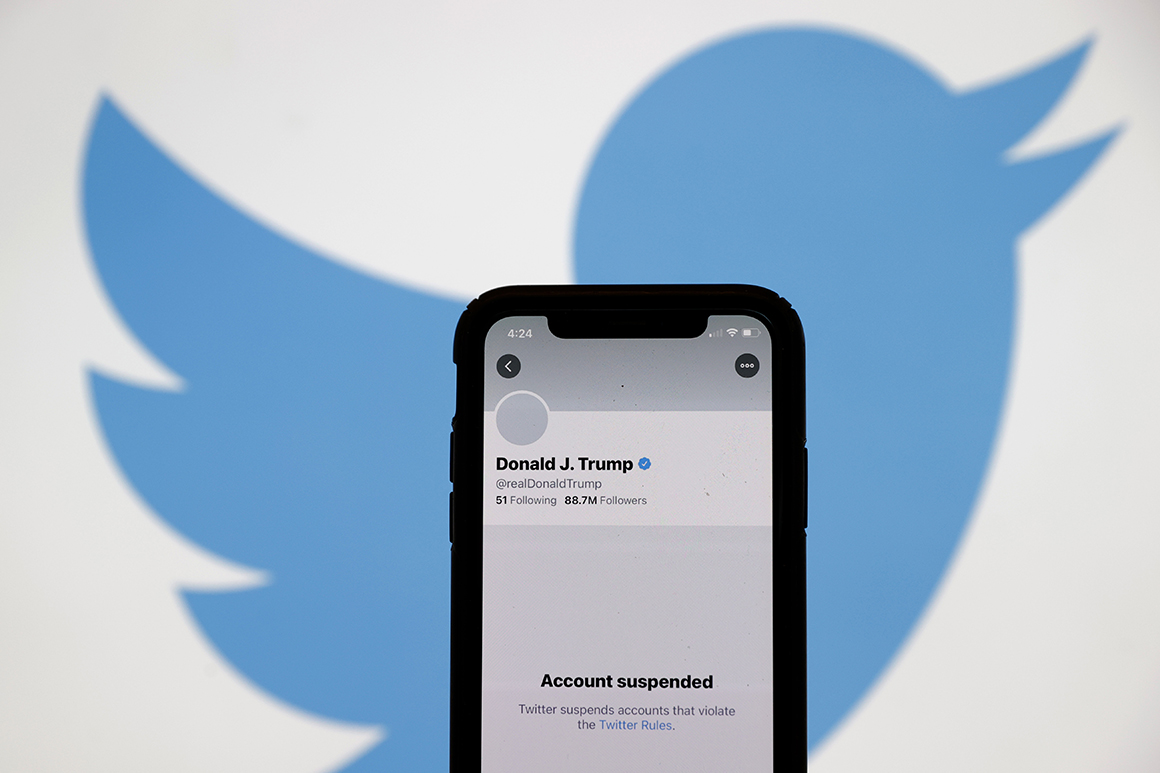 Republican wrath at the tech companies that muzzled President Donald Trump and his followers is hastening a big change in GOP ideology — rising support for government intervention in the marketplace of ideas.

A generation after Ronald Reagan’s regulators killed the Fairness Doctrine, freeing broadcasters from the mandate to treat opposing views fairly, the Trump-era Republican Party is fired up over what it sees as anti-conservative bias in companies like Facebook and Twitter. And a growing number of leading GOP figures are calling for the government to respond, by creating legal consequences for online platforms that unfairly silence their users.

Trump himself failed to get these changes enacted, but the shift appears likely to outlast his presidency in a party that’s embracing anti-Silicon Valley fervor as a major campaign theme.

That dismays Republicans who cheered Reagan’s move — and say the current GOP proposals look a lot like a Fairness Doctrine for the internet.

“I am a big Trump supporter, but I totally disagree with the approach here,” said Mark Fowler, a Reagan appointee who led the charge for rolling back the doctrine as chair of the Federal Communications Commission. “I think it’s a blunderbuss, kind of a Panzer, heavy-handed approach to trying to control the press.”

Then-FCC Republican Mike O’Rielly expressed similar misgivings last summer after the president proposed a wide-ranging regulatory and legislative crackdown against bias in social media. “I shudder to think of a day in which the Fairness Doctrine could be reincarnated for the internet, especially at the ironic behest of so-called free speech ‘defenders,’” O’Rielly said in a speech in July. (Days later, Trump rescinded his nomination for a new term on the commission, forcing him to leave in December.)

Retired Rep. Greg Walden (R-Ore.), a former chair of the House Energy and Commerce Committee, told POLITICO last month that he too wants to keep government agencies away from social media speech. That puts him at odds with both Trump and Washington state Rep. Cathy McMorris Rodgers, who's now the top Republican on the panel.

"Go back to the Fairness Doctrine — how did that work out?" Walden said. "It was a disaster for free speech and, actually, stifled speech on broadcast airwaves. And it wasn't until it was repealed, that like it or not, we saw more vigorous speech on the public’s airwaves."

Supporters of Trump’s efforts reject any comparison between their proposals and the doctrine that Reagan’s FCC vanquished. But the shift toward favoring government action against ideological bias by private companies is a notable trend among several of the most outspoken GOP voices in Congress, including potential presidential contenders like Sens. Josh Hawley (R-Mo.), Tom Cotton (R-Ark.) and Ted Cruz (R-Texas).

The main focus of the Republicans’ efforts has been to pare back or repeal Section 230 of the Communications Decency Act, a 1996 law that gives online companies broad legal immunity for how they police their users’ content. Those calls escalated last week, after Twitter shuttered Trump’s account following the deadly Jan. 6 rampage in the Capitol.

The Fairness Doctrine, a set of FCC regulations dating to 1949, stemmed from concerns that echo today’s debates about Silicon Valley’s stranglehold on the public discourse.

In the mid-20th century, a handful of powerful broadcasters controlled much of that discourse, inspiring fears that they could use their slices of the scarce, publicly owned airwaves to bombard Americans with one-sided content. To counter that, the FCC policies required radio and television stations to treat controversial subjects in a balanced and equitable way, which broadcasters said infringed on their ability to cover the news.

Critics of the big tech companies say titans like Facebook, Twitter and Google pose a similar danger. Those companies don't have government-issued broadcasting licenses, but critics say they enjoy undeserved federal protections thanks to Section 230.

"In a country that has long cherished the freedom of expression, we cannot allow a limited number of online platforms to hand pick the speech that Americans may access and convey on the internet," Trump said in a May executive order that called on several agencies and Congress to crack down on biased social media companies. He added, "Twitter, Facebook, Instagram, and YouTube wield immense, if not unprecedented, power to shape the interpretation of public events; to censor, delete, or disappear information; and to control what people see or do not see."

At a post-election hearing on alleged censorship by big tech companies, Cruz asked congressional Democrats: "Do you really want to submit total control of the public debate to a handful of Silicon Valley billionaires, modern day oligarchs? With money and power and no accountability?"

Back in the 1980s, Fowler recalled, even many Reagan supporters needed convincing about leaving decisions about fairness and balance up to the free market.

A host of top conservatives advocates, from Phyllis Schlafly to Pat Buchanan to Reagan’s White House advisers, feared that wiping out the Fairness Doctrine could unleash radio and television stations to criticize the president. But Fowler, who viewed the issue as one of First Amendment freedoms, persuaded Reagan that repealing it would unleash a broader array of voices.

Fowler’s views won the day, the rollback was completed in 1987, and stations’ freedom to air ideologically pointed programming led to the rise of conservative broadcasting stars like Rush Limbaugh — who has repeatedly warned against any hint that Democrats were plotting to revive the doctrine or extend it to the internet. (“When the Fairness Doctrine existed, there wasn’t any controversial programming at all,” Limbaugh said on his show in 2007.)

Over the decades, Reagan’s approach to broadcasting became the GOP orthodoxy. But Republicans’ views on social media have shifted in recent years, in response to conservative accusations that platforms like Facebook, Twitter and Google-owned YouTube systematically censor, block and filter right-leaning messages while letting liberals run free. (The companies deny the accusations, and Democrats including President-elect Joe Biden blasted the same platforms for giving Trump a megaphone to broadcast false and threatening messages.)

The result has been a series of bills that would make it easier for consumers to sue the companies — either by repealing Section 230 entirely, as Trump has demanded, or by limiting the companies’ ability to qualify for legal immunity.

Repealing the law could subject every company with an online presence to lawsuits for just about anything their users post, making it difficult for Facebook and Twitter to stay in the social media business at all. (“Twitter may be a private company, but without the government’s gift of Section 230 they would not exist for long,” Trump said in a Jan. 8 tweetstorm that the company immediately pulled down.)

Other legislative proposals would condition the legal protections on the companies’ ability to show good behavior, including — in some cases — ideological even-handedness.

One bill by Hawley, the Ending Support for Internet Censorship Act would deny the protections to companies that can’t prove to federal regulators that their content decisions are “politically neutral.” Trump similarly asked the FCC to weigh in on stripping the immunity from companies that don’t make such decisions in “good faith.”

‘What the Republican base is demanding’

Trump’s ideas about reining in social media won't be departing D.C. anytime soon, especially amid conservative anger over Silicon Valley’s shuttering of his online accounts and the GOP-friendly platform Parler.

Rep. Jim Banks (R-Ind.), the new chair of the Republican Study Committee, has said he plans to make the debate around overhauling the liability shield the “key centerpiece of our work” in the new Congress. He suggests that one GOP-backed bill to narrow the protections — the Stop the Censorship Act — would be a good start.

Banks said he sees a party that has never been more unified on these issues.

He said he’s also watching the courts, noting a recent set of written comments in which Justice Clarence Thomas urged the Supreme Court to look for an opportunity to weigh in on Section 230. Thomas noted that “many courts have construed the law broadly to confer sweeping immunity on some of the largest companies in the world.”


That trend shows no signs of fading even as the president leaves office.

“I definitely think this is going to persist beyond Trump,” said Rachel Bovard, a senior director of policy at the Conservative Partnership Institute whom the White House had considered last year when looking to fill a slot in the FCC. “These companies in particular have crossed the Rubicon on so many different issues.”

But the GOP bias complaints face a hard sell with congressional Democrats, who have their own changes in mind for Section 230 and say their main concerns about social media involve hate speech and misinformation — ills demanding more moderation, not less. Democrats derided Trump's attempted crackdown, saying the president was just lashing out at companies that fact-checked him during his reelection campaign.

Banks acknowledged that Republicans’ thinking on the issue has evolved. But he said the current GOP efforts don’t aim to impose any regulations — instead, they’d be removing a special liability carve-out that only online companies enjoy.

“We’ve all come full circle on this subject, moving from seeing this as a free market issue to seeing this more as a deregulatory effort to take away the sweetheart deal that Section 230 gives to Big Tech,” the GOP lawmaker said. “What was a fringe issue four years ago is now, I believe, a widely accepted part of the Republican Party platform at the moment in support of Section 230 reforms.”

That would be a mistake, said Fowler, the former FCC chair, even though he’s no fan of the way that social media titans like Facebook CEO Mark Zuckerberg wield their power.

“We may not like it as Republicans — I don’t,” said Fowler, who’s now retired and living in Florida. “But I like more the idea of free markets, with free marketplaces of ideas. And that really is the higher value. That is really what Republicans are missing in all this.”