The collapse of negotiations marks a new low for a polarized Washington. 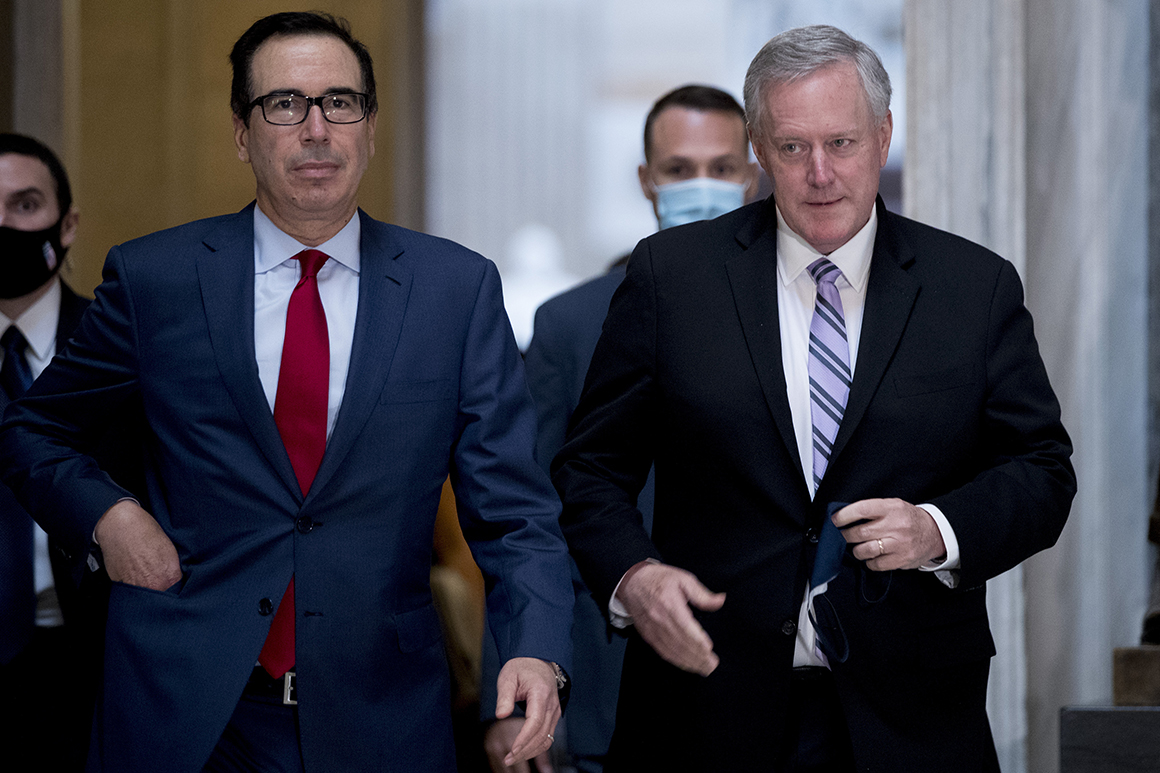 What a difference five months make in the middle of a pandemic.

In March, as the coronavirus was beginning to hammer the United States, President Donald Trump and congressional leaders from both parties were able to quickly pass a $2.2 trillion relief package providing a financial lifeline to millions of workers and tens of thousands of small businesses facing an apocalyptic economic slowdown.

There were some bitter partisan disputes inside the Senate as the bill was crafted, and Treasury Secretary Steven Mnuchin wore out a path trodding between the offices of Senate Majority Leader Mitch McConnell (R-Ky.) and Minority Leader Chuck Schumer (D-N.Y.) as they put together the final deal. In the end, though, one of the most expensive pieces of legislation in history sailed through Congress without a single “no” vote.

Fast forward to August. More than 160,000 Americans are dead, unemployment has soared to levels not seen since the Great Depression while federal payments to laid-off workers have expired, millions more face possible eviction, and coronavirus cases continue to spike nationwide. Meanwhile, Congress and the White House are mired in their ancient, all-consuming gridlock.

Two weeks of closed-door talks — with Speaker Nancy Pelosi (D-Calif.) and Schumer facing off against White House chief of staff Mark Meadows and Mnuchin — failed to lead to a breakthrough on a new coronavirus relief package. The two sides remained hundreds of billions of dollars apart on overall spending for the new package, and even more importantly, were separated by a huge ideological chasm over what role the government should play at this point in the calamity.

"It would be nice to do [a deal] with Democrats, but they're just interested in one thing — and that's protecting people who have not done a good job in managing cities and states," Trump said on Friday night during a press conference at his golf club in Bedminster, N.J.

Amid the deadlock, Trump said he would issue a series of executive orders in the coming days to address the economic fallout from the pandemic. The orders are likely to divert tens of billions of dollars in congressionally approved funds to reinstitute federal unemployment payments, reimpose an eviction moratorium, continue the suspension of student loan payments and defer federal payroll tax payments. The unilateral moves could easily draw challenges in court.

READ:  Whitmer reveals conversations she had with Biden about joining his team

Pelosi and Schumer expressed dismay at Trump’s expected executive orders, which had been telegraphed by Meadows all week.


But the massive failure by the nation’s leaders to find a consensus only months after a major bipartisan success comes down to a number of factors, both personal and political.

The elections are only 88 days away, and both sides are gambling that they've got more to gain from a stalemate than a deal. Personality clashes also infused the talks, with the presence of the conservative Meadows having a huge impact on the outcome. Many Republicans in both chambers didn’t want any deal in the first place, citing the growing national debt and arguing unspent money from March’s CARES Act should be pushed out before additional funds were approved. And then there was the growing emotional and psychological fatigue with the crisis itself, spurred on by a president who wants to see the country reopen as fast as possible to help his own political prospects.

Meadows, in particular, was singled out by Democrats as a major roadblock to any deal. Democrats point out that they were able to reach earlier agreements with the White House when Mnuchin was the point man and say Meadows’ presence in the talks has proven an unwelcome addition.

“[Meadows’] positions are quite hardened and non-compromising, more so than Mnuchin,” Schumer said of the co-founder of the hard-line Freedom Caucus. Democrats assert privately that Meadows was brought in “to blow up a deal,” while Mnuchin is there “to get something done.”

Meadows, however, wasn’t having any of it. The former North Carolina lawmaker — who became Trump’s fourth chief of staff in late March — said he and Mnuchin offered “many concessions” during the seemingly interminable round of face-to-face discussions, only to run into unreasonable Democratic resistance.

“I think it's interesting just to hear the comments from Sen. Schumer and Speaker Pelosi saying that they want a deal, when behind closed doors their actions do not indicate the same thing,” he countered.

Pelosi, meanwhile, lashed out at McConnell for only beginning negotiations in July. Pelosi noted that the House passed the $3 trillion HEROES Act in May. McConnell, though, scoffed at that legislation as nothing more than a Democratic wish list, and he repeatedly said the Senate would come up with its own plan.

“Mitch McConnell said pause, he pushed the pause button,” Pelosi said. “If we had acted in a closer time then so many lives and livelihoods would have been saved.”

In an interview with POLITICO this week, McConnell defended his decision to wait, arguing that a significant amount of the money from CARES had yet to be spent.

“It’s a lot harder now than it was four months ago,” McConnell said. “We’re that much closer to the election.”


At the end, though, the biggest problem was the price tag of a new deal.

Republican lawmakers and the White House wanted to keep the cost of what was likely to be the year’s last round of coronavirus relief legislation to $1 trillion. Pelosi and Schumer pushed a Democratic alternative that would cost well over $3 trillion, although they told reporters on Friday that the pair offered to cut a trillion dollars off that total in order to reach a deal. Schumer said he was dismayed when Mnuchin and Meadows didn’t leap at his proposal.

“And you should have seen their faces,” Schumer exclaimed.

With the election three months away, the political stakes of the impasse are high and it’s not yet clear which party will suffer most from the botched negotiations.

Trump is sinking in the polls and the GOP-controlled Senate is in play. Unlike when he was pushing the March CARES Act, McConnell now leads a deeply divided caucus, including incumbents facing reelection who want something to campaign on and fiscal hawks who want to see federal spending drastically cut back. If the economic misery increases, the party in power is likeliest to be blamed.

But Democrats are taking a risk too in rejecting any type of short-term agreement and could face some heat for the lapsed unemployment benefits in particular if they come to be seen as the roadblock.

The federal payments that expired at the end of July were $600 per week. The most recent White House offer was $400-per-week for five months, or state agencies would be allowed to determine a payment of up to 70 percent of a worker’s lost income with a $600 weekly cap. Pelosi and Schumer rejected the offer, saying they wanted $600-per-week into 2021.

Democrats are also seeking $915 billion in financial aid for state and local governments over two years, a staggering amount of money that the White House and Senate Republicans said was unreasonable. Republicans offered $150 billion for one year. That huge gap was a major area of disagreement.

There were other important policy disputes — election security funding, money to reopen schools, and aid to renters and homeowners, among others.

“I said come back when you're ready to give a higher number,” Pelosi said.

Perhaps lost in the whole partisan dispute, however, was a sense of the scale of government aid being talked about here. The late Sen. Everett Dirksen (R-Ill.) was famous for his line, “A billion here, a billion there, pretty soon, you’re talking real money.” That’s a mere pittance in the current crisis.

“We come down a trillion from our top number which was $3.4 [trillion.] They go up a trillion, from their top number which was $1 [trillion], and that way, we could begin to meet in the middle, Schumer said after the negotiations had collapsed. “Unfortunately, they rejected it. They said they couldn't go much above their existing $1 trillion, and that was disappointing.”