“You see a huge leap in progress. It can only be attributable to what happened over the course of the summer of 2020.” 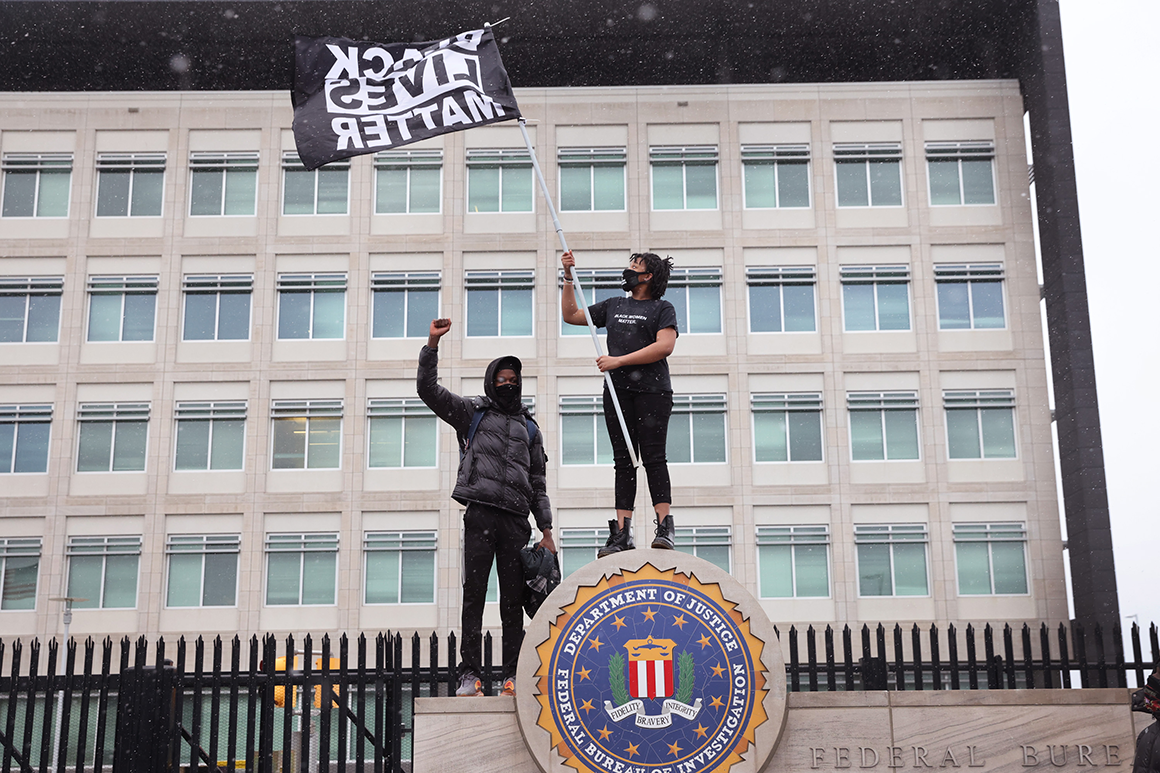 Before becoming America’s 86th attorney general two months ago, Merrick Garland was known primarily for two things: being denied a seat on the Supreme Court, and writing an influential 1985 law review article on the regulation of seat belts.

Few expected the 68-year-old federal judge, widely respected for his fairness and modest rulings during his nearly quarter-century on the D.C. Circuit, to lead the federal government’s mission to usher in an era of greater police accountability.

During Garland’s confirmation process, President Joe Biden’s messaging mavens had to reach all the way back to the 1995 Oklahoma City bombing to find a compelling narrative arc connecting the man tapped to lead the Justice Department to the country’s present challenge in combating white supremacism and racism. Garland, then a young prosecutor, helped lead the DOJ’s probe into the act of right-wing inspired domestic terrorism that killed 168 people. 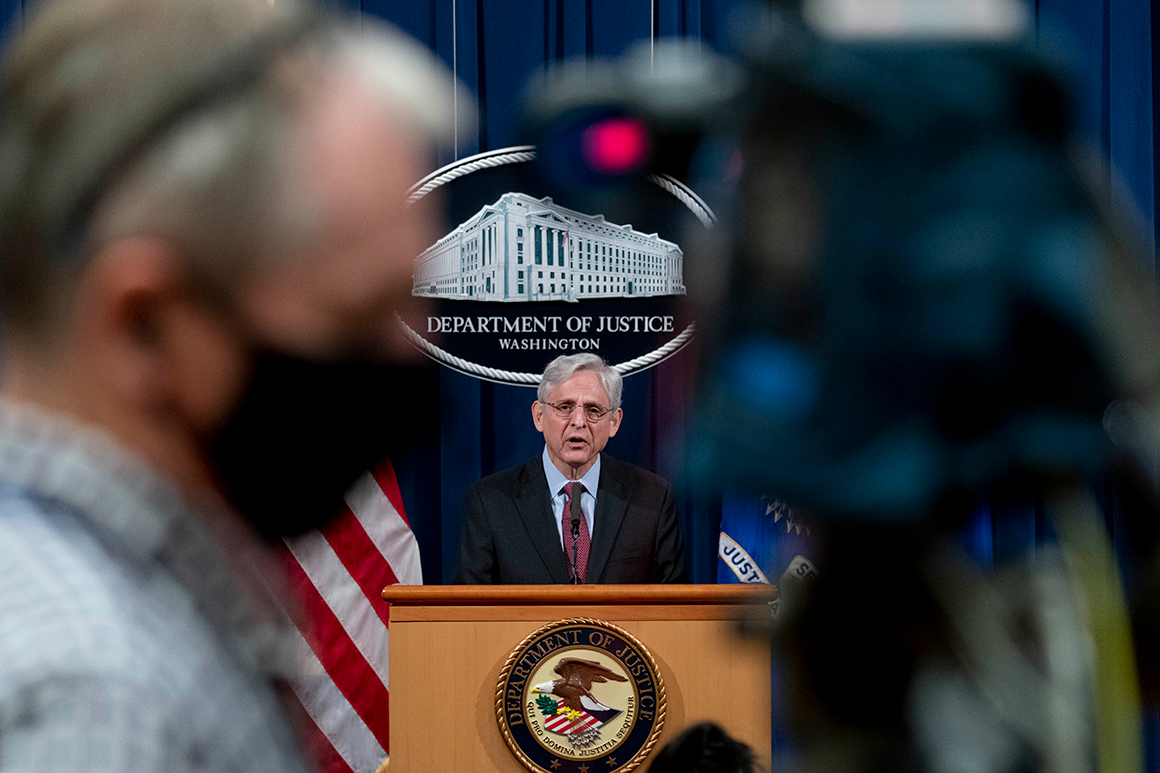 As a jurist, Garland built a reputation for hearing often obscure cases on energy regulation, the idiosyncrasies of federal administrative procedure and interpretations of the Freedom of Information Act. He’s now overseeing the vexing task of providing federal oversight of law enforcement agencies with troubled policing practices at a time when many Americans feel an urgent need for dramatic change.

The immediacy of the task was on display less than 24 hours after a former police officer in Minnesota was convicted in the murder of George Floyd.

“I know that nothing can fill the void that loved ones of George Floyd have felt since his death,” Garland said on the morning of April 21 announcing the launch of a pattern-or-practice probe into potential civil rights abuses carried out by the Minneapolis Police Department.

A few days later, on April 26, DOJ launched a similar inquiry, this time looking into the conduct of the Louisville Metro Police Department, whose officers were involved in the shooting of Breonna Taylor, a Black 26-year-old emergency technician killed by officers in her apartment during a botched narcotics search last March.


In effect, the Biden administration was revoking a moratorium put in place by the Donald Trump-era DOJ that all but eliminated the use of consent decrees, a court-binding agreement that lays out an action plan to implement specific reforms. It’s the department’s main tool to help root out racist or unlawful practices within law enforcement agencies, and Trump’s attorneys general had throttled back the practice, arguing they were bad for officer morale and led to spikes in crime.

But Garland wasn’t done. Two days after that, on April 28, the DOJ made an additional announcement.

This time, rather than targeting a police department, it levied criminal charges against three white men awaiting trial in Georgia, slapping them with federal hate crimes and civil rights violations in connection to the February 2020 murder of Ahmaud Arbery.

Then, the following week, on May 7, justice officials announced a federal grand jury handed down criminal indictments against four Minneapolis police officers including Derek Chauvin, the officer who was found guilty in state court of unintentional murder, third-degree murder and second-degree manslaughter in Floyd’s killing.

Taken in its totality, the tempo of Garland’s actions is eye-popping, even for those who expected the DOJ to return to its pre-Trump assertiveness on policing issues. Even more striking, the moves came with Justice’s Civil Rights Division under interim leadership as the Senate has yet to take up a confirmation vote for Biden’s pick to lead the unit, Kristen Clarke. 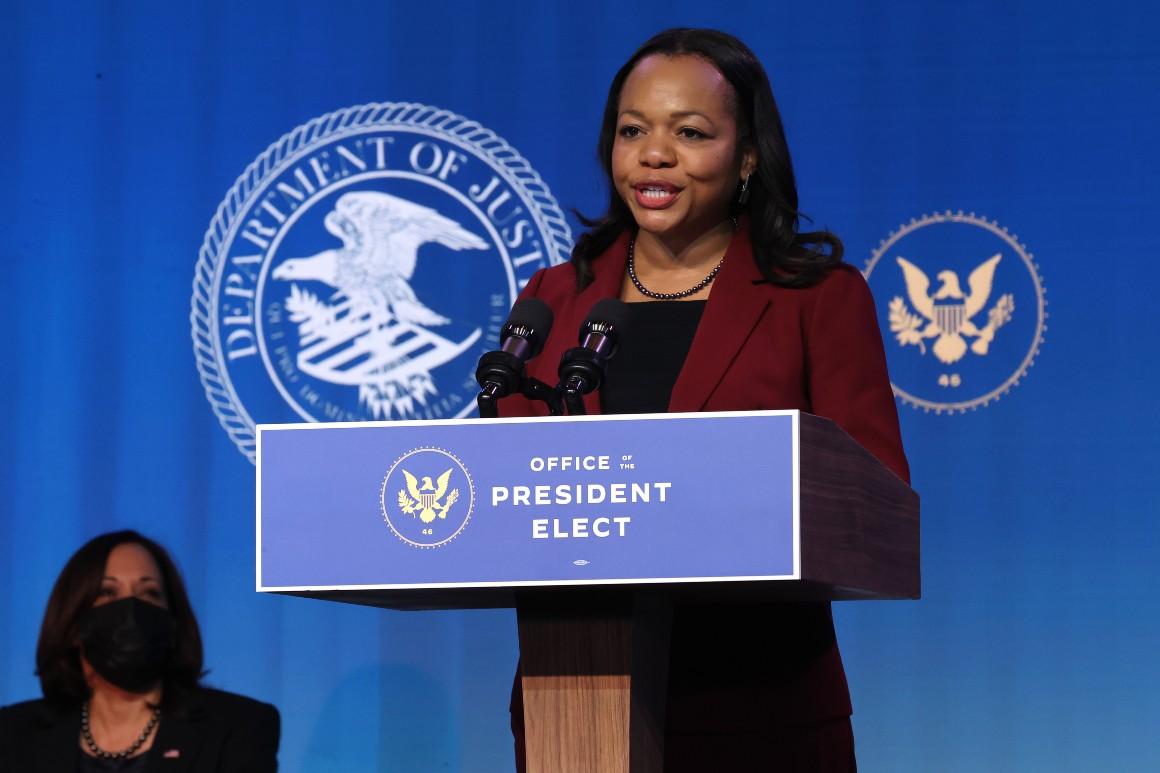 Back in 2009, policing in America was not the hot-button issue it is today. Obama’s first attorney general, Eric Holder, launched his first pattern-or-practice investigation in March of that year. It was a probe into Maricopa County (Ariz.) Sheriff’s office for reports of discriminating against Latinos and violating federal immigration laws. It would be several months before Holder would open one into New York’s Suffolk County Police Department for failing to investigate crimes committed against Latinos by whites and for dissuading Latinos from seeking help from law enforcement.

In Garland’s case, there’s some evidence DOJ was anticipating the reversal in policy — and had already laid the groundwork to move quickly in case the new attorney general was ready to start cracking down.

In background briefings with reporters in recent weeks, current Justice Department officials who requested they not be named said that career attorneys in the Special Litigation Section had been collecting data and materials to recommend to top brass to launch a probe in Minneapolis.

The officials declined to elaborate on how long staff attorneys had been looking into the matter, when the recommendation was made or whether Trump administration officials had rebuffed earlier requests.

But several former Justice Department officials interviewed for this story observed that the speed at which the DOJ was announcing the probes and charges likely meant the preliminary work had started under the previous administration.

Some suggested these cases were teed up by career attorneys to have them ready for when Biden administration appointees arrived — Garland in March, and Vanita Gupta, the former head of the Civil Rights Division during the Obama administration, as associate attorney general shortly thereafter.

“It could be that they had been looking into [these cases] since last year, but only got an administration that's going to proceed, recently,” said Ed Caspar, senior counsel for the nonpartisan Counsel for Lawyers Committee for Civil Rights Under the Law. He worked in the Civil Rights Division under Presidents George W. Bush and Barack Obama.


It is possible too, Caspar added, that the Trump appointees at the department could have deferred the final decision on these recent cases to the incoming Biden appointees. In either scenario — career attorneys waiting for a regime change at the department or outgoing appointees allowing Biden officials final say — the decision landed neatly in Garland’s lap.

“So when April comes around ... Merrick Garland is approved, then it's like, well, a raft of cases that are ready to go. And now that you're in place, can we have your stamp of approval?” Caspar said, describing a possible scenario of how the approvals were handled. “He is in a position to say ‘yes.’ And so you have stamp, stamp, stamp. All of a sudden you have this whole raft of cases approved all at once.”

The Justice Department did not respond to repeated requests for official comment.

DOJ officials who did speak to POLITICO requested they not be named because they were not authorized to go on the record. They stressed that prior to Floyd’s killing, teams in Minneapolis were already conducting outreach to the community groups for help with their investigation. Those contacts expanded after his killing was captured on cellphone video and went viral last year, the officials said.


“What could happen is that an incident like the murder of George Floyd would trigger investigators, attorneys to look more carefully and deeply at the Minneapolis [Police] Department and look at what other incidents have there been in the recent past,” said Puneet Cheema, a former attorney in the Civil Rights Division.

Cheema, who served during Obama’s second term and the early part of Trump’s administration, investigated the Baltimore Police Department. She played a lead role in helping negotiate the city’s consent decree with the Justice Department and now leads the Justice in Public Safety Project at the NAACP Legal Defense Fund.

“So a singular incident can garner attention and cause investigators and attorneys to dig more deeply and look more carefully at the department to see if there is broader evidence that warrants a pattern or practice investigation,” Cheema said.

This all points to career attorneys collecting evidence to launch a fuller probe into Minneapolis police practices beginning last year, raising questions as to why a pattern-or-practice investigation wasn’t announced earlier.

Officials have said the department wanted to allow Minnesota’s criminal trial of Chauvin to play out before moving forward with the federal probe. 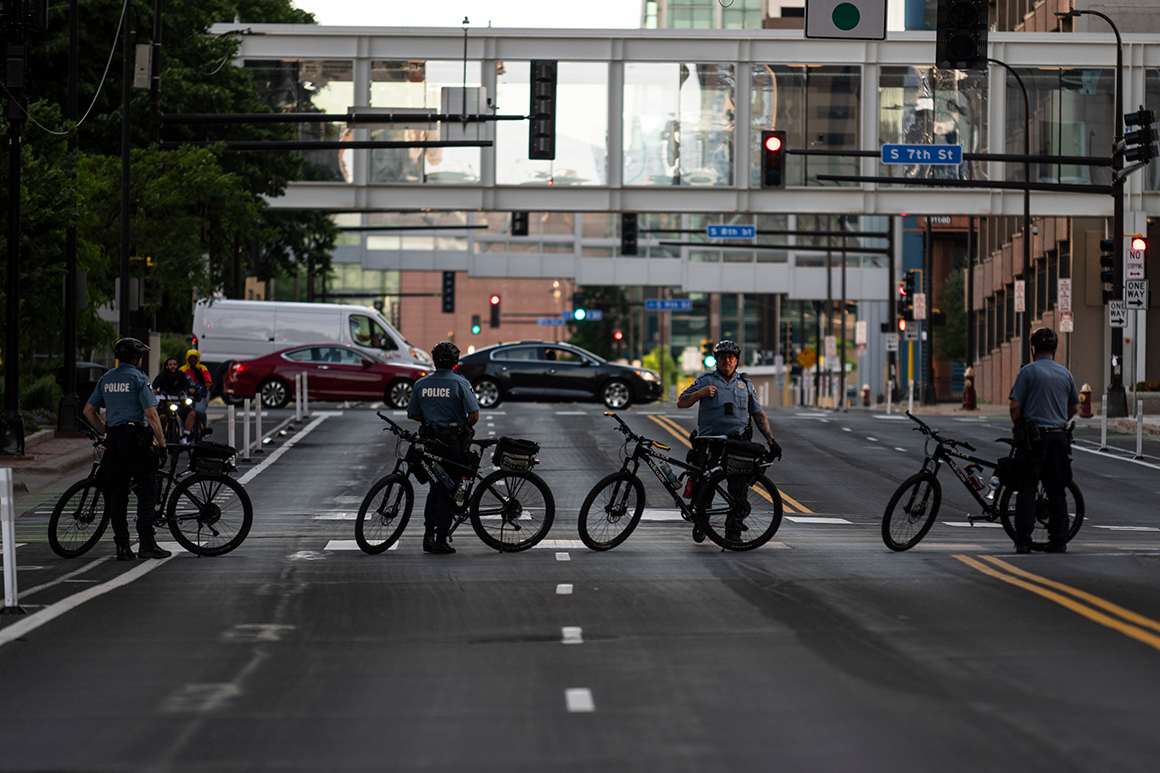 But the trial of three other ex-Minneapolis police officers implicated in Floyd’s death — Thomas Lane, J. Alexander Kueng and Tou Thao — is set to begin in August. Officials didn’t elaborate on why the DOJ waited to announce a probe after the conclusion of the Chauvin trial, but did not do the same for the other officers.

While some applaud the Justice Department for taking the steps to examine incidents in Minneapolis, as well as in Louisville and in Brunswick, Ga., there are others who should get credit too.

READ:  Opinion | How the VP Choice Could be Biden’s Biggest Racial Gaffe Yet

“In 2019, I wrote an article ... about how five years after Ferguson, after all the Black Lives Matter protests, really nothing had changed,” said Hansford, who worked as a policy adviser to help enact policy reforms on local state and federal levels in Ferguson, Mo., following the 2014 killing of Michael Brown by a white police officer.

“Here we are three years later and you see a huge leap in progress and it can only be attributable to what happened over the course of the summer of 2020.”

During the Trump administration, pattern-or-practice investigations, considered to be the first step in a consent decree process, all but ceased. But even just four months into Biden’s term, it is clear that the Civil Rights Division will play a far more visible role over the next few years.

“I don’t chalk up the Trump administration not doing those types of cases as regularly as some sort of racism or some sort of blind support of police,” Trusty added. “I took it to be more the attorney general, whether it was [William] Barr or [Jeff] Sessions, having notions of federalism where they said we really shouldn’t have a one-size-fits-all kind of approach from Washington when it comes to policing the police.”

During the Trump administration, the Justice Department announced just a single pattern-or-practice investigation of a police department. It was one narrow in scope, looking at alleged misconduct within a single unit in the Springfield, Mass., police department. In comparison, about two dozen such pattern-or-practice probes were opened during the eight years of the Obama presidency.

Both Barr and Sessions argued that such probes stigmatized officers and entire departments, noting that by and large law enforcement officials do not engage in racial bias. And their boss, Trump, sought to turn his unequivocal support for police officers into a political weapon, often lacerating Democrats as hostile to “law and order.” 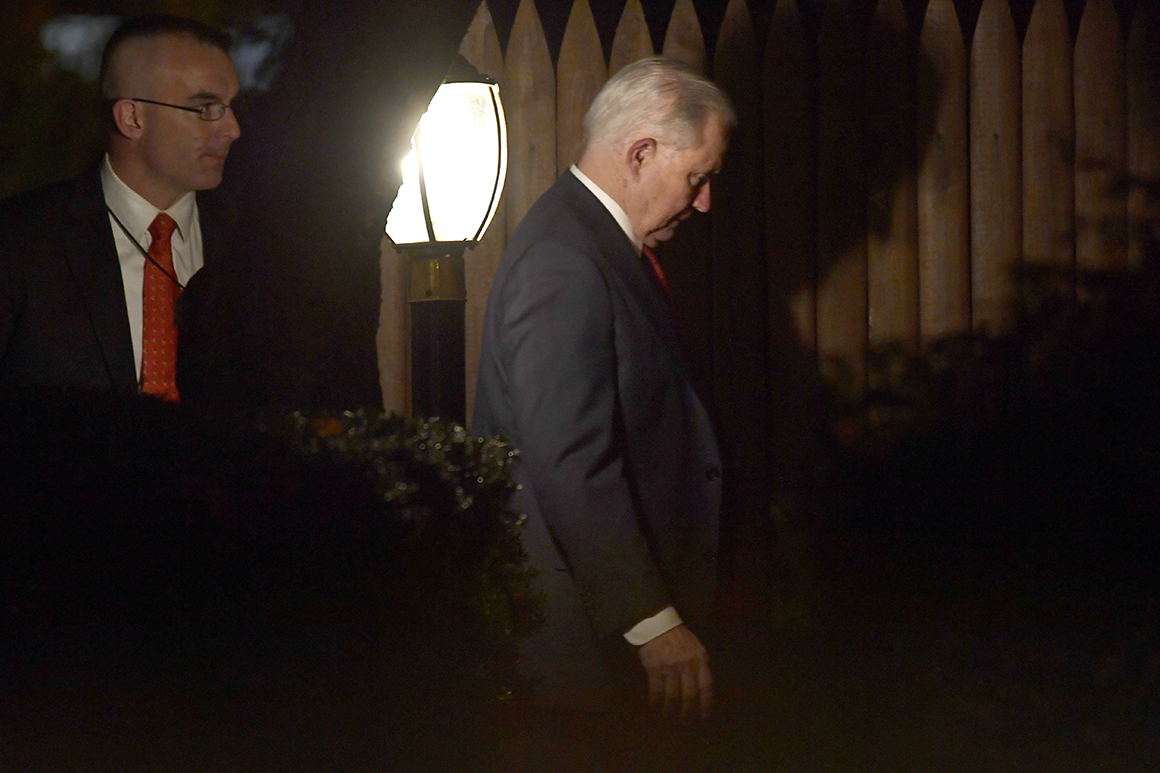 While the Trump Justice Department did pursue cases against individual police officers accused of abuse, critics say the lack of pattern-or-practice inquiries during the Trump era sent a message to law enforcement agencies that they didn’t need to worry much about federal oversight — despite the clear intent of Congress.

“It’s not like this is discretionary jurisdiction,” said Bill Lann Lee, a former assistant attorney general for the Civil Rights Division under President Bill Clinton. “It’s something the division was obligated to look into when facts warranted.”