Lawsuits could force this White House into an uneasy embrace of its predecessor. 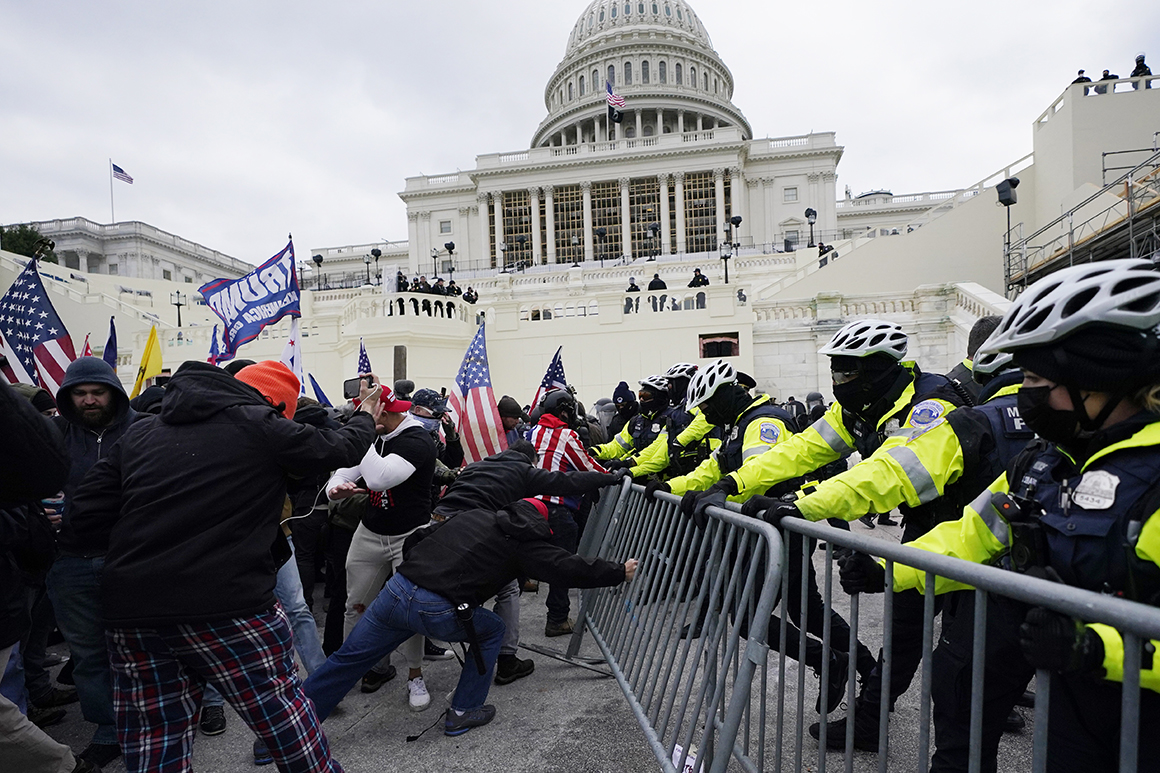 A new lawsuit against Donald Trump over his role in last month’s storming of the U.S. Capitol could raise thorny legal issues for Joe Biden, triggering battles over executive privilege that could push the new president toward an uncomfortable alliance with the man he ousted.

The suit filed Tuesday by Rep. Bennie Thompson (D-Miss.) against Trump, his former lawyer Rudy Giuliani and right-wing groups such as the Proud Boys and Oath Keepers, is just the first of what is expected to be a wave of civil litigation brought on behalf of individuals terrorized and injured during the takeover of Congress on Jan. 6.

While the political imperative for Biden will be to let Trump face the music for his actions and statements in the lead-up to the deadly attack, the legal imperative could be quite the opposite: Lawyers and other advisers seeking to preserve Biden’s presidential powers may be reluctant to allow litigants free rein to rummage through the Trump White House’s files and to force testimony from Trump’s top advisers, for fear the precedent established could haunt them later.

Attorneys for those pressing suits over the Jan. 6 attack are expected to demand details of Trump’s communications before and during the assault, as well as who was coming and going from the Oval Office that day.

If Trump’s lawyers, as expected, try to block discovery in the civil cases, the Biden White House and Justice Department will have to decide whether to defend Trump’s prerogatives or stand aside and risk weakening those same privileges for Biden and his successors.

“For potential plaintiffs, the problem will be getting their hands on documents and evidence proving what [Trump] knew and what didn't know and when,” said renowned civil attorney Roberta Kaplan. “Almost certainly, Trump's lawyers will claim that that's all subject to executive privilege and that issue will take time to litigate in court.”

In the end, the fight will likely be resolved by the courts, but the position taken by Biden and his Justice Department could have great weight.

“Even the question of whether Trump has the right to assert executive privilege is an unresolved one,” said Norm Eisen, a Brookings institution scholar who served as ethics czar in the Obama White House. “There will be issues of that kind that arise. Every administration has to deal with these issues.”

Former Obama White House counsel Neil Eggleston said he thinks the Biden White House will decide that it can choose not to resist demands for Trump’s communications without doing damage to Biden’s future claims for confidentiality.

“The argument would be this opens the door,” Eggleston said. “The insurrection does not open the door to just questioning a presidential decision. … I think they’ll decide the slope is not that slippery.”

Eggleston also noted that courts have also ruled that executive privilege isn’t absolute and that it should yield when government misconduct is plausibly alleged.

“There may be a significant amount of litigation about it, but it comes out, because it will be in connection with wrongdoing,” he said.


“You’re going to have to get into what his intent was to show liability,” said George Conway, a prominent Trump critic and conservative lawyer who pursued Arkansas state employee Paula Jones’ sexual harassment suit against President Bill Clinton.

“You know, he certainly supports the rights of individuals — members of Congress and otherwise — to take steps through the judicial process, but I don’t think we have a further comment on it than that,” Psaki said.

A White House official later said requests made in the litigation for Trump-era records would be directed to the National Archives.

“The White House fully supports efforts to investigate the events of Jan. 6,” said the Biden aide, who asked not to be named. “The records of the Trump White House are in the custody of the National Archives and Records Administration, which will handle any requests for such records consistent with the Presidential Records Act.”

Conway and other attorneys said they expect Trump to try to assert privilege not just for records and testimony of his aides, but also to claim that he is immune from suit because the events in question took place when he was in office.

Courts have ruled that a president has such protection within the “outer perimeter of his authority,” meaning that judges should seriously consider tossing out damage suits that threaten to intrude on a president’s official conduct.

“This will be a test of where the outer boundaries are where a president can get absolute immunity,” Conway added. “This will be interesting.”

While many would agree that Trump’s actions to overturn the election results and disrupt the Electoral College proceedings were political in nature, some of the former president’s activities on Jan. 6 are not so easily categorized. When he rebuffed calls from lawmakers to intervene or failed to call in the National Guard, was he acting in his political interest or his capacity as president and commander in chief?

READ:  Why Are Republican Governors Sending National Guard to the Border?

Even if a suit like the one filed Tuesday claims to target Trump in his “personal capacity,” entanglement of the legal process with his official duties seems inevitable.

When Trump spoke on the Ellipse that day, he spoke from a lectern bestowed with the presidential seal. In addition, Conway noted, White House counsel Pat Cipollone was reportedly deeply involved in Trump’s election-related deliberations.

“In my view, that’s not stuff the White House counsel should be involved in, even if he was giving the right advice,” Conway said.

Trump and his aides will also be able to throw another curveball at the Biden administration in connection with the current and expected suits, by asking the Justice Department to represent them or pay for private lawyers to do so.

Such a claim may sound outlandish, but last year, the Justice Department jumped into a civil suit Kaplan filed against Trump personally on behalf of writer E. Jean Carroll, who claimed Trump raped her in a New York City department store dressing room three decades ago then falsely accused her of making it up.


Trump’s lawyers initially battled the case, but last September, the Justice Department took over his defense and declared that Trump’s denial was an official act he took as president and effectively immune from suit. A judge rejected that stance. An appeal of that ruling is pending, with many lawyers watching closely to see whether the Biden Justice Department reverses course when a key brief is due in April.

A Justice Department spokesperson declined to comment on whether such a reversal is looming or on the prospect of Trump or his aides seeking aid in the just-filed litigation.

Even if Trump himself doesn’t seek Justice Department assistance, potential witnesses like former chief of staff Mark Meadows, Cipollone and other White House staffers could apply to DOJ for lawyers or financial assistance to pay for one.

One factor that could delay Biden’s need to make decisions about whether to back Trump over executive privilege is the slow — often glacial — pace of litigation. Discovery will likely to be on hold while a judge rules on motions to dismiss the suits. That could take months. Appeals can stretch to years, with presidential prerogatives typically respected during that period.

Case in point: A suit the House filed in August 2019 to enforce a subpoena to former Trump White House counsel Don McGahn is still pending after a trip to the Supreme Court and several hearings before the D.C. Circuit. More arguments there are set for next week.

Another wild card that could impact the legal wrangling over riot-related civil suits: House Speaker Nancy Pelosi’s announcement Monday that she plans to form a congressional commission to examine the events of Jan. 6.

The White House has pledged cooperation with the commission effort. Information Biden approves for release through that process could make its way into the litigation. That might assuage internal concerns about simply forking over confidential records because of a civil suit.


The private litigation and the commission could also get tangled up with the massive criminal investigation of the events of Jan. 6, which has already led to charges against more than 230 suspects.

With even figures like Senate Minority Leader Mitch McConnell (R-Ky.) saying Trump’s acts and statements deserve criminal scrutiny, Trump might be advised to take the Fifth Amendment to avoid testifying about those events to the commission or in lawsuits. Trump advisers and aides are also likely to get similar advice, lawyers said.

Eisen said he recognizes the institutional imperatives to resist prodding into the White House by the courts, but he would urge the Biden White House not to weigh in on Trump’s behalf in the riot-related litigation.

“The president’s actions were ultra vires — were so far beyond the pale — that he does not merit official deference,” Eisen said. “There are limits. … The institutional and other prerogatives will be considered, but I think the better course will be to tell him he’s on his own.”

“If I were the Justice Department, I would say: We’re not going to defend that case,” Conway said. “I think Biden people are going to want to wash their hands of it. … Politically, are they really going to defend Donald Trump?”

Of course, any decisions issues of immunity and privilege won’t be decided by courts entirely in the abstract. Some judges might see Trump’s conduct in connection with Jan. 6 as so aberrant and dangerous that they won’t give him the benefit of the doubt, as they would any other ex-president.

“Liability for the insurrection is the worst possible case from Trump’s perspective for these murky questions to be resolved,” said Eisen. “Trump has made a lot of law — almost all of it bad for him.”