The candidate, Marjorie Taylor Greene, finished first in last week’s primary for an open, safe GOP seat in Georgia but still faces an August runoff for the nomination. 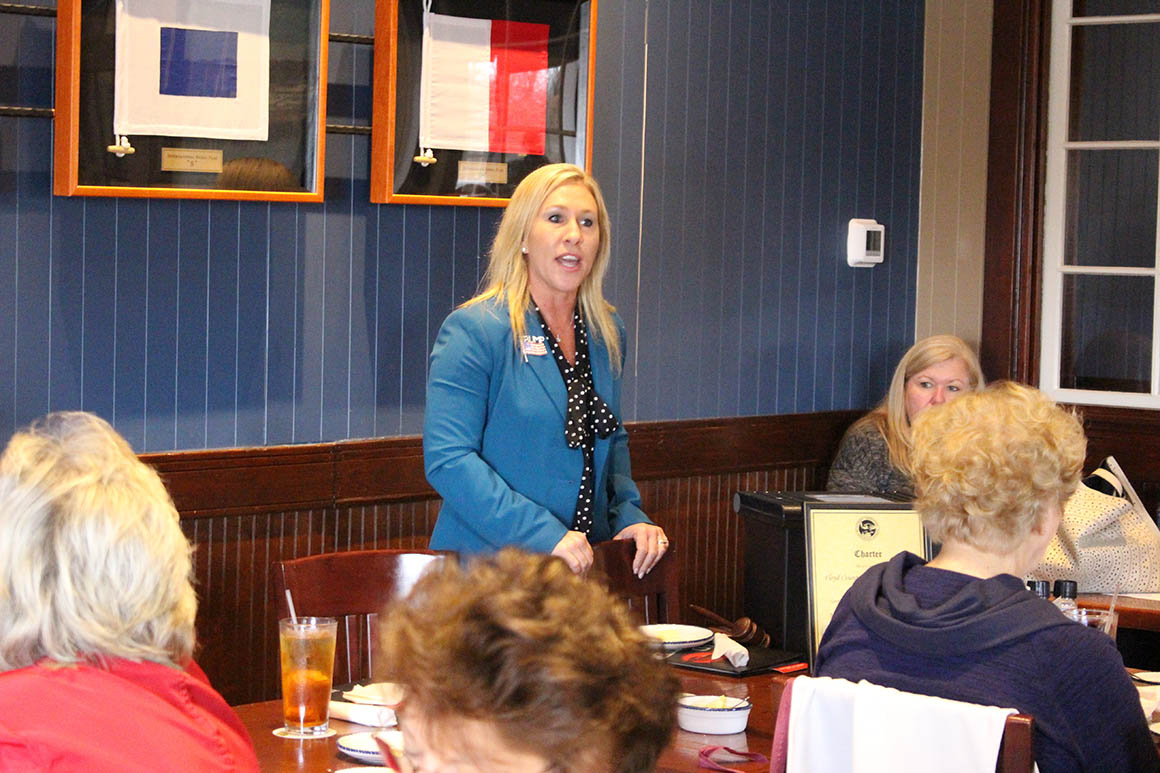 The House’s highest-ranking Republicans are racing to distance themselves from a leading GOP congressional candidate in Georgia after POLITICO uncovered hours of Facebook videos in which she expresses racist, Islamophobic and anti-Semitic views.

The candidate, Marjorie Taylor Greene, suggested that Muslims do not belong in government; thinks black people “are held slaves to the Democratic Party”; called George Soros, a Jewish Democratic megadonor, a Nazi; and said she would feel “proud” to see a Confederate monument if she were black because it symbolizes progress made since the Civil War.

Greene finished first in a primary for a deep-red, northwest Georgia seat last week by a nearly two-to-one margin over the second-place candidate. She is entering an August runoff as the heavy favorite to secure the Republican nomination for a district where that is tantamount to winning the general election in November. Her initial victory — which has sparked panic in GOP circles — comes as Republicans are grappling with a national reckoning over racial inequality and police brutality after George Floyd, an unarmed black man, was killed by a Minneapolis police officer last month.

Republicans had just felt relief after they finally ousted Rep. Steve King (R-Iowa), a controversial member with a long history of making racially charged remarks, in a primary earlier this month.

Now GOP lawmakers, aides and operatives fear Greene — a wealthy businesswoman who already drew national attention because of her belief in a trove of “QAnon” conspiracy theories — could create an even bigger black eye for the party if she wins the nomination. Greene will face neurosurgeon John Cowan in the Aug. 11 primary runoff.


“These comments are appalling, and Leader McCarthy has no tolerance for them,” said Drew Florio, a spokesman for House Minority Leader Kevin McCarthy (R-Calif.).

“The comments made by Ms. Greene are disgusting and don’t reflect the values of equality and decency that make our country great,” Scalise said in a statement. “I will be supporting Dr. Cowan.”

In recordings obtained by POLITICO, Greene described Islamic nations under Sharia law as places where men have sex with "little boys, little girls, multiple women" and "marry their sisters" and "their cousins." She suggested the 2018 midterms — which ushered in the most diverse class of House freshmen — was part of “an Islamic invasion of our government” and that “anyone that is a Muslim that believes in Sharia law does not belong in our government.”

In other videos, she directly compared Black Lives Matter activists to the Neo-Nazis and Ku Klux Klan members who marched at a white nationalist rally three years ago in Charlottesville, Va., denouncing them all as “idiots.” And Greene forcefully rejected the notion there are racial disparities in the U.S. or that skin color impacts the “quality” of one's life: “Guess what? Slavery is over,” she said. “Black people have equal rights.”

When asked for comment on quotes from the videos, Greene campaign manager Isaiah Wartman did not deny their veracity but declined to elaborate.

“Thank[s] for the reminder about Soros. We forgot to put him in our newest ad. We’re fixing that now,” he wrote in an email to POLITICO. “Would you like me to send you a copy?”

Sitting cross-legged on the floor and sporting an American flag baseball cap, Greene said in one video that unemployment — which affects people of color at disproportionately higher rates — is simply the product of “bad choices” and being “lazy.”

Minorities, Greene added, are being held back in society by gangs, drugs, a lack of education, Planned Parenthood and abortions — “not white people.”

“I know a ton of white people that are as lazy and sorry and probably worse than black people,” she said. “And that has everything to do with their bad choices and their personal responsibility. That is not a skin-color issue.”

Greene later implied that black women have it easier because of affirmative action, complaining they are more likely to get into a college than a white male if they have the same G.P.A.

“The most mistreated group of people in the United States today are white males,” Greene said as she wrapped up one of the videos.

The recordings, in which Greene spends hours ranting to her social media followers, were taped direct-to-camera. The date of the videos is not clear, but they appear to have been recorded between late 2017 and early 2019. She initially launched a campaign in June of last year for Rep. Lucy McBath’s (D-Ga.) seat in Atlanta's northern suburbs, but switched to the staunchly conservative 14th District when Rep. Tom Graves (R-Ga.) announced his plans to retire.

The top three House GOP leaders, as well as the head of the party’s campaign arm, denounced Greene’s rhetoric upon learning from POLITICO of her derogatory comments about blacks, Muslims and Jews.

While the National Republican Congressional Committee does not get involved in primaries, NRCC spokesman Chris Pack said Chairman Tom Emmer (R-Minn.) is “personally disgusted by this rhetoric and condemns it in the strongest possible terms.”

And a spokesman for GOP Conference Chairwoman Liz Cheney (R-Wyo.) — who forcefully rebuked King and called on him to step down — said, “obviously, Rep. Cheney opposes these offensive and bigoted comments.”


Despite Greene’s penchant for controversy — she has already faced public criticism for taking a photo with a white supremacist, floating a conspiracy theory that the Las Vegas shooting massacre was a plot to abolish the Second Amendment and calling one of the student activists from Parkland high school “little Hitler”— Greene has earned some congressional support.

She nabbed endorsements from Rep. Andy Biggs (R-Ariz.), the chairman of the conservative House Freedom Caucus; Rep. Jim Jordan (R-Ohio), one of President Donald Trump’s closest allies on Capitol Hill; Rep. Jody Hice (R-Ga.), a Freedom Caucus member and former pastor; and the House Freedom Fund, the political arm for the Freedom Caucus. Jordan and Hice both said they disagree with her statements but have not yet pulled their endorsements; Biggs did not respond to a request for comment for this story.

There is now a growing effort in the GOP to rally around Greene’s opponent. Reps. Buddy Carter (R-Ga.) and Drew Ferguson (R-Ga.) both backed Cowan on Wednesday morning, as did Rep. Austin Scott (R-Ga.). Ferguson called her comments “abhorrent” and said in a statement that she “shouldn’t have a place in Congress.”

Scott echoed a similar sentiment, saying “her statements would render her incapable of being an effective member of Congress.”

“This isn’t something that happened 10 years ago, when she said something out of context,” Scott said in an interview.

House Democrats have also pounced on Greene, even before the publication of the videos. Rep. Cheri Bustos (D-Ill.), the chair of the House Democratic campaign arm, called her a “next-generation Steve King” in a statement.

And Greene’s opponent, Cowan, is making a similar argument ahead of the runoff.

"These comments do not reflect the views of the people of the 14th District," he said in an interview. "I think she would embarrass our state, and I’m going to do everything I can to keep her from representing northwest Georgia in Congress."

In one of the videos, Greene offered a full-throated defense of Confederate statues, saying that if she were a black person she would be “proud” to see a Confederate monument "because I’d say, ‘Look how far I have come in this country.’”

Her comments are surfacing amid a heated national debate over whether Confederate statues should be removed and whether military bases named after Confederate leaders should be renamed — a debate that is also unfolding in Congress.

Greene blamed the country’s racial wounds on “identity politics” and President Barack Obama, whom she said only won black voters because of “the color of his skin.” She also suggested that’s why Obama identifies as black, even though he is “half-white” and “American,” Greene noted.

And during another offensive diatribe, Greene accused Democrats of “trying to keep the black people in a modern-day form of slavery” and said black Republicans get called “coon” and “Uncle Toms” by liberal black voters.

“It’s a slavery system to keep their vote,” she said.

In her videos, Greene is particularly preoccupied with the increase in Muslim members of Congress. She referred to freshman Rep. Ilhan Omar (D-Minn.) as "that woman out of Minnesota" who "has got to wear a head covering." She said members should not be able to take the oath of office on a Koran: "No! You have to be sworn in on the Bible."

READ:  These white women voted for Trump in 2016. They’re having second thoughts.

In 2018, Omar and freshman Rep. Rashida Tlaib (D-Mich.) became the first two Muslim women elected to Congress. They have become top targets of the right, along with freshman Reps. Alexandria Ocasio-Cortez (D-N.Y.) and Ayanna Pressley (D-Mass.), who are also women of color.

"There is an Islamic invasion into our government offices right now,” Greene said. “You saw after midterm elections what we saw so many Muslims elected. I don’t know the exact number but there were quite a few.”


She said that Muslims “are not being held back in any way” because the Constitution guarantees equality. “But what you people want,” she said, “is special treatment. You want to rise above us, and that’s what we’re against.”

And in another rant, she urged adherents of Sharia law to stay in their own countries and leave the U.S. alone.

"If you want Islam and Sharia law, you stay over there in the Middle East," she said. "You stay there, and you go to Mecca and do all your thing. And, you know what, you can have a whole bunch of wives, or goats, or sheep, or whatever you want. You stay over there. But in America, see, we’ve made it this great, great country. We don’t want it messed up."

She also spends several minutes attacking Imtiaz Ahmad Mohammad, a man who was running for the Florida state House, because he is Muslim and an immigrant.

"So let me tell you something. This man is not born in America. He’s from Pakistan. Ok?," she said, warning he was the only candidate who had filed for the seat, and that “his last name is Mohammad.”

She then attempted to recruit a challenger: "Anyone that lives in that district, you better sign your butt up and run against this guy,” she said. “Because we cannot let him win."

In a video and on social media, Greene has also touted an anti-Semitic conspiracy theory that Soros, a Holocaust survivor, collaborated with the Nazis.

“George Soros says dark forces have been awakened by Trump’s win. I don’t think so,” she said in one video. “George Soros is the piece of crap that turned in — he’s a Jew — he turned in his own people over to the Nazis.”

In February 2019, Greene replied to a tweet that included several memes accusing Soros of being part of a secret totalitarian world government. One picture showed Soros as a vampire who controls “every single Democrat politician.” In her reply, Greene called Soros “the Nazi himself trying to continue what was not finished.”

The Republican Jewish Coalition was one of the first GOP groups to denounce her publicly after the primary.