Democrats, immigration advocates accuse Biden, Harris of keeping the border closed to limit immigration, not protect the country against the pandemic. 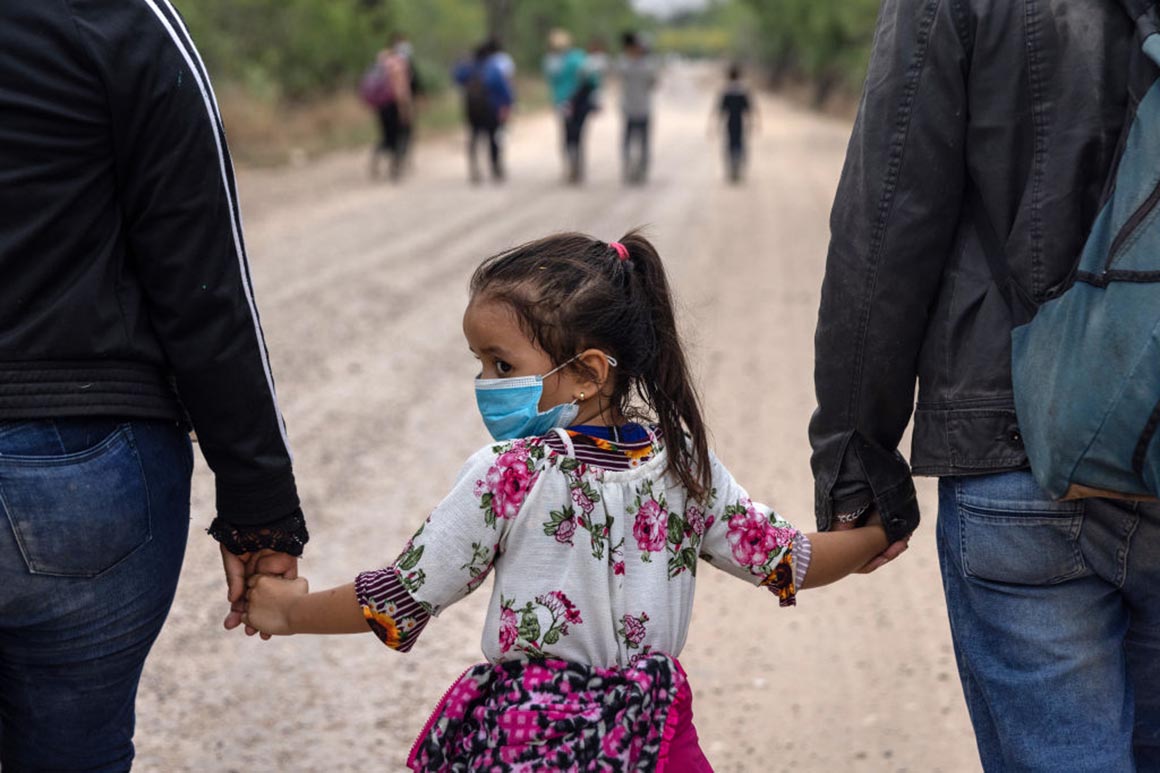 Months before the election, then-Senator Kamala Harris signed on to a letter with fellow Democrats accusing the Trump administration of violating federal law when it took the drastic step of citing the pandemic to close down the Mexican border.

Now, after being sworn in as vice president, Harris backs the Biden administration's decision to keep the border closed under that very same provision, according to two people familiar with her thinking.

The Biden administration has continued to use the Trump-era policy, often dubbed Title 42 in reference to the U.S. code, to effectively seal the border. It does so under the argument that migrants trying to cross could pose a health risk during the Covid outbreak.

More than 60 House Democrats are urging President Joe Biden to end the policy, saying it has no legal basis. Dozens of public health experts say it has “no scientific basis as a public health measure.” Immigration advocates have filed legal challenges as well.

But Biden hasn’t budged; and Harris remains one of several Democrats who was critical of former President Donald Trump but has stayed quiet as the administration faces accusations that it is using Title 42 to control immigration but not the pandemic.

“While the Biden administration inherited an extremely challenging situation after years of inhumane border policy, I believe that ending this misuse of Title 42 should be a priority,” said Rep. Frederica Wilson (D-Fla.), specifically citing the thousands of immigrants sent back to crisis-racked Haiti. “It is very hard for me to justify this inaction to my constituents as we await notification and an explanation from the administration.”

Harris’ silence on Title 42 illuminates the binds that she — and the Biden administration writ large — have faced upon taking office. Biden officials are trying to fulfill their campaign promises on immigration but have found that quickly reversing Trump’s policies can create an abundance of political headaches and contribute to a host of other problems, including trying to process and house a record number of unaccompanied children crossing the southern border.

That’s been especially true for Harris, who took more progressives positions than Biden during the presidential primary and has, since taking office, been handed a portfolio that includes tackling the root causes of migration from Central America. In her first three months, Harris has been intensely focused on earning the trust of Biden so much so that some allies worry she may be hurting her future political prospects. “The administration’s position is her position,” the official said. “Just given where we are with the pandemic, the administration — her, the president, administration-wide — are supportive of Title 42 being in place until HHS cancels the order.”

A White House official defended the position of Harris and the administration more broadly, saying that Trump had engaged in a pattern of action in which he overstepped his authority and that the pandemic itself has changed since last year.

“At the time, looking at it in 2020, what President Trump was doing, some of the arbitrary executive orders and rules that that administration was putting into place on a broad scale, many would think there was an overreach of power,” the official said. “You had Donald Trump implementing policies that would be outside his bounds. Now being in the administration, there is justification for it, sadly. But there is, being in the middle of a public health crisis.”

The Title 42 policy dates back to 1893 when the U.S. was looking to regulate shipping companies bringing in people with cholera. The little-known and sweeping public health statute that was re-codified in 1944 allows the federal government to override other laws and indefinitely close the border to “nonessential” travel in order to try to halt communicable diseases.

The Department of Health and Human Services renews Title 42 each month, according to the White House official. The CDC is supposed to conduct a monthly review on the policy each month as well, according to an October 2020 CDC order. After Biden came into office, he also called for a review. But it’s not clear whether those are happening. Under the law, tens of thousands of migrants are turned away each month. But the administration is making exceptions for unaccompanied children to stay for humanitarian reasons.

“Title 42 is still in place because we are still in the midst of fighting a global pandemic,” she said on April 21. “So I don’t have any predictions of when that will change.”

Last week, a senior administration official said there were no updates on how it would be applying Title 42. “The ultimate vision is to have a fair and orderly immigration system to be able to process people seeking asylum,” the official said. “But Title 42 is still in place other than the exceptions.”

During the campaign, Biden promised to quickly repeal Trump’s immigration policies, though he didn’t speak about Title 42 specifically. He has yet to act on many of the changes, complicating his goal of offering a kinder, gentler immigration system where everyone is welcome. In recent weeks, he reversed course after facing a firestorm for keeping the cap of refugees allowed in the country this year at Trump’s historic low of 15,000.

As Covid infections have dropped in America, Biden has been pushing the nation toward a partial reopening by July Fourth. He has pushed, cautiously, for schools to implement reopening plans and for businesses to begin rehiring. But he doesn’t talk about one aspect of getting the United States back to normal: rescinding the closure of the Mexican border.

“It’s really inexplicable that the Biden administration continues to use this Trump-era Title 42 policy to block and expel asylum seekers to life-threatening dangers in Mexico and the countries they have fled,” said Kennji Kizuka, associate director of research and analysis for Refugee Protection at Human Rights First. “There's no public health basis or justification for the policy. There wasn’t one when the Trump administration began expelling people and there isn’t one now.”

Trump first applied the contentious Title 42 policy in March 2020, directing federal officials to expel migrants who illegally crossed the northern and southern borders instead of detaining and processing them to prevent the spread of coronavirus in holding facilities. Critics argued that it was a gross distortion of the Public Health Service Act, located in Title 42 of the U.S. Code. They also argued that migrants could be tested and isolated when they enter the country to help stop the spread of Covid-19.

That April, 10 senators wrote a scathing letter spearheaded by Sen. Patrick Leahy (D-Vt.) to Chad Wolf, who was then the Department of Homeland Security’s acting secretary, arguing there was no known precedent or legal rationale for the administration’s action.

The letter included signatures of three senators who ran for president in the Democratic primary — Harris, Sen. Cory Booker of New Jersey and Sen. Amy Klobuchar of Minnesota. The offices of Leahy, Booker and Klobuchar didn’t respond to requests about whether the senators had communicated with the Biden administration about Title 42.

Since the start of the fiscal year, border agents have encountered 569,800 migrants at the southwestern border, according to Customs and Border Protection. Federal officials are turning away most of the migrants encountered at the border, including single adults and most families.

In March, the most recent statistics available, federal agents expelled 103,900 individuals under Title 42, 28 percent of whom were individuals who had been previously expelled from the United States under the same provision, according to the border agency. The numbers remained high in April, though there was a decline in the unaccompanied children. A total of 111,714 individuals were expelled under Title 42.

Trump officials argue that without the 45th president’s remaining policies in place, the border situation would be even worse.

“The only thing saving the Biden administration from an out-of-control border like you’ve never seen before is Title 42,” said Tom Homan, a former Trump immigration official. “They’re going to get flooded and can’t contain it. If they can’t handle what they got, how in the hell are they going to handle thousands of single adults coming across every day?”


Some migrant parents are sending their children to the United States alone, knowing that the Biden administration will allow them to stay, according to immigration advocates.

In addition, hundreds of other migrants who have been deported, mostly women and children, are stranded in a public square in Reynosa, Mexico near the U.S. border without drinking water and shelter, vulnerable to violence, according to Doctors Without Borders, which has been helping them since February.

At least 492 violent attacks against people stranded at the U.S.-Mexico border or expelled to Mexico — including kidnappings, rapes, robberies and assaults — have been reported since Biden took office, according to Human Rights First.

In November 2020, a federal court blocked Title 42 for unaccompanied children as part of a lawsuit filed by the American Civil Liberties Union and other groups arguing children should not be expelled. A week after Biden was sworn into office in January, an appeals court reversed that ruling. But the Biden administration said it would allow unaccompanied children to stay.

The Biden administration and ACLU have temporarily put on hold a lawsuit on behalf of families crossing the border to engage in negotiations, said Lee Gelernt, the ACLU’s lead lawyer in the case. So far, those talks have led 35 families per day to be allowed to enter the country under a humanitarian exemption, he said.

Gelernt said he will have no choice but to go back to court if the Biden administration does not provide an end date for Title 42.

“Too many families with small children are suffering and being sent back to danger without any asylum process whatsoever,” he said. “Additionally, barring families from entering is coercively forcing them to self-separate, by sending their children ahead on their own so at least they are safe. This is unacceptable in the United States.”