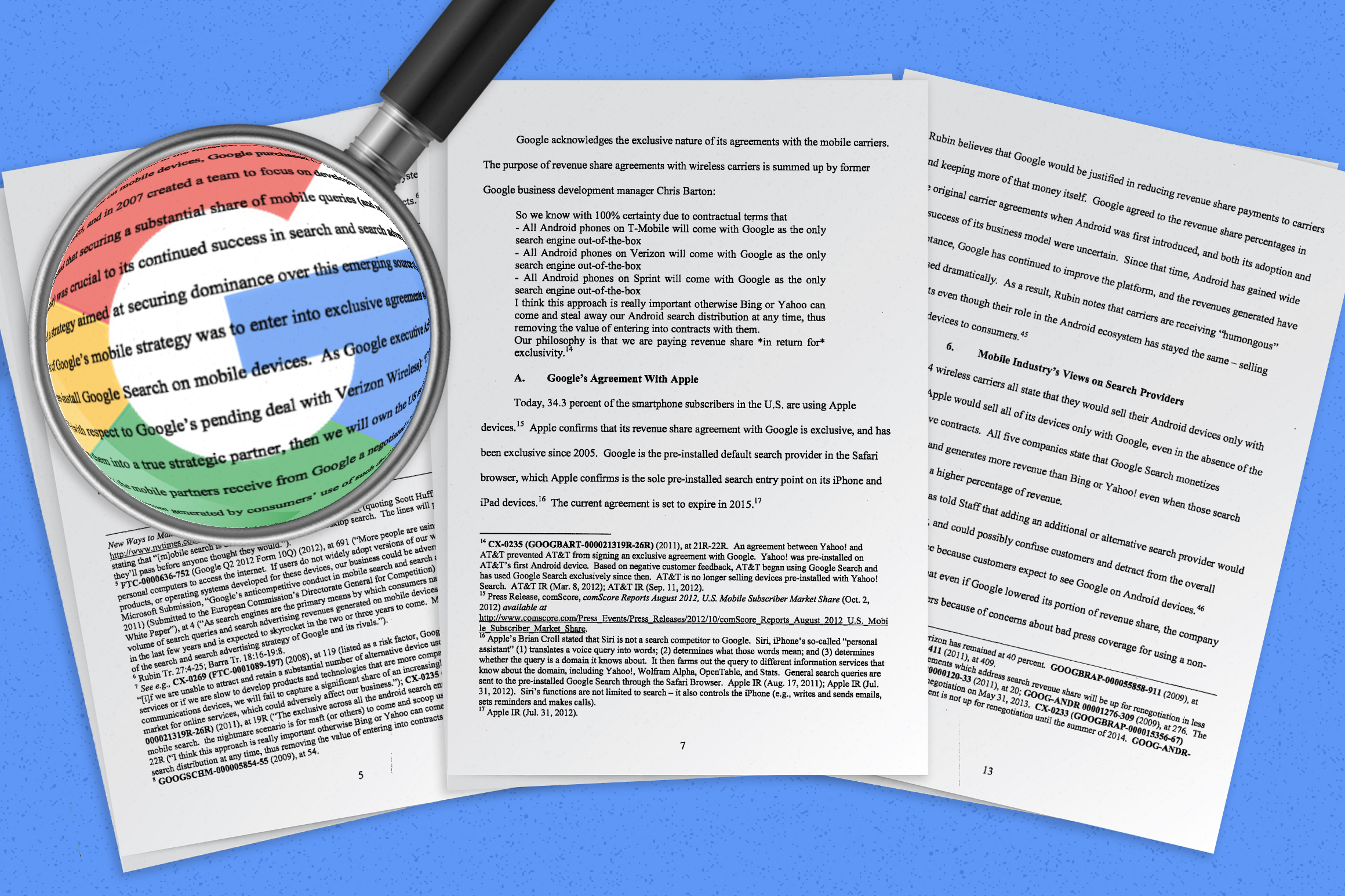 Federal investigators were convinced: Google’s push to take over mobile internet searches was illegal. They had the evidence and urged their bosses to sue. But those politically appointed bosses overruled them.

Nearly a decade later, the Justice Department and state regulators are suing Google over the same multibillion-dollar smartphone contracts that investigators for the Federal Trade Commission flagged years ago — and arguing that the deals present some of the strongest evidence that Google has built a monopoly.

Hundreds of pages of unreleased internal FTC memos, obtained by POLITICO, show for the first time that the agency’s commissioners dismissed substantial evidence to support the monopoly claim, including taking the rare step of rejecting a recommendation by staff investigators to sue.

The contracts at the center of the fight made Google the default search engine on almost all U.S. smartphones and locked in that exclusivity for years, giving the company a major advantage just as Americans were starting to flock to smartphones. In its antitrust suit against Google last October, DOJ revealed that the company pays as much as $12 billion a year to Apple alone to keep its search engine as the default on iPhones, iPads and the Safari browser.

The FTC memos suggest Obama-era regulators passed on an opportunity to rein in Google when the company still had viable competitors. Eight years later, Google is the undisputed leader in both online and mobile search — a fact that will make it difficult for today’s prosecutors to craft a remedy even if their current lawsuits succeed.

“I always assumed the staff memo was not so specific, direct and clear about the path ahead. A lot of the DOJ case is in there. It’s really breathtaking,” said Kovacic, who was at the FTC when it voted to open the Google probe in 2011, but left the agency three months later when his term expired.

Google declined to comment Monday on the FTC lawyers' recommendation to sue over its mobile contracts.

Among the revelations in the documents, which the FTC has never made public: A top Google executive bragged in an email to the CEO that Google could “own the U.S. market” with its exclusive contracts with major phonemakers and carriers. The contracts made Google the default search engine on 86 percent of U.S. smartphones. And the company acknowledged making “humongous” payments to carriers solely to keep rivals like Yahoo and Microsoft from getting prime access to people’s devices.


Those findings came from the FTC’s antitrust attorneys, who concluded that Google was breaking the law by “banishing potential competitors” from mobile phones. They proposed the FTC sue and seek a settlement requiring changes to Google’s contracts. The agency’s economists took the opposite view, recommending against a suit because mobile commanded only a small share of the market.


But those antitrust investigators only make recommendations. The decision on what action to take rests on the FTC’s five commissioners, presidential appointees who operate independently of the executive branch. One of the commissioners, Republican Tom Rosch, was a hold-over from the George W. Bush years. Three others — Republican Maureen Ohlhausen and Democrats Julie Brill and Edith Ramirez — were Obama nominees. FTC Chair Jon Leibowitz was a Bush pick, but Obama elevated him to chair and then nominated him for a second seven-year term.

In most cases, commissioners of both parties follow the advice of the FTC attorneys, widely seen as experts in the cases they investigate, said Kovacic, who spent seven years as an FTC staffer before he became a commissioner and later chair under President George W. Bush.

The Google probe was different. In this case, the commissioners followed the recommendations of their staff economists, who argued that the mobile market for search was too small to pose an antitrust issue.

Kovacic, who is now a director at the U.K.’s competition agency, argued that the commissioners were too reluctant to proceed. “This is such a story of risk aversion,” he said.

The FTC was conducting a broad investigation into a number of Google’s search products in 2012 and has never publicly confirmed that it investigated the mobile phone contracts. One commissioner said after the probe ended that the agency had looked at the contracts and found no problems.

READ:  Regeneron CEO: Trump 'is a case of one' and 'weakest evidence' for Covid-19 treatment

The findings by the agency’s antitrust investigators suggest differently.

In one October 2012 memo, 18 FTC lawyers and paralegals told the commissioners that Google controlled 97 percent of the global market for mobile search and that its contracts with phone providers made it the default search engine on 86 percent of U.S. smartphones.

U.S. antitrust law does not define what market share makes a company a monopoly, but several courts have set 70 percent as a threshold. By that measure, both of the FTC staff’s estimates would qualify Google as a monopolist on mobile.

In an interview with FTC staff in August 2012, Google’s then-Android chief Andy Rubin said the company had made “humongous” payments to the mobile phone providers to assure exclusivity — a move that opens the company to accusations that it overpaid to dominate a market. In a 2005 contract, for example, Google agreed to pay Apple half the revenue it earned from mobile search ads for five years in exchange for being set as the default. Google signed contracts with AT&T, T-Mobile, Sprint and Verizon to pay them between 15 and 40 percent of that revenue.


While the contracts with these companies started out with large payments, Google sought to give them a smaller percentage over time. The Apple contract, for example, dropped from a 50 percent ad revenue payment by Google for the first five years to 40 percent afterward. With Sprint, Google first gave the company 40 percent then reduced it to 32 percent. In an internal presentation, Rubin called the strategy “Change The Rules/Get A Better Deal.”


Rubin also touted internally Google’s plan to corner the mobile phone market — a goal that usually rings alarm bells for antitrust regulators. In a 2009 email to then-CEO Eric Schmidt, Rubin said a pending contract with Verizon to drop Microsoft’s Bing search engine and sign on with Google would let the company “own the U.S. market.”

Another indication that Google viewed the contracts as a potential way to block competitors: A Google business development manager wrote in a 2011 email to other company executives that “the value of entering into contracts” with AT&T depended on the carrier shutting out Bing and Yahoo. “Our philosophy is that we are paying revenue share *in return for* exclusivity,” the executive wrote.

Google argues that companies like Apple choose its search engine because it offers the most useful results to consumers.

And Google has had to contend with the risk that Apple, which exerts tight control over the software on iPhones and iPads, might someday shut Google’s products out of that platform. (Shortly before the probe closed, in fact, Apple made its own mapping app the default for iPhones in place of Google’s.) Another potential danger came from Microsoft, which spent years trying to make its Windows Phone operating system a viable competitor to Google’s Android and Apple’s iOS.

The future of the mobile market also was not as easy to predict a decade ago. The FTC’s economists, whose arguments swayed the commissioners not to sue, noted in an August 2012 memo that only 8 percent of internet searches came from phones at that time, and that consumers could easily change their phones’ default search engine.

“A few taps to switch to another search provider must be near the lower bound in switching costs,” they wrote, italicizing the words for emphasis. To claim that Google’s agreements limit consumers’ choice, they wrote, “one would have to argue that a few taps is prohibitively exclusionary.”


And senior FTC economist Ken Heyer argued in a September 2012 memo that the competition among search providers for contracts would help mobile carriers snag the higher payments.


In discussions in the summer of 2012, Apple and the four wireless carriers told FTC lawyers that even without the exclusive contracts they would still probably make Google the default search engine on their phones because Google offered a higher rate of return on advertising.

Google’s exclusive contracts, though, blocked companies from seeking better deals elsewhere. Both Sprint and AT&T told FTC lawyers they might be willing to switch to Bing if Microsoft offered a higher revenue share than Google, but they were already locked into the Google contracts.