OAKLAND — Los Angeles Mayor Eric Garcetti on Tuesday embraced a more limited role for law enforcement that could include a diminished budget as he faces growing pressure to defund the city’s powerful police department.
During a POLITICO California Pl… 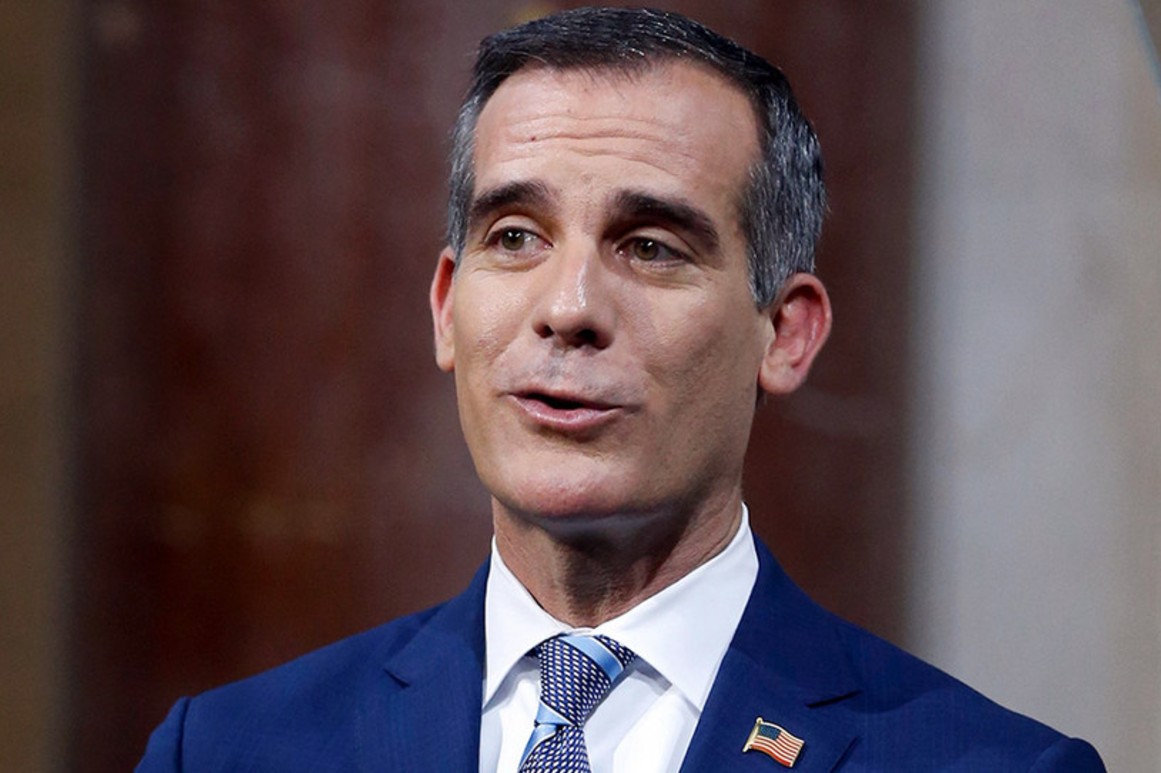 OAKLAND — Los Angeles Mayor Eric Garcetti on Tuesday embraced a more limited role for law enforcement that could include a diminished budget as he faces growing pressure to defund the city’s powerful police department.

During a POLITICO California Playbook Virtual Briefing, Garcetti also declined to unequivocally endorse Los Angeles District Attorney Jackie Lacey for reelection as she seeks to fend off a progressive challenger, potentially depriving the incumbent of critical campaign support in a fiercely contested race that has become a national referendum on police reform.

A day after Black Lives Matter activists made an extraordinary plea to the Los Angeles City Council, Garcetti supported rising calls to reevaluate police funding. While the mayor did not embrace calls to fully defund or dismantle police departments, he said it had become "crystal clear to all of us that we are underfunding black communities."

"If we're going to step up to this moment we have to look at all budgets, including police budgets," Garcetti said. But he insisted that the issue "isn’t about a single budget," noting that if "you ask three people what 'defund the police' means, you’ll get three different opinions."

In the wake of George Floyd’s death, Garcetti said a key question is how cities can transform the culture of policing "from a gladiator to a guardian mentality."

That means examining the complex issue of "the fundamental business of policing," he said, including whether police officers should be dispatched to address homelessness, respond to mental health, family matters and truancy.

The Los Angeles Police Protective League, the city's police union, recently joined other prominent California law enforcement unions in backing reforms such as a national misconduct registry. But the union has clashed with Garcetti in recent weeks and went so far as to advocate for his removal.

READ:  MAGA voters wanted a new home online. Supporters of a Chinese movement gave them one.

Garcetti said he hoped to find common cause with union officials in envisioning a more limited law enforcement role in which they focus on "those truly violent acts in our society where we need them to be guardians," saying “maybe we shouldn't have everything shouldering on the backs of our police officers."

"I hope that they will be at the table and get past kind of any rhetoric or division," Garcetti said.

The L.A. police union was not immediately available Tuesday for comment.

As advocates clamor for more police accountability, Garcetti endorsed a proposal from California Attorney General Xavier Becerra to decertify police officers who have committed serious misconduct and advocated having independent prosecutors investigate police shootings rather than having district attorneys do the investigations.

Growing attention to police reform has put a spotlight on the role of elected prosecutors, and Los Angeles is hosting the most important district attorney race in the country.

Lacey, the incumbent, is fending off a challenge from former San Francisco District Attorney George Gascón, who has centered his campaign on a reformist message that includes depicting Lacey as too cozy with law enforcement and unwilling to prosecute police officers for misconduct.

Garcetti previously endorsed Lacey, but he said Tuesday that he was reevaluating his stance on the race.

“I’m looking closely at it,” Garcetti said, adding that he would “turn to the race in the coming weeks.”

Lacey downplayed Garcetti’s words, saying in a statement that Garcetti is “dealing with multiple crises” and understandably “does not want to get involved in a political campaign right now."

“I'm proud to have the support of so many of the leaders and organizations serving our region through this crisis right now, from Adam Schiff to Hilda Solis to the L.A. County Labor Federation,” Lacey said.

Weeks of protest over Floyd’s death and calls for police reform have sharpened Gascón’s message, with his campaign citing a surge of volunteers and donations. And Garcetti has repeatedly said he is rethinking his prior endorsement of Lacey.

Garcetti said he chose to back Lacey before Gascón entered the race. But the Los Angeles mayor’s reluctance to back Lacey could reshape the contest — and it could affect Garcetti’s police reform agenda given law enforcement’s strong support for Lacey and animosity toward Gascón.

“I endorsed (Lacey) before George Gascón got into the race, and he's somebody I have tremendous respect for,” Garcetti said. “I worked with him when he was in Los Angeles Police Department has always been a very forward-thinking person.”