An Arkansas football tradition could shape the future of in-person sports during the pandemic. 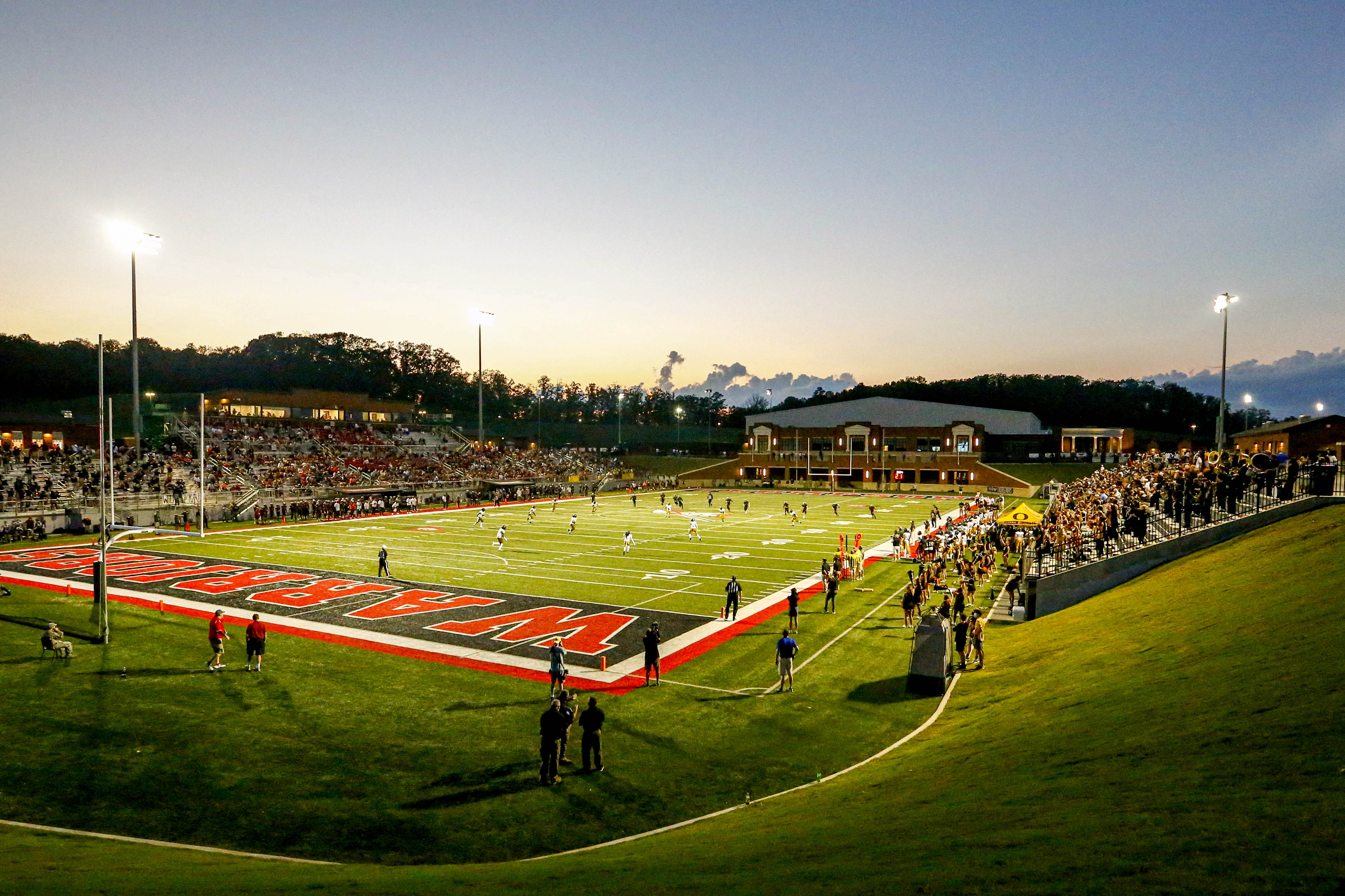 Arkansas’ famed Salt Bowl won’t have its usual party this year. The Dairy Queen-sponsored tailgate festival is canceled, as is the hot dog giveaway and pregame luncheon. No tickets will be sold on game day.

But this weekend’s annual kickoff between top state high school football teams will have something the NBA, NHL and Major League Baseball have prohibited so far during the pandemic: thousands of fans in the stands. As many as 12,000 mask-wearing spectators may stream into War Memorial Stadium in Little Rock on Saturday night for a high-profile event at which Republican Gov. Asa Hutchinson is scheduled to flip the pregame coin toss. One organizer has a custom face mask featuring both schools’ logos for Hutchinson to wear.

More is at stake than high school rivalry. The match — which promoters say will be the state’s largest outdoor event since the pandemic began — is a survival test for fall sports, as President Donald Trump and other Republicans cheer for football to play on.

If fans leave the stands and carry the coronavirus throughout communities struggling to quell the virus’ spread, it could crush dwindling hopes for attending crowded sporting events in the U.S. this year. If the Salt Bowl and other Southern football games don’t go down as super-spreader events, that success could keep the dream alive and give Trump and others searching for sign of normal times a major boost. It could be the driver for other big gatherings and revive squelched sports of all kinds.

“Everybody’s going to be watching,” said Shane Broadway, a Salt Bowl founder who notes the game drew upwards of 30,000 spectators before the pandemic. “We have the opportunity to kind of be the example to others on how to do this right.”

The Southeastern Conference — a college football powerhouse that includes schools in Alabama, Florida, Georgia, Mississippi, South Carolina and Texas — is calling for face masks and Plexiglass, physically distanced lines and single-serve condiment packets. All this, while fall college football is out of the question in broad swaths of the country.

Packing thousands of spectators into a stadium may sound crazy to a lot of pandemic-worried Americans who have upended their lives for months and avoided public places. But this is the South. This is football. The region’s cultural fabric is often built around Friday night lights.

“If we do it right, and they’re able to play on the next week, then maybe in some small way we take another step towards being normal — even though we’re still a vaccine away,” Broadway said. “But it still gives some hope.”

Stadium life will look this way for the foreseeable future: warnings about personal responsibility, lots of signage, hand sanitizer, contact tracing apps and maybe a mask.

But “any time you bring people together in those types of quantities, there’s bound to be exposures and there’s bound to be cases that you’ll have to deal with,” said Amesh Adalja, an infectious disease specialist at Johns Hopkins University. “It only takes one mass gathering to spark it again.”

On Sept. 26, Auburn University plans to open Jordan-Hare Stadium to roughly 20 percent of its capacity for the Tigers’ season-opening football game against the University of Kentucky. That leaves room for about 17,500 mostly student fans in a county where health officials report a high rate of infections per 100,000 people over the past two weeks and hundreds of campus cases.

“All attendees will share a responsibility for health and safety,” Auburn Athletics Director Allen Greene said last week. “A zealous commitment to face coverings, physical distancing and personal hygiene will lead to the best outcome."

Georgia Tech is planning for roughly 11,000 fans at Bobby Dodd Stadium, all of whom will be required to wear an “appropriate” face covering. Masks with mesh materials, open chin bandannas and “costume masks” won’t cut it.

In Tuscaloosa, roughly three hours from Auburn’s main campus, Covid-19 outbreaks at the University of Alabama prompted system President Stuart Bell to warn of an “unacceptable rise” in cases that threaten the school’s ability to complete the fall semester on campus. Mayor Walter Maddox ordered the city’s bars to close for the next two weeks, as UA’s campus logged more than 500 infections among students and staff since Aug. 19.

Alabama officials plan to open Bryant-Denny Stadium to 20 percent of its capacity — still more than 20,000 people — for the Crimson Tide’s Sept. 26 match against Missouri. Other schools in the Southeastern Conference are following similar protocols as they press ahead with a season this year, some with the blessing of their governors.

An executive order from Mississippi Gov. Tate Reeves, a Republican, allows colleges to hold games with fewer fans and under strict conditions. “Some states have opted not to make any effort to play. I believe we have to try. We can’t just abandon athletes and culture,” Reeves tweeted.

“I do think that having a packed college football stadium with college student fans that are likely to be screaming and yelling — and likely in some degree of intoxication, so unaware of the degree of social distancing they’re doing — all of that is going to lead to cases and clusters and outbreaks,” said Adalja, a member of the NCAA’s coronavirus advisory panel.

“That’s a foregone conclusion,” he said.

The Salt Bowl’s plans for fan safety, and those of football-hungry colleges, showcase the near-future look for stadium life. It’s part social distancing, mask requests and a dash of what some observers describe as "security theater."

Arkansas high school fans will have to wear masks at all times, except when eating or drinking. War Memorial’s concession menus will feature only prepackaged items. Signs will remind fans to follow health department guidelines allowing single household family groups to sit together but 6 feet from all other groups.

The Miami Dolphins plan similar game day routines at Hard Rock Stadium, where as many as 13,000 fans will be able to watch them play Sept. 20 against the Buffalo Bills, which has barred fans at home.

‘You can’t take the risk to zero’

The best-laid plans rely on a compliant public, sufficient game day staff to enforce the rules, hospital capacity to address outbreaks that could ensue and low virus levels in the surrounding area. 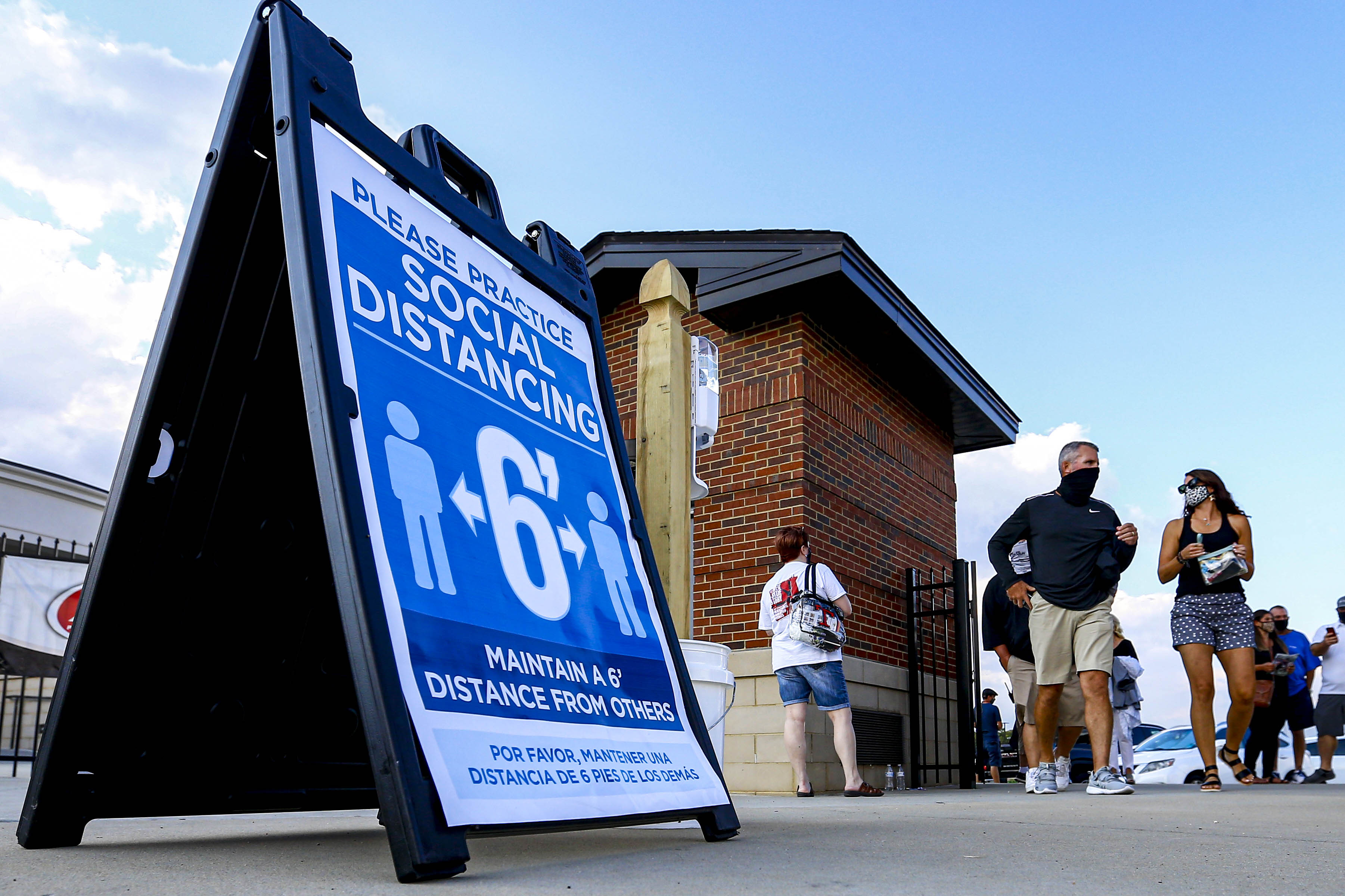 “When people focus on having only prepackaged food and stuff like that, I guess you’re reducing your risk a little, but you’ve forgotten where the risk is really high — which is all the people standing in line to get that food,” said Tara Kirk Sell, a Johns Hopkins infectious disease expert who helped stage a large, socially distanced basketball tournament earlier this summer. “The highest risk is from having someone you don’t know, or someone who isn’t being thoughtful about what they’re doing, breathing on you within 6 feet.”

So-called super spreader events tend to occur when lots of people are in close contact, Sell said, particularly indoors. Outdoor activities are better, she said, but even those games don’t occur in a vacuum. People use shuttles, crowd in concourses, visit bars and restaurants. It’s those related events that make transmission more possible and super-spreading events more likely.

If this summer’s crowded beaches and bars prove anything, it’s that people don’t want to be told what to do. That’s leading to an emerging adoption of “harm reduction” public health strategies for the coronavirus that involve educating the public about how they can cut risks associated with their behavior.

“But you can’t take the risk down to zero, and increasingly in the United States people are willing to take these risks. This has kind of been the theme throughout the pandemic,” Adalja said.

Down in Arkansas, Salt Bowl organizers are keeping an eye on the weather, ticket sales and the teams' health.

“We don’t want the first game of the year to be the last game of the year,” Broadway said. “All you can do is control yourself, and at some point in time people have to make responsible decisions for themselves.”