The deposed university president took the stage at a student event Thursday. 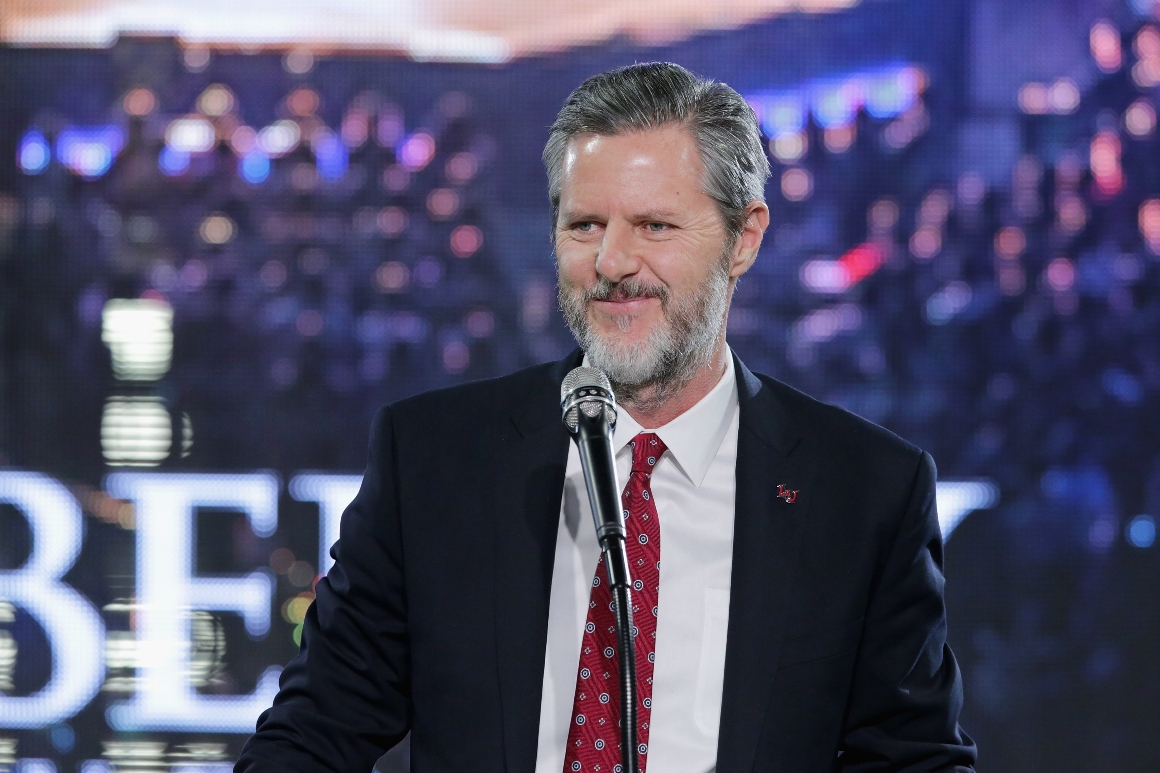 Two weeks after Liberty University sued him and banned employees from talking to him, former Liberty president Jerry Falwell Jr. unexpectedly showed up at a student event Thursday night, hopped on stage and invited the students to a graduation party at his home that he billed as “the real Liberty graduation.”

“I just want to invite all the seniors to my farm on May 8. We’re going to have the real Liberty graduation,” Falwell told the students, standing on a small stage erected outside an off-campus student house, according to a video reviewed by POLITICO. “If you’re not a senior but you date one, you can come, too.”

The appearance seemed an act of defiance from Falwell at a time when the university has taken an increasingly tough stance against him. His 13-year tenure as Liberty president, during which time the evangelical school grew to more than 100,000 students in person and online, ended after a series of scandals involving his and his wife Becki’s personal behavior. They included Becki’s affair with a former pool attendant in which Falwell allegedly participated; he has denied any participation. In addition, a former student said Becki initiated a sex act with him. Falwell also posted a picture of himself with his pants unzipped and arm around a woman at a yacht party.

On Thursday, roughly 200 students had gathered outdoors for a stand-up comedy night, and Falwell was not expected to make an appearance, according to a student present.

But Falwell showed up partway through the event with Becki at his side, the student said. He soon hopped up on stage, lamenting that his student daughter — who he said was in the audience — had told him, “Please don’t come.”

“You’re still my president!” one student yelled when Falwell took the stage, according to a video reviewed by POLITICO. Others laughed and cheered Falwell’s name. Then Falwell invited students to a party at his farm, a multibuilding property near Liberty.

“We’d love to have you out there. Becki says there’s no way we can plan it that fast, but we can and we will,” Falwell said, encouraging students to spread the word on social media.

Before taking off, Falwell added a self-deprecating note, telling the audience, “Anyway, I’m a little fatter than I used to be.” He and his wife left soon after.

Just two weeks ago, Liberty sued Falwell, alleging he had withheld from the university damaging information about an alleged extortion attempt by the former pool attendant, Giancarlo Granda, who claims his affair with Becki, which Jerry sometimes watched, began when he was 20. It also banned faculty and staff from communicating with Falwell, saying his presence at Liberty could interfere with an ongoing investigation into his tenure as president.

Falwell did not immediately respond to requests for comment.

Critics of Falwell called Falwell’s appearance at the student event inappropriate, and cited the affair with Granda and the allegations of a former Liberty student, who says Becki Falwell surprised him by performing an oral sex act on him at the Falwells’ farm when he was in a band with the Falwells’ son, Trey.

That alleged encounter “occurred at the same house that they’re inviting students to for a graduation party,” said Calum Best, a Liberty alumni and co-founder of the pro-Liberty reform group Save71 . “Nobody in the administration has the backbone to stand up and say this is wrong, so Falwell still does crazy stunts like this.”

Liberty University is investigating Falwell’s presidency but the investigation appears to focus only on possible financial mismanagement at the university, not personal conduct.

And Falwell, who has spent much of his career at the university founded by his father, Rev. Jerry Falwell Sr., has resisted any attempts by Liberty to distance the university from him. After being pushed to resign as president, he has repeatedly posted social media photos of himself on campus. And in an interview earlier this spring, Falwell said that Liberty’s staff and board have been “nothing but supportive” in the wake of his departure.

“The students all want to get their picture with me. They thank me,” Falwell said.