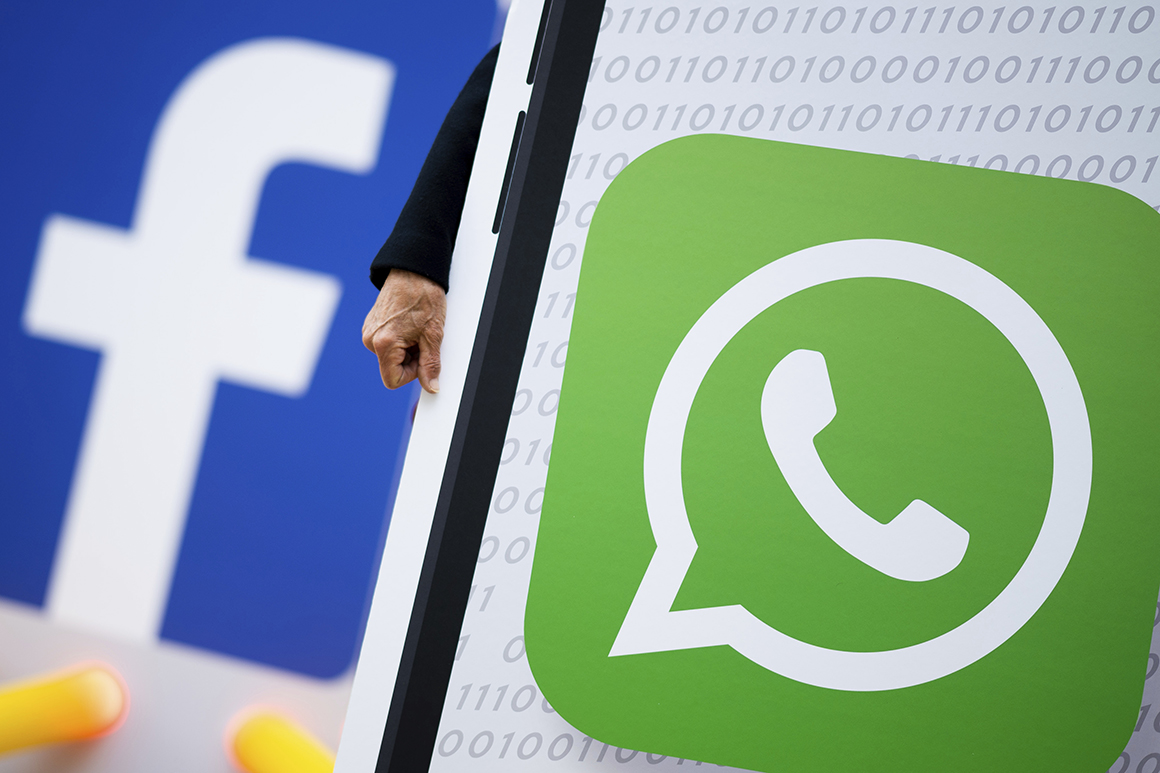 WhatsApp is forging ahead with a new privacy policy that will expand Facebook's grip on consumer data, despite pressure from users and lawmakers to reverse course — intensifying alarm about Silicon Valley writing its own rules of the road on data in the absence of regulation in the U.S.

Under the new rules, set to take effect Saturday, users must agree to let Facebook use data from their interactions with businesses on WhatsApp to target ads across its platforms.

The changes were set to take effect in February, but after widespread consumer backlash to the announcement — which prompted a flood of angry tweets like “stop Facebook from using you” and drove many to alternatives like Signal and Telegram — the company delayed the roll-out. Critics have since cried foul on Mark Zuckerberg’s pledge from 2014, when Facebook bought WhatsApp, to ensure his company would “absolutely not” change WhatsApp’s approach to user data and that the social messaging app would operate autonomously.

“We can't keep letting the largest companies in the world, founded in the United States, break their promises,” Rep. Lori Trahan (D-Mass.), who has led a push by some House Democrats to force Facebook to reverse course, said in an interview. “Facebook should uphold their promise, and that of WhatsApp's founders, to prioritize the privacy of their users.”

The conflict highlights the mounting struggle on the part of Congress to check the power of tech companies, even when lawmakers’ constituents are up in arms.

Technology companies are growing and innovating faster than laws and leaders in Washington can move, and it’s unclear how the new administration and Congress will catch up. Lawmakers’ prolonged impasse on a national privacy law has left the door open for the most influential players in the tech world — including Facebook, Apple and Google — to self-regulate and write their own playbooks for how data can be shared across companies and around the world.

WhatsApp and Facebook have long exchanged valuable metadata — “data about the data,” as Trahan put it — which offers insight into consumers’ behavior and is extremely important for advertisers. But the messaging app’s growth in the U.S. early in the pandemic, coupled with it being tangled in antitrust suits and probes around the world, has drawn a new level of scrutiny to the way data on its more than two billion users is shared across the Facebook ecosystem.

Facebook’s 2014 acquisition of WhatsApp is now a main focus of antitrust suits by the FTC and attorneys general from nearly every state. Those cases, which allege that Facebook bought WhatsApp to prevent it from growing into a rival that would siphon off its users, are seeking to force Facebook to spin off WhatsApp and Instagram. Brazil and the European Union are also pursuing action against Facebook related to WhatsApp’s handling of user data.

And now users are being asked to give Facebook more power to use information about their shopping habits on WhatsApp for advertising and marketing purposes.

The company has stressed that the actual content of personal messages remains end-to-end encrypted and not visible to Facebook or advertisers.

Public interest groups say that Facebook is misleading users by playing up the encryption protections.

“This is not about protecting privacy, this integration; this is exactly the opposite,” said Jeffrey Chester, executive director of advocacy group Center for Digital Democracy. “This is about exposing the tens of millions of WhatsApp users who use it for vital communications daily, to allow the company to more effectively track and target them with advertising and marketing to bolster its bottom line.”

Despite calls for regulatory scrutiny on Facebook, and for the company to halt its plans for WhatsApp, Washington is quickly ceding ground to Silicon Valley on privacy. Congress’ continued failure to pass federal data privacy legislation — stalled by sticking points that are far from being resolved — has given Facebook and other tech companies room to set their own standards.

“We cannot let the industry create a new privacy regime on a de facto basis,” Chester said, “but because there's no privacy legislation, because the FTC is basically seen as weak, anything goes.”

Although WhatsApp is updating its policies globally, because of the EU’s privacy rules, known as the General Data Protection Regulation, it will not change WhatsApp’s data-sharing practices in the European region.

In the absence of legislation in the U.S., many see antitrust enforcement, including the potential unwinding of Facebook, as a sidedoor to begin tackling privacy problems.

Sen. Mark Warner (D-Va.), who has been vocal about other WhatsApp issues, called for more antitrust scrutiny on WhatsApp’s “enormously concerning” push toward the new privacy policy.

“I hope competition enforcers will closely look at this as they examine the ways in which the largest platform companies, like Facebook, have sought to cement their dominance, including in mobile messaging,” he said.

Others are looking to agencies. Trahan, a member of the Congressional Hispanic Caucus who has raised alarm about the policy change having a disproportionate effect on Hispanic Americans who use the app, called for more resources for the Federal Trade Commission “to do merger review and bring privacy cases so we can avoid these types of data rights violations in the future.”

But those avenues may be far in the future, and WhatsApp is transforming its data practices now. And experts worry that the further entrenched these policies become — in the U.S. and around the world — the harder they’ll be to roll back.

Burcu Kilic, digital rights program director for the progressive advocacy group Public Citizen, said that if global regulators had been “more diligent” about Facebook’s deal to buy WhatsApp years ago, it would be a more privacy-conscious app today.

“They couldn't see the far-reaching implications,” she said. “Now we ended up with an app that we use — and for many people, their life depends on it — but we have to compromise some of our data.”

Trahan, who represents one of the largest immigrant communities in Massachusetts, called the policy change “a false choice” for many of her constituents. For them, WhatsApp is a lifeline to communicate with family members overseas, particularly in Latin America, due to the high costs of traditional text messaging there, she said.

“There's no alternative,” she said. “This is their form of communication with their loved ones abroad. You're either opting in, or you have no other way to communicate.”

Facebook says that WhatsApp’s growth, and users’ overwhelming acceptance of the new terms, show they are on board with the changes.

“The majority of people who have received [the information] have accepted the update and WhatsApp continues to grow,” said WhatsApp spokesperson Danielle Meister.

Yet some of the platform’s biggest rivals have seen enormous growth ahead of WhatsApp’s changes taking effect, suggesting resistance to the update. A report from data analytics firm Sensor Tower found that WhatsApp usage has been dropping, even more dramatically in the months since the privacy changes were announced.

Facebook has also said that those who have not accepted the terms won’t be suspended from WhatsApp on May 15 and that the platform won’t stop working for them — at least not yet. Instead, those users will begin seeing increasingly persistent messages to review and accept the revamped policy, and the app will slowly stop working.

Some experts have described such a technique as “nagging”, “confirm-shaming” or “user intimidation.”

“Consumers get worn down by this,” Lior Strahilevitz, a University of Chicago law professor who focuses on data privacy, said at a recent FTC workshop. “Eventually they just say, ‘Well, they’re going to get me eventually, so I may as well go ahead and agree.’”