The Facebook CEO declined to take action against Trump tweets that were interpreted as inciting violence. 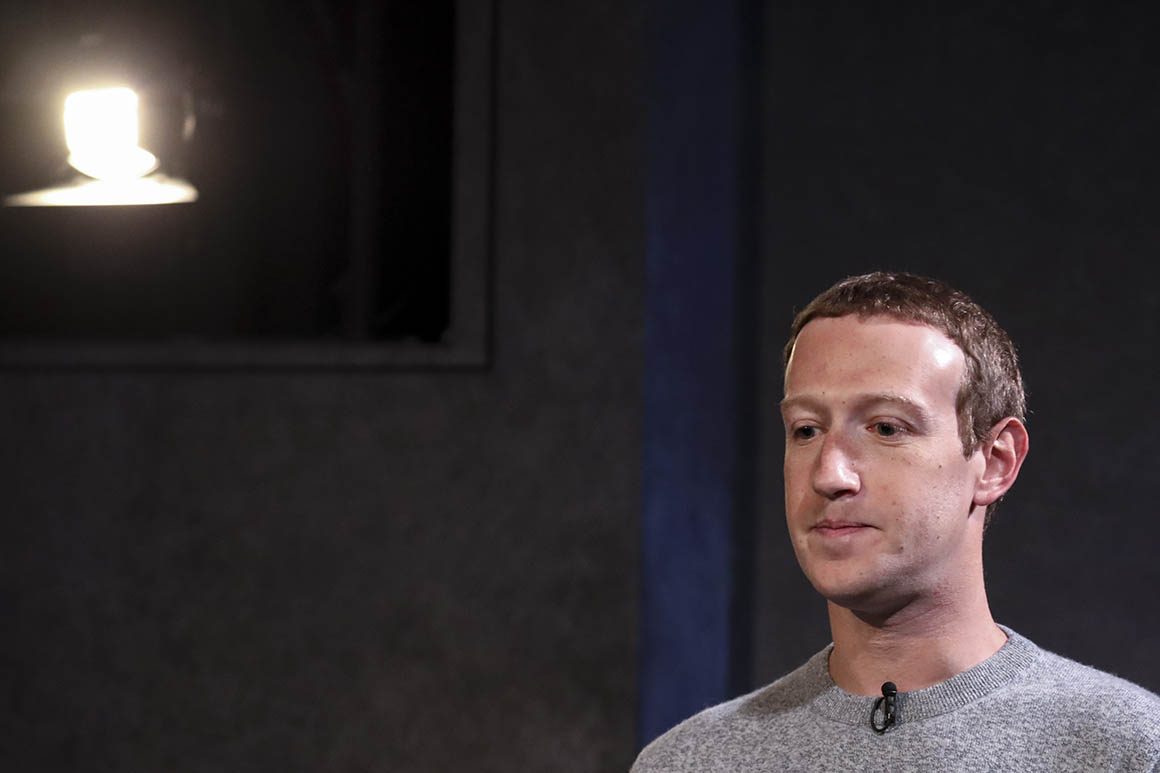 The growing employee backlash against Facebook CEO Mark Zuckerberg over his refusal to act on President Donald Trump’s incendiary tweets about protests is exposing a fracture inside the company over the boss’ commitment to letting politicians speak freely.

Scores of employees across the country, including at management level, declined to work on Monday in protest. And many took to social media to express their dissent — a rare act of public defiance of Zuckerberg at a tight-lipped company where many employees revere him.

“I work at Facebook and I am not proud of how we’re showing up. The majority of coworkers I’ve spoken to feel the same way. We are making our voice heard,” Jason Toff, a director of product management, tweeted on Monday.

“The hateful rhetoric advocating violence against Black demonstrators by the U.S. president does not warrant defense under the guise of free expression,” one company official posted on their Facebook profile. The person, a former Republican senior staffer who was among those who took off work, declined to be named out of concern about public recrimination.

The intensity of the reaction is a particularly revealing example of how Zuckerberg’s approach to political involvement is creating as many problems for him as it is solving. Liberals wonder if the man having private phone calls and dinners with Trump is cozying up to the administration, while conservatives allege that Facebook's efforts to draw lines on certain content smack of bias. In deciding in this latest case not to act against the president of the United States, Zuckerberg may find that he has put himself in the most contentious position yet — risking internal revolt.

The Trump tweet that ignited the debate came early Friday morning, about protests over the death of George Floyd under the knee of a white Minneapolis police officer. "When the looting starts, the shooting starts," he tweeted in part. Twitter labeled the tweet for "glorifying violence" for threatening demonstrators, though Trump later said he was referring to looters themselves becoming violent. Zuckerberg declined to take action despite what he described in a post as a "visceral negative reaction" to Trump's post.

The public reaction was swift but expected: many liberal groups denounced the lack of action while many Republicans applauded it. Then as protests against racial injustice swept across American cities and Trump continued to demand an iron-fist response from military and police over social media, anger inside the company started to cross to action.

“Censoring information that might help people see the complete picture is wrong. But giving a platform to incite violence and spread disinformation is unacceptable, regardless who you are or if it’s newsworthy,” tweeted Andrew Crow, Facebook’s head of design for Portal. “I disagree with Mark’s position and will work to make change happen.”

“As allies we must stand in the way of danger, not behind,” product designer Sara Zhang tweeted Monday. “I will be participating in today's virtual walkout in solidarity with the black community inside and outside FB.”


The New York Times reported Monday that some employees have also threatened to resign and at least one prospective hire declined a job offer. Zuckerberg is moving a weekly discussion with employees from Thursday to Tuesday to assuage concerns, the Times noted.

“We recognize the pain many of our people are feeling right now, especially our Black community,” Facebook spokesperson Andy Stone said in a statement. “We encourage employees to speak openly when they disagree with leadership. As we face additional difficult decisions around content ahead, we'll continue seeking their honest feedback."

But Zuckerberg has made it clear that popularity isn’t his objective. He’s acknowledged in numerous public comments that his staunch dedication to free speech and resisting calls to filter inflammatory political rhetoric will never please the company’s growing chorus of critics.

“My goal for this next decade isn't to be liked, but to be understood,” Zuckerberg told investors in January. “In order to be trusted, people need to know what you stand for.”

"If you're going to make free expression the paramount value and if you're to say that you don't believe it's your role to be fact-checking political speech, both of which I think are right, then this is what that looks like," said Jesse Blumenthal, who oversees tech policy for the Koch-backed advocacy group Stand Together. "And it's not surprising to me that people don't like it, including some of Facebook's own employees."

Late Sunday night, however, Zuckerberg followed in the footsteps of Twitter, Amazon, Uber, AT&T and other companies expressing support for the black community following the death of a Minneapolis man named George Floyd and other African Americans killed by police. “We all have the responsibility to create change,” the 36-year-old CEO wrote and, to start, Facebook will dole out $10 million to racial justice groups.

READ:  How Trump got a Bush to bend the knee

Civil rights advocates who have long prodded Facebook to improve its reputation on race, from hiring more minority engineers and executives to taking a tougher stance on white supremacists, were unimpressed with the late-night missive. Several of those leaders expressed their outrage to Zuckerberg directly in a phone call Monday that left them “disappointed and stunned” by his explanations.

“Mark Zuckerberg thinks he can put a $10 million price tag on our silence. He's wrong,” tweeted Rashad Robinson, the president of the racial justice group Color of Change, who shared his civil rights concerns with Zuckerberg at a dinner in November.

“You can't call Trump and let him keep up a statement inciting violence against Black people, refuse to speak to civil rights leaders & Black employees, and then write a check to make it go away,” Robinson continued.

Vanita Gupta, the CEO of the Leadership Conference on Civil and Human Rights, tweeted Monday that Zuckerberg has chosen not to enforce Facebook’s prohibitions on voter suppression and inciting violence, policies that her organization and others had worked with the company to develop. His donation, she wrote, amounts to “#bloodmoney.”

“No amount of money can absolve the fact that his inaction on Trump's tweets is directly putting Black lives and our very democracy in the line of fire,” Gupta tweeted.

Zuckerberg has cited the black civil rights movement and its leaders, including Martin Luther King Jr., as an inspiration for his views on free expression. Restricting speech often results in minority voices going unheard, he told a crowd at Georgetown University last fall, and he’s proud Facebook offers an open forum. The first #BlackLivesMatter hashtag appeared on Facebook, he boasted.


“What tech companies are now faced with is the extent to which they have been involved in the type of political polarization that we're seeing in society today,” said Nicol Turner-Lee, a fellow in the Brookings Institution's Center for Technology Innovation. “Maintaining that level of violence-inducing language in the public domain is not necessarily helpful when there is not a response which carries the same political weight.”

“There needs to be a distinction between free and responsible speech, particularly when you are at a crossroads of a chaotic event that is causing more and more civil unrest," Turner-Lee continued. "Because the problem is not necessarily being addressed by our leadership."

The reaction to Zuckerberg’s decision marks a contrast to that received by his peer, Twitter CEO Jack Dorsey. Dorsey’s company has earned praise from Democratic lawmakers for adding warning labels to Trump’s tweets in recent days, while drawing the anger of Trump and his allies. Indeed, Trump signed an executive order seeking to curtail social media companies' legal protections after Twitter indicated two of his tweets on mail-in voting were misleading.

“I’m glad to see Twitter taking action on the President’s attempts to mislead voters, in violation of the platform’s rules,” Democratic Sen. Mark Warner of Virginia tweeted Monday. “It’s a shame that Facebook seems unwilling to stand up for truth on its platform.”

Meanwhile, Facebook’s decision to leave up Trump’s post has been met by rare plaudits from one key corner — Republicans who have railed against the company and its social media rivals over allegations they stifle conservative speech. The warm reaction could mean Facebook and Zuckerberg’s attempts to both privately and publicly woo Republicans is paying off.

Zuckerberg attended a secretive dinner with Trump at the White House last year, igniting accusations from Democratic lawmakers that the tech mogul was cozying up to the administration to ward off regulatory scrutiny. It was one of several sit-downs by the Facebook chief and top political leaders in Washington, including a series of prominent GOP tech critics. He also spoke with Trump by phone Friday.

“I agree with what Mark Zuckerberg said when he said that social media shouldn’t be the arbiter of truth of everything that people say online,” House Minority Leader Kevin McCarthy, who also met with Zuckerberg during his D.C. charm offensive, said at a press conference last week.

Yet despite supporting Facebook’s latest decision on Trump’s divisive messages, don’t expect the tech giant’s most vocal critics on the right to let up the pressure.

Maria Jeffrey, a spokesperson for Sen. Ted Cruz (R-Texas), told POLITICO on Monday that while the company made “the right move” by keeping up the president’s posts, “The fact remains that Silicon Valley billionaires can easily censor, deceive, and manipulate without consequence.”

“[Cruz] will continue working with his colleagues and the Trump administration to protect free speech and hold Big Tech accountable to the American people,” she said.