For many House Republicans who voted to overturn the election results, small donations helped offset the loss of corporate PAC money. 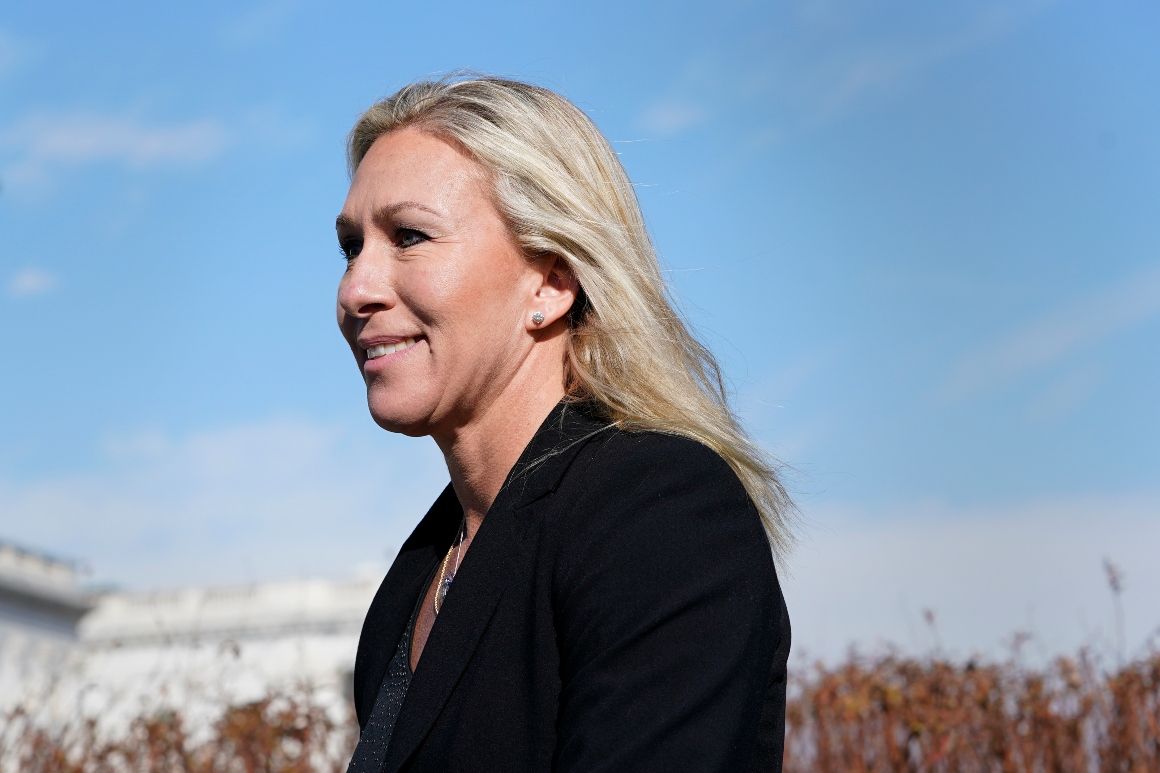 Most House Republicans who objected to the certification of President Joe Biden’s victory saw their small-dollar fundraising rise in the first three months of this year compared to the same quarter in 2019, in the latest indication that Republicans aren’t facing a major cash crunch three months after many corporate PACs vowed to stop giving to their campaigns.

The rise in small-dollar donations helped to offset a decrease in PAC donations for many members, according to an analysis of quarterly campaign finance data that was due Thursday.

While 55 of the 95 House Republican objectors whose filings POLITICO analyzed saw their fundraising decline compared with the first quarter of 2019, 40 saw it rise.

And a majority of them — 57 — saw their small-dollar fundraising go up compared with the first quarter of 2019.

In total, nearly two-thirds of the House Republican conference — 139 members — voted against certifying Biden’s victory on Jan. 6, after then-President Donald Trump’s unfounded claims of widespread election fraud. Trump’s lie that the election was stolen from him helped fuel the rioters who stormed the Capitol, interrupting Congress from certifying the results. Eight Senate Republicans also voted against certifying the results.

Backlash was swift, with at least 200 businesses pledging either to freeze corporate PAC donations or withhold them to those who voted against certification.

Increased contributions from small donors offset a decrease in overall PAC donations — a broader category that includes corporate PACs — for the Republicans who objected to the election. Eighty Republicans saw a decrease in PAC fundraising over that same time period. Just eight saw an increase.

POLITICO’s analysis excludes the 32 Republican House freshmen who voted against certification, as well as six Republicans who won special elections last cycle. It also leaves out Rep. Jeff Van Drew (R-N.J.), who switched parties in 2019; former Rep. Ron Wright, who died in early February; and four lawmakers who had not yet filed or transferred a large amount of cash from a different campaign committee, making comparisons difficult.

But some freshman were among the most prolific fundraisers among those who voted to overturn the election results — including Reps. Marjorie Taylor Greene (R-Ga.) and Madison Cawthorn (R-N.C.), who both have embraced Trump’s lies about the election.

Greene raised over $3.2 million during her first quarter as a member of Congress, and her campaign said she had over individual 100,000 donors give to her, which rivals or surpasses incumbent senators who are facing reelection.

Greene plowed a significant amount of her haul into building up her small-dollar list, an early sign that her massive fundraising quarter will not be a one-off phenomenon, though it will be expensive to maintain. She paid over $800,000 to five different vendors for fundraising list rentals and emails, and spent $30,500 on advertising on Parler, a social media site popular with Trump supporters.

Cawthorn raised over $1 million in the quarter, another massive haul. Cawthorn even fundraised off of Trump’s “Stop the Steal” mantra before the Jan. 6 riot.

Senate Republicans who also led the charge to overturn the election results also saw their fundraising spike. Sen. Josh Hawley raised more than $3 million in the quarter — including nearly $600,000 in the 2 1/2 weeks after the riot, even though his campaign said they stopped fundraising outreach, his campaign told POLITICO.

Similarly, Sen. Ted Cruz (R-Texas), who also helped lead Republicans who wanted to overturn the election, told Fox News that he raised $5.3 million between his campaign and leadership committee, which included nearly 62,000 first-time donors to Cruz.


Some prominent House Republicans have embraced the backlash in their fundraising.

Rep. Jim Banks (R-Ind.) — who is the chair of the Republican Study Committee, the largest ideological caucus in the Republican conference — circulated a memo arguing that his vote to overturn the election was a net financial positive for him.

“When Eli Lilly and several other corporate PACs blacklisted me for objecting to the unconstitutional election rule changes in 2020, I reached out to individual donors, explained the situation, and asked for their support,” Banks wrote in the memo, which was first reported by Axios, saying that small donors made up the difference.

“Our digital fundraising efforts,” he continued, “should be paired with an explicit message: ‘I’m asking for a small donation, so I can continue to represent your values, not the values of liberal multinational corporations who are determined to replace conservatives like me.’”

READ:  For Derek Chauvin's trial attorney, it's all about raising doubt

For other lawmakers, the surge in small-dollar fundraising was more apparent.

Rep. Elise Stefanik (R-N.Y.), for instance, who announced on Jan 4. that she planned to object because she believed there were “serious questions with respect to the Presidential election,” raised more than $1.1 million in the first quarter — three times what she brought in in the first quarter of 2019.

Her PAC fundraising collapsed in the most recent quarter, falling to less than $5,000 compared with nearly $125,000 in the first quarter of 2019.

Companies whose PACs had written her checks in the first quarter of 2019 such as Comcast, Deloitte and the Blue Cross Blue Shield Association announced they would no longer donate to lawmakers who’d objected to the election results. Other corporate PACs that had donated to Stefanik in the past said they would “pause” their giving to all lawmakers.

But a surge in small-dollar fundraising more than covered the shortfall.

It’s not clear how long the corporate PACs that “paused” the giving will remain dark or who they’ll support once they reopen for business. Charles Schwab and HP both chose to shut down their corporate PACs permanently in January.

Besides the riot at the Capitol on Jan. 6 and its aftermath, the fundraising environment for members of Congress is drastically different in the first quarter of this year than it was in 2019.

In the first quarter of 2019, a demoralized House Republican conference had just lost the chamber amidst a wave of Democratic victories and retirements of long-serving Republicans. Democratic candidates, who have long had an advantage in small-dollar fundraising, raised nearly unfathomable amounts of money throughout the 2018 cycle. Nearly three-dozen newly elected House Democrats raised at least $300,000 in the first quarter of 2019.

READ:  CDC says coronavirus is airborne and can spread farther than 6 feet

But the Republican conference was emboldened following the 2020 election, in spite of Trump’s loss. The GOP, while still in the minority, flipped over a dozen House seats despite the fact that they were expected to lose seats on the eve of the election, while Republicans have also made strides in closing the gap in small-dollar fundraising with the launch of WinRed in mid-2019.

There are also some early signs that at least some aspects of the business community will resume donations to at least some of the Republicans who voted to reject the election results. Toyota told E&E News that it was “assessing our future PAC criteria” shortly after the riots at the Capitol. But its corporate PAC has given to many members who voted against the results, according to data compiled by the newsletter Popular Information. JetBlue, which said it was pausing donations, had also restarted donations to some Republican objectors.

And the U.S. Chamber of Commerce signaled in March that it wouldn’t use voting for or against certifying the election as a litmus test.

“We do not believe it is appropriate to judge members of Congress solely based on their votes on the electoral certification,” Ashlee Rich Stephenson, a senior political strategist at the Chamber, wrote in a memo to Chamber members. “There is a meaningful difference between a member of Congress who voted no on the question of certifying the votes of certain states and those who engaged and continue to engage in repeated actions that undermine the legitimacy of our elections and institutions.”

Voting to overthrow the election results and strong fundraising weren’t mutually exclusive, however. Both Reps. Liz Cheney (R-Wyo.) and Adam Kinzinger (R-Ill.) posted seven-figure quarters. Cheney raised more in the quarter than she did for her entire 2018 campaign in her safe red seat, while Kinzinger’s fundraising was almost three times what he raised at the same time in 2019.

“We’re very proud, on the reelect side, of the number of folks that have just stood up and said, ‘We’re with you. We want you back in Congress. We think you will do a great job leading in this kind of moment where we’re very divided,’” Kinzinger told the Chicago Tribune.