TALLAHASSEE, Fla. — Florida Gov. Ron DeSantis on Thursday used a speech to a center-right Texas think tank to air a laundry list of conservative grievances with the media and Big Tech, while framing his own accomplishments for an audience outside of … 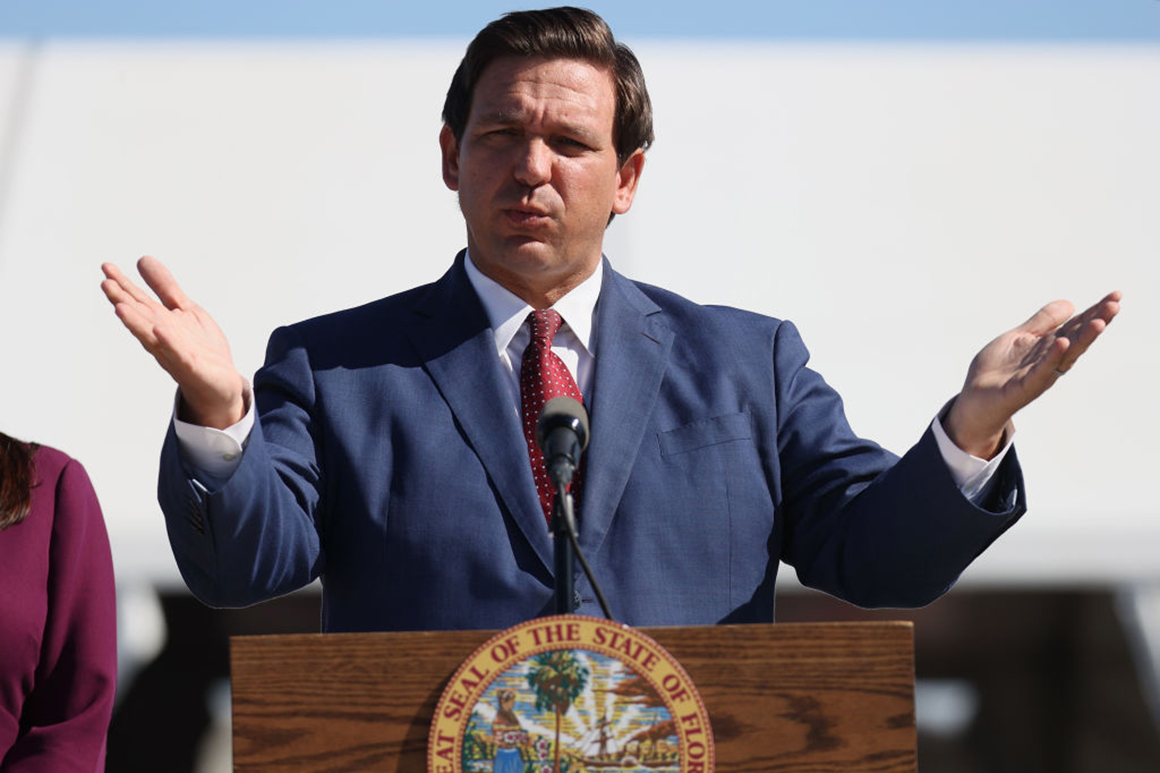 TALLAHASSEE, Fla. — Florida Gov. Ron DeSantis on Thursday used a speech to a center-right Texas think tank to air a laundry list of conservative grievances with the media and Big Tech, while framing his own accomplishments for an audience outside of his home state as positioning for the 2024 presidential race begins.

DeSantis, who last year called the idea of him running for president in 2024 "total garbage," was invited to give the keynote address to a meeting of the conservative Texas Public Policy Foundation. During the nearly 40-minute, in-person speech, DeSantis defended his administration’s handling of the pandemic, rekindled conservative criticism of President-elect Joe Biden’s son, Hunter, and blasted Amazon and other tech giants for “decapitating” Parler, a social network favored by conservatives that's been largely shut down over its refusal to address threats of violence.

The Foundation has gained a foothold in national Republican political circles in recent years. It helped bring a key legal challenge to Obamacare, and several of its top officials were hired to serve in President Donald Trump’s administration. The decision to invite DeSantis is another indication of his growing national profile. DeSantis was a backbench member of Congress before running for governor in 2018, but got a huge spotlight when Trump endorsed him in the primary. He has used the status as one of the president’s favorite governors to boost his national profile.

“What Twitter did to the president … that’s obviously a big deal, and I don’t want to minimize that,” DeSantis said. “But what really bothered me is how they decapitated this company Parler.”

Parler had become a safe space for conservatives either removed from Twitter or who left the site over what they thought was overt censorship. The site has gotten renewed attention after Trump was banned last week from Twitter, and for increased threats of violence by its users in the wake of Capitol riots that left five dead, including a cop.

Parler is arguing in federal court that Amazon Web Services violated antitrust laws by shutting it down, while Amazon says the decision came after Parler declined to remove “content encouraging violence.” In court documents, Amazon’s attorney includes Parler posts that call for “systematically assassinating liberal leaders,” another that calls on shooting “the police who protect these s---tbag senators,” and yet another that says “White people need to ignite their racial identity and rain down suffering and death like hurricane upon zionists.”

DeSantis, whose own communications staff in 2020 wrote Parler complaining about fake accounts that used the governor’s name, says shutting down Parler amounts to the discrimination of “conservative views.”

“We need to really think deeply about if we are a disfavored class based on our principles, based on having conservative views, based on being a Christian, based on whatever you can say that is not favored in Silicon Valley,” DeSantis said.

His criticism of tech companies also extends to what he says is the active downplaying of stories about Hunter Biden in the weeks leading up to the election.

Hunter Biden is under federal investigation for his tax affairs, but the investigation did not get widespread attention until after the November election, a fact that prompted Trump to blast his former Attorney General Bill Barr because he did not amplify the politically explosive investigation sooner and sparked open talk in conservative media about an intentional cover up to help Joe Biden’s bid for president.

“I was very disturbed to see credible articles about Hunter Biden actively suppressed by these Big Tech oligarchs in a way I think absolutely impacted the election,” DeSantis said.

DeSantis said passing laws to protect what he sees as conservative censorship is “probably the most important legislative issue” Florida has headed into the 2021 legislative session.

He did not give any details about how he would take on Big Tech. Florida, like many other states, spends millions annually on contracts with and is invested in publicly traded technology companies. Republican state Rep. Randy Fine last week called on DeSantis and the Florida Cabinet to divest Florida’s more than $150 billion pension plan from tech companies like Apple, Google and Amazon, a move that could run counter to the governor’s fiduciary obligations as a trustee over the state pension.

DeSantis' remarks during the Texas event were hammered by Agriculture Commissioner Nikki Fried, Florida’s only statewide Democrat who is considering challenging DeSantis in 2022. In a statement, she criticized DeSantis’ focus as Florida continues to grapple with the coronavirus pandemic and increased criticism over its vaccine distribution program.

“This governor has overseen a failed pandemic response, a botched COVID-19 vaccine rollout, a broken unemployment system that left out-of-work Floridians waiting months, children and families going hungry, and racial injustice he refuses to acknowledge — and some shut-down app is his ‘most important legislative issue we’ve got to get right?’” Fried said in a statement released through her political committee.

“That makes crystal clear what his priorities are — and it’s not Floridians,” she added.

DeSantis did defend his administration’s response to the virus in his speech, criticizing states that did “lockdowns,” and defending his stance to continue to allow limited-attendance, in-person sporting events and to advocate for continued in-person learning in Florida schools.

“You’re going to see us come out of the gates much quicker than many of these other states that have been mired in lockdowns,” DeSantis said.

DeSantis also defended his approach to vaccine distribution, which included giving frontline health care workers and seniors older than 64 top priority in his Covid-19 vaccine distribution plan. The state inoculated more than 770,000 people as of Thursday, and almost half of them were among the 4.5 million elderly residents who DeSantis wants to offer the vaccine first.

READ:  Grassley puts hold on two Trump nominees until he gets answers on IG firings

The U.S. Centers for Disease Control and Prevention recommended that states push all essential workers to the front of the vaccine line, prompting the Florida Education Association, the labor union for public school employees, to demand priority for teachers too. But DeSantis has remained firm, pointing to data from the state Department of Health showing that 80 percent of the more than 23,000 people who have died from Covid-19 were from the same age bracket he gave top priority. The CDC has since revised its guidelines, recommending those 65 and older be given access to the vaccine, as had been Florida’s policy.

“The media said ‘he does not listen to experts,’” DeSantis said. “Yeah, you’re right, when they are wrong I’m going to reject it, and we are going to do what is right.”

The Trump administration’s Operation Warp Speed has allotted the state 1.6 million doses of the vaccine since the first shipments arrived Dec. 14, but only 45 percent of that stock has been put to use. During a Thursday Florida House committee meeting, Florida Division of Emergency Management Director Jared Moskowitz said the more than 991,000 of Florida’s unused shots are sitting in storage, awaiting orders from the federal government.

Gary Fineout and Arek Sarkissian contributed to this report.