Since the former veep launched his stay-at-home campaign, his lead has grown to double-digits in national polls. 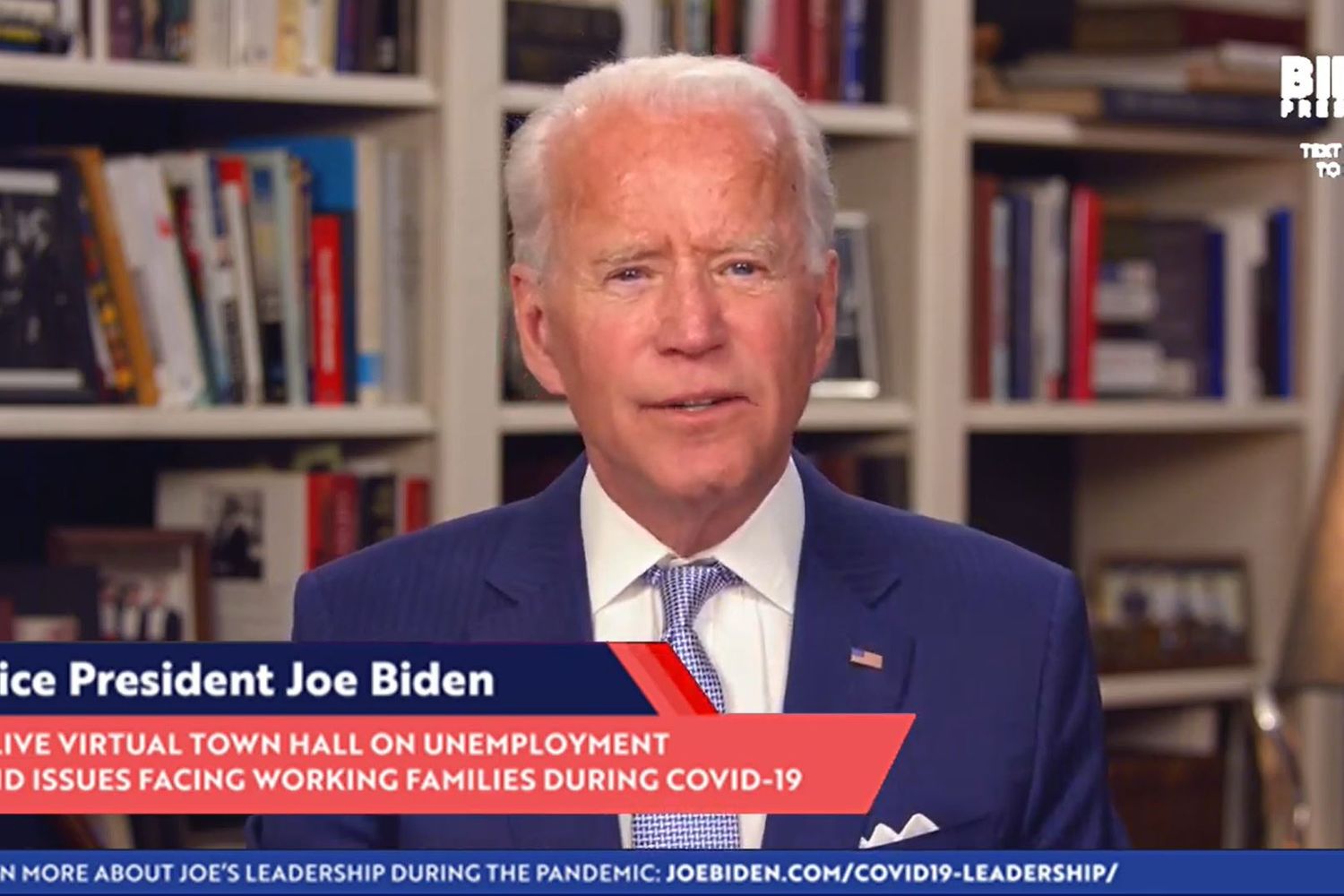 Donald Trump accuses Joe Biden of hiding in a basement ‘sanctuary.’ The president’s campaign issues daily tweets and press releases about the number of days that have elapsed since Biden last held a press conference. Republican allies have taken to referring to the former vice president as “Punxsutawney Joe,” a reference to the Pennsylvania groundhog whose emergence from his burrow is cause for an annual celebration.

Yet none of it has managed to flush Biden far from his Delaware residence — and Democrats are just fine with him being a homebody.

In the three months Biden launched his stay-at-home campaign from his cellar TV studio, his lead has grown to double-digits in national polls while Trump has pin-balled from crisis to crisis. While the president’s approval ratings have suffered under the weight of Trump’s handling of the pandemic, an economic recession and protests over racism and police brutality, Biden just posted his widest lead yet — 14 percentage points, according to a New York Times/Siena poll released Wednesday.

“Trump is running against Trump. And it's smart of Biden to not get in the way of that,” Hilary Rosen, a consulting partner of top Biden adviser Anita Dunn, said in echoing the sentiment in the campaign. “It’s become a referendum on Trump’s behavior.”

Democrats who were once alarmed that Biden needed to do more are suddenly perfectly happy with a schedule that keeps him as close as possible to his Wilmington, Delaware, home most days. Only recently has he begun to make forays beyond his own neighborhood.

First came an appearance at a nearby Memorial Day wreath-laying ceremony. Then, over the past month, he made three socially distant campaign stops in his home state and three more across the border in and around Philadelphia, once the home of his now-disbanded headquarters and the most-important city for Democrats hoping to flip Pennsylvania blue again. In between, Biden flew to Houston for a private event with the family of George Floyd, the black man whose killing under the knee of a white police officer last month led to nationwide protests and galvanized a moment.

On Thursday, Biden will make the short drive to Pennsylvania once again, this time to Lancaster, a county that Trump won handily over Hillary Clinton in 2016, to meet with families who benefited from President Obama’s healthcare overhaul and detail his own proposals to expand access. Travel time? A little over an hour by car.

Biden’s advisers, operating on the principle of not fixing things that aren’t broken, say they have little intention of trying to match Trump in the volume of events he holds or news he produces. They contend that an exhausted electorate wants a return to normalcy and competent governance.

The campaign is betting that Biden’s method of responding to the coronavirus – preaching the need for social-distancing and mask-wearing while talking about unity and empathy— will contrast sharply with Trump, who has refused to wear a mask in public, downplayed the threat of the pandemic’s duration and doesn’t spend much time expressing sympathy for the nearly 122,000 Americans who died from Covid-19.

The contrast was by design and necessity. Since Biden was forced to shelter at home before the March 17 primaries, his advisers have clung to the belief that Trump wouldn’t be able to rise to the moment. They ignored calls to have dueling press conferences refuting the president’s daily briefings. In the end, the strategy of ceding the media spotlight to Trump paid off. After the president mused aloud about whether people could inject bleach to cure themselves of coronavirus, it became clear the White House press briefings were doing more harm to his approval ratings than good and Trump stopped doing them.

During that time, the president missed the opportunity to drive up Biden’s negatives — despite a multi-million ad blitz against Biden — and the presumptive Democratic nominee remains an elusive generic opponent.

“A generic Democrat is automatically perceived to be a viable alternative to the president, with no liabilities, drawbacks, warts, no handicaps,” said top Republican pollster Neil Newhouse said. “Voters haven’t gotten to know Biden any better. And that has been good for Biden.”

Recent polling reflects how wide the gap has grown. In March, when Biden first sheltered in place, polls showed him with a 6-point lead over the president, according to the RealClearPolitics polling average — his advantage was smaller than Hillary Clinton at a similar point in March 2016 after she emerged as the de facto Democratic nominee for president.

Now, three months later, Biden has widened his lead to 10 points — three points better than Clinton’s margin at this point in 2016. Polls also show that Biden’s favorability rating is higher than Clinton.

Biden’s time away from the trail has also proven to be lucrative for his campaign. Democrats have responded by sending tens of millions of dollars to their party and Biden’s campaign, which is suddenly flexing its muscle as a small-dollar juggernaut, raised more money than Trump’s in May.

Over the same period, Biden has shied away from numerous national TV interviews in favor of talking to local press, especially in swing states. The local hits make it harder for Republican groups to monitor Biden on TV and catch the gaffe-prone candidate making a mistake on video, the life blood of a campaign that is intent on portraying the former vice president as feeble-minded and weak.

“There’s no rule in politics that says you have to be omnipresent. In fact, sometimes it’s strategically wiser and more effective to be less visible but more impactful when you are visible,” said Ian Sams, a Democratic consultant who worked on Kamala Harris’ presidential campaign.

Some Democrats worry that in playing it safe Biden is squandering opportunities to attract more millennials and liberal voters by not taking more aggressive positions on issues like police reform.

“I appreciate that Biden has expanded his base. I think it’s mainly because he has played it safe,” said Yasmine Taeb, a Democratic National Committee member from Virginia. “He’s made some public statements in the wake of the protests, but for the most part he’s also taken advantage of the pandemic and he’s laid low.

“That may be working for him now, but the American people, the grassroots, we’re also looking for a bold leader,” she added. “We want someone out there and demanding justice and being as angry and as passionate as the rest of us.”

Still, the need for social distance aligns well with his campaign’s strategy of limiting press access to the candidate. And, unlike in Trump’s case, big rallies were never Biden’s forte anyway.

Trump’s Tulsa speech last week revealed just how difficult it has been for him to attack Biden — when Trump mentioned him, he was booed far less passionately than when Trump attacked liberal Congresswomen Alexandria Ocasio Cortez and Ilhan Omar.

All of it has caused the Trump campaign to heighten their attacks on Biden in an attempt to draw him out. Trump last week began embarking on a media blitz, granting interviews with Washington reporters as the campaign and its allies began accusing the Democrat of ducking the media.

The day before, the campaign said via email that Biden was ducking press conferences “because his handlers are likely terrified of him attempting to answer questions about the economic pain his resistance to reopening is causing.”

Trump’s campaign has also challenged Biden to an extra round of debates. The Biden campaign, however, said it wants Trump to commit first to the three traditional events hosted by the Commission on Presidential Debates.

Doug Herman, a Democratic strategist in Los Angeles, said Biden has time until the convention to ramp up his events and presence on the trail — if he wants. But the more important objective, he said, is for the former vice president to maintain a steady public presence without needlessly taking Trump’s bait.

“Joe Biden is the most personally relatable leader in America today in terms of his ability to empathize with people in pain,” Herman said. “And there’s a lot of economic, racial and health-related pain in this society. “Events that portray his strengths on all three of those issues are really good for the campaign to do.”