The president’s latest global moves have frustrated progressives and moderates alike, from the Israel-Palestine conflict to a Russian gas pipeline. 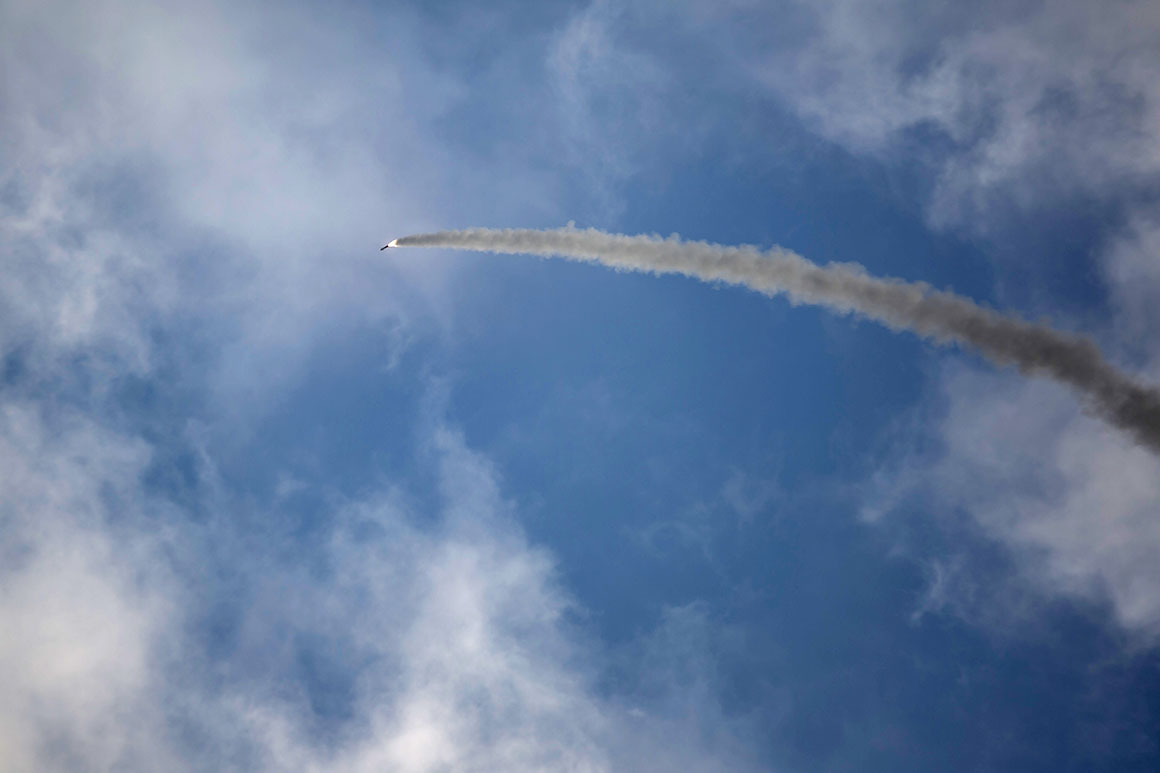 The Biden foreign policy doctrine is taking shape, but Democrats are still figuring out how to live with it.

The president’s latest foreign policy moves have rankled lawmakers on both ends of his party’s ideological spectrum. Progressives and moderates alike are struggling to gain leverage over a commander-in-chief guided by his decades of experience and his long-standing view that leaders should conduct diplomacy out of the public eye.

Over the past week alone, Biden has stayed the course as congressional Democrats urged him to more aggressively and publicly call for a cease-fire in Gaza, where Israeli forces were pummeling Hamas after the Palestinian militant group launched thousands of rockets into Israel. And on Wednesday, in the face of a months-long push by Democrats for sanctions that could rein in Russia’s new multibillion-dollar gas pipeline to Germany, the president handed the GOP a fresh talking point — by waiving those punishments against an ally of Vladimir Putin.

“President Biden will be his own secretary of state,” Senate Foreign Relations Committee Chair Bob Menendez (D-N.J.), who criticized Biden's sanctions waiver, said bluntly. “I can’t define what is the Biden view, but he has a global view. And I think he’s going to call it as he sees it from his experiential factor and his [own] view.”

That doesn’t mean Menendez and other Democrats have to stay quiet — they haven’t been shy about speaking up against their own party's president during a tough week. But unlike Donald Trump, whose breed of global bombast Democrats found far more objectionable but also more malleable, they've acknowledged that their complaints aren’t likely to make a difference with Biden. His years wielding the Senate gavel that Menendez now holds, as well as his vice presidency under Barack Obama, have built Biden a foreign policy identity that’s more written in stone and resistant to shifting political winds.

Democratic lawmakers pressuring Biden over his handling of the conflict in Gaza have more than his legacy to think about, after all; their party is undergoing a real-time reckoning over its historically conditions-free approach to the U.S.-Israel relationship. Lawmakers have pushed Biden to adopt a more aggressive posture toward Israeli Prime Minister Benjamin Netanyahu over his initial resistance to the cease-fire that Netanyahu's government announced late Thursday. A contingent of progressives advancing the Palestinian cause is still pushing to block a new weapons sale to Israel.

“It’s been too little too late. Many of the things that he did … were not helpful,” Rep. Pramila Jayapal (D-Wash.), who chairs the Congressional Progressive Caucus, said of Biden’s response to this month's 11 days of Middle East conflict. “In fact, I think they may have emboldened Netanyahu to continue with even more aggressive attacks.”

Underpinning Democrats' frustration with Biden is their insistence that he do more to break with the Trump administration's Israel policies, which revolved around the then-president’s unwavering support for Netanyahu and his government. Jayapal said Biden hasn’t done enough to diverge from Trump's approach, describing the similarity as “detrimental.”

Biden’s confidants brush off such intraparty criticism, insisting that the president — who was a senator for 36 years and chaired the Foreign Relations Committee before his two terms as vice president — should be trusted to make consequential global decisions.

“When he ran, some on the left derided him as being too seasoned, too centrist, too moderate,” said Sen. Chris Coons (D-Del.), Biden’s closest ally and friend on the Hill.

“In foreign policy in particular, he brought more practical, hands-on experience to the job than any other president in my lifetime,” Coons added of Biden. “I strongly doubt that just a few sharply worded cable TV interviews or resolutions by junior members of the House are going to pressure the president of the United States.”

But liberals insist that they successfully nudged Biden to take a harder line with Netanyahu, pointing to the president's more vocal calls for a cease-fire as the week went on. “I think he’s listening to the statements being made by progressives,” said Rep. Ro Khanna (D-Calif.), who was intensely critical of Biden’s early approach to the shooting war.

Senate Armed Services Chair Jack Reed (D-R.I.) agreed that the outspokenness from congressional Democrats helped the Biden administration as it sought to convince the Israelis to pursue a cessation of hostilities.

“It helped push him, but it also helped give him a much more credible argument with the principals — ‘this is not just my position, this is a growing position in the United States,’” Reed, who supported cease-fire efforts, said in a brief interview.

House Armed Services Chair Adam Smith (D-Wash.) also said Biden has been “responsive” to pressure from Congress. Indeed, the president grew increasingly supportive of a cease-fire in the Middle East — though he never publicly pushed for one — amid lockstep Democratic unity on the matter ahead of the mutual agreement by Hamas and Israel's Security Cabinet.

The cease-fire is expected to take effect in the wee hours of Friday, pausing fighting that killed more than 220 people in Gaza and a dozen in Israel.

While Biden remained quiet publicly about the fighting, the White House released routine readouts of the president’s phone calls with Netanyahu, and Biden’s spokesperson has described the administration’s efforts as “quiet” and “intensive.” Biden’s allies have also thrown shade at Trump, who often practiced diplomacy-by-tweet, and even lawmakers who pushed the president early on for a cease-fire call challenged the idea that his behind-the-scenes work is less effective.

An impassioned Coons insisted that "the most effective way to engage meaningfully with Israel is through private, deliberate, purposeful, instructive conversations. That is what [Biden] has been doing; that is what he is doing."

Top Democrats insist that despite the public criticism aimed at Biden, the party is united on the Israel-Palestine issue. They contend that it's Republicans who have abandoned a realistic two-state solution to the conflict as they hug Netanyahu, embracing counterproductive policies by the Israeli government that were also championed by Trump.

"We're talking about tactics, not policy. Broadly, we’re not having a policy disagreement," Murphy said of his party. "We support, as a party, a Palestinian state. We always have. And we’re talking about the mechanisms by which we effectuate that policy. We’re always going to have tactical disagreements.”

Yet it's not just the Gaza conflict that has Democrats at odds over tactics. The president again angered Democratic lawmakers when his administration decided not to impose mandatory sanctions on the company in charge of the controversial Russia-to-Germany pipeline known as Nord Stream 2. Despite U.S. efforts to stop the pipeline, its construction is entering the home stretch and it’s set to be a massive boon to Putin's government.

The German government supports the pipeline’s completion, and Secretary of State Antony Blinken said that while the U.S. opposes it, Wednesday’s decision was “consistent with the president’s pledge to rebuild relationships with our allies and partners in Europe.”

Menendez warned that the Biden administration's sanctions waiver “has created uncertainty in many corners of Europe.” He and other Democrats are particularly concerned about the impacts on Ukraine, which is facing constant aggression from Moscow.

Despite the public disagreements, Biden’s party is still behind his overarching foreign-policy agenda, such as realigning the U.S. with international organizations and the Paris climate accord. Sen. Jeanne Shaheen (D-N.H.), who spoke out against the pipeline sanctions waiver, in addition to Biden’s planned withdrawal of U.S. troops from Afghanistan, described the majority of fellow Democrats as still in Biden's camp on global affairs.

Even before the outbreak of violence in the Middle East and the sanctions waiver, however, Biden was facing an increasingly confrontational posture from his congressional allies over his foreign-policy decisions.

Biden's Syria strikes decision led to a renewed push to rein in presidential war powers, with Democrats taking the lead and getting some GOP support. As early as next week, the Foreign Relations panel is expected to pass a measure to repeal outdated war authorizations initially adopted in 1991 and 2002.

On that issue, Biden has promised to work with Congress to rein in his own powers — by revamping the 2001 bill that authorized military operations against the terrorists who attacked the U.S. on Sept. 11.