The taxpayer-funded outlet is grappling with the fallout from a video post deemed too favorable the former Vice President, setting off recriminations and suspicion amid a shakeup. 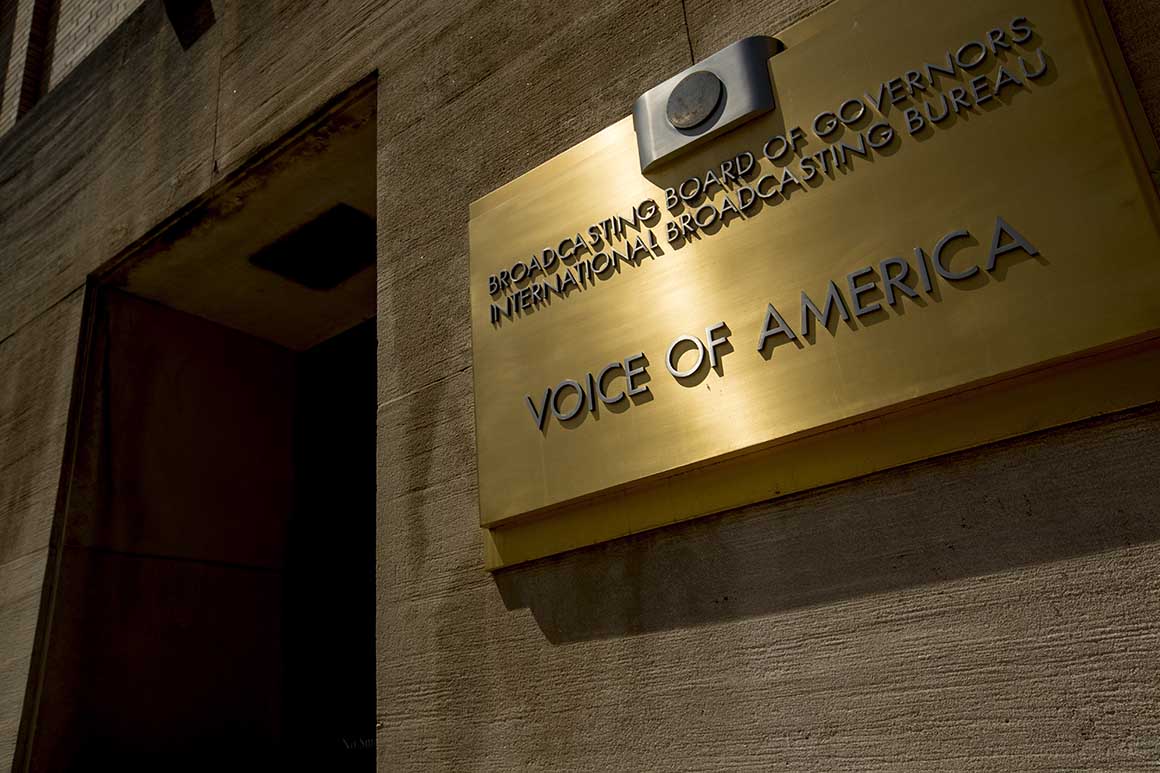 Voice of America is weighing a suspension of four contractors who were involved in publishing a story and video that was deemed too favorable to Joe Biden’s presidential campaign, according to two people familiar with the matter.

On July 22, VOA’s Urdu service, which is targeted to Urdu-speaking audiences in Pakistan, India and around the world, posted content on its website, Facebook, Twitter and Instagram pages about an online event Biden did reaching out to Muslim-Americans as he urged them to vote for him in November. Top VOA officials, reviewing the material after red flags were raised about it externally, found it violated the network’s editorial policies and ordered it taken down.

In the two-minute video, subtitled in Urdu and overlaid with music, Biden says: “Your voice is your vote, your vote is your voice. Muslim Americans’ voices matter. I’ll be a president that seeks out and incorporates and listens to the ideas and concerns of Muslim Americans on everyday issues that matter most to our communities. That will include having Muslim American voices as part of my administration.”

The footage, which also includes a brief shot of Rep. Rashida Tlaib (D-Mich.), was clipped liberally from the livestream of Emgage Action’s Million Muslim Votes virtual conference earlier this month, for which Biden provided a video. Emgage Action is a left-leaning 501c(4) group that has endorsed Biden and “seeks to mobilize American Muslims to advocate for issues that define who American Muslims are by what they stand for,” according to its website.

One of those clips included audio from a voice-over narrator. “Make no mistake people, 2020 is our year. Let’s dive into it with 20/20 vision,” the narrator says in the video. “We can see clearly that America is fighting for its very soul.”

The discussions over the fate of the contractors comes amid a politically charged overhaul of taxpayer-funded media outlets, including VOA. Their suspension would represent a less severe punishment than what VOA’s new leadership had first contemplated, according to the two people: immediate termination.

Bill Baum, a longtime VOA veteran and current senior adviser to the acting director, told colleagues earlier this week that VOA wanted to terminate their contracts immediately because the story resembled a campaign ad, was not balanced and violated VOA’s journalism standards.

But after the general counsel from VOA’s parent organization, the U.S. Agency for Global Media, recommended that VOA merely suspend the four contractors, instead of firing them, they may end up keeping their jobs after all. The contractors likely will be provided a chance to explain why they shouldn’t be fired, according to a person familiar with the internal discussions.

In a statement, a VOA spokesperson, Bridget Serchak, said: “VOA leadership is conducting a full review of the circumstances surrounding the matter. Corrective actions will be taken, once all of the facts of the matter have been collected and thoroughly evaluated.”

President Donald Trump and his allies have complained vociferously about the tone of VOA’s coverage -- including an unusual blast in a White House newsletter. In the case of the Biden video, people outside of USAGM had flagged it to the new CEO, Michael Pack, and raised concerns about the content, according to the person.

The video also attracted the attention of conservative journalist Sara Carter, who wrote a story on Monday with the headline: “Voice Of America Promoted A Pro-Biden Muslim Political Campaign Ad, Then Removed It.” She quoted House Freedom Caucus chairman Rep. Andy Biggs (R-Ariz.) calling it “outrageous that VOA … used its platform to campaign for Biden” and demanding an investigation.

Pack, a Steve Bannon ally, fired the heads of Radio Free Europe/Radio Liberty, Radio Free Asia, and other outlets as he started as CEO of the taxpayer-funded media group, moves that drew criticism from members of both parties in Congress. Amanda Bennett, the head of VOA at the time, resigned on his first day in the job.

A veteran documentary filmmaker, Pack has defended the shakeup as necessary to help him reform the organization to align more clearly with its original mission.

But there are deep suspicions of Pack’s true motives within USAGM and among its supporters on Capitol Hill.

“Unfortunately he’s trying to find one incident and examples he can show that he is improving the content,” one of the people said of Pack. (A USAGM official said that VOA’s language services have long been “scrutinized for failing to meet journalistic standards and principles” and not adhering to VOA’s charter.)

The scrutiny of the Biden video has drawn top VOA officials into close handling of the matter. Officials in the outlet’s front office have told colleagues the Urdu video should have corrected Biden when he referred to the “Muslim ban” by saying President Trump’s 2017 immigration action didn’t ban all Muslims from entering the U.S., but only selected Muslim-majority countries, according to a person familiar with the internal discussions. The video also should have noted that the Trump campaign is doing its own outreach to Muslim voters and that some Muslim organizations support Trump’s reelection, they said.

Top USAGM officials have demanded to know the names of everyone who was involved in the story and asked to interview them, according to one person familiar with the exchanges.

READ:  DeVos out of sight even as her signature school issue gets top billing at RNC

On Tuesday, the acting director of VOA, Elez Biberaj, held multiple meetings with Pack’s front office and was asked by the deputy chief of staff, Diane Cullo, for the names of the journalists involved in putting out the story and the full translation of the piece, according to two people familiar with the matter. VOA shared that information with USAGM and promised to improve the editorial process to prevent this type of episode from happening again. Biberaj also proposed disciplinary action against other people involved.

“It seems as if the CEO’s office is extremely interested in getting from the other side of the firewall into VOA’s activities,” the person familiar with the internal discussions said. The source could not recall VOA ever considering firing people based upon one story being imbalanced, and without a track record of poor performance.

“This just seems to be so fast and so out of the ordinary,” said the person, who called it a “witch hunt.”