NEW YORK — Mayor Bill de Blasio returned to a staunch defense of the NYPD on Thursday amid outcry over police officers using force to disperse peaceful protesters and Gov. Andrew Cuomo emphatically backed the response as well, days after accusing the… 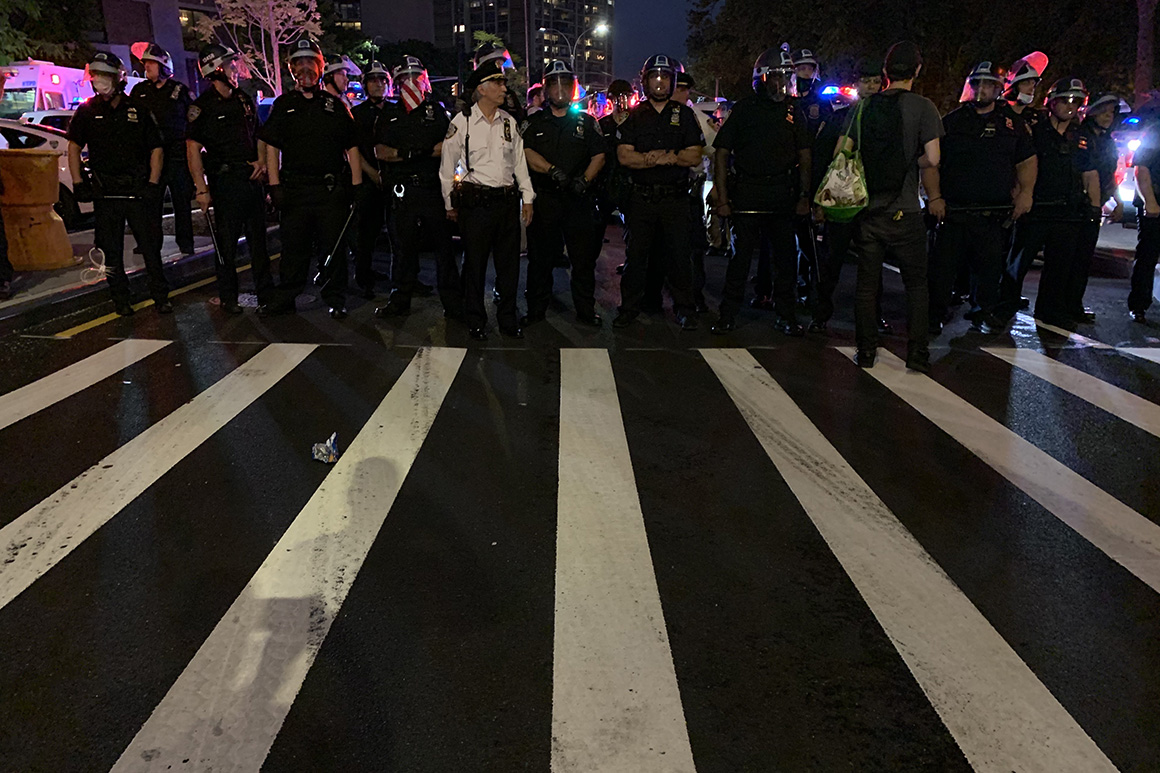 NEW YORK — Mayor Bill de Blasio returned to a staunch defense of the NYPD on Thursday amid outcry over police officers using force to disperse peaceful protesters and Gov. Andrew Cuomo emphatically backed the response as well, days after accusing the NYPD of failing to do its job and stop looting.

The mayor delivered his verdict even as he acknowledged he had not seen viral videos of police using batons and wrestling with protesters who were on the streets past the city's 8 p.m. curfew which will remain in place through Sunday night.

“I have not seen the videos you refer to or seen those accounts,” he said. “If there’s anything that’s a concern, a problem, anything questionable, anything inappropriate it will be followed up against immediately.”

But de Blasio insisted the NYPD was not like other police forces that have used “a very heavy handed overreach strategy for dealing with protests.”

“The NYPD takes a very different approach —  uses as light a touch as possible. Tries to defuse. Not perfectly, we understand that, but it is the approach of the NYPD consistently,” he said.

The police response has drawn criticism from elected officials, demonstrators, and former aides to the mayor.

Wednesday evening in downtown Brooklyn, a group of several hundred protesters marched through the streets chanting and holding signs, before running into an NYPD cordon at dusk near Cadman Plaza.

Officers outfitted with batons, helmets and shields amassed and advanced on the crowd, marching as a phalanx while shouting and shoving demonstrators, some of whom fell to the ground, tripped over curbs and broke into a run during their retreat.

The incident was witnessed by Public Advocate Jumaane Williams, who expressed outrage over the rough tactics, and said the mayor and governor were not doing enough to address the root causes of hostility toward the NYPD.

“The same energy you use in discussing the protection of property, just keep it when discussing what you are going to do right now — not tomorrow or the day after — right now to address the pain and anguish of black New Yorkers,” Williams told reporters Thursday morning.

“I strongly condemn the unnerving violence we saw from the NYPD last night. The protestors were nonviolent. There was no reason to instigate,” City Council Speaker Corey Johnson said in a tweet.

City Comptroller Scott Stringer added: “The penalty for protesting after curfew is not to be beaten senseless by the police. That @NYCMayor has not seen these videos is not just ignorance, it’s a total disgrace.”

The mayor, who initially backed the NYPD’s handling of protests that broke out over the weekend, took a tougher tone against officers accused of misconduct earlier this week. But by Thursday, he was again standing behind the NYPD.

Monday night saw widespread looting in the city, which police were largely successful in preventing by Wednesday night with an 8 p.m. curfew in place.

De Blasio did not provide firm guidelines on how the curfew would be enforced — saying peaceful crowds would be given “extra leeway” to continue marching after 8 p.m., but the NYPD would use its discretion to break up crowds at the time it deems appropriate.

“Protest. Go home at curfew. If you stay out, OK. But do not even think about doing anything violent. And there’s a point at which enough is enough and it’s time to go home,” he said.

“How can protesters follow the rules if they don’t know the rules?” Staten Island Rep. Max Rose said in a tweet. “Asking for a city. #FailedLeadership.”

De Blasio said he did not understand why there was confusion: “I think it’s clear as a bell."

At an Albany press conference, Cuomo said he did not believe the police used excessive force.

"If somebody's standing there and they just walked up and hit somebody with a baton, that's wrong. But I don't believe that's what happened,” he said. “Police bludgeon peaceful protesters with batons for no reason? That’s not a fact. They don’t do that. Anyone who did do that would be obviously reprehensible if not criminal.”

Multiple videos surfaced Wednesday night as police whacked protesters on bikes with batons and threw demonstrators to the ground.

Cuomo said cops were right to force crowds to disperse.

Both leaders condemned a random stabbing attack on a police officer in Brooklyn. A man walked up to an officer on an anti-looting patrol and stabbed him in the neck, authorities said. The assailant’s motive is not clear.

In the ensuing struggle, two other police officers were shot in the hand and the suspect was shot as well.

READ:  Bloomberg, others rack up $20M to register Florida felons after time served

“They came under unprovoked attack, and that is absolutely unacceptable. An attack on any one of our officers is an attack on all of us,” de Blasio said.

The mayor announced that $500,000 in grants from the Mayor’s Fund will be available to Bronx business owners whose stores were damaged in looting earlier this week.

Businesses will be eligible for up to $10,000 each to help with repairs, locks and security upgrades.

“Here’s an impoverished community, here’s a community that has fought back from the horrors of the 1970s and 80s in the Bronx — got back on its feet, built community businesses,” de Blasio said. “They did not want to lose that progress, slip backwards, have businesses fail.”