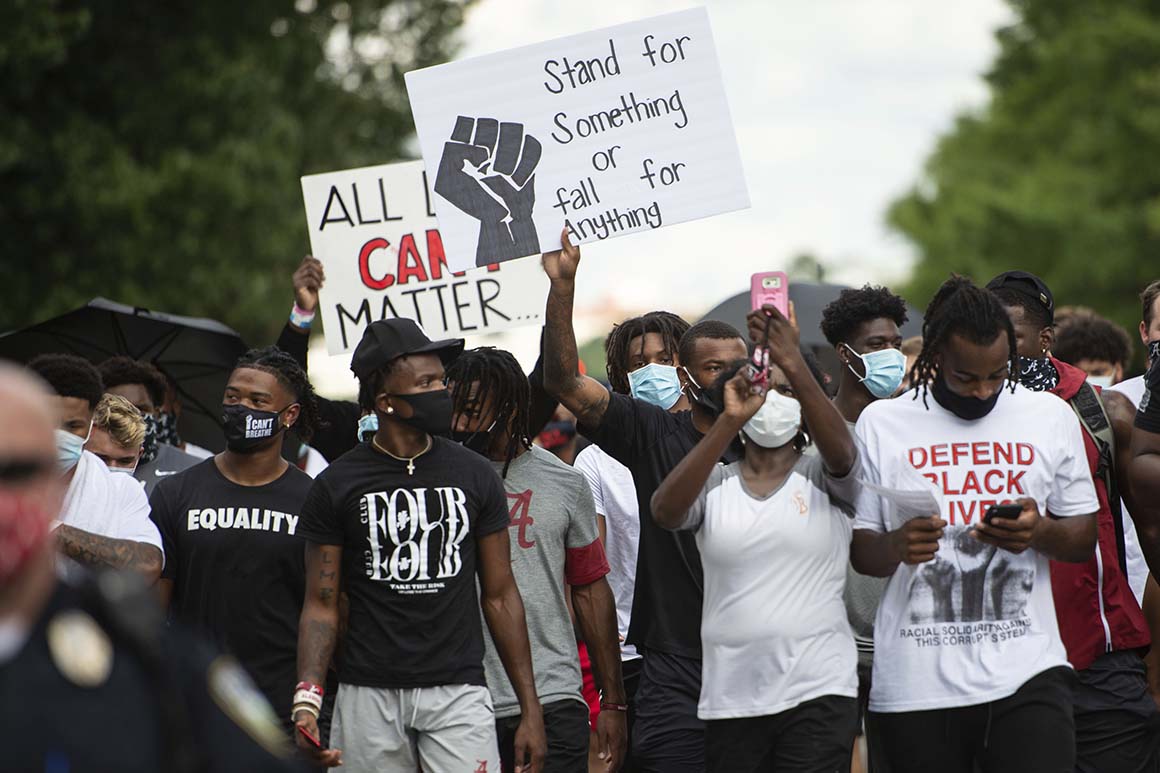 A federal judge in Alabama has upheld the constitutionality of a half-century-old federal anti-riot law in the face of claims that the law has racist roots and threatens protest activity protected by the First Amendment.

U.S. District Court Judge Terry Moorer's decision Thursday afternoon in favor of prosecutors clears the way for Tia Pugh, 22, to face trial next week on a single felony charge: that she violated the "civil disorder" law by smashing a police car window with a bat during a protest in Mobile six days after a Black man, George Floyd, died in the custody of Minneapolis police.

Lawyers for Pugh challenged the statute on various legal grounds and noted that the provision under which Pugh was charged was termed the "Civil Obedience Act" in what appeared to be a dig at Rev. Martin Luther King Jr. and others advocating civil disobedience during the civil rights movement of the 1960s. The motion to dismiss the case was part of what the government termed a coordinated effort by defense attorneys to take aim at the law in cases across the country where it is being wielded against people accused of violence during last year's racial justice protests.

However, Moorer — who was President Donald Trump's first Black appointee to the federal bench — said the law is constitutionally sound. And in rejecting Pugh's claims of selective prosecution and racial bias, he noted that while the statute has rarely been used in the past few decades, it is now being used in dozens of cases related to the storming of the Capitol in January.

"While [civil disorder law] prosecutions may not be common, it is clearly being applied now to a variety of persons — between the few cases that stemmed from the George Floyd protests that turned into civil disorder and more recently the cases asserted against some participants in the events on January 6, 2021 at the U.S. Capitol. Each of the ... prosecutions that arose from those protests encompass individuals of a variety of races and genders with extremely different ideology," the judge wrote.

Moorer's 24-page opinion also turned down a defense argument that the law doesn't square up to federalism principles in the Constitution because it fails to require a sufficiently substantial connection between interstate commerce and the "civil disorder" that is a prerequisite for the federal felony charge.

Still, Pugh will be able to raise a version of that argument at her trial, by contending that there is a lack of evidence that the protest she took part in actually disrupted commerce. Prosecutors have said police closed an off-ramp from the interstate during the demonstration and that trucks with hazardous cargoes were told to detour. It is unclear, however, if any actually did.

Pugh's lead attorney, Gordon Armstrong, called the ruling "disappointing," but added that a ruling in favor of the defense on such issues was more likely to come from an appellate panel than from a trial judge.

"Now, we turn to the trial and don't look back," the defense attorney said.

The case against Pugh appears likely to become the first to go to trial out of a wave of such cases filed by federal prosecutors across the country after Trump and Attorney General Bill Barr called for a federal crackdown and faulted local prosecutors in many jurisdictions for failing to charge demonstrators who got violent. A handful of the federal cases have ended in guilty pleas, but more appear to have been dropped or put on ice in deals that call for the cases to be dropped if defendants stay out of trouble for a set period of time.

Pugh faces up to five years in prison if convicted on the federal felony charge, although defendants are usually sentenced in accordance with federal sentencing guidelines that typically call for much shorter sentences for offenders with little or no criminal record.

In Pugh's case, the U.S. Attorney in Mobile filed the federal charge against her just five days after the incident. Pugh had already been arrested by Mobile police on charges of inciting a riot and criminal mischief.

Last month, the Justice Department sent a prosecutor from its headquarters in Washington to Mobile to defend the civil disorder statute. No court has struck it down, but only one federal appeals court has upheld it: the St. Louis-based 8th Circuit in a case involving two men convicted of throwing cherry bombs at firefighters as they tried to extinguish a blaze at the Air Force ROTC building on the Washington University campus.

A conviction of Pugh, followed by an appeal, would allow the Justice Department to seek another vote of confidence for the law from the Atlanta-based 11th Circuit. It is considered one of the nation's most conservative federal appeals courts.

The only argument against the statute that seems to have a decent chance of resonating with conservative judges is the claim that the link the law requires to interstate commerce is too weak. However, a win on those grounds is unlikely to affect the use of the law in the Capitol riot cases because they rely on separate language in the statute that covers interference with a "federally-protected function," regardless of any impact on commerce.

READ:  Harris: Immigration efforts designed to 'give people some sense of hope'