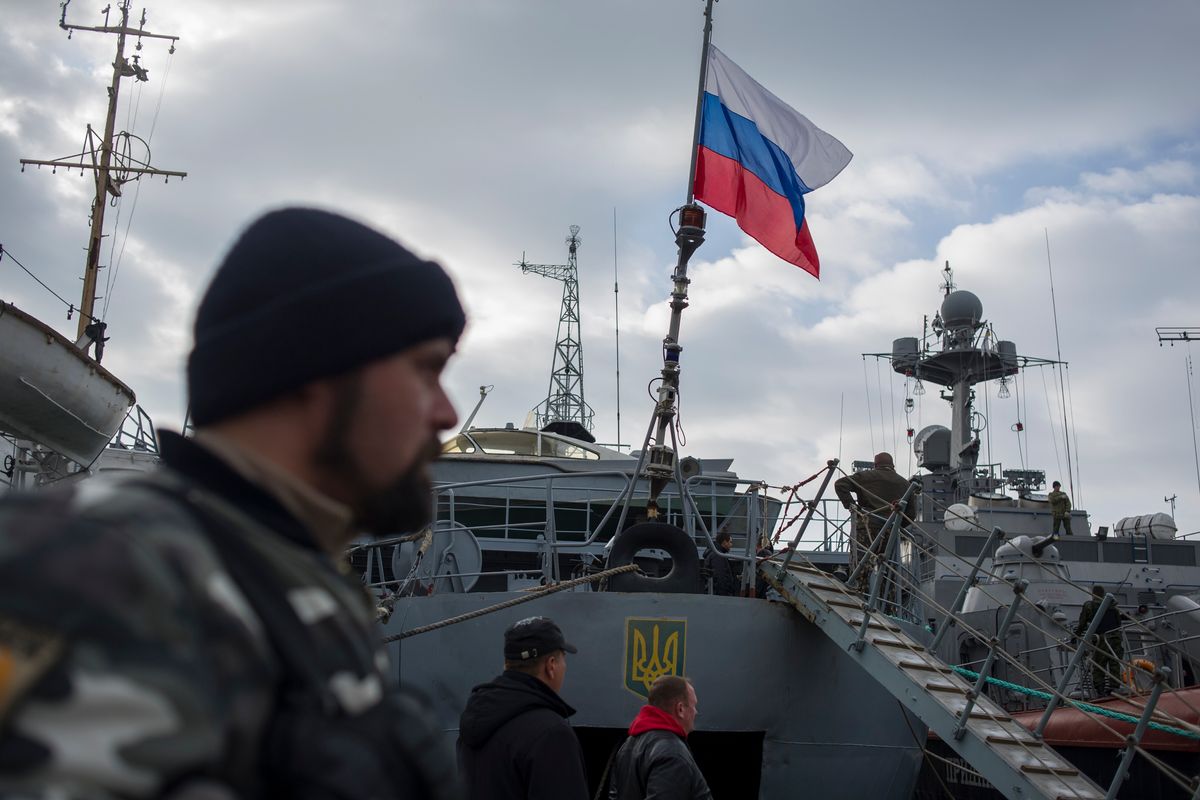 A trained KGB agent, Vladimir Putin knows how to hide his feelings, but in 2013, after former President Barack Obama described him looking like “the bored kid in the back of the classroom,” Putin let it be known that he was furious. And rightly so: kids in the back of the room are rarely ambitious. Putin, from day one of his rule 21 years ago, has had big, ambitious plans for himself and for Russia.

A far greater Soviet patriot than a Russian one, one of his first priorities when he became president in 2000 was to recover state ownership or control of the key political and economic assets lost in the Soviet Union’s demise: major industries, courts, media, national politics. Then, in his third and fourth presidencies, he turned his ambition to geopolitics: to incursions into Ukraine and Crimea, an alliance with Syria, and various assaults on Western democracies with what the KGB used to call “active measures” recast as cyberattacks.

Now, on the seventh anniversary of the Crimean Anschluss, many of the same vectors that produced the invasion of Ukraine are here again. Anticipating their trajectory and formulating a plan ought to be among the Biden administration’s main concerns.

There are at least two reasons for Putin to be thinking about similar big and bold actions today. One is strategic and abiding: glory for himself and his Russia, the two by now entwined in his mind. The other motive is tactical: He is working toward a lifetime presidency—a six-year term in 2024, at 72, and perhaps another in 2030— in a country where the economy and incomes have stagnated for over a decade and the still-raging Covid-19 pandemic has left deep scars. What’s more, the arrest of pro-democracy leader Alexei Navalny has ignited waves of protest rallies in over 100 Russian cities for the first time since anti-Putin demonstrations in the winter of 2011-12.

The same factors—deeply held beliefs and perceptions, bleak economic prospects, and the exigencies of his regime’s survival—overlapped in 2012 and 2013. In the most fateful choice of his political life, Putin used the “return” of Crimea to replace economic progress and income growth as the keystone of his popularity, and thus his regime’s legitimacy. It was a bold and brilliant political maneuver. Lev Gudkov, the director of Russia’s only independent polling firm, Levada Center, has called Putin’s new claim to legitimacy “patriotic mobilization.” Another leading Russian political sociologist, Igor Klyamkin, labeled this choice “militarized patriotism in peacetime.”

And it worked. Putin’s monthly approval rating catapulted from an average of 65 percent in 2012 and 2013 to 81 percent from 2014 to 2018. Russian experts called it the “Crimean consensus” — an “emotional upswing” resulting in the “consent of the Russians to bear privations in exchange for imperial grandeur.”

We tend to repeat what worked. Political scientists call it “path-dependence.” Finding himself now in what could be a tighter bind, politically and economically, than in 2012-13 and with the “Crimean consensus” eroding, Putin may reach for that which has done very well by him in the past: short victorious wars.

Virtually unknown when he was appointed prime minister in August 1999, Putin’s approval shot up to around 80 percent in the first months of 2000 after he launched what became Russia’s second war in Chechnya. His highest rating ever—88 percent in September 2008 —followed a five-day war against Georgia. (At the time, he was technically prime minister, having installed Dmitri Medvedev as a placeholder president, but everyone knew who was calling the shots.) “The public interpretation was: This is the beginning of World War III and we are winning,” commented Levada principal Alexei Levinson. “It does not matter what exactly we have conquered. The most important thing is we have shown THEM!”

Should Putin want to launch another short, victorious war, there is no shortage of potential targets. At least five neighboring countries are obvious candidates. Three of them—Georgia, Moldova and Ukraine—are the sites of “frozen conflicts” that can be easily thawed by Russian troops or their proxies inside those countries or on their borders. Another, Belarus, is half of a formal “Union State” with Russia. The fifth, Kazakhstan, has more ethnic Russians—3.5 million—than any post-Soviet state except Ukraine, with most conveniently living in the six northern provinces that border Russia. Once the Taliban takes over Afghanistan and starts expanding into the Central Asian states, an Anschluss could be portrayed as the “defense” of Kazakhstan’s ethnic Russians.

But these five potential wars would not quite measure up to Putin’s ambition for “big ideas,” or to his self-imposed mission to restore and avenge.

That criteria would be met by a fast and victorious poke at NATO’s eastern flank, the member states of Estonia, Latvia and Lithuania. Could there be a more satisfying coda to Putin’s desire to recover past glory, a more condign retribution for the fall of the beloved Soviet motherland, than a feat that even the mighty Soviet Union could not pull off? A victory over the alliance that embodies the democratic West’s solidarity and its will to defend itself? A be-all and end-all roll of the dice that would expose NATO as a paper tiger?

All the key public perceptions that shaped the “Crimean consensus”—the plain and lean definition of victory, the aid to oppressed and abused ethnic Russian compatriots, the defense of the motherland and the target countries’ place in the national consciousness—would coalesce organically, almost effortlessly.

Although Putin has bragged of getting to Riga and Tallinn in two days, an imperial Reconquista is unlikely. No tanks would need to roll into Riga or Tallinn. Instead, Russia could conduct a tight, Crimea-style “hybrid” operation by mostly special ops forces and elite paratroopers drawn from Russia’s Western Military District: three special forces regiments and the air assault division currently deployed close to the Estonian and Latvian borders. A cross-border assault’s most likely targets include Estonia’s Idu-Viru County, which is 74 percent ethnic Russian, and its largest city, Narva (83 percent), and Latvia’s Latgale region (36 percent Russian) and the city of Daugavpils (48 percent). After one or both of them have been “reunited” with the motherland, recovering them would mean a war with Russia.

Gen. John Nicholson, former commander of U.S. and NATO troops in Afghanistan, estimated that it would take NATO approximately 90 days to mobilize and build up a conventional force in the Baltics that outnumbers the Russians. By contrast, it took just three weeks from the invasion of Crimea to the “referendum” and “acceptance” of Crimea into the Russian Federation—Putin’s euphemisms for the annexation.

Both Brussels and Moscow know that the Baltics are indefensible in the short run. Russia enjoys an “absolute supremacy” in offensive equipment—tanks, fighter aircraft and rocket artillery—the Estonian Foreign Intelligence Service concluded in a recent report. In the wake of the Crimean operation, NATO sent three battalion-sized “battlegroups” to the Baltics to embody Article 5 of the NATO Charter: an attack on one member of the alliance is an attack on all. Known as the “Enhanced Forward Presence,” they are a tripwire.

READ:  How Trump's hard line against immigration could hurt him in Florida

Yet a tripwire is effective only in so far as the tripper believes that touching it would cause an explosion, and there are good reasons to suspect that to Putin, the tripwire looks disconnected from the powder keg. The French president has publicly called NATO brain-dead and doubted America’s capability to “activate solidarity” under Article 5 “if something happens at our borders.” A few months later, a report by the top-level Munich Security Conference was titled “Westlessness?”and went on to lament the loss of “a common understanding of what it means to be part of the West.” For the first time in NATO’s 71 years, the paper broached the prospect of the alliance’s disbanding. When asked if their country should come to the assistance of “our NATO ally” if Russia “got into a serious military conflict” with it, majorities in half of the countries polled said no, including France, Spain, Germany and Italy. In the last three, the “nos” led by more than a 2-to-1 margin.

Of course, Putin’s image of the West may well be incomplete and impermanent. In the longer run and on truly important issues, democracies are informed by public opinion, which may change foreign policies, often quickly and radically. But Putin’s perception is not likely to change. Validated by the steady stream of data skewed to please the boss, after 21 years at the top, the memories of past victories have likely spawned an unshakable belief in his genius and never-changing luck—and become proof of the ultimate moral faultlessness of his choices.

And then there is Putin’s largest built-in advantage over democracies: Above all, they want peace. He needs victory.

Big ideas beckon, solemn dreams enchant, a place in history awaits. And more than at any time since he’s been in the Kremlin, Vladimir Putin may be looking for a triumph.