He left his stamp on the nation’s political debate for decades. 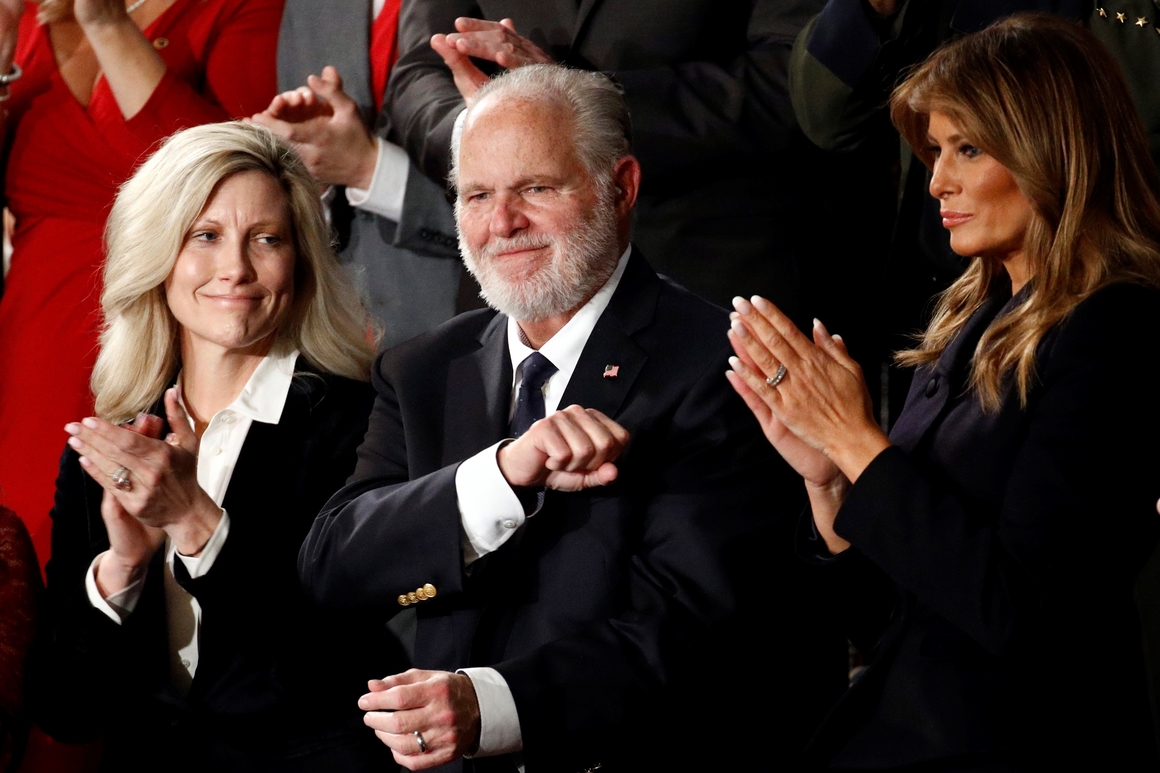 Rush Limbaugh, a scathing conservative voice who made himself into a powerhouse political figure on talk radio for the past three decades, died on Wednesday. He was 70 years old.

Kathryn Rogers, the longtime radio host's wife, announced her husband's death at the beginning of his show on Wednesday. The cause of death was complications from lung cancer, she said.

"As so many of you know, losing a loved one is terribly difficult, even more so when that loved one is larger than life. Rush will forever be the greatest of all time," Rogers said. "Rush was an extraordinary man. A gentle giant. A brilliant, quick-witted, genuinely kind, extremely generous, passionate, courageous and the hardest-working man I know. Despite being one of the most recognized, powerful people in the world, Rush never let the success change his core or beliefs. He was polite and respectful to everyone he met."

Limbaugh disclosed last February that he had been diagnosed with lung cancer. One day after that disclosure, then-President Donald Trump surprised Limbaugh by awarding him a Presidential Medal of Freedom at the State of the Union address. “He is the greatest fighter and winner that you will ever meet,” said Trump, whose caustic style on Twitter seemed to owe something to Limbaugh’s on-air outbursts.

As talk radio was transformed after the repeal of the Fairness Doctrine in 1987, no figure made better use of it than Limbaugh, building an audience of millions that tuned in daily. Relentlessly, he sold a conservative viewpoint with braggadocio, complete with name-calling and insults. In doing so, he earned the enmity of millions of Americans who found him incendiary, ridiculous or just plain mean.

Limbaugh became a national radio figure in 1988 and soon extended his brand with best-selling books, speaking appearances, and a syndicated TV show in the 1990s. “With talent on loan from God, this is Rush Limbaugh,” he would say as he introduced himself. His loyal followers called themselves “Dittoheads,” to indicate they agreed with everything he said, without even needing to think his statements through.

“I know the liberals call you the most dangerous man in America, but don’t worry about it. They used to say the same thing about me. Keep up the good work,” former President Ronald Reagan wrote to him in 1992.

For decades, Limbaugh offered himself up as the holy terror of American conservatism, condemning liberalism day after day. He was particularly influential during the presidencies of Bill Clinton and Barack Obama, both of whom he treated with undisguised loathing. His rhetoric during the 1994 election has been credited with helping sell Newt Gingrich’s Contract With America to the nation, and thereby lifting Republicans to majorities in the House and Senate. And if Republicans were in power and he didn’t like how they were using it, Limbaugh would attempt to redirect their aim.

To the left, Limbaugh was the ultimate bogeyman, derided as racist and sexist and homophobic and cruel, a time bomb of tastelessness. “He has discovered that he possesses the uniquely treasured modern gift of saying exactly the worst possible thing,” Alexandra Petri wrote in The Washington Post in 2012. “Once, we pilloried people for this. Occasionally, we fed them to lions. Now we give them their own talk shows.”

Others portrayed him as a smart opportunist who used his political exhortations to build an infotainment empire. “The most elemental fact about the Limbaugh career might be that, outside of seriously corrupt dictatorships, nobody has made as much money from politics as Rush Limbaugh,” Michael Wolff wrote in Vanity Fair in 2009.

Wolff added: “The extraordinary thing Rush has done, something arguably never before accomplished in the history of the co-dependent relationship of media and politics, is manage to keep his media day job while assuming something rather close to direct political power. Every other entertainer who has discovered a political mission — from Ronald Reagan to Sonny Bono to Al Franken — has had to quit show business and run for office. Not Rush.” 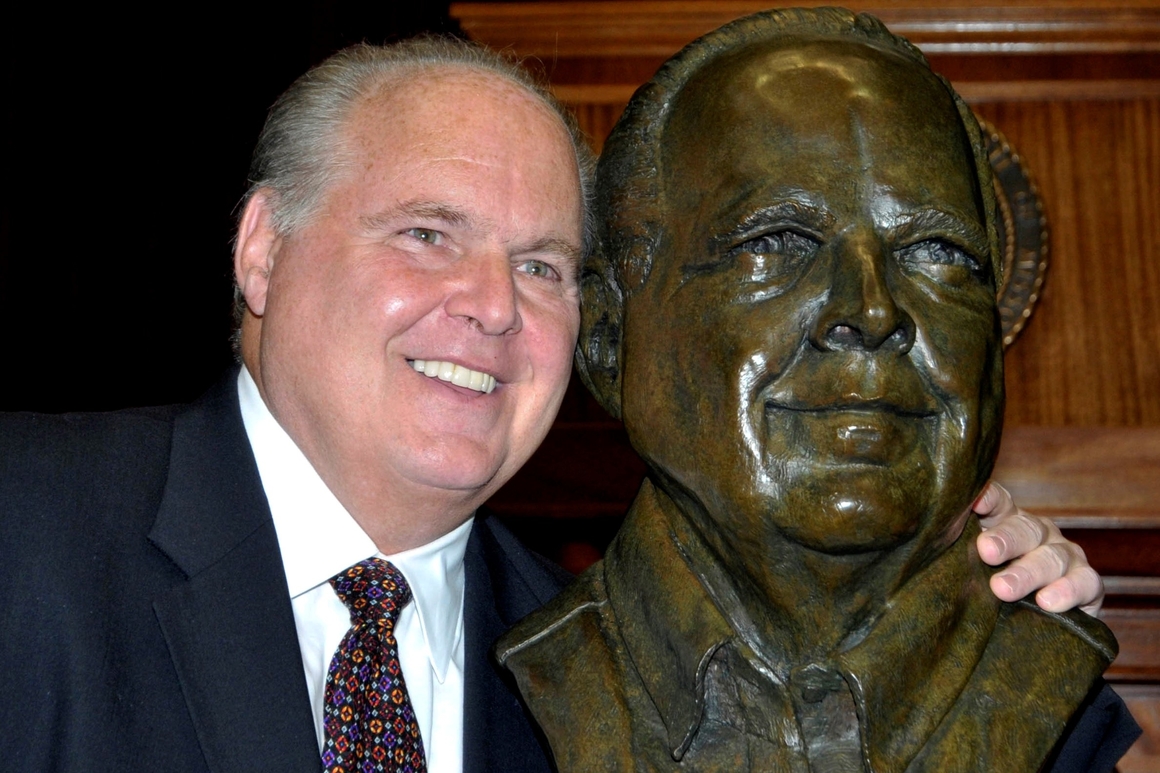 Rush Hudson Limbaugh III was born in Cape Girardeau, Mo., on Jan. 12, 1951. His father was a lawyer and there were a number of other lawyers in his family, including his grandfather, who practiced law until the age of 102. Rush veered off that path. His academic career was something of a dead end — he dropped out of Southeast Missouri State — but he did have his first radio show in high school, under the name of Rusty Sharpe.

His early years in radio saw him moving from station to station, such as a DJ stint at “solid rockin’ gold“ WIXZ in McKeesport, Pa. At one point, he worked for the Kansas City Royals, and years later would unsuccessfully attempt to help Royals legend George Brett buy the team.

In 1984, he landed in Sacramento, Calif., and started to build a following. Limbaugh — and others inclined to talk politics on the air — got help in 1987 when Reagan’s Federal Communications Commission ended the Fairness Doctrine, which required stations to give equal time to competing viewpoints. “Ronald Reagan tore down this wall in 1987 (maybe as spring training for Berlin) and Rush Limbaugh was the first man to proclaim himself liberated from the East Germany of liberal media domination,” Daniel Henninger wrote in The Wall Street Journal in 2005.

His show was syndicated nationally in 1988. New satellite technology made it easy and relatively inexpensive for his program to be sent to many stations. “Limbaugh was an almost instant phenomenon, filling the midday slot on talk stations that blossomed across the AM band in the late 1980s and early ’90s,” wrote Marc Fisher in his book “Something in the Air.” “He made local station owners happy with his blend of controversy, showmanship and sales skills.”

In his new perch, Limbaugh had no qualms about being outrageous or offensive. A collection of his “hits” from the 1990s would include the following: “Have you ever noticed how all composite pictures of wanted criminals resemble Jesse Jackson?” And: “The most beautiful thing about a tree is what you do with it after you cut it down.” And: “Feminism was established as to allow unattractive women easier access to the mainstream of society.”

He branded feminists as “feminazis,” joked about people dying from AIDS, and did sounds meant to simulate on-air abortions.

“In Limbaugh’s comedy-commentary, the disadvantaged are just subjects for scorn, and anyone who thinks to help such people are saps,” David Remnick wrote in 1994.

Regardless, Limbaugh’s show kept getting picked up by more and more stations. In 1992, he launched a syndicated TV show, as well, and his book, “The Way Things Ought to Be,” was a huge best seller. All but his most ardent foes acknowledged he was a skilled raconteur; his mastery of the medium earned him a spot in the Radio Hall of Fame in 1993. A Dittoheads singles group in California was said to be “lookin’ for love in all the right places.”

The growth in his audience coincided with the growth in influence of Gingrich, a Georgia congressman who had no qualms about abandoning civil discourse in the name of electoral success. In 1994, Republicans captured the House, elevating Gingrich to speaker and making Limbaugh the new majority’s unofficial top cheerleader. Through the decade, Limbaugh made himself a thorn in the side of Clinton. “Bill Clinton may be the most effective practitioner of class warfare since Lenin,” he pronounced at one point.

Sometimes Limbaugh left the cocoon of his loyal audience and things backfired. ESPN hired him to do football commentary in 2003, an experiment that ended quickly and awkwardly when he suggested that Philadelphia Eagles quarterback Donovan McNabb was overrated because “the media has been very desirous that a black quarterback do well.”

His TV show lasted only four years, but his radio show remained a powerhouse. In 2008, he signed a new eight-year contract that paid him $50 million a year. “I’m not retiring until every American agrees with me,” he said at the time.

That year, the election of Obama (whom he mocked as a “Halfrican American”) to the presidency gave him someone new to condemn. “Never in my life have I seen a regime like this, governing against the will of the people, purposely,” he wrote of the president in 2010.

Periodically, the little brush fires of controversy that always surrounded him flared up and threatened to engulf him. Media Matters of America, a liberal watchdog organization founded by David Brock, monitored his shows for every outrage with an eye toward pushing advertisers to bail out on him. Sometimes he gave them ammunition, as in 2006, when he accused actor Michael J. Fox of faking his Parkinson’s symptoms.

In 2012, Limbaugh referred to Sandra Fluke, a Georgetown University student, as a “slut” and “prostitute” after she testified about contraception before a congressional committee. This time, his remarks struck a nerve. “Limbaugh’s recent attack on Georgetown law student Sandra Fluke was as irresponsible as it was abhorrent,” Brock wrote.

Obama called Fluke to offer his support, which led to new mockery from Limbaugh. Dozens of sponsors withdrew from his show, and Limbaugh offered a rare apology to Fluke. “I sincerely apologize to Ms. Fluke for the insulting word choices,” he said.

He was also in the news for legal problems stemming from what he said in 2003 was an addiction to prescription drugs. Limbaugh was arrested in 2006 for improperly obtaining these drugs; he settled the case in 2009 without going to jail.

And he remained on the air, no longer unique in his approach but still a potent force.

“For 20 years, three hours a day,” Wolff wrote in 2009, “nothing in radio has so moved the audience to action as Rush: the Republican base both buys the pre-owned cars he suggests ought to be bought and champions the causes he’s hot on. Nothing in politics, or the news cycle, is as direct and powerful as this. In seconds, he can move an awesome tide, unleashing email, telephone calls, and scary Web-site rage.”

Limbaugh was married four times; Supreme Court Justice Clarence Thomas officiated at his third wedding and pop superstar Elton John sang at his fourth. He is survived by Rogers, whom he married in 2010.