A man accused in the Jan. 6 unrest was left partially blind and moved to another facility, lawyers say. 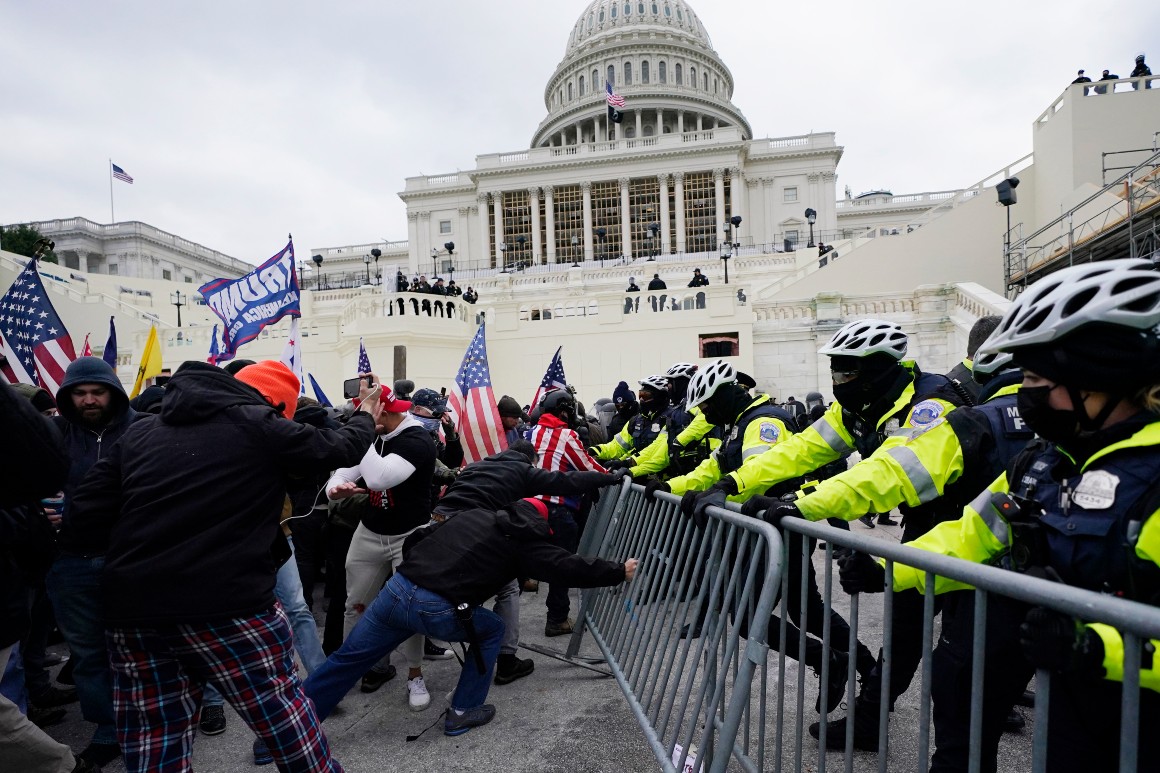 Tensions are running high between guards and inmates at a D.C. jail housing many of the defendants in Jan. 6 cases, with at least one of those prisoners alleging that he was brutally beaten by correctional officers.

For weeks, Capitol riot defendants being held in Washington have complained that they are locked in their cells with virtually no human contact for 23 hours a day. But a startling, graphic account offered publicly in court on Tuesday by one such inmate, Ronald Sandlin, went further: alleging that guards have subjected those charged in the Jan. 6 events to violence, threats and verbal harassment.

“Myself and others involved in the Jan. 6 incident are scared for their lives, not from each other but from correctional officers,” Sandlin said during a bail hearing conducted by video before U.S. District Court Judge Dabney Friedrich. “I don’t understand how this is remotely acceptable,” he added, saying he was being subjected to “mental torture.”

In an unusual direct plea to the judge, Sandlin said another Capitol riot defendant, Ryan Samsel, “was severely beaten by correctional officers, [is now] blind in one eye, has a skull fracture and detached retina.”

Sandlin also described racial tension between minority guards and the largely white defendants, some of whom have been publicly accused of membership in or association with white supremacist groups.

Sandlin said guards tackled “to the ground” one high-profile prisoner, Richard Barnett, 60, who was photographed with his boot up on a desk in Speaker Nancy Pelosi’s office. Sandlin said one of the guards declared, “I hate all white people and your honky religion.”

The three defendants raising alarms are charged with a wide range of crimes related to the Capitol breach. Sandlin, who posted images of himself smoking a joint in the Capitol Rotunda, is accused of tussling with multiple U.S. Capitol Police officers guarding the Senate chamber and trying to rip the helmet off of one of them. Samsel, who is currently on parole in Pennsylvania and is wanted for an unrelated alleged assault in New Jersey, is charged with toppling barricades on top of police officers, telling one, “We don’t have to hurt you, why are you standing in our way?”

Barnett is charged with entering the Capitol armed with a stun gun, entering Pelosi’s office and putting his feet on the furniture, as well as stealing a piece of mail from her office.

Defense attorneys for Samsel and Barnett confirmed the episodes described in court by Sandlin, which they said they learned about from their clients, clients’ family members and other attorneys.

“There is a pattern of abuse and of targeting of the defendants who are being held pursuant to what happened on Jan. 6,” said Joseph McBride of New York, a defense lawyer for Barnett. “It is targeted. It is ruthless. It is nonstop.”

Steven Metcalf, a lawyer for Samsel, said that after his client complained last month about slow delivery of toilet paper, he was zip-tied, moved to a cell outside the view of surveillance cameras and brutally beaten by guards.

“I have seen Ryan. He has two black eyes to this day, two weeks later. All the skin is ripped off both wrists, which shows the zip ties and how tight they were,” said Metcalf, also from New York. “Other inmates said his face looked like a tomato that was stomped on.”

READ:  Moderna close to revealing first data on whether its vaccine works

“We intend on filing a lawsuit against the two specific guards and the facility responsible for this scenario because Ryan Samsel did not deserve to get targeted and treated like this,” Metcalf added.

Another attorney for Samsel, Elisabeth Pasqualini, said that her client was moved to another “undisclosed” location earlier on Tuesday and that the episode in which he was injured last month was under investigation by the FBI.

Nearly all the Jan. 6 defendants who have reached Washington and remain in custody are being held at the Correctional Treatment Facility, a complex in southeast D.C. typically used for prisoners with health needs or who require isolation from the general jail population. About 40 Capitol riot defendants are currently at the CTF, defense lawyers said.

A D.C. jail spokesperson and an attorney who represents the D.C. government on such issues did not immediately respond to requests for comment on the allegations. Jail officials have previously informed the court that the Jan. 6 defendants have all been held in “restrictive housing” in order to protect them from potential altercations with other inmates.

“For their own safety and security, all of the detainees who are being held at the Jail in connection with the events that occurred on January 6, 2021 at the Capitol Building have been placed in restrictive housing,” Deputy Warden Michelle Jones said in a declaration submitted last month to Judge Royce Lamberth, who is presiding over a separate case related to Jan. 6.

One veteran D.C. defense attorney said many Capitol rioters were new to the District’s jail system and might believe they’re being specifically targeted when they’re simply unfamiliar with being in jail at all — particularly in the harsh conditions of 23-hour-a-day isolation.

During the hearing on Tuesday, Friedrich made no direct response to Sandlin’s complaints about the jail, but she set a further hearing for Thursday on his possible release from custody.

Pasqualini said she recognized that many people might have little sympathy for those accused of storming the Capitol, but that people who haven’t been convicted of any crime shouldn’t face such harsh conditions or abuse.

“For anyone inclined to think as a charged ‘Capitol Rioter,’ Mr. Samsel got what he deserved, I say get down from your mountain top, the hypocrisy in that air is distorting your vision,” she said in a statement. “Either we live in a democracy that believes in due process and equal justice before the law or we do not.”