The former vice president failed to produce the massive big-city margins some Democrats expected. One reason is that Trump surpassed his own 2016 performance in many cities. 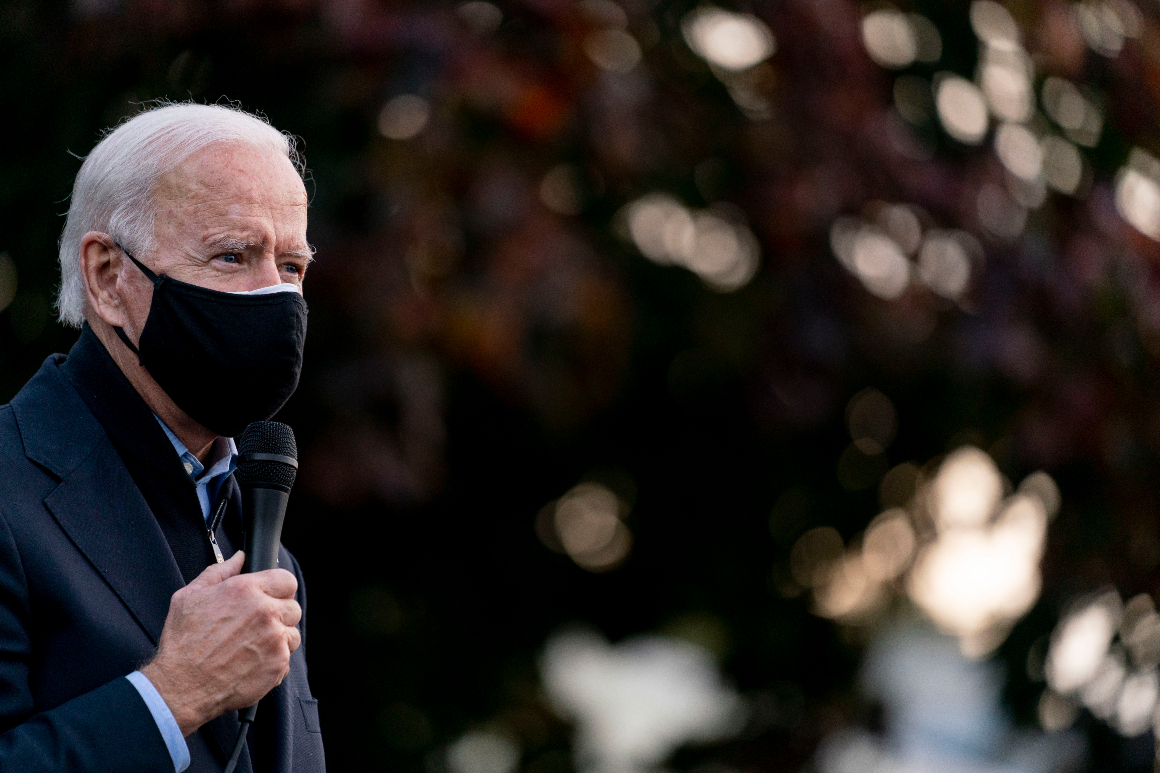 But it was suburbia — not large cities — that delivered the over-the-top margins that put Joe Biden in the White House. And in at least a handful of cities in key battleground states this month, Trump actually ran slightly better than in 2016.

Trump improved on his performance in urban areas in part because he did better in mostly white, working-class precincts where he ran strongly four years ago. And in some places, Trump also picked up slightly more votes in neighborhoods with large Latino populations and, to a lesser degree, majority-Black communities.

The results aren’t enough to signal a GOP resurgence in urban America — Biden won overwhelmingly in most big cities. But when paired with Trump expectation-defying performance in predominantly Latino areas in south Texas and Florida, it’s a warning sign for the Democratic Party in the years ahead.

“Trump did better than I thought he was going to do,” said former Pennsylvania Democratic Gov. Ed Rendell, also an ex-Philadelphia mayor. “There was a backlash, I think nationwide, among people who were afraid of the riots and afraid of what they saw and afraid of this ‘defund the police’ stuff, which, although we tried to debunk, we didn’t debunk enough.”

In Philadelphia, Trump picked up more total votes this year than he won in 2016. In Milwaukee, the number of total ballots cast was essentially flat, and somewhat down in majority-Black wards. In Detroit, Trump found more votes in 2020 than four years ago, while Biden drew about 1,000 fewer than Clinton, according to unofficial results. And in Miami, where the shift was among the starkest, Biden carried the city by 19 percentage points — less than half of Clinton’s 40-point win.

The story was similar even in states where the presidential race wasn’t competitive: In Chicago, Biden is likely to secure a smaller margin of victory than Clinton once all the ballots are counted. In Boston, Biden’s margin over Trump is virtually the same as Clinton’s, with 89 percent of estimated votes tallied.

“In Black and Latino wards, Trump performance improved slightly. In the kind of white, liberal, East Side, more suburban-y parts of the city of Milwaukee, the blue performance improved slightly,” said Sachin Chheda, a Wisconsin-based Democratic strategist. “I’ve seen a lot of evidence that the Trump campaign went into the Latino community with kind of an anti-Black message, and went into the Black community with an anti-Latino message, and that they were really targeting and more sophisticated in their kind of scorched-earth campaign. And that may have had some impact.”

While Biden won large margins in most big cities, and also with Black and Latino voters, the exact margins proved critical in a race that came down to just tens of thousands of votes in multiple swing states. From the beginning of the campaign, Trump’s team set out to diminish support for Biden among Black and Latino voters, particularly men, airing TV ads in battleground states attacking him for supporting tough-on-crime legislation as well as Spanish-language spots that slammed his mental fitness. Trump’s campaign also highlighted criminal justice reform legislation that he signed, known as the First Step Act.

While big cities delivered large tranches of votes for Biden in battleground states, it was the increasingly diverse and Democratic-trending suburbs that provided the blowout margins for him. The suburbs in Pennsylvania, Wisconsin and Michigan came out strongly for Biden, making up for the fact that he matched Clinton while Trump grew his support in key cities. Many of those suburbs have been tilting leftward for years, which is a significant dilemma for the GOP. Looking at down-ballot races where Republicans did better than expected, though, it’s clear some suburban voters have not become partisan Democrats but are instead simply swing voters who cast a ballot against Trump.

That could pose a problem for Democrats in upcoming election cycles. And already, Trump’s performance in cities — as well as Democratic Party losses in House and Senate races — has set off a debate among Democrats over whether they veered too far left this year, or were insufficiently bold and organized enough to turn out more of their base. Several Democrats in major cities said the party needs to invest in long-term organizing there.

Michigan state Rep. Sherry Gay-Dagnogo, who chairs the Democrats’ Detroit caucus, said she was contacted by an outside liberal group to recruit canvassers to knock on doors for Biden just over a week before Election Day. But it took days for them to create walk lists for her and sort out other problems.

“The party has to find a way to not wait until the ninth hour to just start throwing resources,” she said. “The first day I was able to send a group of people out was — so stressful — but it was Tuesday morning. The election day! What sense does that make? So if you could do it in the ninth hour for $300 a day, $30 an hour, you can do it for half that, a couple of months in advance.”

In Detroit, Biden won just under 234,000 votes, about 1,000 fewer ballots than Clinton, according to unofficial results. By way of comparison, former President Barack Obama racked up nearly 282,000 votes in 2012. Trump went from receiving nearly 8,000 votes in 2016 to almost 13,000 this year. Some Democrats in the city said population loss in recent years likely was a factor.

Instead of running up the score in Michigan’s biggest city, Biden boosted his margins in the suburbs. In Oakland County, for instance, he beat Trump by 14 percentage points, compared to Clinton’s 8 points — giving him a 108,000-vote edge over Trump, which is double Clinton’s margin of victory.

A similar picture emerged in Philadelphia. Trump won nearly 130,000 votes this year, compared to about 109,000 in 2016, with more than 98 percent of the estimated votes counted. About 26,000 ballots were still left to be tallied as of Saturday, some of which are provisional and will likely not qualify to be included, according to election officials. Biden received more than 584,000 votes, just surpassing Clinton’s raw vote total. It’s likely he’ll fall below Clinton’s margin of victory or at best exceed it by only a few thousand votes.

Brendan McPhillips, Biden’s Pennsylvania state director, said it is misleading to analyze election returns in Philadelphia before all the ballots are counted and reiterated that Black and Latino voters were key to his win. 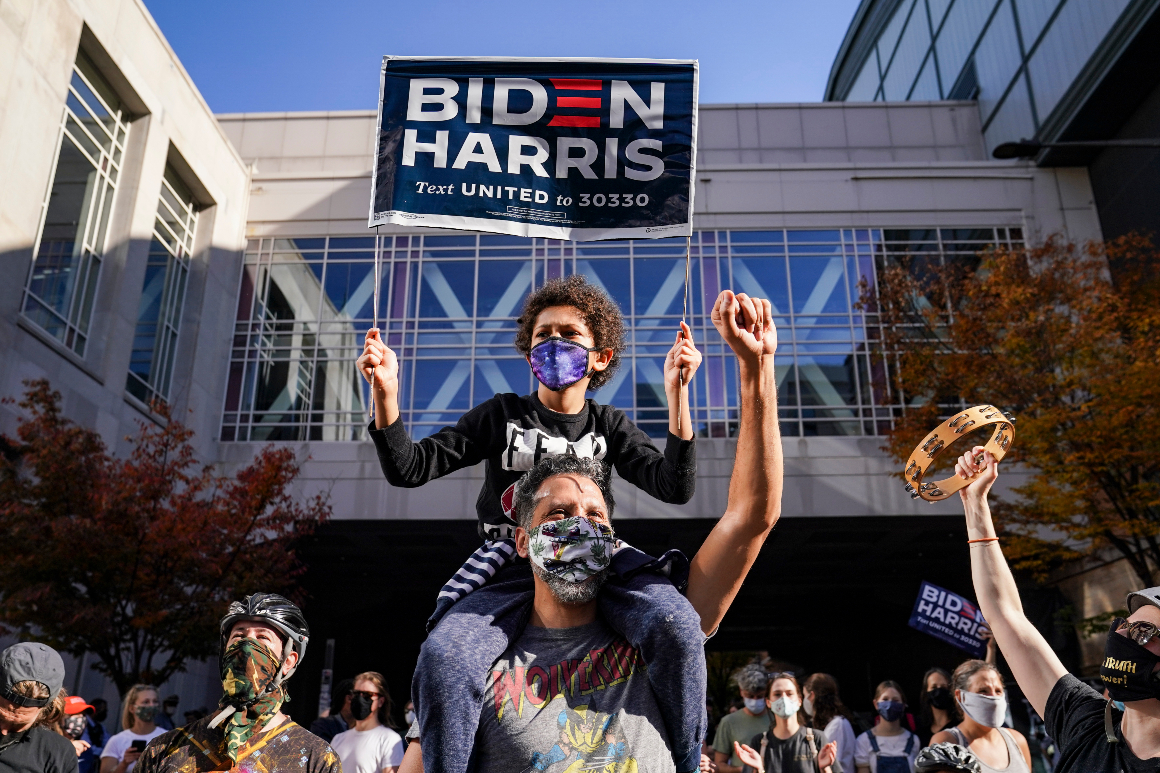 Trump performed best overall in Northeast Philadelphia, which is home to many police officers and firefighters, as well as white neighborhoods in the River Wards and South Philadelphia. Democratic Rep. Brendan Boyle, a Philadelphia lawmaker close to the Biden campaign, said he was concerned enough about the former vice president’s softness in Northeast Philly that he asked him to visit, which he did two days before the election.

“If you took a drive through Northeast Philadelphia, you would see many lawns having a yard sign that says ‘Back the Blue’ on it or a blue light on their porch,” he said. “There’s no question that in different places in the country where there are a lot of police populating, the Republican branding of linking quote-unquote ‘defund the police’ to Democrats, it stuck in certain areas.”

Trump also overperformed in some predominantly Latino and Black wards in Philly — relative to both his own 2016 results and prior GOP nominees — though not enough to be competitive with Biden. In the city’s neighboring 7th and 19th Wards, which are heavily Puerto Rican, Trump went from winning a combined 600 votes in 2016 to nearly 1,700 this year, and there are still votes left to be counted.

READ:  An Epic Moment of National Shame: The Debate Was an Embarrassment for the Ages

In nearly all of the city’s majority-Black wards, Trump also picked up more total votes, though he still lost them overall by huge margins — in some cases, as much as 97 percent to 2 percent.

In the 50th Ward, for instance, a majority-Black area that is known for turning out voters at one of the highest rates in the city, Trump jumped from 280 ballots to about 410, as of Saturday.

“Those riots and looting that took place earlier this year, that was something that I think the city dropped the ball on big time … and I think that’s something that people are concerned about,” said Martina White, a GOP state representative in Northeast Philadelphia and the city’s Republican Party chair. “The minority businesses … they felt like they were left alone in the city, that there was no one there fighting for them. And we reach out to our small businesses.”

These modest gains weren’t enough to put Trump over the top statewide. Biden won Pennsylvania in large part because of his surge in the suburbs, as well as his stronger performance in the northeastern corner of the state than Clinton and his ability to limit his losses in some red counties. The Philadelphia suburbs, for instance, delivered a margin of victory to Biden of nearly 290,000 votes, compared to 188,000 for Clinton four years ago.

The fact that Trump found more votes in Philadelphia wasn’t a shock to some Democrats in the city.

Philadelphia City Councilwoman Maria Quiñones-Sánchez, a member of Biden’s Latino Leadership Council in Pennsylvania, publicly raised concerns last month about what she said was inadequate outreach to Hispanic voters. She disagreed with the Biden team’s Covid-19-related decision to avoid knocking on voters’ doors until October.

“I think it confirms my criticism,” she said. “With more engagement, our numbers could have been better.”

Isaiah Thomas, another city councilperson, sounded the alarm throughout the campaign about a lack of excitement for Biden among young Black men.

He said he saw rampant disinformation about Biden on social media targeting young voters of color. He also said that Trump’s harnessing of the government for political gains, such as putting his name on stimulus checks, might have had an impact.

“People think that he was more responsible for the money that he got than he actually was,” he said. “And the food giveaways — we did a bunch of food giveaways, and when you open the box, there’s a letter from the president.”

Marc Caputo contributed to this report.