The president-elect wants Congress to restart negotiations that have been stalled for months, but it’s not clear he can break the deadlock. 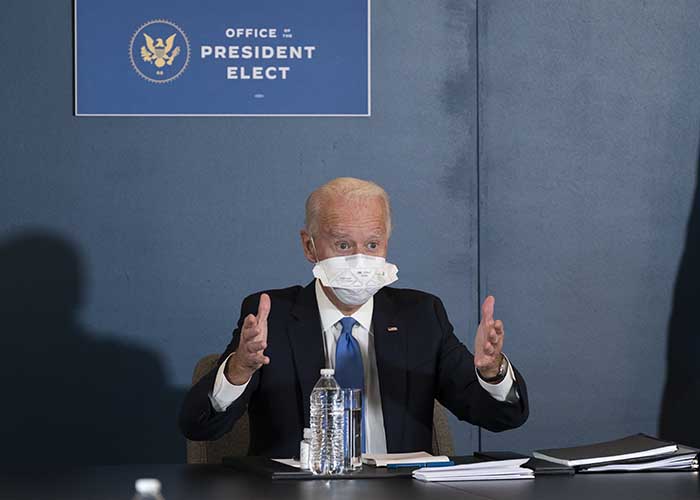 As the pandemic worsens and the U.S. economy teeters on the edge of another downturn, President-elect Joe Biden is ramping up calls for Congress to pass another coronavirus relief bill before he’s sworn in.

At the same time, he’s aligned himself with Democratic leaders in Congress, who have insisted on roughly $2 trillion in new relief spending — a price tag Senate Republicans so far have refused to accept. If Biden maintains a unified front with Hill Democrats rather than throwing his weight behind a smaller package, it's unlikely the two parties will be able to reach a deal before the year is out.

“They are going to be working in lockstep," Biden transition adviser Jen Psaki told reporters on Friday, referring to the president-elect and Democratic lawmakers. "They're in lockstep agreement that there needs to be emergency assistance and aid during the lame duck session to help families, to help small businesses."

Biden met with House Speaker Nancy Pelosi and Senate Minority Leader Chuck Schumer in Wilmington, Del., on Friday to discuss how to move a bill through Congress in the lame duck, inserting himself into talks that have been stalled for months. He and his top aides have publicly and privately pushed for Congress to pass another coronavirus relief package as soon as possible, warning that a failure to act will leave the virus unchecked and the economy unsupported just as the country is headed into a long winter.

Biden, Pelosi and Schumer agreed such a package must include priorities such as small business aid, money for state and local governments, expanded unemployment benefits and “affordable health care for millions of families,” according to a readout of the meeting provided by Biden's transition team.

There is no path forward, however, without Senate Majority Leader Mitch McConnell, who appears unwilling to pass the sort of multitrillion-dollar relief package that Democrats want, particularly when it comes to providing aid to state and local governments.

People close to the Biden transition’s economics team say they are acutely aware they will have to deal with a Republican Senate if Democrats don’t win two runoffs races in Georgia and may not be able to pass as big a stimulus package as they would like. Republican senators tried to pass a $500 billion package in October, and most have been loath to consider anything above $1 trillion.

Republican and Democratic congressional leadership staffers who met on Thursday could not even agree on what they were talking about: Schumer framed the discussion as the restart of Covid relief negotiations, while GOP aides said it was simply about the spending bill that Congress must pass by Dec. 11.

One potential path forward is for both parties to agree to extend some relief programs through that spending bill. Lawmakers could use the deadline as an opportunity to renew some existing programs currently set to expire at the end of the year — including expanded unemployment insurance, a national eviction moratorium and student loan forbearance — within or alongside that legislation.

Biden is entering negotiations that have foundered for months, with Trump’s top negotiators, Treasury Secretary Steven Mnuchin and Mark Meadows, the White House chief of staff, unable to reach a deal with Pelosi despite a seemingly endless series of meetings and calls.

Stepping into the breach now could be risky for Biden, who won’t be sworn in for another two months. But Rahm Emanuel, who helped push an economic stimulus bill through Congress in the early months of the Obama administration while he was White House chief of staff, said securing a compromise in the lame duck could allow Biden to use his limited political capital to push for other priorities once he takes office.

Waiting until after Inauguration Day might boost the chances of securing a larger deal — or at least one for which Biden could more easily take credit. But that’s not Biden's focus, one person in touch with the transition team said.

“They care more about governing than they care about politics on this one," the person said.

Jared Bernstein, a former chief economist to Biden during the Obama administration who remains an informal economic adviser, acknowledged this week that incoming presidents “typically want to wait until they have the reins of power in order to put their fingerprints on the policies coming out of the door.”

“But in this case, you hear the president-elect saying this is something that should happen now,” Bernstein said at a conference on Wednesday. “And the reason is because the economy is at a very precarious moment.”

The renewed push for a deal before Inauguration Day comes as new applications for unemployment benefits have started increasing again after weeks of steady decline, and the number of Americans who have been unemployed for more than six months is rising at its fastest rate ever. Roughly 12 million Americans are set to lose their jobless aid at the end of the year unless Congress moves to pass a deal.

Biden's transition team is heavily focused on making sure the next package includes language on small business relief funds through the Paycheck Protection Program that would ensure that Black-owned businesses and others that had trouble securing loans the first time around are prioritized.

Black-owned businesses are failing at a much higher rate than white-owned businesses, and those that have survived are at significantly higher risk of failing over the next several months — in part because the loan program works through existing bank relationships that many minority-owned small and micro businesses lack. Two people close to the Biden team said it was essential that this problem be addressed.

They are also focused on securing funding for struggling state and local governments and extending enhanced unemployment benefits — although both remain deeply contentious issues between Democrats and the GOP Senate.

READ:  Sports stars' intensifying activism is a blow to Trump

“We may have to give something up to McConnell that we really don’t want to give up to get it, but we simply have to do this,” one person close to the transition said of extending jobless benefits.

Hotels, restaurants and other industries hit hard by the pandemic, meanwhile, have already started lobbying Biden’s team after months of fruitless efforts to convince lawmakers and the Trump administration to pass a bill.

A coalition of trade groups is preparing to launch a digital ad blitz after Thanksgiving targeting Biden’s transition as well as Congress and the White House. The trade groups will also urge the hotel owners, restaurateurs and others who make up their membership to make calls and send emails pressing lawmakers to reach a deal.

Brian Crawford, the American Hotel & Lodging Association’s top lobbyist, said he hoped that, after campaigning as a unifier, Biden “is going to urge Congress to seek an agreement before he’s officially sworn in.”

“We have businesses that are in the process of going bankrupt,” Crawford added. “We can’t wait until January or February for relief.”

Trade groups are pressing at the very least for Congress to authorize another round of loans through the Paycheck Protection Program, which distributed about $525 billion in forgivable loans to small businesses before shutting down in August. Nearly $134 billion that Congress coughed up to fund the loans before the program shut down remains unspent.

“The president-elect is the head of the Democratic Party,” said Tori Emerson Barnes, the top lobbyist for the U.S. Travel Association. “He just won the presidency. And I think his influence is significant.”

“If anyone can bring folks together, it should be him,” she added.