The new CDC guidelines on face masks reshape the political dimensions of the Covid debate facing the White House. 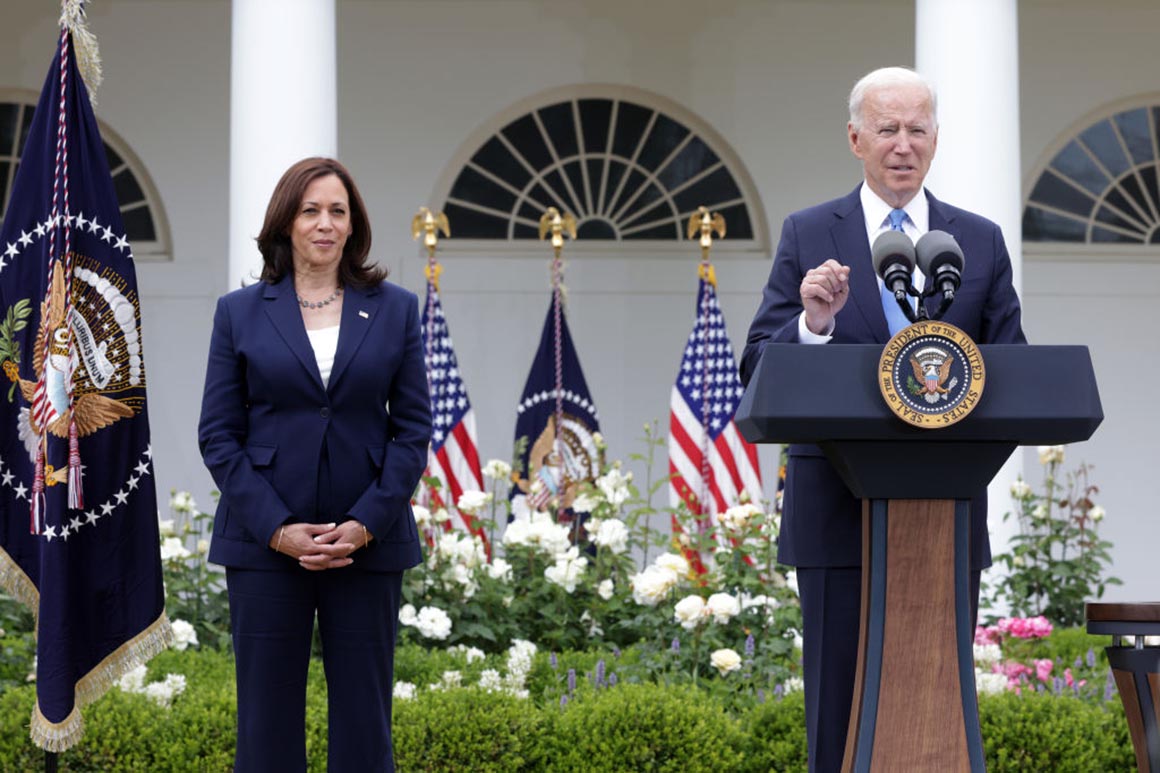 When the news broke that Americans no longer had to wear masks if they were fully vaccinated, President Joe Biden made his move. He took off his mask and so did the Republicans sitting across from him negotiating an infrastructure deal at the White House.

In the Capitol, Senate Minority Leader Mitch McConnell shed his mask and announced, “Free at last!”

“We feel naked!” First lady Jill Biden joked after removing her mask during a trip in West Virginia.

The Biden administration has approached the pandemic with extreme caution each step of the way, urging Americans to maintain health precautions, even as vaccine access ramped up. With the new guidelines announced by the Centers for Disease Control and Prevention on Thursday, it offered America its most tangible hope yet that there could finally be a return to normal from a pandemic that has upended society as we’ve known it — and gave Biden the chance to declare a victory of sorts over the virus.

With an average of more than 600 Americans still dying of the disease each week, the outbreak is by no means over. But Thursday’s developments mark a politically significant milestone: Since Covid-19 began ravaging the United States more than a year ago, the face mask has been the foremost symbol of America’s deep political and cultural divisions.

On Thursday, unmasking quickly became a rare event that both Republicans and Democrats genuinely celebrated. It also began to reshape the political dimensions of the Covid debate facing Biden. The new guidelines came after the Biden administration spent months urging Americans to wear masks in virtually all settings. But after using the face covering as a device to lambast the left, conservatives now must contend with the fact that the restriction was lifted under Biden, and that the pandemic also will end under his watch.

Democrats in and out of the White House are already seizing on its significance.

“Today may be remembered in history as V-C Day,” said Paul Begala, the veteran Democratic strategist, comparing the Covid-inspired moment to the World War II victories over the Nazis and Japan. Begala remarked on the images of a maskless Biden and Vice President Kamala Harris, smiling and laughing together in the Rose Garden shortly after the CDC announced its new guidance. “What a contrast to the bad old days of lies, stupidity, denial, hyping hydroxychloroquine and musing about injecting bleach.”

”I suspect Biden’s ad makers are going to save today’s tape,” he added.

While the decision to lift mask requirements for vaccinated adults was issued in the name of science, it also has the effect of neutralizing a potent culture war issue that became an enduring emblem of the right’s attacks on Democrats’ pandemic strategy, even before Biden entered the White House. But messaging challenges are still ahead: The CDC also said Thursday that children up to the age of 12, who are not yet eligible for the vaccine, still have to wear masks. And it’s unclear how restaurants, stores and other venues will be able to distinguish and police the millions of still-unvaccinated people who, according to the CDC, should still wear masks in public.

Now, however, the president is hoping that the vanishing mask becomes something else: confirmation of the effectiveness of vaccines and — in a broader sense — concrete progress that’s impossible to deny — regardless of one’s political party.

“It’ll start to heal some of the wounds out there,” said Saul Anuzis, a former state Republican Party chair in Michigan, where anti-mask rallies proliferated last year. “There's a lot of frustration; people want to get back to normal, whether it's going to school, whether it's going to your local business, whether it's just seeing your neighbors… [mask-wearing rules] just had a very negative effect and I think people in most of the country, especially politicians, were starting to feel heat.”

Inside the White House, Biden’s advisers were trying to balance the sense of levity the occasion brought (and the fact they no longer had to wear a mask, even inside the West Wing) with the imperative to avoid appearing like they were prematurely celebrating. Still, when the announcement came across email, White House staffers felt a surge of relief and jubilation. They took off masks and some ran over to look at each other, joking that it felt like it was the first time they had seen each other.

“It was like a moment in a war when it’s getting closer to ending,” one White House staffer said. “Going back to work the rest of the day, it felt like you slept four more hours.”

The administration is still driving toward its goal of delivering at least one shot to 70 percent of adults by July 4, and is in the midst of new initiatives targeting hesitant Americans by making it easier — and cheaper — for them to get a vaccine shot. But the White House itself took quick action, telling staffers there they could shed masks on campus if they were vaccinated and announcing to the White House press corps that they could remove their masks if fully vaccinated. Already, the White House had announced it would start bringing more employees to work inside the offices starting this summer.

The announcement comes at an opportune time for the president, who has had a challenging week on a number of fronts, from growing fears over inflation and a weak employment report to the Israeli-Palestinian conflict in Gaza to a pipeline hack at home that has caused a runs at the gas pump and has Republicans comparing Biden to President Jimmy Carter. It also comes after Biden himself had been under increasing pressure from the right — and the news media — for, what else, wearing a mask even as his own rules said he didn’t need to.

Since last year, conservatives across the country, many aligned with former President Donald Trump, have steadfastly protested mask wearing. Some held large-scale mask-free protests while others clashed individually in public places, sometimes violently. In one case in January, an anti-mask group in Los Angeles stormed a shopping mall chanting, “no more masks!” which reportedly led to verbal and physical confrontations.

“Your response when you see children wearing masks as they play should be no different from your response to seeing someone beat a kid in Walmart,” Carlson said.

READ:  The congressional underclass erupts in fury after Gohmert gets Covid-19

Even some of the president’s supporters began to worry this spring that the administration’s insistence on modeling mask-wearing — even outdoors, with few people around, when all the people involved have long been vaccinated — could begin to undermine their own attempts to incentivize Americans to get the vaccine.

From a scientific standpoint, Biden’s aides maintained that they were on solid ground. But it became hard to avoid the awkwardness of masking up while conditions on the ground improved and people hungered for signs of concrete improvement from their leaders. Discarding masks could give them just that.

“And politically speaking,” said Tim Miller, a former Republican operative who backed Biden and now writes for The Bulwark, “I think it helps create a sense of competence, normalcy, and the country coming back that will naturally give him a boost.”

In the moments after the announcement, the White House began again trying to lower the political temperature around masks — framing masking up after vaccination as a personal choice that shouldn’t be questioned: “Be patient with one another,” Biden said.

“You know, some may say, ‘I just feel more comfortable continuing to wear a mask,’” the president continued. ”Please treat them with kindness and respect. We’ve had too much conflict, too much bitterness, too much anger, too much politicization of this issue.”

The Covid-19 response — despite its massive challenges — has so far emerged as one of the brightest spots early on for an administration that openly measures it’s progress by pointing to public opinion polls. An AP-NORC Center for Public Affairs Research survey this week found that Biden’s overall approval rating stood at 63 percent, and 71 percent of Americans approved of his handling of the pandemic, including 47 percent of Republicans.

Ron Klain, the White House chief of staff, took to Twitter to highlight a report from Cyrus Shahpar, Biden’s Covid-19 data director, who wrote that the seven-day average of deaths reached its lowest point since April 1, 2020. Klain said deaths have dropped more than 80 percent after “114 days of unmatched pace in distributing and administering vaccinations.”