The president said he was hopeful about ramping up capacity, as parts of the country start to bump up against limitations on how many shots they can administer. 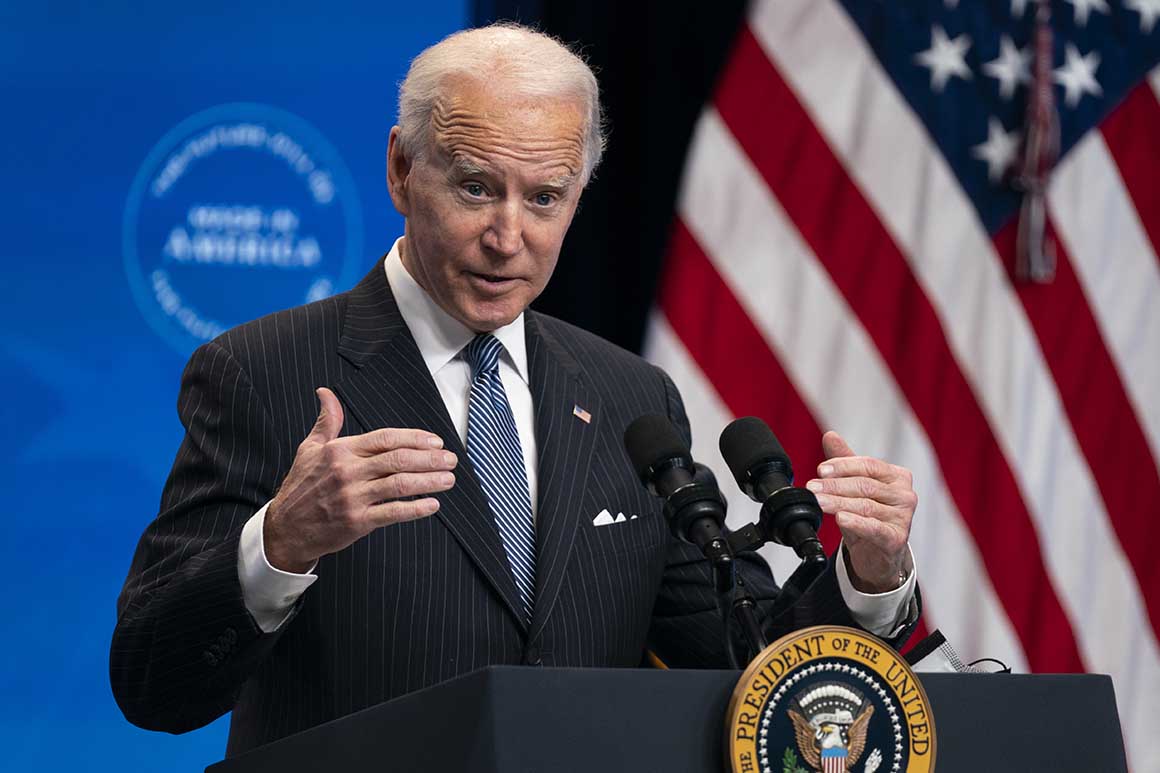 President Joe Biden said on Monday he was eyeing a more ambitious target for daily coronavirus vaccinations as parts of the country start to bump up against limitations on the number of shots they can administer.

Biden said he was hopeful that the U.S. could ramp up its capacity to administer 1.5 million shots daily. That would be a significant jump from the policy of 100 million shots in 100 days that he made a tenet of his nascent administration.

“I think we may be able to get that to 1.5 million [shots] a day, rather than 1 million a day. But we have to meet that goal of a million a day,” Biden told reporters after signing an executive order tightening “Buy American” rules.

Biden said he was optimistic that the vaccine would be readily available to those who want it by sometime in the spring.

“We’re trying to get out a minimum of 100 million vaccinations in 100 days, and move in the direction where we’re well beyond that in the next 100 days, so we can get to the point where we reach herd immunity in a country of over 300 million people,” he said.

Biden’s nominee for surgeon general, Vivek Murthy, on Sunday similarly said that the administration had begun to look beyond its initial target of 100 million vaccinations.

“That’s a floor; it’s not a ceiling,” Murthy said on ABC’s “This Week.” “It’s also a goal that reflects the realities of what we face, what could go right but also what could go wrong.”

By the end of former President Donald Trump’s time in office, the nationwide rate has hovered around that million-shots-a day mark, though states and local officials have fretted that the supply is showing signs of unsustainability that may constrain them from meeting demand as they begin expanding eligibility to tens of millions of people.

READ:  The virus slams into a broken Washington

Some of Biden’s top health advisers have expressed similar supply concerns as they wrap their heads around the first major test of the administration, and have intermittently swiped at their predecessors over the precarious state of the rollout the president has taken over.

White House press secretary Jen Psaki told reporters on Monday that the situation was “much worse than we could have imagined.”

Biden’s chosen director of the Centers for Disease Control and Prevention, Rochelle Walensky, said on “Fox News Sunday” that the supply was the “most limiting constraint” right now but that hope was that it will be resolved by later this year.

Focus on the vaccination effort has intensified as at least two variants of the virus have begun to raise fears among medical experts. One strain, identified in the United Kingdom, appears to be more transmittable — and potentially more deadly, Anthony Fauci, the top U.S. infectious disease expert, said on Monday — while a strain of the virus found in South Africa has shown resistance to antibody treatments.

Biden is increasing travel restrictions, including a ban on most non-U.S. citizens traveling from South Africa and several other countries, in an effort to keep the variant strains of the coronavirus at bay.