Progressives are eager to see the SEC step up to challenge business because they’re not confident that Democrats in Congress will be able to do that. 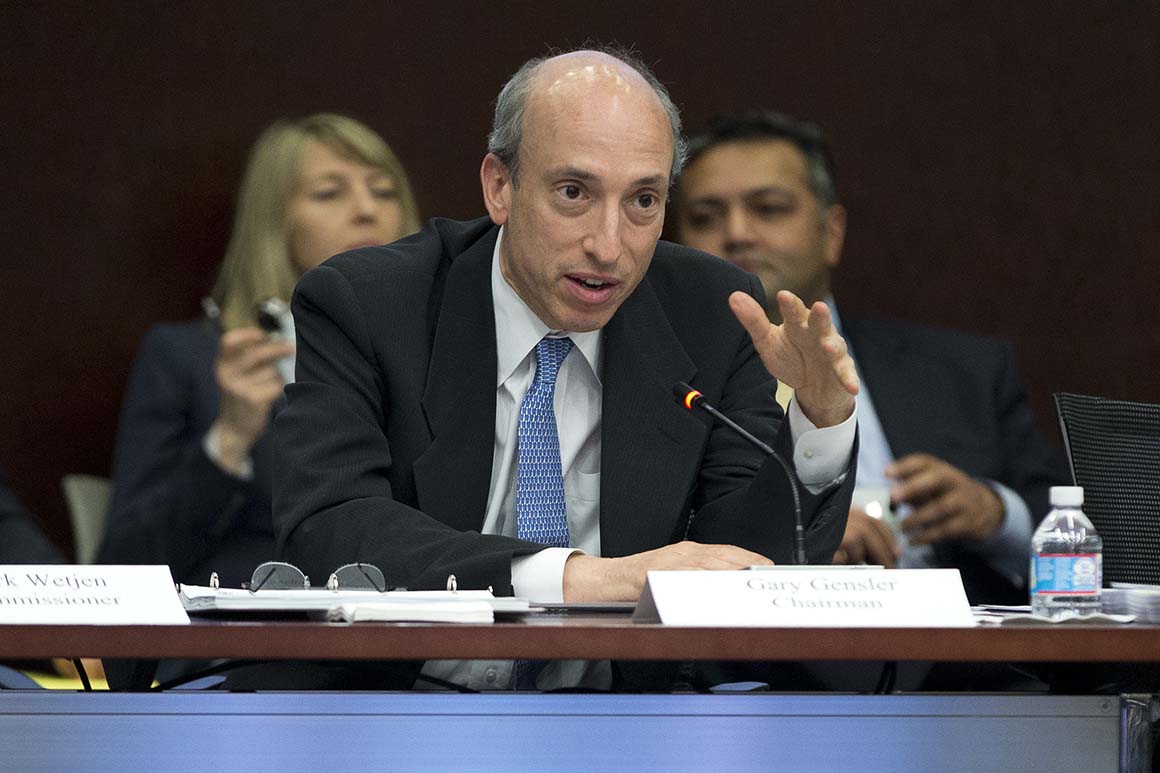 Sen. Elizabeth Warren in January praised Gary Gensler, President Joe Biden’s nominee to lead the Securities and Exchange Commission, as a “tenacious” Wall Street regulator. Now, after a turbulent first two weeks on the job for Gensler, Warren and her allies are sending a new message: Do better, Gary.

The honeymoon between Gensler and his long-time champions on the left came to a stunning end in recent days after he rattled progressives by naming a veteran corporate defense lawyer, Alex Oh, to lead the agency’s policing of financial wrongdoing. In a twist, Oh abruptly resigned less than a week later after a federal judge reprimanded her and others defending ExxonMobil Corp. in a lawsuit brought by Indonesian villagers.

The episode has left Gensler at odds with key allies who for years have held him up as an ideal regulator. The former Goldman Sachs partner-turned-Wall Street watchdog infuriated bankers when he served in the Obama administration by curbing trading activities that had fueled the 2008 global financial crisis.

The incident also underscores the increasingly assertive approach that progressives are taking to influence hiring in the Biden administration, even if it means challenging their friends. Charting the direction of the SEC is a big deal for progressive lawmakers and activists because the independent agency has sweeping powers to regulate corporate America and limit the clout of big business.

"The SEC enforcement division has failed for a generation to aggressively enforce our securities law,” Warren, a Massachusetts Democrat, said in a statement. "Gary Gensler now has a chance for a redo and to make clear with his selection that he intends to break from the division's troubled history, and I very much hope he takes it.”

With trust strained, Gensler will face fierce scrutiny and a greater likelihood of criticism from the left as he tries to execute what was going to be a highly contentious agenda anyway, including forcing companies to disclose the risks they face from climate change and writing rules for cryptocurrency.

"Gary Gensler was perceived by a lot of people as achieving the sweet spot of having worked on Wall Street but also having a proven track record of holding big corporations accountable," said Adam Green, co-founder of the Progressive Change Campaign Committee, which along with other groups had urged Gensler to remove Oh before she resigned. "That's why it was so surprising that his instinct was to appoint someone as the main enforcement person who had no track record of holding big corporations accountable and literally had just come off representing big corporations like ExxonMobil."

Progressives are eager to see the SEC step up to challenge business because they’re not confident that Democrats in Congress will be able to do that.

“There’s a general belief the SEC is a way the executive branch — without getting Joe Manchin’s approval — can make progress on reining in corporate misbehavior,” said Revolving Door Project Executive Director Jeff Hauser, who led efforts to press Gensler to replace Oh. “A ton of the progressive agenda can be summarized as making corporate America follow the rules.”

During the Obama years, Warren hounded then-SEC Chair Mary Jo White — another veteran defense lawyer and also Oh’s onetime boss from her time as a prosecutor — for failing to protect investors, going so far as calling for White to be fired.

"The public relies on the SEC to act as the cop on the beat for an honest marketplace — issuing rules that ensure that investors can make informed decisions and holding rule breakers accountable for their actions," Warren wrote to White in 2015. "When the SEC falls down on the job, the impact is felt throughout the economy as it touches every American family."

For now, Democrats in Congress are holding their fire, at least publicly, even as Gensler’s hiring decision rattled progressives on Capitol Hill. Instead, outside groups aligned with Warren are taking an aggressive approach to pressure the new SEC chief, whom they previously lauded.

On Tuesday, the day before Oh's unexpected resignation, advocacy groups Demand Progress, the Progressive Change Campaign Committee and the Revolving Door Project wrote to Gensler to say they were "surprised and disappointed" by his decision to recruit her and that she should be withdrawn from the post.

The groups homed in on her two decades of work at the law firm Paul, Weiss, Rifkind, Wharton & Garrison, where she represented Fortune 100 companies facing government investigations. Her tenure at the firm followed three and a half years as a federal prosecutor in New York, where she worked under White, then a U.S. attorney.

READ:  U.S. carries out airstrike in Syria after rocket attacks

The following afternoon, the SEC announced her resignation, with Oh citing a "development" in one of her cases. The case turned out to be a class action lawsuit that Indonesian villagers filed against ExxonMobil — Oh's client — seeking to hold the oil giant liable for killing and torture by the Indonesian military during civil unrest between 1999 and 2001. The company had hired soldiers to guard natural gas facilities.

The apparent "development" was a move by U.S. District Judge Royce Lamberth on Monday to admonish Oh and others defending ExxonMobil, following complaints about their conduct.

The judge acted after lawyers for the villagers told the court that ExxonMobil's defense team had characterized them as "agitated, disrespectful and unhinged."

In February, lawyers suing ExxonMobil also accused a company witness of "simply parroting non-responsive defense scripts" during a deposition and of being "a mouth-piece for defense counsel."

"It is evident that this was a calculated strategy, prepared in advance of the deposition and then aggressively implemented," the lawyers suing ExxonMobil said in their complaint to the court, adding that the defense responded to pushback with repeated threats to seek penalties and fees against the plaintiffs.

The defense team countered that the ExxonMobil witness answered “more than 300 substantive questions, but used the prepared notes to respond to only forty-five questions,” court records show.

Paul, Weiss Chair Brad Karp defended Oh in a statement: “Alex is a person of the utmost integrity and a consummate professional, with a strong ethical code.” Karp said that otherwise the firm "cannot comment on this matter because it involves a ruling in an ongoing litigation."

The revelation has stirred concern among Gensler's allies about how Oh was vetted and when the SEC learned about any complaints regarding her conduct. A spokesperson for Gensler declined to comment for this story, including on Oh's vetting process.

Better Markets President and CEO Dennis Kelleher, who served with Gensler on Biden's transition review team, said the alleged conduct "does appear to be particularly egregious" but that it was hard to know for sure, with certain information about the case unavailable to the public.

It's unclear if Oh would have resigned if she had not already been the target of advocacy groups calling out Gensler directly. The groups have become more vocal in recent years as Warren pushed the mantra that "personnel is policy" — a campaign that often requires taking on fellow Democrats.

Hauser, who led efforts to fight Oh's appointment, believes he made an impact. He founded the Revolving Door Project in 2015 and has more recently emerged as one of the most prominent public voices on the left trying to influence Biden's selection of political appointees.

Hauser said of Oh: "I don't think she is the first lawyer to be overzealous on behalf of a corporate client to then get a big government job. I think Revolving Door Project and our allies are what is different now than in the past when this would be just an annoyance she handled."

Not all of Gensler's allies are rushing to criticize him.

Barbara Roper, the Consumer Federation of America's director of investor protection, said she planned to judge him based on his full team.

Roper praised Gensler's decision to hire former AFL-CIO official Heather Slavkin Corzo as his policy director, calling it unprecedented for someone from the advocacy community to be named to such a high role. Roper said Gensler was also under "enormous pressure" to appoint a diverse senior team — a goal she said was worth pursuing. Oh was the first woman of color to serve as the agency's enforcement director.

"I've known Gary for 20 years," Roper said. "I know he's serious about doing a good job as SEC chair. He will get past this. I'm sure he will learn from these events and move forward accordingly."