Alejandro Mayorkas will acknowledge the “horrifying” Jan. 6 assault on the Capitol, according to his prepared testimony. 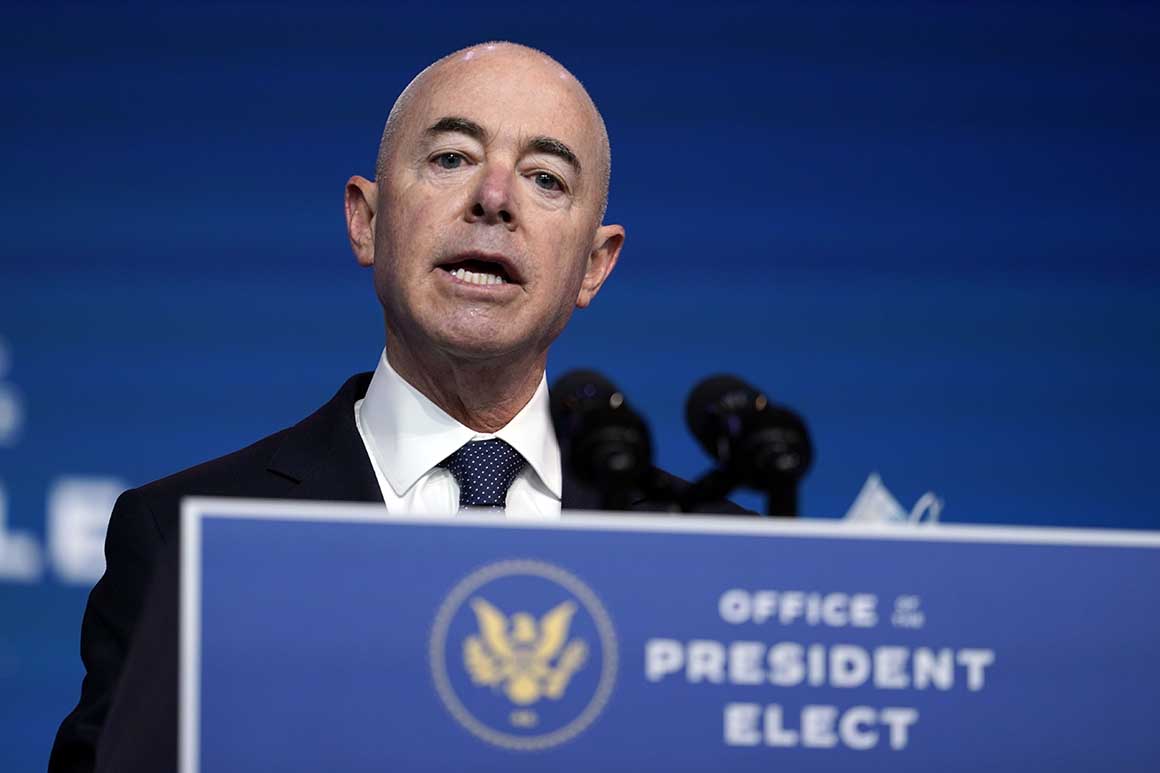 President-elect Joe Biden’s nominee to lead the Department of Homeland Security will pledge on Tuesday to do everything in his power to prevent attacks like the one that targeted the Capitol earlier this month, according to prepared remarks obtained by POLITICO.

Alejandro Mayorkas, who will appear before the Senate Homeland Security Committee for his confirmation hearing later Tuesday, plans to address the recent insurrection head-on, less than two weeks after a pro-Donald Trump mob stormed the Capitol in a series of violent riots that left five people dead and resulted in the president’s second impeachment.

“If I should have the honor of being confirmed, I will do everything I can to ensure that the tragic loss of life, the assault on law enforcement, the desecration of the building that stands as one of the three pillars of our democracy, and the terror felt by you, your colleagues, staff, and everyone present, will not happen again,” Mayorkas, 61, will tell senators in his opening statement.

Mayorkas’ confirmation hearing comes as Washington is locking down ahead of Biden’s inauguration on Wednesday, with fences blocking off large swaths of the city and 25,000 National Guard troops patrolling the streets.

Senate Democrats are pushing to confirm Mayorkas to lead DHS as soon as this week, noting that the recent national-security challenges in the nation’s capital demand steady leadership atop a department that has seen unprecedented turnover at the leadership level during Trump’s administration. Democrats, who are set to step into the Senate majority later this week, will soon have the power to set the Senate’s schedule, but any one senator can object to swift consideration of a nominee.

In addition to Mayorkas, Biden’s nominees to lead the Treasury Department, State Department, Pentagon, and the Office of the Director of National Intelligence are also slated to appear for confirmation hearings on Tuesday as Biden pushes for swift approval of his picks, specifically those involving U.S. national security. That could prove to be difficult for Biden, though, as the Senate is set to soon put Trump on trial again after the House impeached him last week for inciting the riots at the Capitol.

Mayorkas plans to acknowledge the “horrifying” nature of the Jan. 6 attack and note that there remains much to be learned about the full extent of the violent attack. He will also draw on his experience as an immigrant fleeing a communist country as he seeks to lead a department of more than a quarter-million employees.

Mayorkas, who was born in Cuba and grew up in Miami and Los Angeles, has an extensive resumé of government service. He served as U.S. Attorney for the Central District of California from 1998 to 2001, and led U.S. Citizenship and Immigration Services for the first four years of Barack Obama’s administration. He later served as deputy homeland security secretary from 2013 to 2016.

“The love for this country that I learned from my parents made the Jan. 6 attack on the Capitol all the more horrifying,” Mayorkas plans to tell senators.

Biden’s administration is expected to depart significantly from the Trump administration’s DHS policies, most notably on immigration and border security. Biden has vowed to hold accountable the officials responsible for the so-called “zero tolerance” policy at the southern border, which resulted in migrant children being separated from their parents and housed in cages. The policy was pushed by Trump and his first attorney general, Jeff Sessions, in particular.

Biden is expected to unveil a sweeping new immigration plan when he takes office, and he has pledged more broadly to rollback the Trump administration’s hardline immigration policies. Last week, a new wave of migrants began a trip toward the U.S. southern border from Central America, heightening security concerns.

As director of U.S. Citizenship and Immigration Services, Mayorkas was critical in implementing the Deferred Action for Childhood Arrivals program, which provides a legal shield to undocumented immigrants who were brought to the U.S. by their parents. Trump has repeatedly sought to scrap the program, and Biden is seeking to codify it into law.

Biden is also aiming for stability with his Cabinet after four years of firings and resignations that led to several departments and agencies not having a Senate-confirmed leader. The Department of Homeland Security, for example, had six secretaries throughout Trump’s four years, and only two of them were confirmed by the Senate.

While Mayorkas will likely have enough votes to secure confirmation on the Senate floor, he is likely to be pressed during the hearing Tuesday about a 2015 inspector general report alleging that he displayed “an appearance of favoritism and special access” for visa recipients. Mayorkas has pushed back against the allegations, which first surfaced in a 2012 whistleblower complaint, calling them false and unfounded.