The sobering 10-minute speech offered the best glimpse yet at how Biden will guide the country through a historic health crisis. 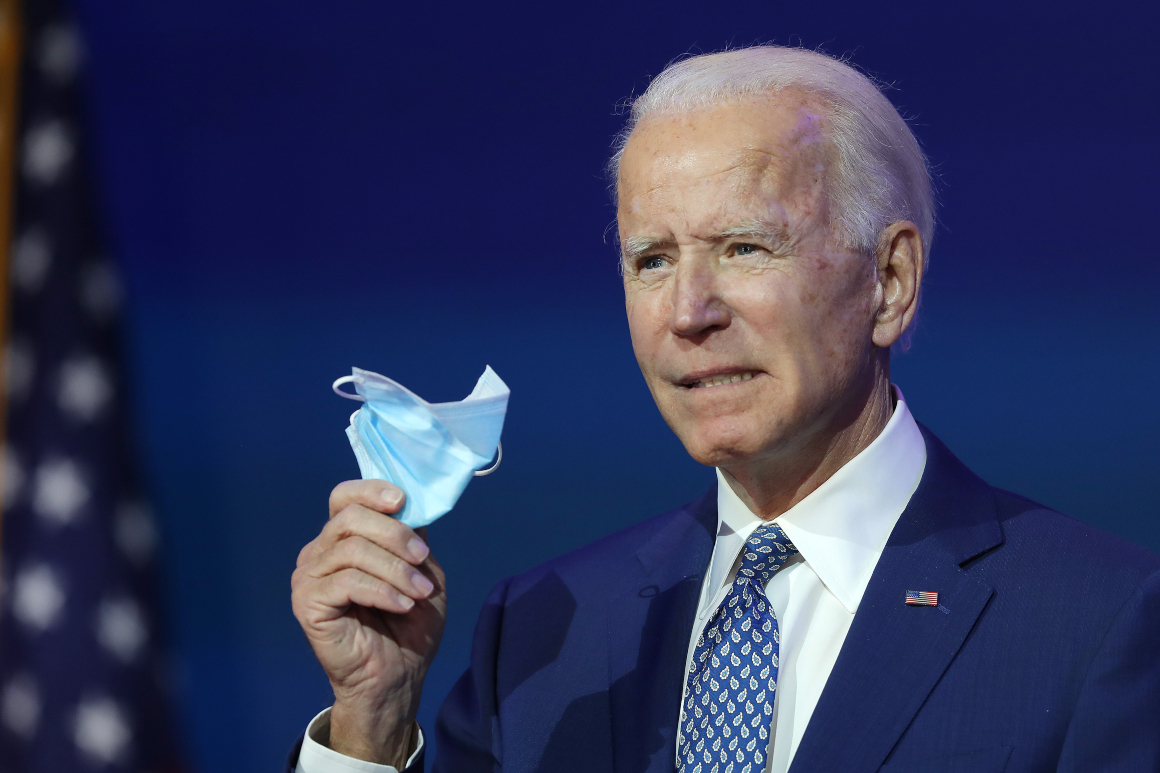 President-elect Joe Biden gave a clear signal on Monday that his administration will take a completely different approach to the coronavirus pandemic — giving a sobering speech warning that the United States would face a "very dark winter," lowering expectations of a rapidly available vaccine, and making an urgent plea for Americans to cover their faces and slow the soaring rate of infection.

Flanked by a masked Vice President-elect Kamala Harris in Wilmington, Del., Biden made early reference to the "positive news" that drugmaker Pfizer had found its vaccine candidate to be more than 90 percent effective. But he said the shot, if approved, "will not be widely available for many months yet to come." In fact, Pfizer announced Monday that the company is aiming to have just 100 million doses ready to distribute in the U.S. by March — enough for only 15 percent of the population.

With U.S. Covid-19 cases soon to climb above 10 million and hospitalizations set to reach a record high, Biden cited projections of a “dark winter” ahead and stressed that if the public does nothing but wait for the vaccine, hundreds of thousands of lives could be lost to Covid-19 in the months before the shots become widely available.

The 10-minute speech offered the best glimpse yet at how Biden — newly addressing Americans as their next commander in chief — will guide the country through a historic health crisis poised to hit its peak as he prepares to assume office. He struck a tone resembling that of a wartime president, speaking of the pandemic’s threat in dire terms and setting public expectations for a drawn-out, monthslong campaign to crush the outbreak in the U.S.

Breaking from President Donald Trump’s framing of public health measures as a threat to a still-limping economy, Biden also described mask-wearing, social distancing and contact tracing as the tools needed to reopen businesses and get the economy moving again.

Masks are the “most potent weapon against the virus,” he said, and the goal of wearing one “is not to make your life less comfortable or to take something away from you. It’s to give something back to all of us: A normal life.”

Biden stressed that while wearing a mask “may seem like a small act ... throughout the history of our nation, we have seen over and over how small acts add up to enormous achievements.”

An overwhelming majority of the public is behind Biden on mask-wearing and other public health measures. In a Harris-Harvard poll released on Sunday, 80 percent of respondents said they support a national mask mandate, and 65 percent said they were more worried about the country opening up too soon than staying closed too long. Still, many GOP officials and much of the public is staunchly opposed, and are likely to resist Biden's calls to mandate masks even as cases climb.

On Monday, Biden announced the creation of his own coronavirus task force that will advise him on how to tackle the pandemic once he takes office. The group is compromised of veteran public health experts and well-respected former government officials.

Biden said the group will develop plans for "making rapid testing widely available, and [build] a corps of contact tracers who will track and curb this disease while we prioritize getting vaccinations first to the most at-risk populations" as well as "clear and detailed guidance and providing the necessary resources for small businesses, schools and child-care centers to reopen and operate safely and effectively."

READ:  Some Lessons for America in How Elections Go Off the Rails

Because the General Services Administration has yet to certify Biden the winner of the election, his team can’t begin working with federal agencies on the transition, including the implementation for a new approach to the pandemic.

So as the pandemic rapidly worsens, there’s little Biden can do at the moment other than use his platform, as he did on Monday, to call on the public to take necessary precautions to slow the spread of the virus.

Americans living through the pandemic are now “called to do the same thing that generations of proud Americans have done in the face of a crisis throughout our history,” Biden said. “Rise above our differences to defend the strength and vitality of our nation.”