The president’s first news conference on Thursday was notable for what wasn’t asked. 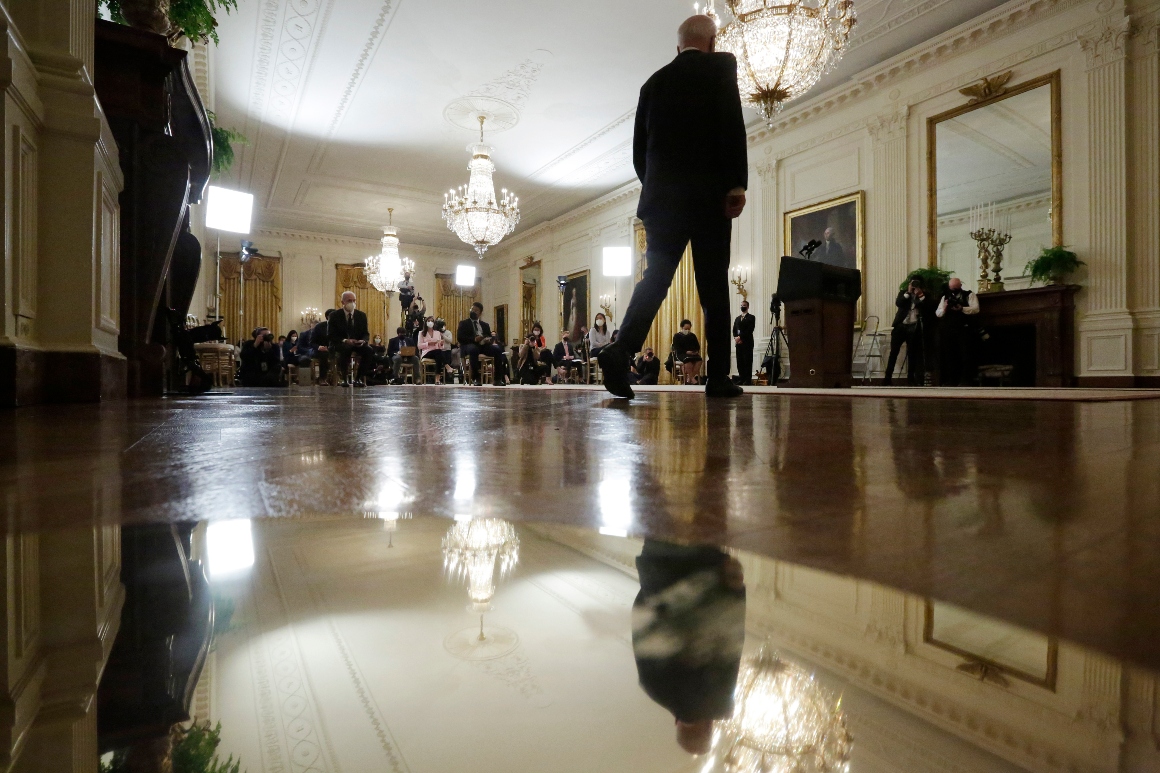 During the first news conference of his presidency, Joe Biden was never asked about the defining crisis of this generation and, in all likelihood, his time in office.

Over the course of 62 minutes on Thursday, the Covid-19 pandemic never arose, except for in the president’s remarks at the start of the event, touting the accomplishments his administration has made in the U.S.’s yearlong fight.

The absence of the issue from the news conference illustrates the degree to which a host of other challenges have begun to dominate Biden’s time in office: a surge of migrants crossing the southern border, back-to-back mass shootings and efforts to restrict voting in statehouses.

Some Democrats were incensed that Covid never came up. But others, including Ron Klain, the White House chief of staff, publicly pushed the notion that the lack of discussion was merely a reflection of Biden’s discipline in handling the pandemic. The president and his team have set expectations low and routinely cleared them, all the while trying to create a deliberate contrast with the chaos that defined the four years of Donald Trump’s presidency.

When Biden emerged in the ornate East Room to address the media, he announced that he was doubling his vaccination goal — from 100 million shots administered in 100 days to 200 million — because of that early success. “I know it’s ambitious, twice our original goal, but no other country in the world has come close … to what we are doing,” he said.

From there, the pandemic was not mentioned again.

As he ventured on to other topics, Biden tried to maintain that discipline he’d brought to the pandemic, largely with success but with some notable hiccups.

He called on 10 socially-distanced reporters, mostly from high-profile, mainstream newspapers and networks, though conservative and liberal outlets were present, including Newsmax, Huffington Post and Sinclair Broadcasting.

They peppered him with question after question about the rush of migrants seeking refuge at the border, which has drawn criticism from Democrats complaining about the treatment of children in crammed shelters and Republicans who blame him for rescinding Trump policies, which they say caused the influx.

“I make no apologies for ending programs that did not exist before Trump became president that had an incredibly negative impact on the law, international law, as well as on human dignity,” Biden said.

They also asked about whether he would support changes to the filibuster that could pave the way for the Senate to allow uncodumented immigrants to gain a legal path to citizenship, restrict firearms and expand voting access across the nation.

"If we have to, if there's complete lockdown and chaos as a consequence of the filibuster, then we'll have to go beyond what I'm talking about,” he replied.

Inside the room, which was limited to 30 seated reporters due to the coronavirus, Biden, clad in a dark suit, stood at a lectern, calling on reporters from a list in front of him. A self-proclaimed “gaffe machine,” he had no notable slip-ups. But he did stop his answers short at several junctures and notably flipped through notes as questions were being asked of him.

Biden had waited more than two months to answer questions from reporters in a formal setting in a break from his most recent predecessors, who held one within a month. At this point, Trump had held one solo news conference and four alongside foreign leaders. Barack Obama had held two and George W. Bush had participated in three.

Biden’s answers were, at times, long-winded — a less professorial version of his former boss, Obama, who famously took his time in responding to questions. It was certainly different from Trump, who was notoriously unscripted, calling on reporters who his staff had not selected and announcing policies that his staff had not vetted or even known about.

In his first news conference, a 77-minute made-for-TV event, Trump attempted to deflect attention from Russian interference in the election and questions about his ability to govern, criticizing the media exchanges with a group that he dubbed “the enemy of the people.”

By the time Biden had taken his last question, the critiques from fellow Democrats began pouring in over the lack of discussion about a pandemic that has claimed 540,000 lives to date. For Team Biden, it all felt quite familiar.

“It’s the same persistent disconnect we saw between Twitter and newsrooms on the one hand and voters on the other,” said a former Biden campaign aide. “The questions are too often motivated by what personally entertains cable news panelists — like trying to predict the outcome of the 2024 GOP primary. When superficiality crowds out the top issue to the American people ... that’s a real failure.”

Chris Cadelago contributed to this report.