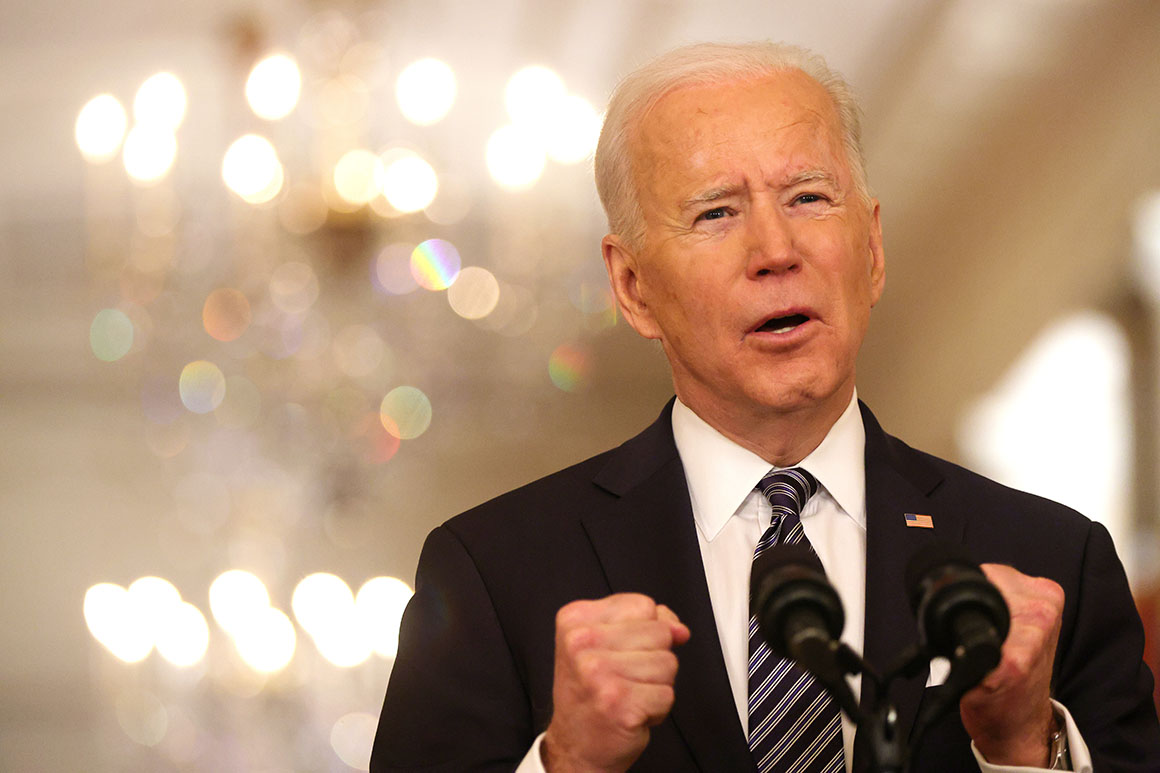 President Joe Biden has a plan to tackle the rush of migrants at the southern border. But the White House knows implementing it will be political torture, sparking anger from left, told-ya-sos from the right, and endangering any slim hope for immigration reform.

The bind is one that the president and his team recognizes has no quick solution. But, for now, they are looking at a number of new proposals and ideas.

Among them, they are searching for emergency shelters for minors traveling alone across the border and activating the Federal Emergency Management Agency, according to four people briefed on the plans. They are also considering placing Health and Human Services staff at the border to more quickly assist children, and looking for ways to more quickly vet adults who could take care of those kids, including waiving fingerprint requirements in lieu of background checks, those briefed on the plans said.

Already, the administration has asked for $4 billion over four years to tackle the root causes of migrations in Central American countries and restore a program that will allow some Central American children to apply for admission to the country. They’re also paying to transport children to their sponsors’ homes, administering vaccines to border workers and streamlining background checks for shelter employees. This week, Biden was briefed by top officials he dispatched to the border.

The moves are designed to alleviate some of the pressure the White House now faces over a situation that even allies say is becoming a crisis. It is, to a degree, a familiar place for a president to be. Biden’s predecessors had to address surges in migration at the Mexican border, too.

But what makes the current situation unique is the political context in which it is occurring: with Democrats wary of repeating the Obama-era deportation-heavy approach and Donald Trump’s policy of separating migrant children from their parents fresh in Americans’ minds. Whatever step Biden takes, confidantes predict, the criticism against him will be fierce.

“The headwinds now making it more difficult are coming from both directions,” said a former Biden adviser. “It is among the hardest challenges for the federal government because the law is insufficient, the resources are insufficient, the politics are terrible on both sides usually because of misinformation.”

Already Biden has felt that pinch. When reports surfaced that the administration opened a new shelter for children, some Democrats quickly compared his administration’s actions to Trump’s, who took a hard line against both illegal and legal immigration to the U.S.

“This is not okay, never has been okay, never will be okay — no matter the administration or party,” Rep. Alexandria Ocasio-Cortez (D-N.Y.) said about the emergency shelter for children.

White House officials said the comparison was unfair. But as they fended off critiques from the left, they also faced attacks from the right, with Republicans accusing Biden of not being able to control the surge at the border. They’ve argued that his public embrace of a more “humane” immigration policy sparked a flood of migrants. And they’ve signaled plans to use the issue to try to retake Congress in 2022. House Minority Leader Kevin McCarthy will travel to the border next week with a dozen Republican members.

“The situation is becoming untenable every day that passes without a coherent plan to address this crisis,” House Oversight Committee Republicans wrote in a letter to DHS.

The White House has argued that problems on the border could be solved through the passage of Biden’s expansive immigration legislation. And, elsewhere in the immigration advocacy community, there was hope that the current situation would prompt lawmakers to tackle broader reform. But privately, some Biden allies worry that the current situation will make it even harder to move that bill, which provides a pathway to citizenship for 11 million undocumented immigrants. It already faced dim prospects for becoming law with narrow Democratic majorities in both chambers.

“Republicans are eager to use it to not do something,” the former adviser said.

The White House, Customs and Border Protection and Department of Health and Human Services did not respond to questions. But administration officials have spent considerable time pushing back against the criticism of their handling of the situation along the border.

"I think, when you look at the issue of mixed messages, it is difficult at times to convey both hope in the future and the danger that is now,” said Roberta Jacobson, coordinator for the Southern Border, at a recent White House briefing. “And that is what we're trying to do."

Biden campaigned on overhauling Trump policies and creating a system where immigrants — from refugees to high-skilled workers — are more welcomed. He has introduced a massive immigration package and put in place a series of executive orders to achieve that end. But, elsewhere, he’s been hampered by the byzantine and often-conflicting immigration laws and policies currently in place. After he was sworn into office, he pleaded with immigrants to not come to the U.S. because the programs needed to handle the influx were not ready yet. Still, they’re coming.

Department of Homeland Security officials have long expected immigration at the border to increase this year following a spate of hurricanes in Central America, the pandemic-induced economic downturn and Trump’s departure.

“He moved in a much more humane direction in the campaign,” Rep. Don Beyer (D-Va.) said. “I thought he was trying to thread the needle well. But I think even if he had said nothing you were going to get an … effect because he wasn’t Donald Trump.”

Biden’s team began talking about and preparing for the influx in migrants during the presidential transition. But those familiar with the preparation said there was only so much they could do without being in office.

“It’s logistics and capacity,” said an immigrant advocate who speaks to the White House. “You can’t solve this in weeks. You need months. They just need time to figure out.”

The majority of migrants crossing the border are single adults who the Biden administration is turning back because of coronavirus restrictions initially put in place by Trump. Overall, there were about 100,000 southwest border “encounters” in February 2021, a substantial increase in the number of apprehensions in February 2019 (76,545) and 2020 (36,687).

But the Biden administration has decided to let children crossing the border into the country to stay for humanitarian reasons. Nearly 9,500 unaccompanied children were detained at the border in February, up from more than 5,800 the prior month, Troy Miller, the acting commissioner of Customs and Border Protection, announced this week. Detentions of the minors more than doubled in February compared to the same month last year.

The children are required by law to be processed by CBP within 72 hours before they are sent to HHS-run shelters. But the administration is exceeding those times, because the sheer number coming in is taxing resources.

The administration reopened an emergency shelter in Carrizo Springs, Texas, that can hold up to 700 children. It is considering other shelters in Homestead, Fla., Fort Lee, Va. and Mountain View, Calif., among other locations around the country. The administration last week directed shelters to return to their pre-pandemic capacities.

Trump-allied officials used the opening of such shelters to accuse the Biden administration of both hypocrisy and naivete on immigration policy, much as they did in 2014 when Obama faced a surge in migrant children at the border as well. But, in a reflection of the tug and pull he now faces, immigration advocates are worried that the current plans don’t go far enough in protecting unaccompanied minors.

“We would much rather see children in smaller facilities or foster care families for the short time they need to be government custody,” said Leah Chavla, a senior policy adviser in the Migrant Rights and Justice program at the Women’s Refugee Commission. “We’d really like to see them reform the system and really focus on smaller better places for kids and improving the process overall.”