On his 100th day in office, the president rallies supporters on a trip to Georgia. 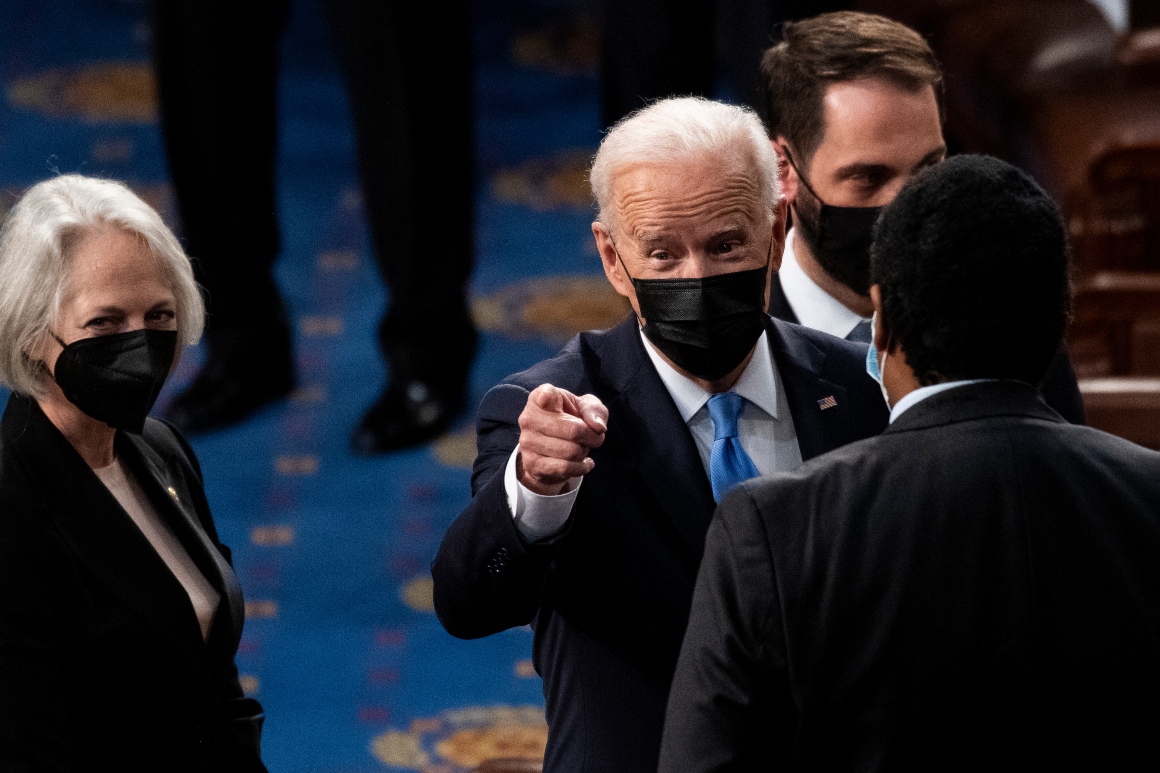 President Joe Biden marked his 100th day in office at a celebratory pandemic-induced car rally outside Atlanta to promote his $4 trillion spending proposals designed to redistribute the nation's wealth and lift millions of Americans out of poverty.

More than 300 cars gathered at the Infinite Energy Center in Duluth with mask-clad attendees honking horns. A huge American flag was held up by a pair of construction vehicles at the back of the parking lot. Signs read “100 Days” and “Getting Back on Track.”

“In the 21st century, infrastructure isn't just steel and concrete. It's people,” said Biden, who removed his mask to speak. “It’s a once-in-a-generation investment in America.”

Republicans have been resistant to the two proposals: the American Jobs Plan, a sweeping $2.3 trillion package designed to fix the nation’s crumbling roads and bridges, create jobs and tackle climate change; and the American Families Plan, a $1.8 trillion plan to fund Democratic priorities, including billions of dollars on child care, prekindergarten, paid family leave and tuition-free community college. He would pay for the packages by increasing taxes on wealthy Americans and corporations.

“The middle class and working people of this country are already paying enough in taxes,” he said. “It’s time for the richest 1 percent of Americans and corporate America to start to do their part.”

Republicans have resisted both of Biden’s big spending plans, expressing concerns about the price tags, the proposed tax hikes on wealthy Americans and corporations, and the generational, historic expansion of the social safety net.

Some Democrats have hinted they would like to proceed with what they can pass without Republican support but the White House says it is trying to work with Republicans. Biden aides say the president hopes to make progress on both spending bills by Memorial Day and sign them into law this summer. Speaker Nancy Pelosi has suggested the House could vote on at least one by July 4.

Biden flew to Georgia following his first speech to Congress on Wednesday, just one day shy of his 100th day in office, which was focused on getting Americans vaccine shots.

It was his second visit to Georgia, the state that gave Democrats the narrowest of majorities in the Senate. Just six weeks ago, Congress passed the American Rescue Plan that sent $1,400 checks to Americans, increased enhanced unemployment benefits and pumped billions of dollars into vaccine distribution and reopening schools. It passed without Republican support.

“We owe a special thanks to the people of Georgia. Because of you, the rest of America was able to get help,” Biden said. “If you ever wonder if elections make a difference, just remember what you did here in Georgia. … You changed America."

Biden’s first visit to promote the coronavirus recovery bill was hastily altered after a series of shootings at Atlanta-area spas that killed eight people, including six Asian women. Thursday’s visit comes after the passage of the state’s contentious voting law, which Biden has dubbed the “Jim Crow in the 21st century” and “a blatant attack on the Constitution.”

At the car rally, Biden gave a shoutout to Stacey Abrams, former Democratic gubernatorial candidate, who he said "could be anything she wants to be from whatever she chooses to president." He also touched on a variety of issues, including climate change, police reform and voting rights.

Near the beginning of his remarks, Biden was interrupted by a group of protesters shouting “Abolish ICE” and “End Detention Now.” One shouted, “We voted for you, too.” “Our families are dying,” another said.

“I agree with you, I’m working on it, man, give me another five days,” Biden responded. “Folks, you all know what they’re talking about. There should be no private prisons period. Private detention centers. They should not exist. And we’re working to close all of them.”

Biden was joined by first lady Jill Biden, who introduced her husband. "In some ways it's hard to believe that it's only been 100 days,” she said. “Back in D.C. we're still getting to know our new home, figuring out where the light switches are.”

Before the rally, the Bidens met with former President Jimmy Carter and his wife, Rosalynn, at their home in Plains, Ga.

Carter, 96, did not travel to Washington for Biden’s inauguration in January because of the pandemic, though the two spoke by phone the night before.

“Joe Biden was the first U.S. senator to endorse then former Governor Carter when he ran for president,” Principal Deputy Press Secretary Karine Jean-Pierre told reporters aboard Air Force One. “So they have a longstanding relationship that goes a few decades.”

Benjamin Din contributed to this report.