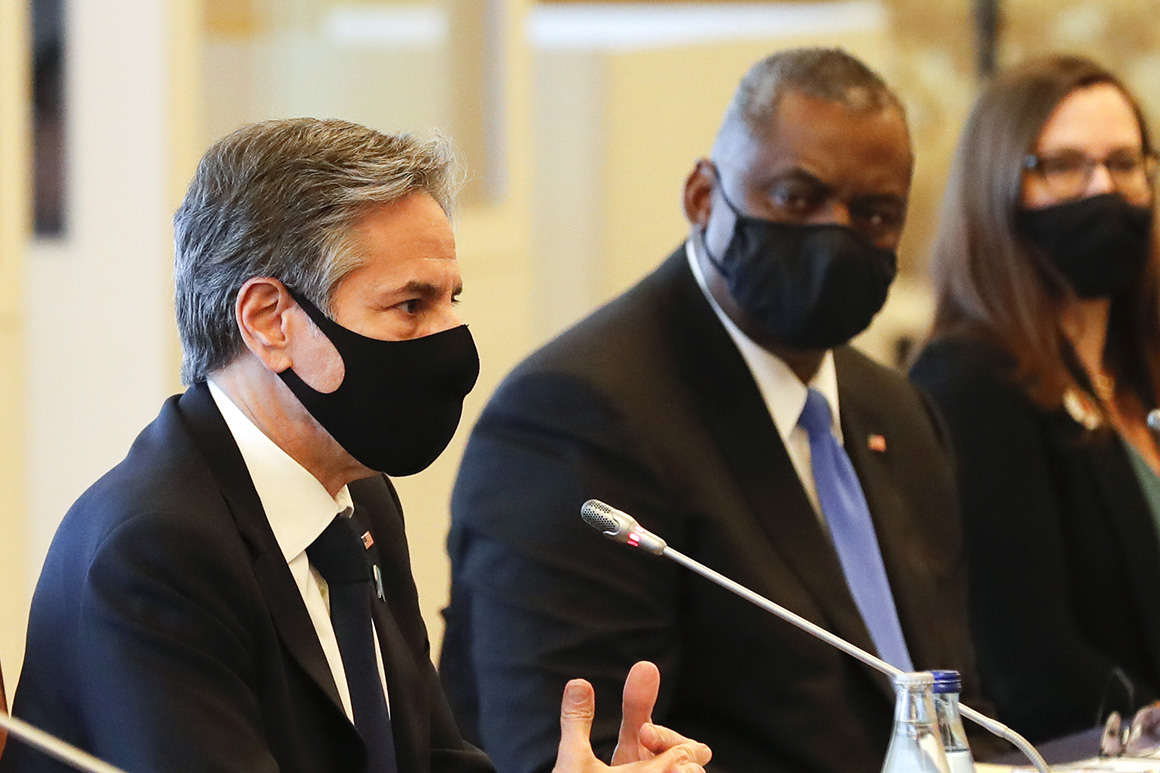 TOKYO — Defense Secretary Lloyd Austin and Secretary of State Antony Blinken wrapped up a visit to Japan on Tuesday before heading to South Korea, as Pyongyang issued a warning to the Biden administration.

As the U.S. and Japanese officials met in Tokyo, Kim Yo Jong, North Korean leader Kim Jong Un’s sister, criticized the United States and South Korea for holding joint military exercises, and warned Washington to “refrain from causing a stink.”

“If they want to have a good night’s sleep for the next four years, it would be good for them not to do things that would prevent them from sleeping properly from the start,” she said in a statement.

The comments, North Korea’s first threats against President Joe Biden’s new administration, are reminiscent of the fiery rhetoric Pyongyang leveled at Washington in the early months of the Trump administration and will likely color the discussions this week in Seoul between Austin, Blinken and their South Korean counterparts.

While North Korea’s continued threat to the region was a major topic of discussion during the Tokyo meetings, the main focus was on countering China’s rise. During the joint meetings, Japanese officials expressed their concern about China’s increasing threat to Taiwan and the disputed Senkaku Islands. Austin relayed to his Japanese counterpart that the Biden administration had communicated its concerns about Beijing's aggressive moves directly to the Chinese government, according to a senior defense official who spoke on condition of anonymity to discuss sensitive meetings.

As Austin and Blinken head to Seoul, the conversations are expected to include the threat from North Korea, especially after Kim Yo Jong’s comments.

The South Korean and U.S. militaries last week began their latest annual exercises, which Pyongyang views as an act of hostility toward the North, although this year’s event was scaled back due to the Covid-19 pandemic. The Trump administration downsized military drills with South Korea after the former president’s historic Singapore summit with Kim Jong Un in 2018 and has continued the smaller events for the past three years.

While Pyongyang did halt its testing of long-range ballistic and nuclear missiles as part of the Singapore agreement, it has continued developing and displaying advanced new weapons, according to a second senior defense official.

Blinken declined to comment on Kim Yo Jong’s remarks during a joint press conference on Tuesday, instead pointing to Washington’s strong partnership with Tokyo as a buttress against both the Chinese and North Korean threats.

The Biden administration in February began reaching out to the North Korean government “through several channels,” but has not yet received a response, Blinken said, confirming a report by Reuters.

A Pentagon spokesperson also declined to comment on the statement or the status of the military drills.

In her statement, Kim Yo Jong also threatened to abandon a 2018 bilateral agreement to reduce military tensions with Seoul, and abolish a decades-old unit tasked with handling inter-Korean relations.

“We will keep an eye on [South Korea’s] attitude and behavior, and if they become more provocative, we could take exceptional measures,” she said in her statement, published in Pyongyang’s official Rodong Sinmun newspaper.

In response to Kim’s comments, a spokesperson for South Korea’s Defense Ministry defended the joint drills as defensive in nature and called on the North to show a more “flexible attitude.”

READ:  The Man Who Made Stephen Miller