TALLAHASSEE — President Donald Trump’s newest Covid-19 adviser on Monday traveled to the swing state of Florida, where he said there is no need to test healthy people for infection and urged the state not to fear the virus, which has killed more than… 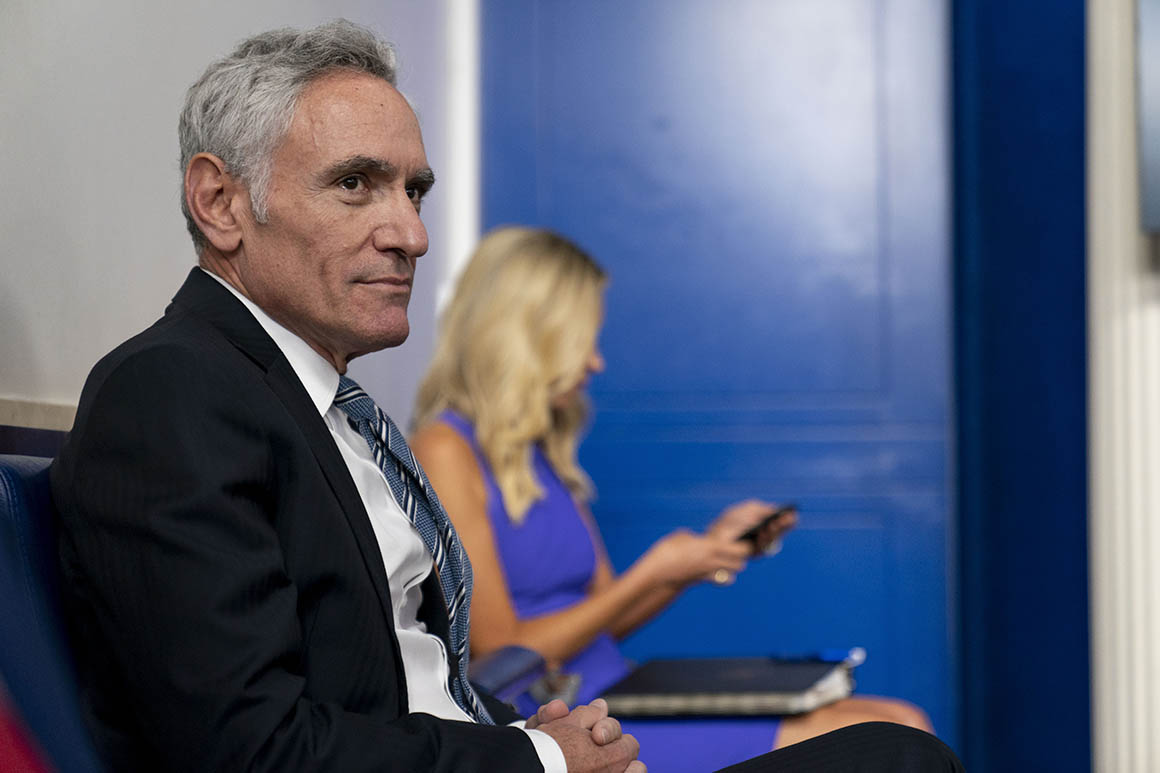 TALLAHASSEE — President Donald Trump’s newest Covid-19 adviser on Monday traveled to the swing state of Florida, where he said there is no need to test healthy people for infection and urged the state not to fear the virus, which has killed more than 182,000 people nationwide and infected more than 6 million.

Scott Atlas, who Trump named to the White House coronavirus task force this month, said people who are asymptomatic don’t require testing for Covid-19. Backing the Republican Gov. Ron DeSantis at a briefing in Tallahassee, Atlas said schools should be open to classroom instruction and college athletes should take the field.

“There is no need to fear at this point,” Atlas told reporters. “We are the only country of our peer nations in the western world who are this hysterical about opening schools.”

Atlas’ visit to the political battleground state two months before Election Day comes as Trump and DeSantis take heat for their light-touch approach to coronavirus safety. Both Republicans were slow to endorse mask use and have taken a hard line on opening schools and businesses. DeSantis has also heard criticism from business leaders saying the coronavirus restrictions could lead to massive layoffs by the end of the year.

Atlas has painted a rosier picture of the pandemic and his comments Monday give political cover to the president in a must-win state. Atlas and DeSantis later today are scheduled to visit The Villages, a heavily Republican central Florida retirement community.

The nationwide testing effort was meant to protect the elderly and the medically vulnerable and not to document people who are asymptomatic, Atlas said, departing from a position taken by DeSantis, who has said that testing people — whether they have symptoms or not — would help stop the spread of the infection.

READ:  Democrats to Biden: Go big on executive actions, even with Senate control

“When you start a program of testing, simply to detect positive cases among asymptomatic low-risk, it proves that really the only outcome is to close the schools,” Atlas said. “And the goal of testing is not to close things.”

Atlas aligned with DeSantis on re-opening K-12 campuses and universities and shared the Republican governor’s belief that college sports should carry on despite the pandemic. He warned of the educational risks of students missing school and said families shouldn’t buy into fear.

The coronavirus poses a low risk to children, Atlas said, noting that Canada, Italy, Spain and other countries are opening schools.

He said there is a misplaced emphasis on positive Covid-19 tests among low-risk individuals, including college and K-12 students.

Communities depend on revenue from college sports and could go broke without them, Atlas said, jumping on a point DeSantis has attempted to drive home. The decision to cancel fall sports should be revisited, he said.

“This shouldn’t really be a point of controversy,” Atlas said.

Monday marked the start of classes for the remaining school districts that had yet to reopen. Across Florida, about 1.6 million students have signed up for face-to-face instruction and 1.4 million are enrolled in online courses, according to the Department of Education.

Monday marked a major shift in strategy DeSantis has taken toward mitigating the spread of the coronavirus, which has killed 11,187 people in Florida and infected 623,471 since March, according to a Florida Department of Health report published Monday.

Until May, Florida tested only people with symptoms. That month, testing was expanded to everyone as DeSantis began lifting statewide restrictions on restaurants, bars and stores.

READ:  Your Guide to an Election Gone Bad

The reopenings led to a resurgence of infections by mid June. Since then, more than 8,000 people have died and 550,000 new infections had been reported as of Monday, state Department of Health data shows.

Roughly half of those killed during the summertime spike were residents of nursing homes and assisted-living facilities. Workers at those facilities carried Covid-19 to patients, leading to at least 10,000 infections among the elderly and medically vulnerable.